Halloween weekend is here! Have you carved your pumpkin yet? Do you already have a costume to wear? The scariest night of the year is approaching fast, and we have taken this chance to scan the Artworld for the most disturbing art out there. If you’re not in a gloomy mood yet, these gory artworks are sure to get you there! (What’s that in the mirror behind you…?!) 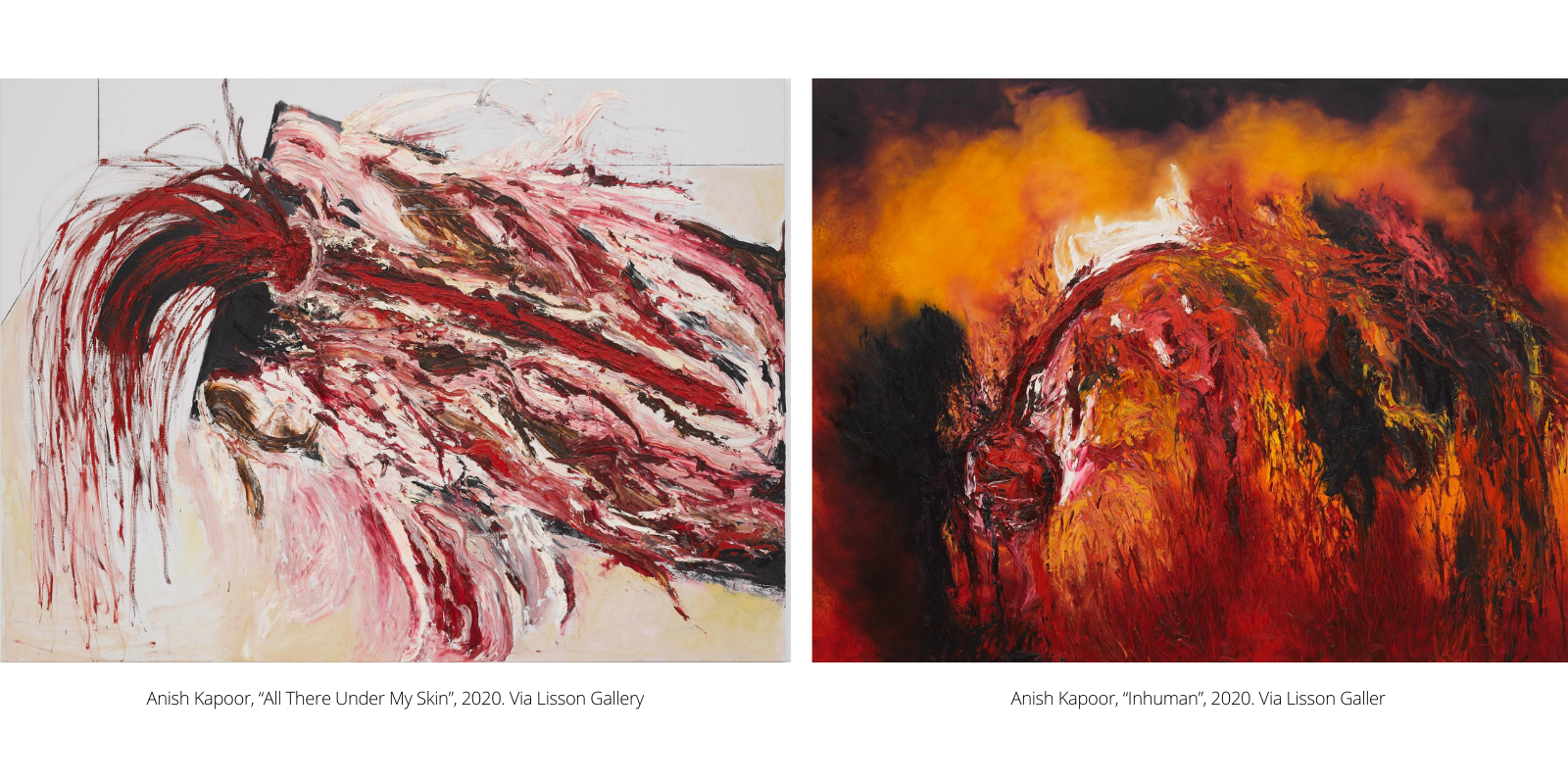 While Anish Kapoor is mostly known for his massive sculptures such as his installation the Cloud Gate, (also known as The Bean) which is based in Chicago, his latest exhibition at Lisson Gallery in London, which presents a new series of paintings created during the pandemic, shows a more sombre side of the artist. These daunting paintings, with their vibrant red colours and explosive motifs, evoke disturbing images of flesh and blood. While they’re more abstract than figurative, we can’t help but glimpse something quite inherently grotesque in between the brushstrokes. This exhibition also has some sculptural installations, and quite frankly, we cannot decide which one freaked us out the most: the paintings or the sculptures… we will let you decide!

This exhibition is closing just before Halloween night (Saturday October 30th), so you better make sure you rush if you want to see it! 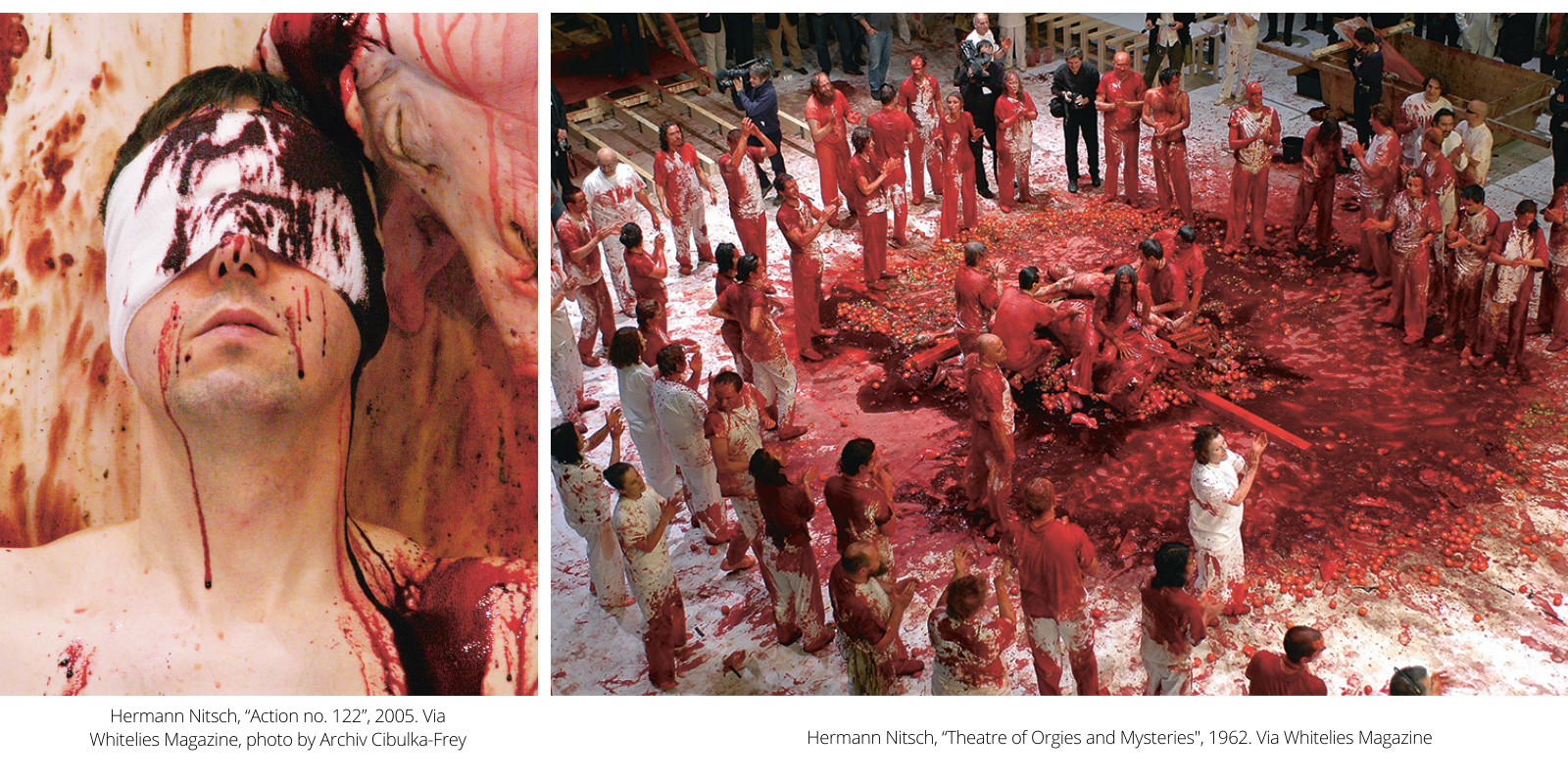 “I never wanted to provoke. I desired intensity. I was aware that people are going to get upset. (...) My intention was always to implement intense art and intense theatre.”

Hermann Nitsch in interview with Whitelies, 2017

He is quite a controversial artist, and he made it to prison a few times throughout his life for breaking the law in his boundary-breaking artworks. While his work might not be for the more impressionable art lovers out there, its gory dimensions might indulge those who enjoy intense art experiences that challenge their senses. Definitely Halloween-adequate! 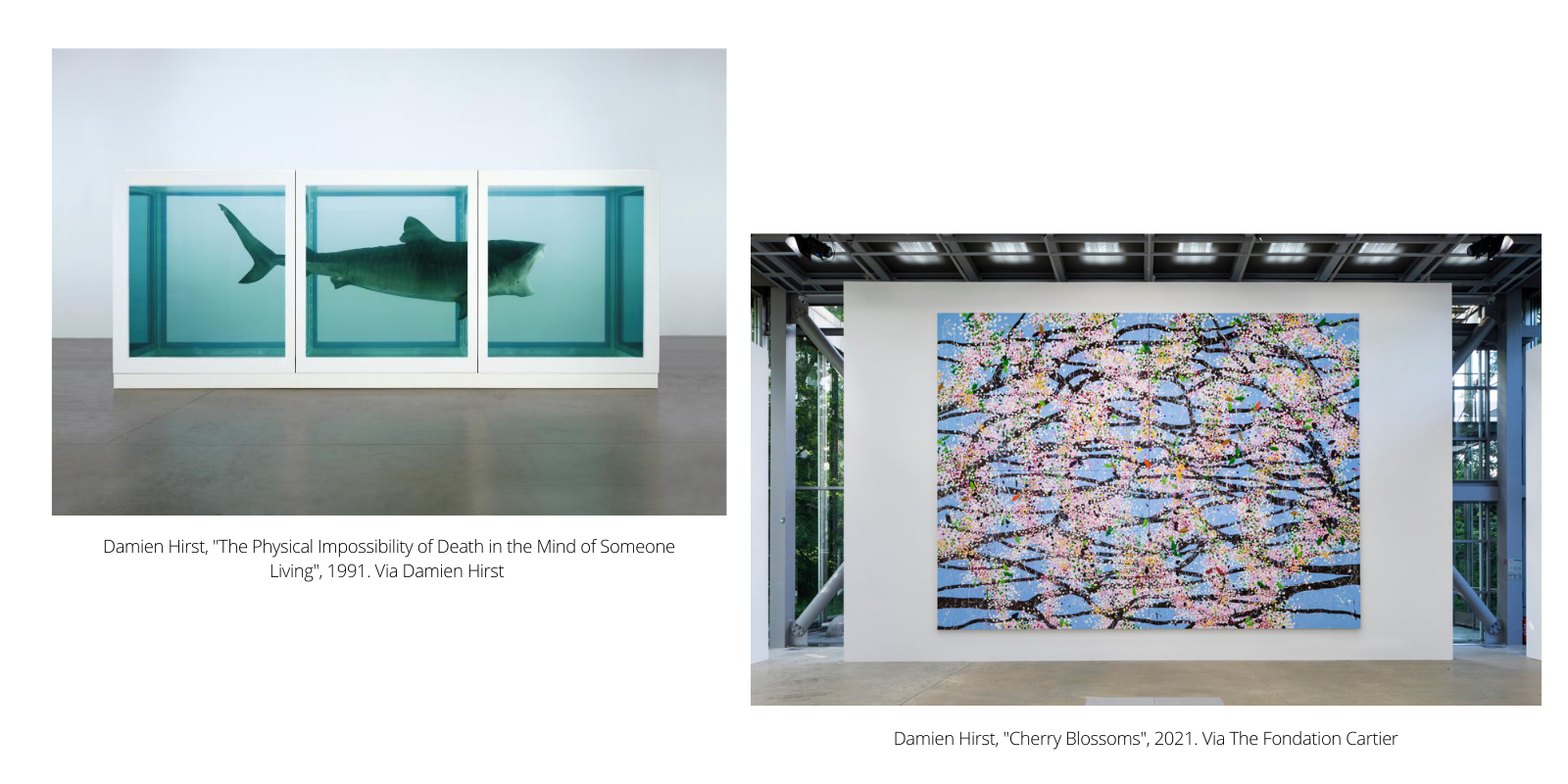 Damien Hirst has been on Artscapy’s radar lately for his NFT work: ‘The Currency’, which features polka-dot-like patterns in a million lively colours. The versatility of Hirst’s artistic practice does however go far beyond this lively spectrum of polka-dots into works which are much more sombre in character. You could almost say his various bodies of work only seem to operate at the extreme ends of the uplifting and gory spectrums - a taste of what Hirst personality is really about... We bet you did not understand a thing of what we just said, but we can explain! Damien Hirst, the leader of Young British Artists, is most notoriously known for his (real, life-sized) shark inside a large glass container, also titled Physical Impossibility of Death in the Mind of Someone Living (1991). His almost clinical style paired with his interest in both life and death, along with the happiness extracted from his Cherry Blossoms (2021), leaves the viewer extremely intrigued - hence his popularity! Now that you know the background, you can kind of understand why we think Hirst fits in this Halloween vibe like a glove! 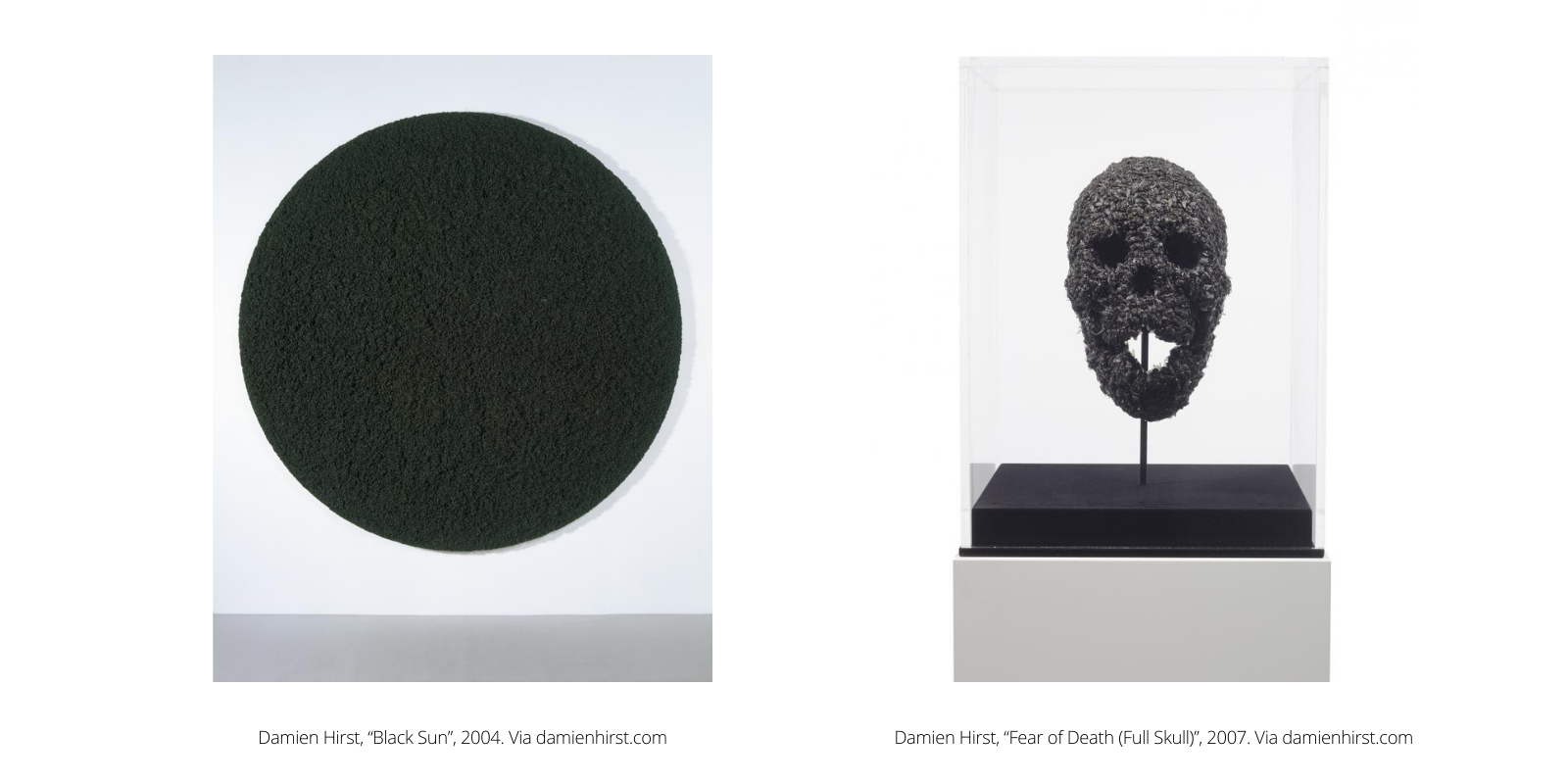 We have selected two particularly disgusting artworks for this list: Black Sun (2004) and Fear of Death (Full Skull) (2007). Damien Hirst really pushed the boundaries of disgusting materials with his series of fly artworks, pieces made of flies (yuck!) and resin. Although these may seem like completely normal artworks, once you get close… Well, maybe it’s not even a good idea to get close - just a tip! 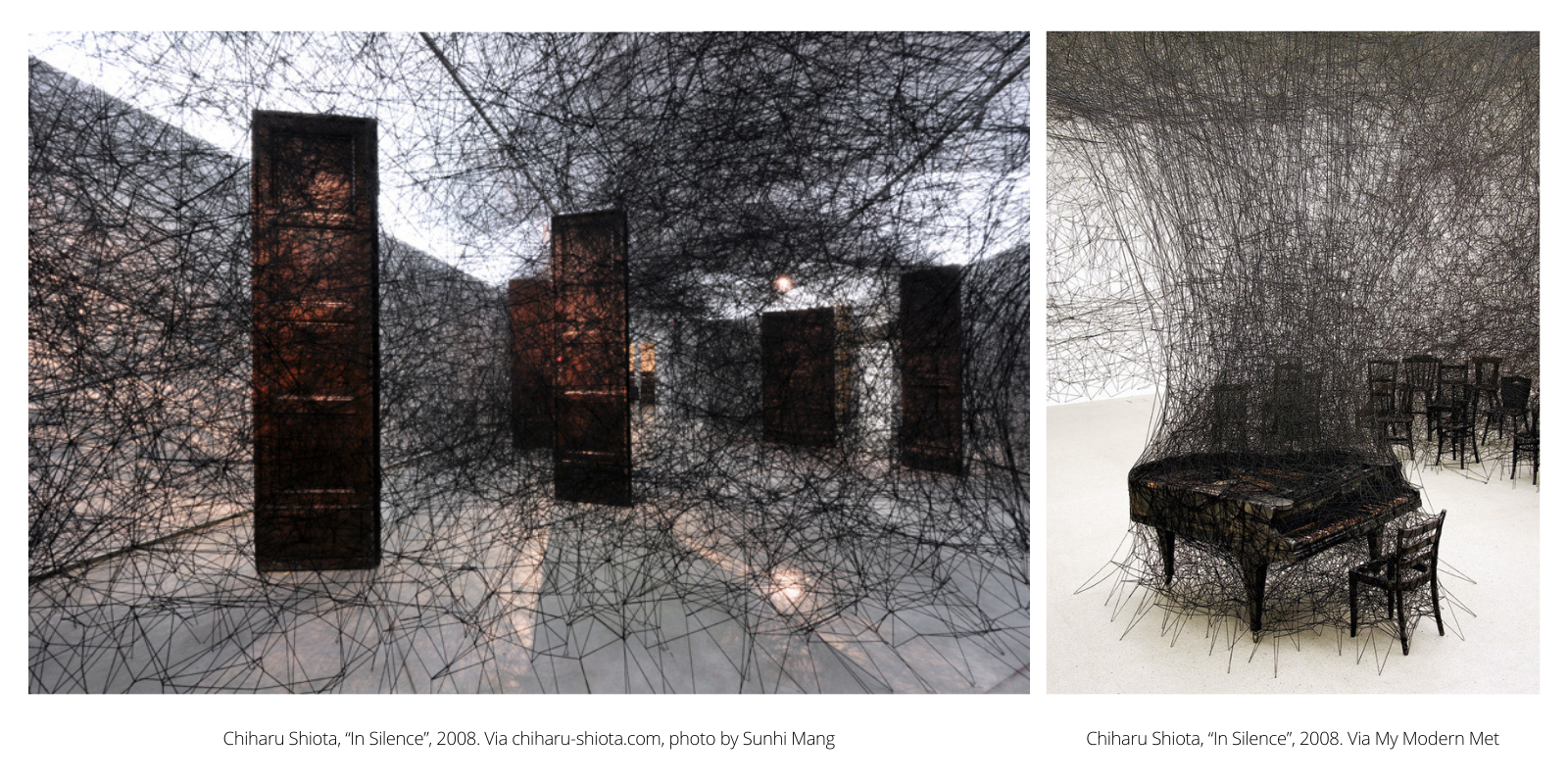 If this site-specific installation by Chiharu Shiota was available for rent… wouldn’t it make for the perfect Halloween party venue? Shiota creates installations by surrounding everyday objects with threads of interwoven wool, making them seem lost in another dimension... In Silence (2008) looks like a massive black web, and we can almost hear evil spiders crawling around the grand piano playing chilling songs… This artwork manages to be equally beautiful and spooky - just observe how intricate the strands are! We’re truly impressed by this one! 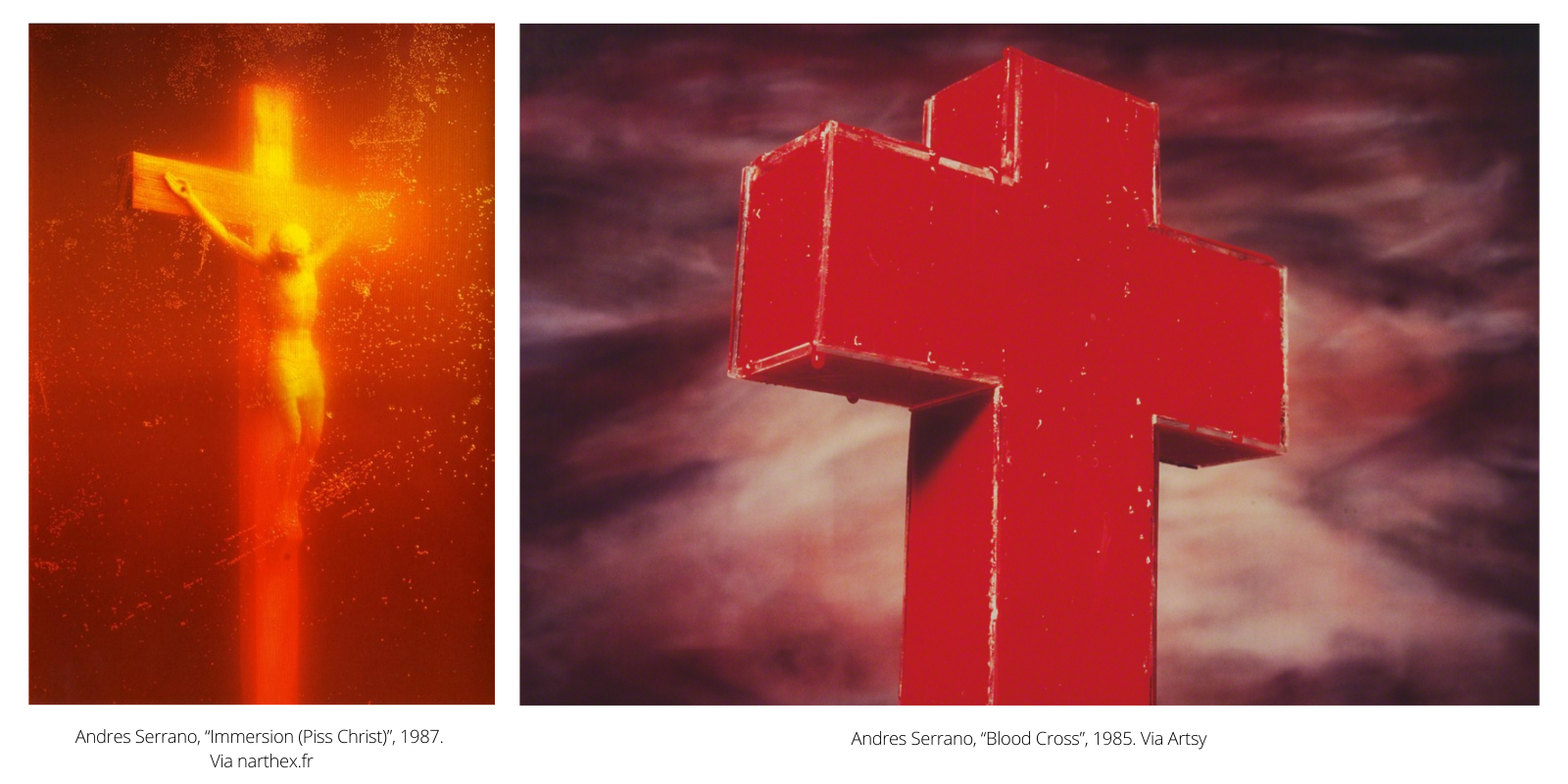 Andres Serrano is known for addressing uncomfortable subjects in his artworks, such as the Ku Klux Klan (hate organizations that employed terror in pursuit of their white supremacist agenda), dead bodies, faeces, gory Catholic figures and many other controversial topics. Immersion (Piss Christ) (1987) is a perfect example of a disgusting work made by Serrano, which, at first, might seem just like any other close-up photograph, but once you understand what is behind that photograph your whole perspective changes. Can you pinpoint what feels so wrong about this photograph? Let us enlighten you! In Immersion (Piss Christ) , a plastic crucifix is seen submerged in Serrano’s urine - yes, that’s right! It created a fair amount of controversy, particularly amongst Christians who saw this piece as utterly offensive. It even managed to attract protests and start a debate on US public arts funding. Blood Cross (1985), showing a plexiglass cross covered in cow’s blood, was also on our shortlist but we felt Piss Christ had the edge… 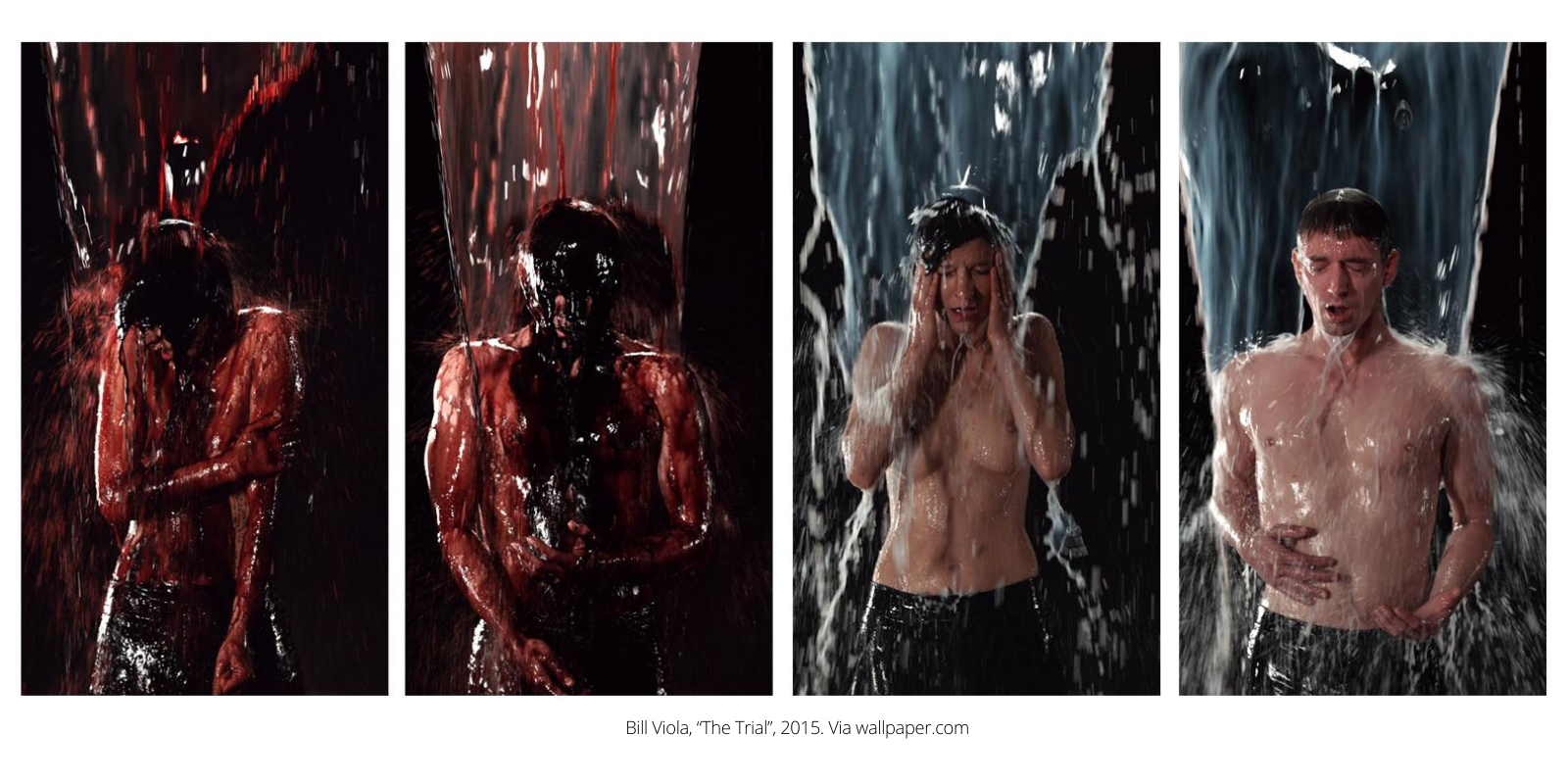 You might have heard about Bill Viola’s sound and video artworks centring on birth, death, and the frightening experience of ‘life in-between. For a moment it may have sounded a bit like Damien Hirst mark two; because in terms of the subject, there is indeed a resemblance! His performance piece The Trial (2015) starred two actors being inundated with different kinds of liquids (yes, blood was involved!), a metaphor for what going through life feels like. In order to get their most raw reactions Viola did not reveal to the actors the different stages they would face, which made the performances startlingly real. Do you reckon you would make it out alive? 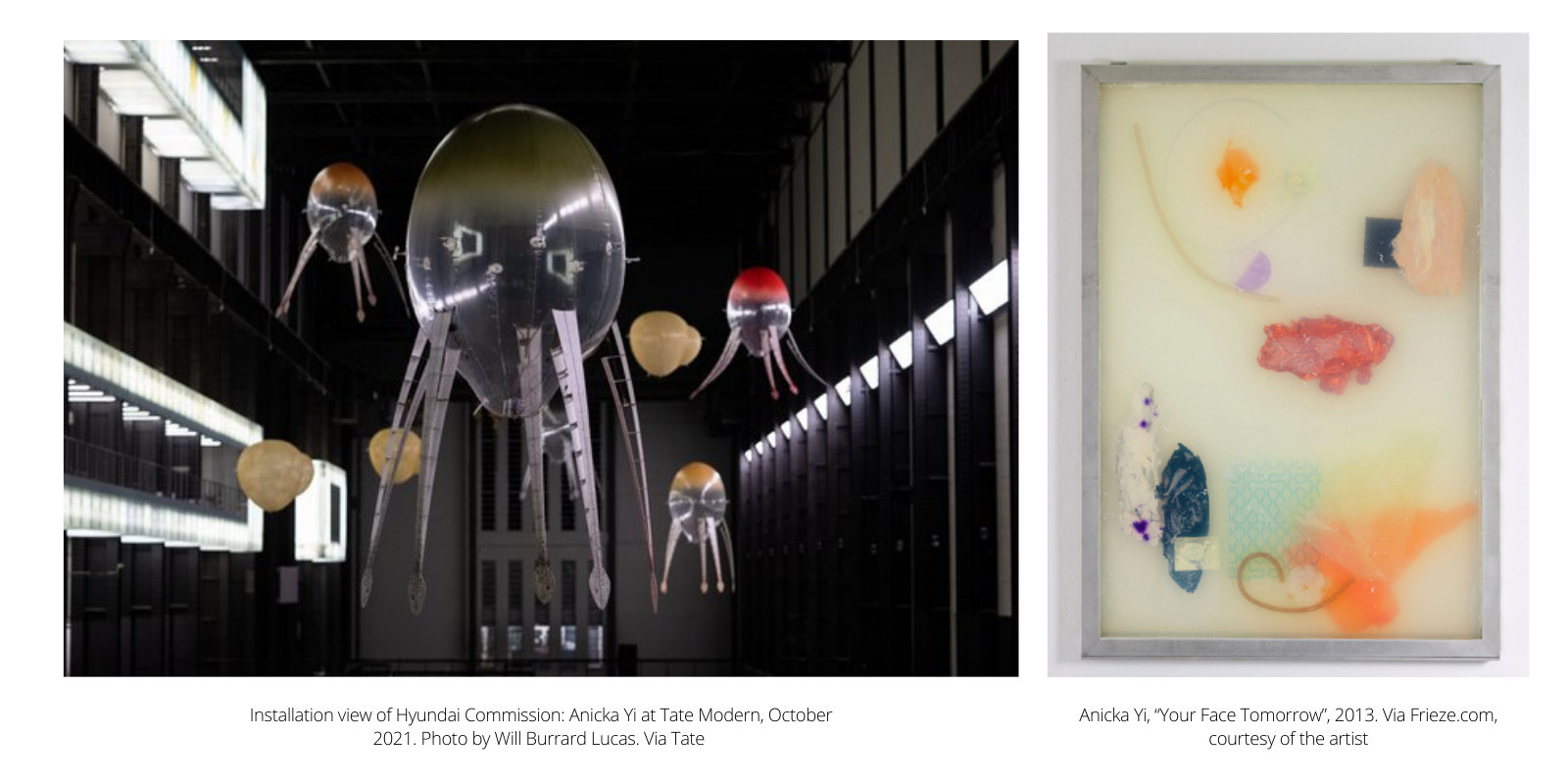 Last but not least - have you heard of ‘olfactory art’? Neither had we until we encountered the olfactory installations of Anicka Yi. Yi’s pieces interact with the public by playing with smells and odours, using unlikely materials such as sweat and bacteria (sounds quite gross, right?). It is not a secret that the sense of smell is the most powerful one when it comes to activating past memories and taking us back to a specific time and place. That is why visiting one of Yi’s exhibitions might prove to be a lot more intense than you imagine. Lucky for you, the artist is exhibiting soon at Tate Modern in London, so you can check for yourself!

We hope we got you in the mood for a creative Halloween this year! Though, be very careful to not be arrested just like Nitsch did in his early years.

What do you make of all these weird artworks? Did you find any treats amongst them? Or did they feel more like tricks to you? We would love to see any artsy costumes you come across on the scariest night of the year - so please share them on your feed! Artscapy wishes you a very creepy Halloween!