In a pandemic world suspended between fear and uncertainty, no one has gone untouched. The artistic practices of many during this time period have certainly reflected this. In this light, we have recently discussed how Anish Kapoor’s new body of work exposes many of our underlying fears, whilst Hugo McCloud’s The Burden of Man: Waiting to Breathe, (2021) is also a poignant reminder of how the politics around the access to, and the sheer lack of, oxygen has divided people between hope and hopelessness.

In a similar vein, Pejac’s long awaited solo exhibition, Apnea, which was postponed twice due to the pandemic, describes in both title and in body of works, another artist’s perspective of living through this period, offering a sensitive reflection of the impact it has had on the world.

From the Greek word of ‘Apnous’, meaning ‘breathless’, the 45 works displayed touch on several recurrent themes that have come to be known in Pejac’s rhetorics: from environmental critique and predictions, to relations between human beings and mass production, and ultimately onto human relationships themselves.

In this exhibition, Pejac once again makes us question life priorities and their interconnection with the fragility of the environment, of the animal realm, and of humanity. In this article, Alex, co-founder of Artscapy, takes us on his tour around the exhibition and offers us his thoughts. 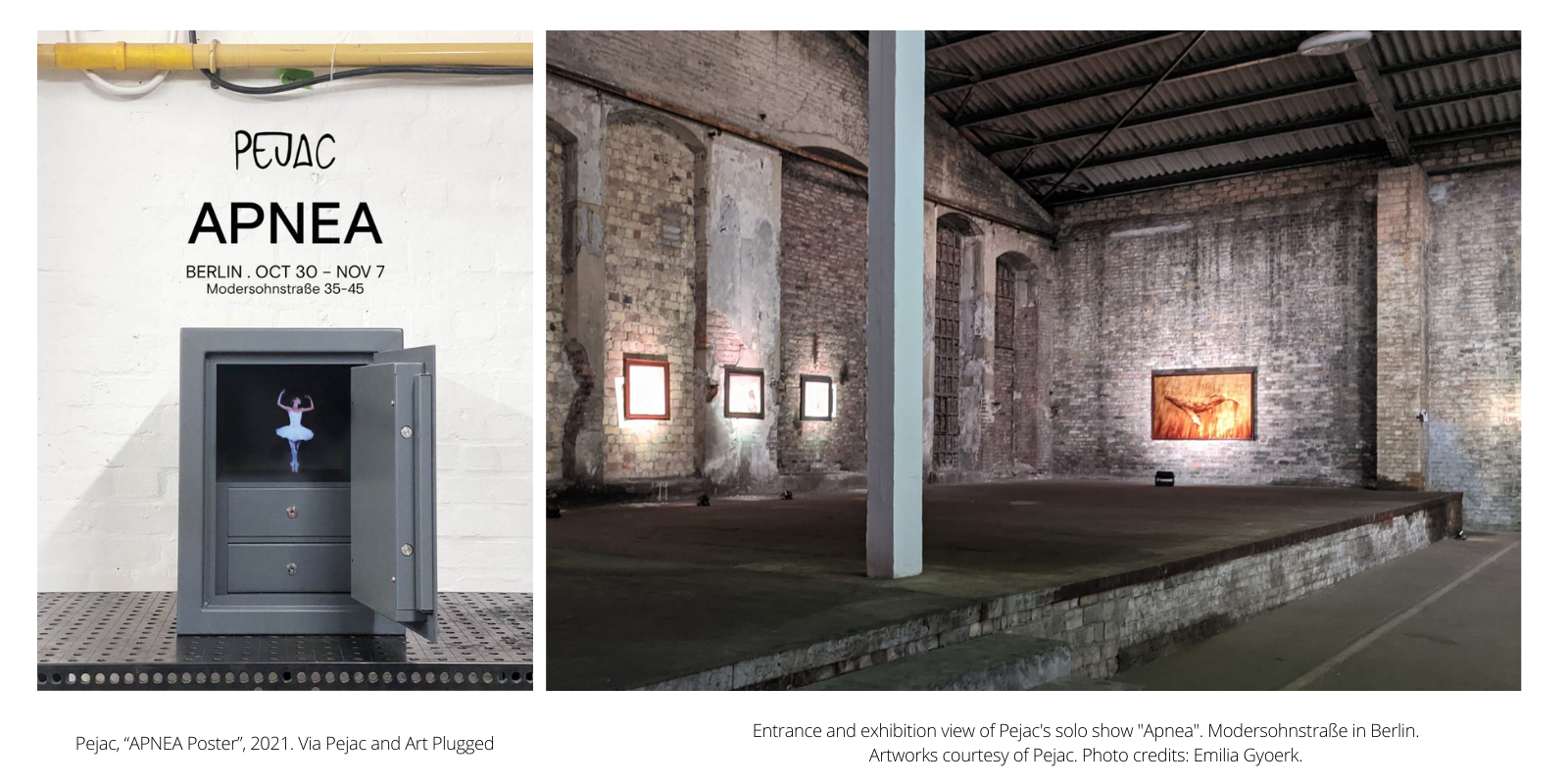 As I was approaching the entrance of the show, located in a former industrial site, I wasn’t sure what to expect, neither in terms of the locale nor the experience itself.

Upon entering the venue, and being instantly met by the playful reference of a pinata, with an intriguing scatter of a pointillistic pattern on the floor below, I was immediately taken by the feeling that this would be a special show. Nearing the colour explosion, you start to see that this isn’t some random splatter, but indeed a clever revival of the iconic A Sunday on La Grande Jatte (1884) by Georges Seurat. 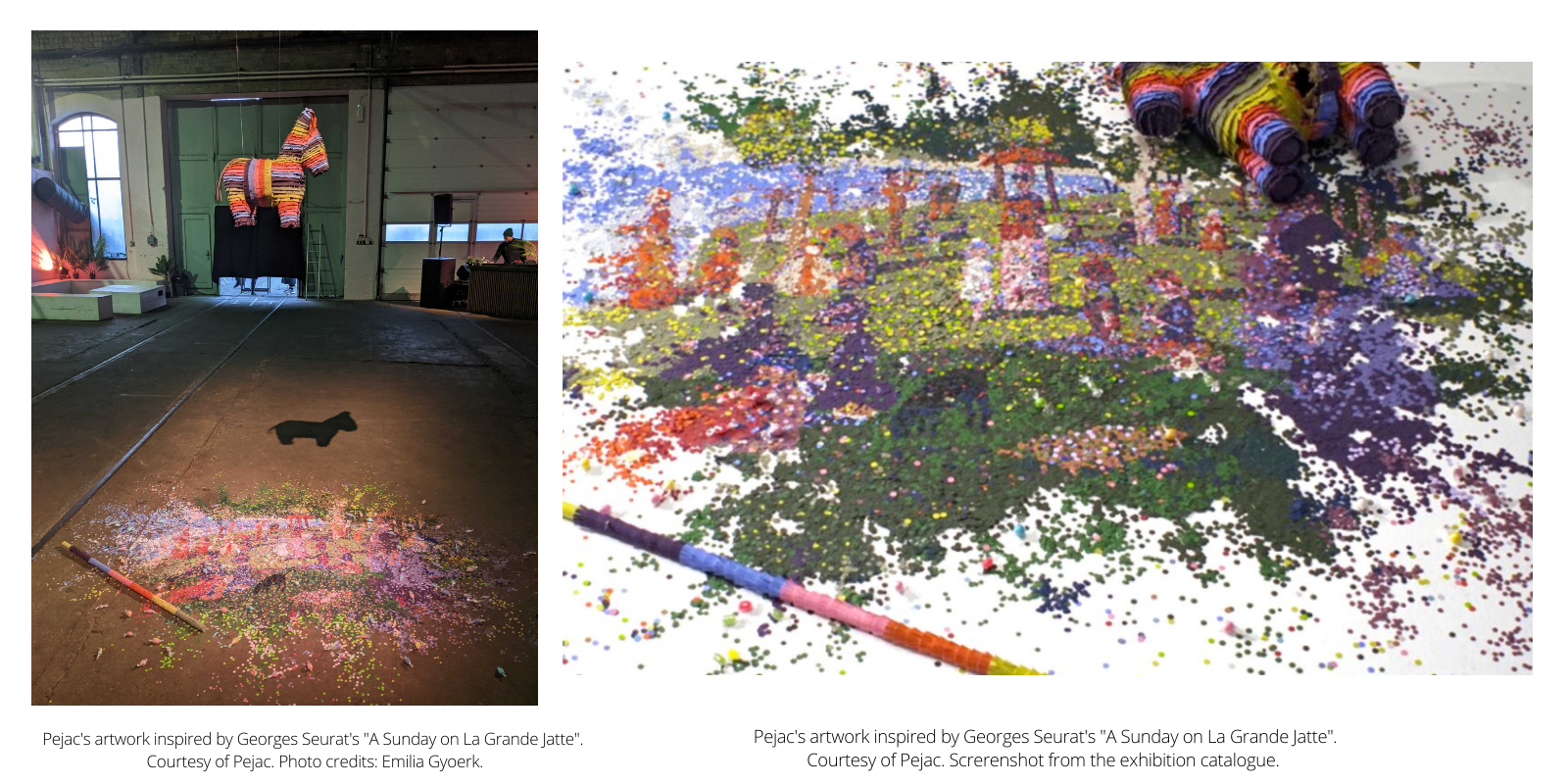 The remaining works have been curated and displayed across two vast atriums. The narrative is explicit and crude, which left me wondering if Pejac is implying that he deems us, as a human race, to be ‘hopeless’ or poignantly ‘hopeful’ with some light at the end of the tunnel that we can find our way back to, if only we make the right choices.

The first central installation in the atrium showed a large paper boat sinking into the floor of concrete, losing its contents along the way, playing on the innocence of childhood memories of making paper boats and planes. Suspended from the ceiling, life-sized paper origami seagulls featured in a way that particularly juxtaposed with the industrial concrete of the room, which left me feeling unsettled. To further add to this feeling, I then caught sight of a couple of these ‘seagulls’ ripping apart the floating boxes revealing their contents: small toys and figurines. 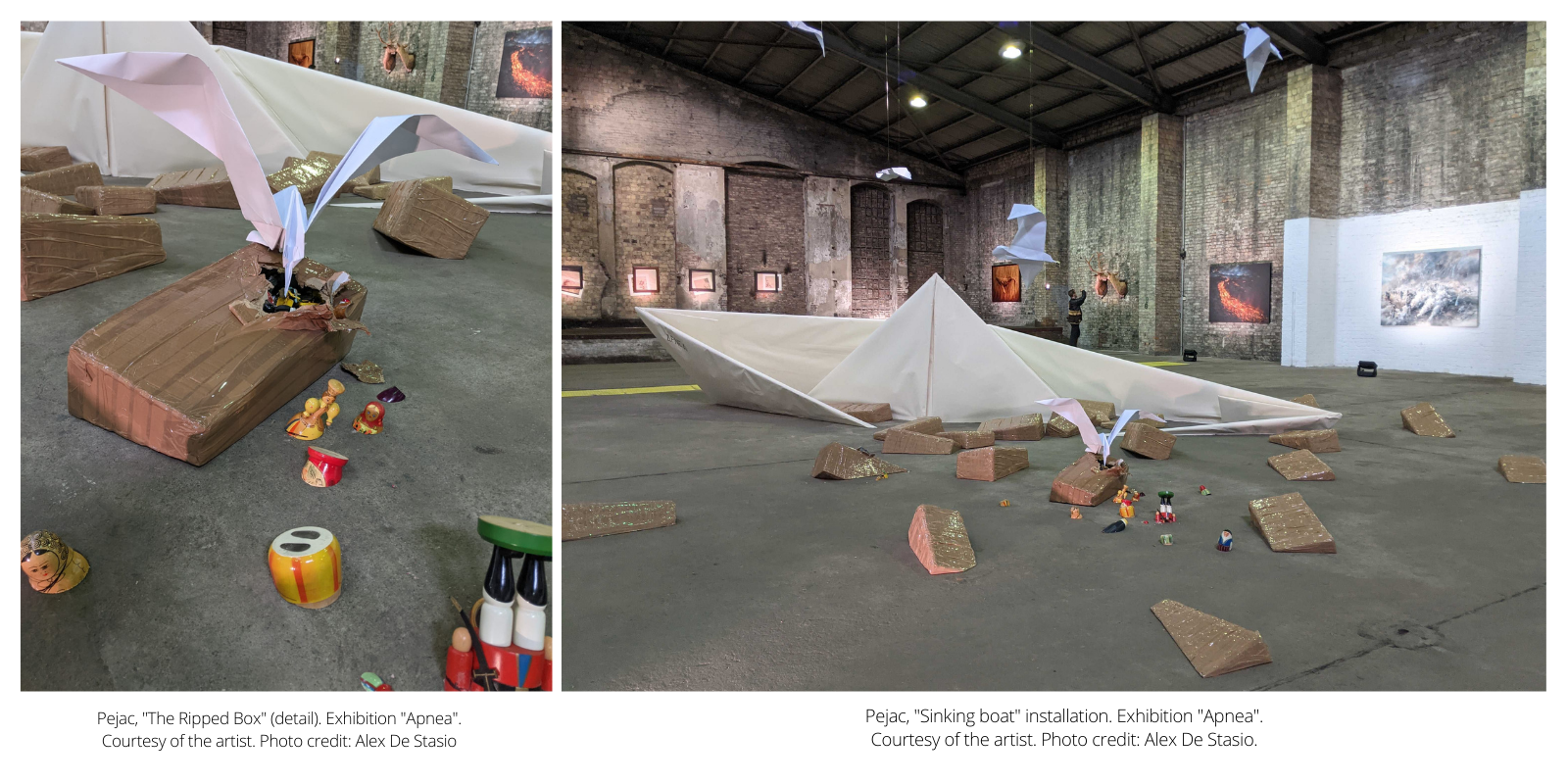 Walking around this site, different thoughts continued to run through my mind around our impact as humans on the environment manifested as discarded and lost toys, and contributing to rising sea levels that were now engulfing even an innocent paper boat, and its contents which seemed to be representative of our children’s futures.

Along the walls of this main atrium began the tour of Pejac's works. A new series of works I hadn't seen before, but which instantly grabbed my attention, were the set entitled Oppressed. Four works on paper, executed in pencil and chalk which present a figure trapped and oppressed by the borders of the frame.

The execution resonated with me through its renaissance and neoclassical art traits, recalling the drama and the posture of some Caravaggio characters; the solidity of the bodies of Canova; and the tones of the Flemish painting school.

The compositions were strong and empathetic, making it almost impossible to not feel the same fatigue and distress that the subject is experiencing. 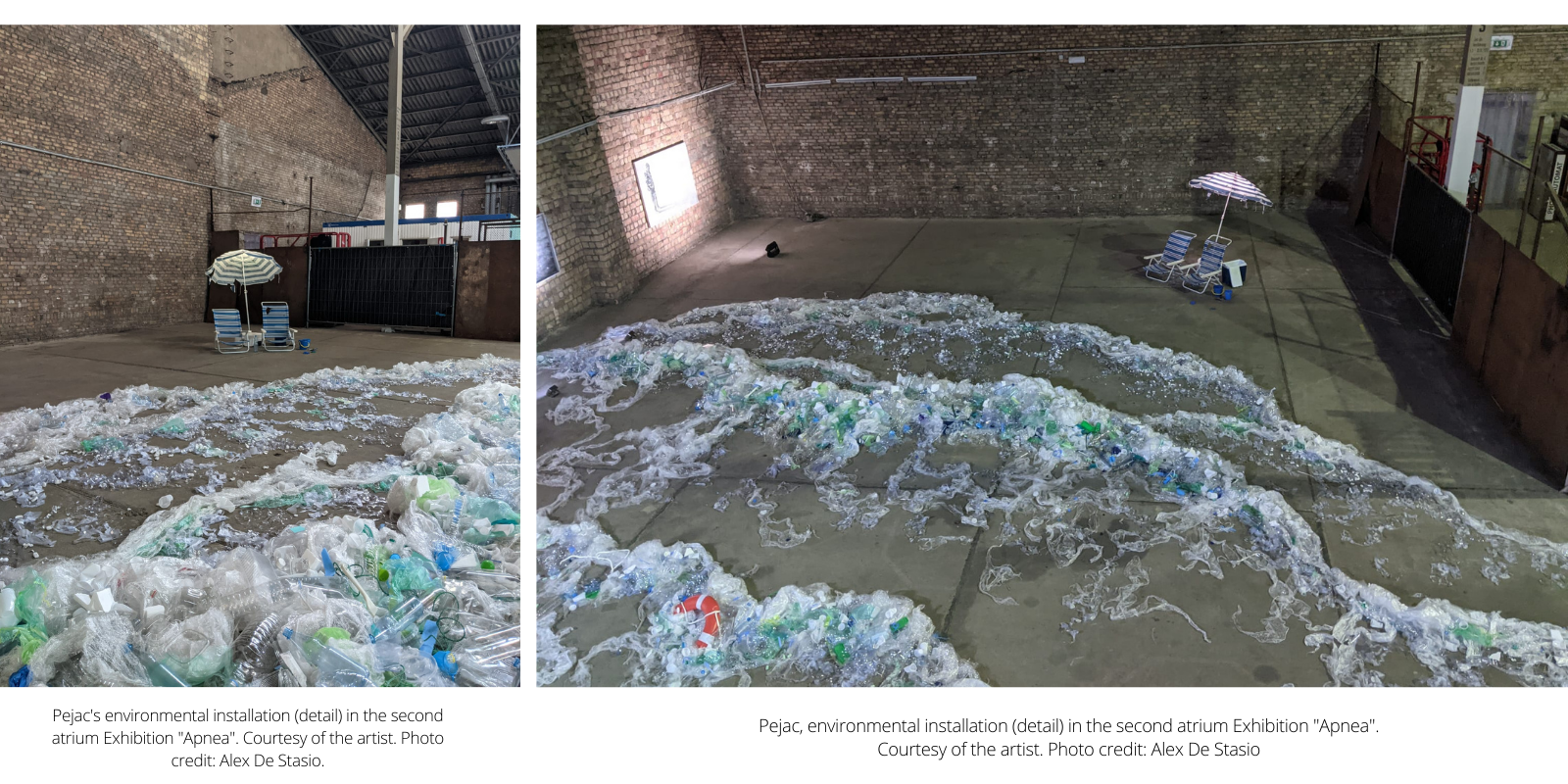 The second atrium was dedicated to the environment. Turning around the corner to enter the open space, you are met with waves upon waves... Of plastic. What at first seems like an idyllic seaside spot, quickly disintegrated into our dystopian reality of pollution. The site is pierced by Pejac's signature lifebuoy floating, which makes me think the artist remains hopeful of a better future floating ahead.

Here we meet some of the classic motifs of Pejac, which in different ways make us reflect on the environment. There is the diptych, Yin and Yang, which brings us to the artist's quintessential narrative: blending the innocence of the subject with the poignant reminder of what lies ahead if climate inaction continues.

Artists’ careers are often characterised by a few pivotal moments where their artistic expression breaks away from the labels and categories that the artist had been associated with until that moment. 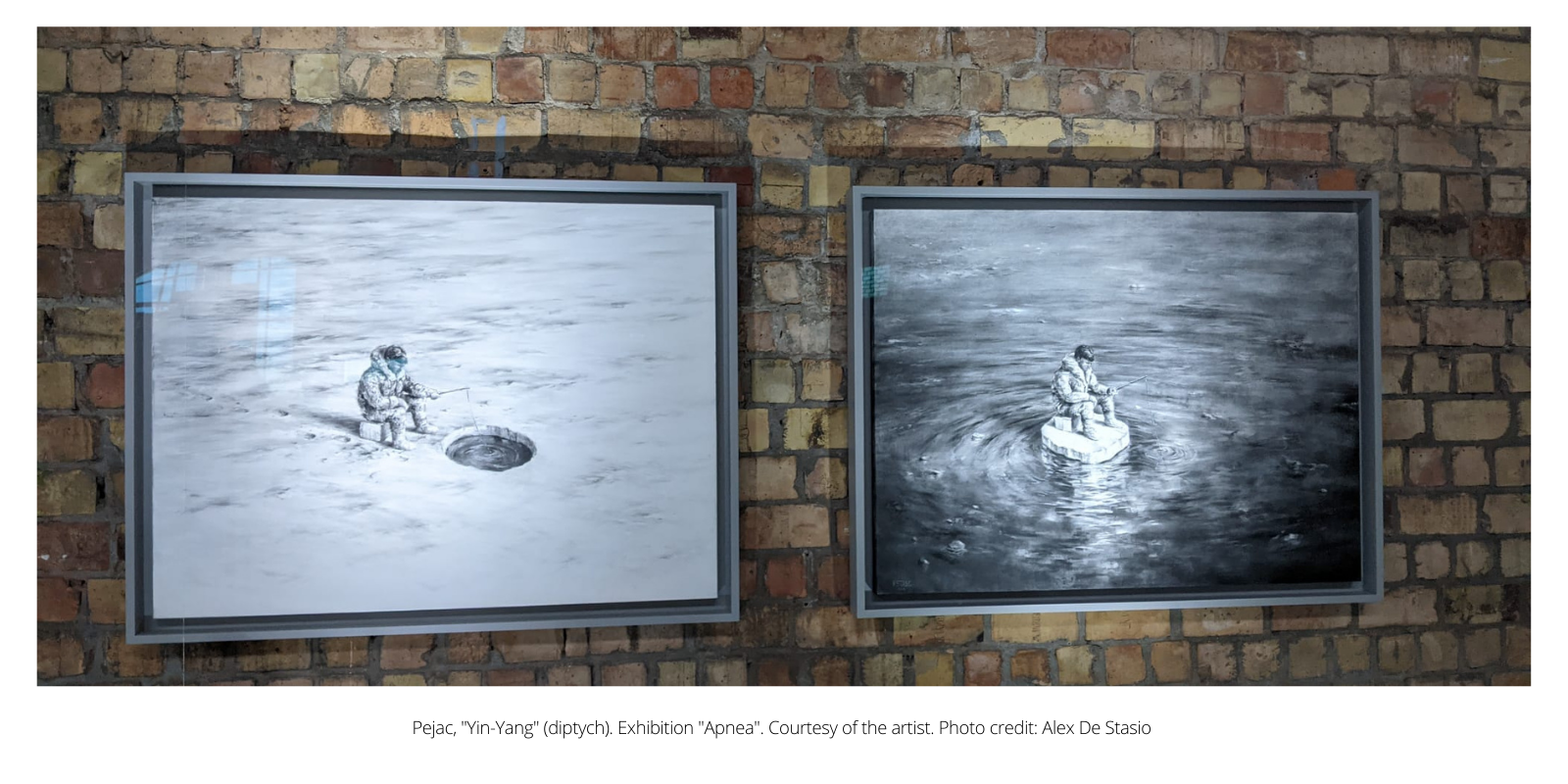 This Pejac exhibition was a clear example of such an expression that now, more than ever, feels definitively categorised - and perhaps in that way unnecessarily restricted - under the label of ‘street art’. Pejac clearly has roots and influences into the street art world, but his work and approach is increasingly drifting to fall more naturally within the approach of a studio artist. As a ‘studio artist’, Pejac explores different techniques that go beyond those typically used by a ‘street artist’, such as painting oil on canvas, bronze sculpture, or even pyrography on wood. The complex motifs and many art historical references in Pejac’s works further seem to point him in the direction of a studio artist, and possibly alluding to a new subdivision of art that becomes “urban conceptual art.” It will certainly be interesting to see where this development takes Pejac and whether this indeed becomes a new artistic movement.

In any case, the richness of this new body of work and the expansion of Pejac’s artistic horizon, makes Pejac one to watch and this show was an impactful experience I won't forget. I look forward to hearing your views on the show.