Welcome to the third article in our series about Pop Art! We hope you have enjoyed them so far. We previously talked about  Pop Art: Before | British vs American and Pop Art: Now | A Global Snapshot: from Hirst to Kusama. Here, we are discussing female pop artists you’ll likely never heard of until now. Before we dive in, let’s briefly recap on the origins of Pop Art when it emerged in the UK and US in the 1950s.

Pop Art is widely regarded as an art movement that sourced inspiration from the everyday; incorporating images from both the ‘popular’ and ‘commercial’ culture of the present day - such as logos, advertising and television. By doing this, it not only provided a social critique on mass-production and consumerism, but it also presented a direct challenge to the traditional ‘Fine Arts’ in terms of both its subject matter and aesthetics. Consequently, the impact Pop Art had, and continues to have on us as a society (and the art world), means it has since become one of the styles most commonly associated with modern art to date. 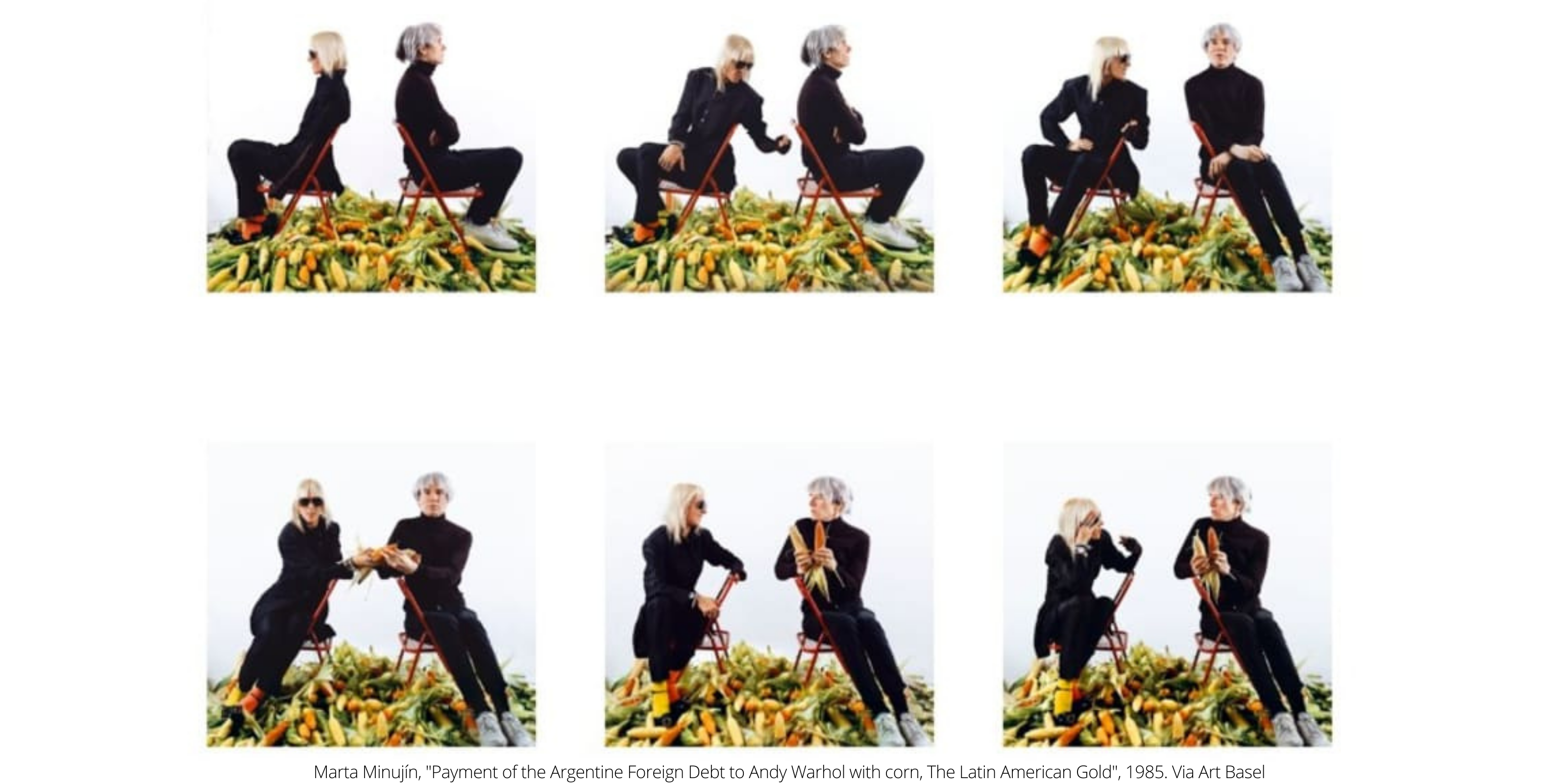 However, there is no denying that this movement has been largely defined by the work of men – Andy Warhol and Roy Lichtenstein have become household names, ingrained into the history books of the period  – whereas the women pop artists of the time have often been overlooked. In fact, an American writer and art critic Lucy Lippard, (1937-), in 1973 even stated that “if the first major Pop artists had been women, the movement might never have gotten out of the kitchen.”

Not long after Pop Art emerged, the Women's Liberation Movement started in the Western world to combat the patriarchy and fight for gender equality. Even though a lot has been achieved since then, it still feels like the playing field is far from level, especially for female pop artists. So, to help even the scores, we’ve compiled a list of some of the key women pop artists who made significant contributions to the movement, despite not achieving widespread fame and recognition… we hope you’ll enjoy it! 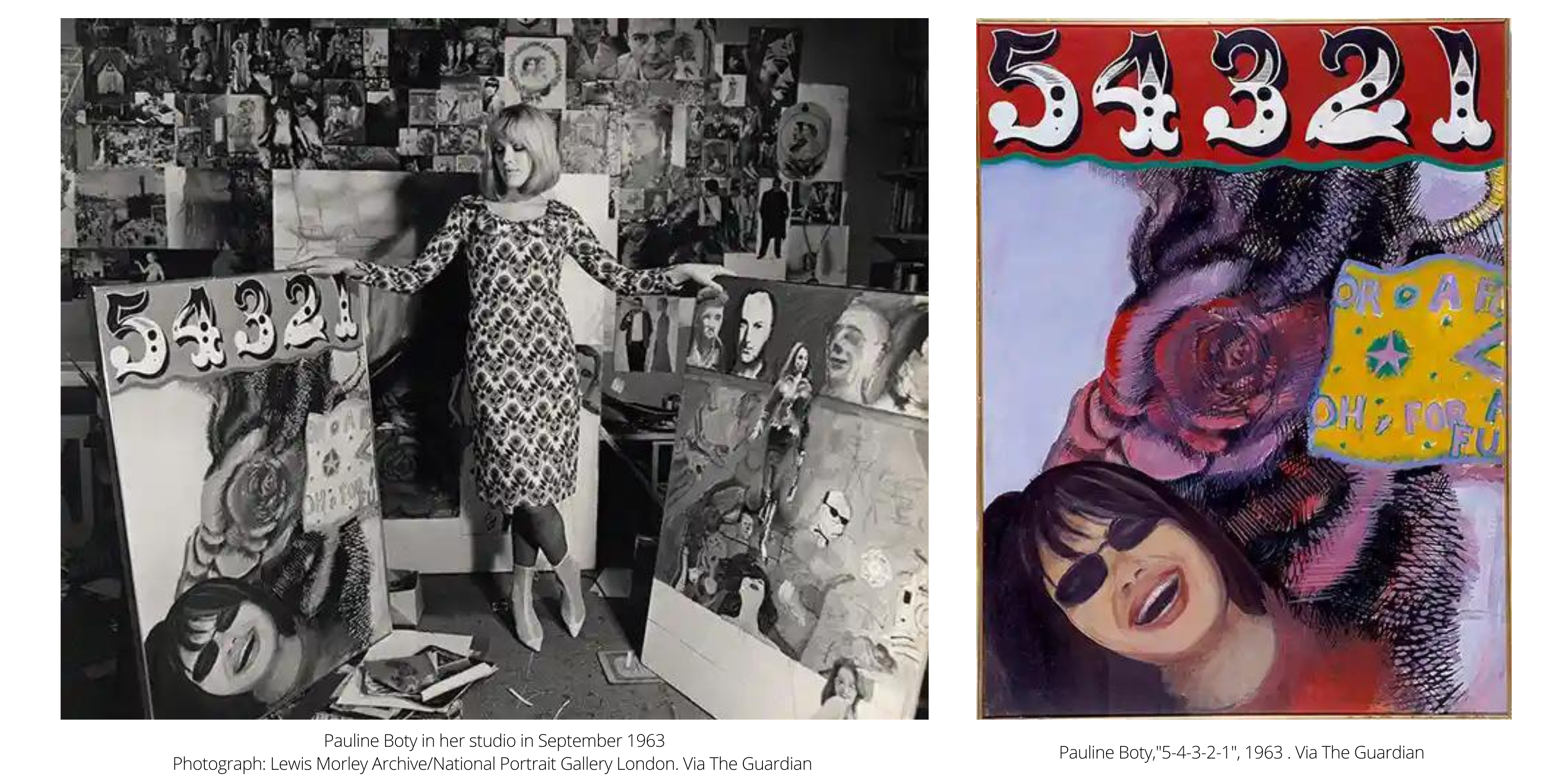 British artist Pauline Boty (1938–1966) was a founder of the British Pop Art Movement and the only female painter in the pop artists group in Britain at the time. Highlighting the experiences and desires of women, her work is imbued with femininity, creating an interesting counterpoint to the work of her contemporaries. Often exploring themes such as sexuality, her paintings and collages bear a rebellious streak, criticising the male-dominated world in which she lived. 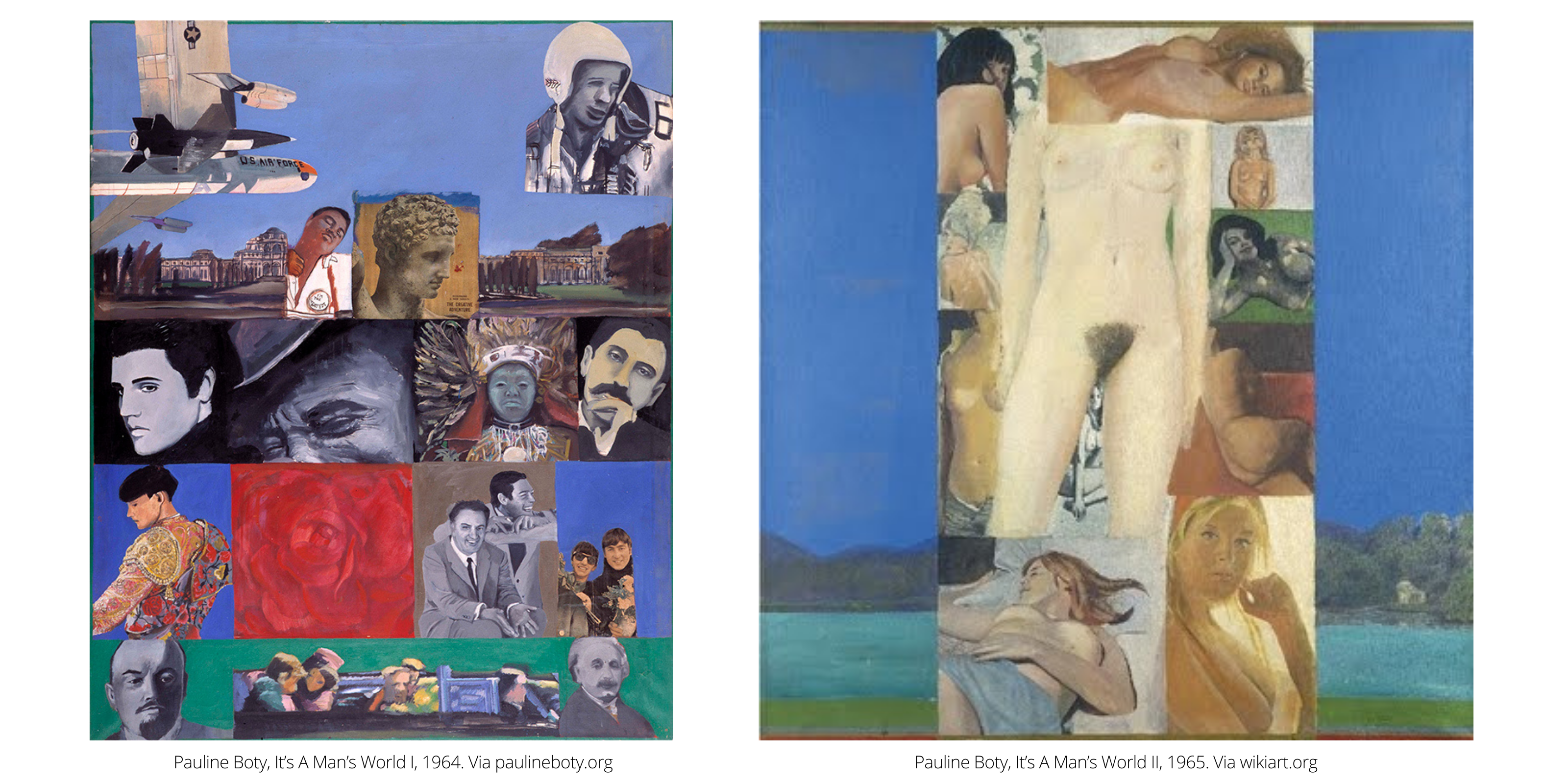 Both her works, It’s A Man’s World I (1964) and II (1965) showcase how controversial she must have appeared amongst her male peers. The first painting portrays men (you can spot former US president John F. Kennedy and American singer Elvis Presley), war and glamour. The second artwork shows naked female bodies taken from pornographic strips in an English countryside background; it is already a shocking painting, but what was probably more shocking at the time was that a woman produced it. Unfortunately, Boty’s work was frequently dismissed by art critics and, as a young woman often defined by her good looks, she wasn’t taken seriously as an artist. It is only in recent decades, (long after her death), that Boty’s important contribution to British art has received recognition by the art critics and public. 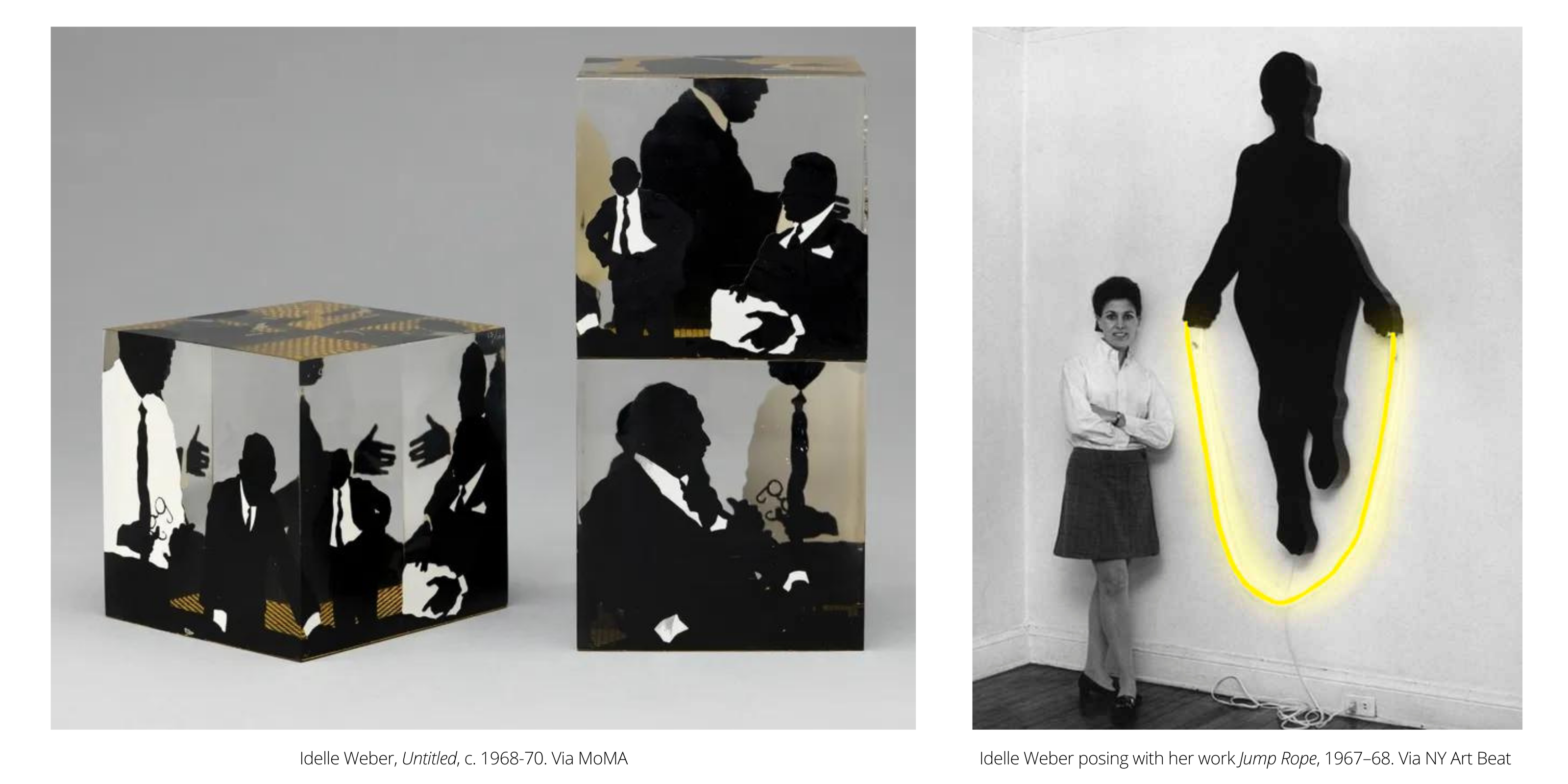 Known for her striking silhouette paintings that looked like visual advertisements, Idelle Weber (1932–2020) was an American artist whose work was also closely aligned with the Pop Art movement. Although she experienced some early success (in 1957 her charcoal drawing Observation of Sound (1955) was showcased in MoMA, New York), she later faced difficulties that centered around the fact she was a woman; her plans to marry and have children meant that she was formally denied entry to a class taught by Robert Motherwell (who was, and still is, regarded one of the most articulate painters in Abstract Expressionism). When she questioned his refusal, he replied “What's the point? Married women with children do not continue to paint”.

However, despite these setbacks, she still managed to successfully develop her iconic style. Her work often reflected the financial and social changes in American society and addressed themes such as consumerism, advertising and the rise of the corporate world in America. For example, the faceless figures in her silhouette works underline the anonymity of corporate life and capitalism. Later in her career, Weber experimented with Photorealism, examining the landscape and environment associated with urban life. 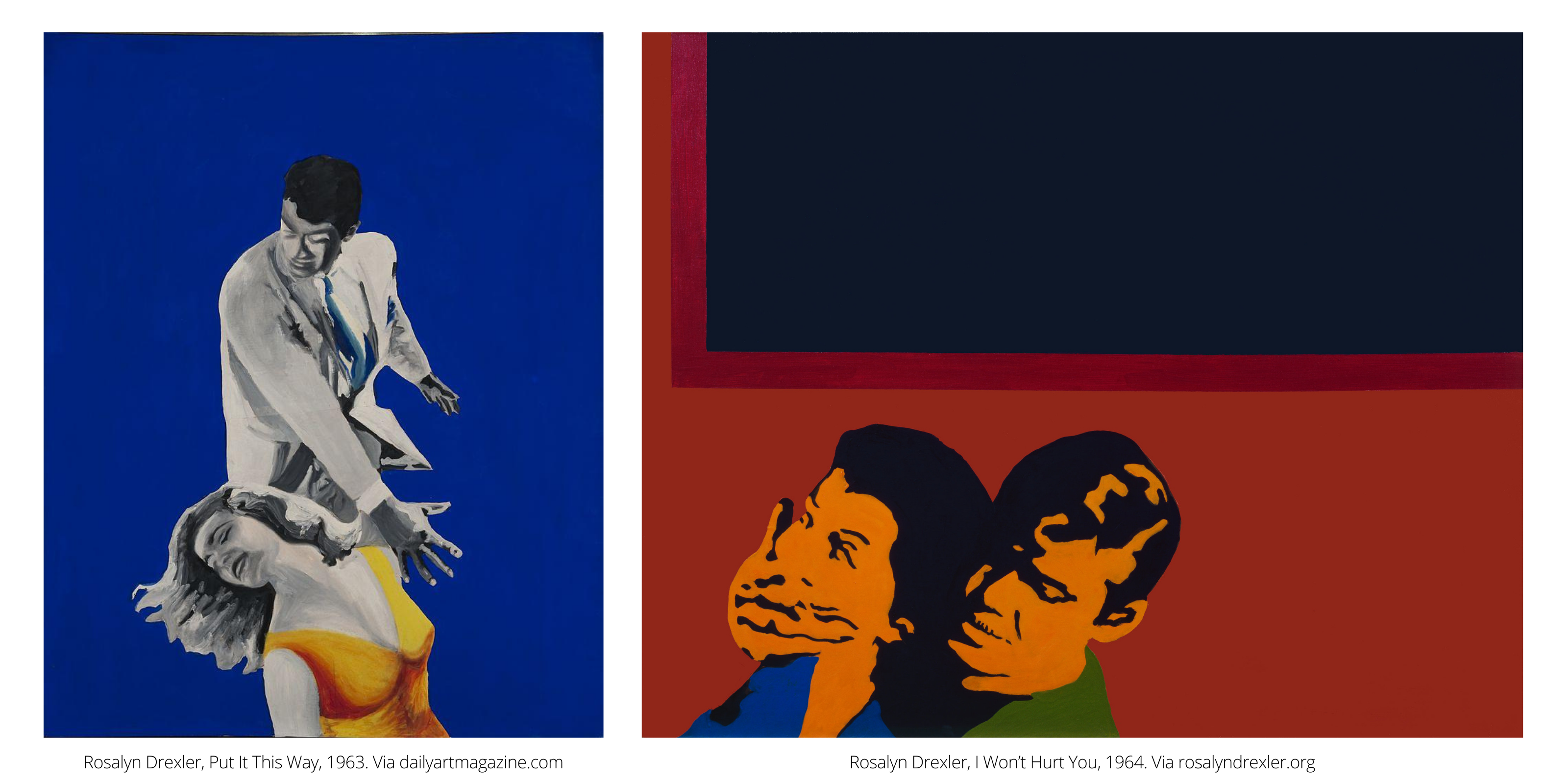 Rosalyn Drexler (1926–) is an American playwright, novelist and artist who was involved in the Pop Art movement in the 1960s. As an ex-professional wrestler, Drexler was influenced by the objectification and sexism she experienced and witnessed, and her work explores these themes. Like other pop artists, Drexler incorporates mass media images in her work, taking images from film stills, such as King Kong in her work The Dream (1963),  and magazines and repurposing them to underline social issues, including violence, alienation and representation of women. These gender issues can be seen in her paintings Put it This Way (1963) and I Won’t Hurt You (1964). By repurposing such images, her work goes hand in hand with the Women’s Liberation Movement at the time and criticises the restrictive and problematic narratives of women that are often conveyed by popular culture.

“Women were not bankable at that time. Every other male artist…other galleries came along. I received no offers. In my naivete I thought it was because I was not a painter so I must make paintings.” 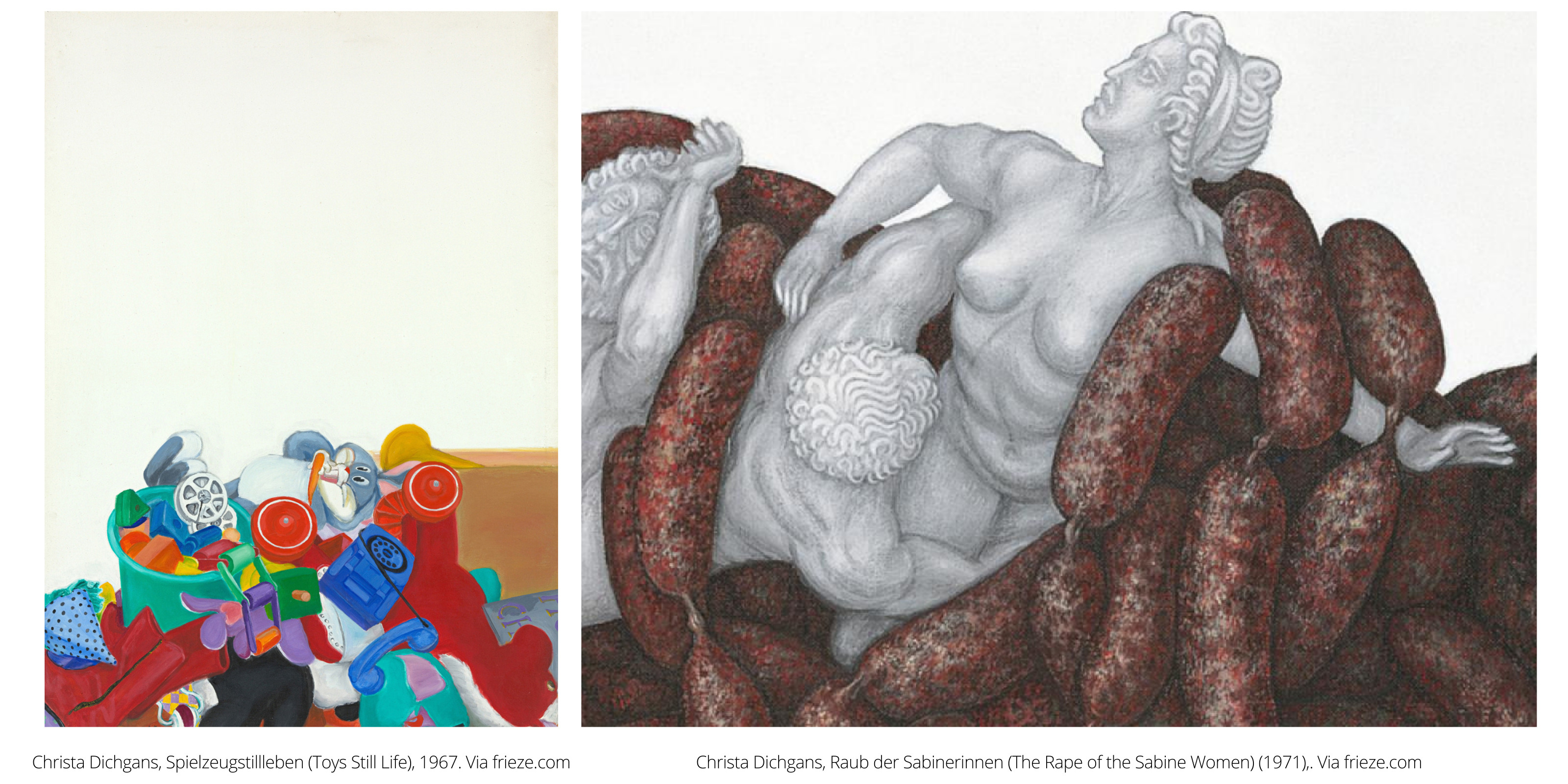 Concerned with everyday consumerist life, German artist Christa Dichgans (1940–2018) was another important contributor to the Pop Art movement. Her work often reflected shifts and themes in her personal life. For instance, after the birth of her son in 1963, Dichigans began to create still life paintings of toys as seen in Spielzeugstillleben (Toys Still Life) (1967). Dichgans developed these, experimenting with the composition of these works and repeating key motifs, leading to colourful, playful works which showed an affinity with Pop Art. A later stay in the 1970s at a Florentine villa in Italy also inspired her work, for example, Raub der Sabinerinnen (The Rape of the Sabine Women) (1971), as she incorporated local influences such as Italian sausages and classical sculptures. 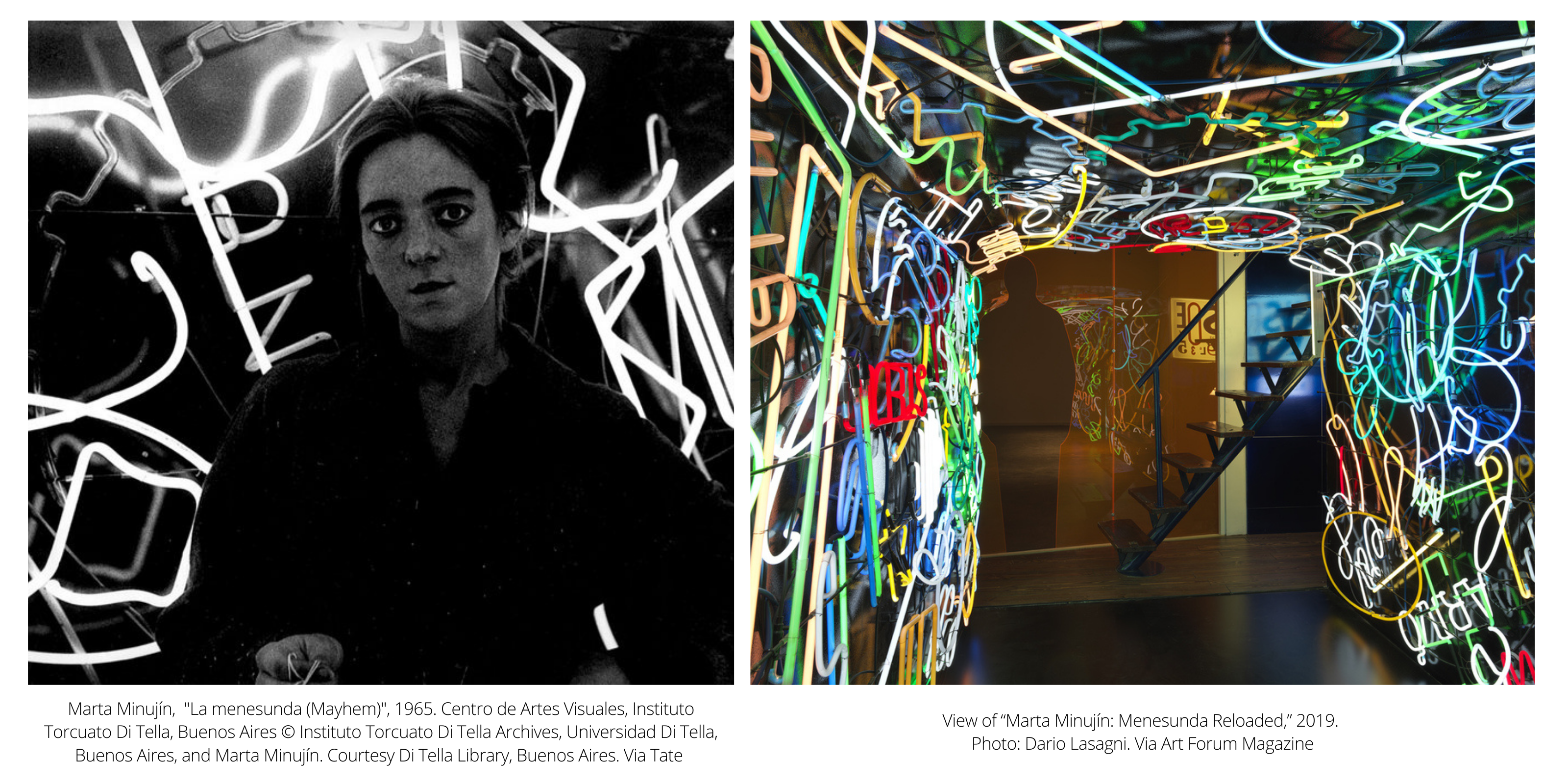 Marta Minujín (1943–) is an Argentine conceptual artist who, like other pop artists, was influenced by popular and commercial culture. When she moved to New York, Minujín became friends with Andy Warhol, and her work addressed similar themes yet in a more interactive way as her work was connected to active participation rather than passive observation. In the early 1960s, she started incorporating non-traditional materials into her art, such as sections of cardboard coated in industrial paint, manipulating them and creating architectural constructions, called Cajas (Boxes). Even though they were not as sleek as Warhol’s Brillo Boxes (1964), Minujín’s Cajas portrayed the artist’s fascination with the “degradation of urban street life”. 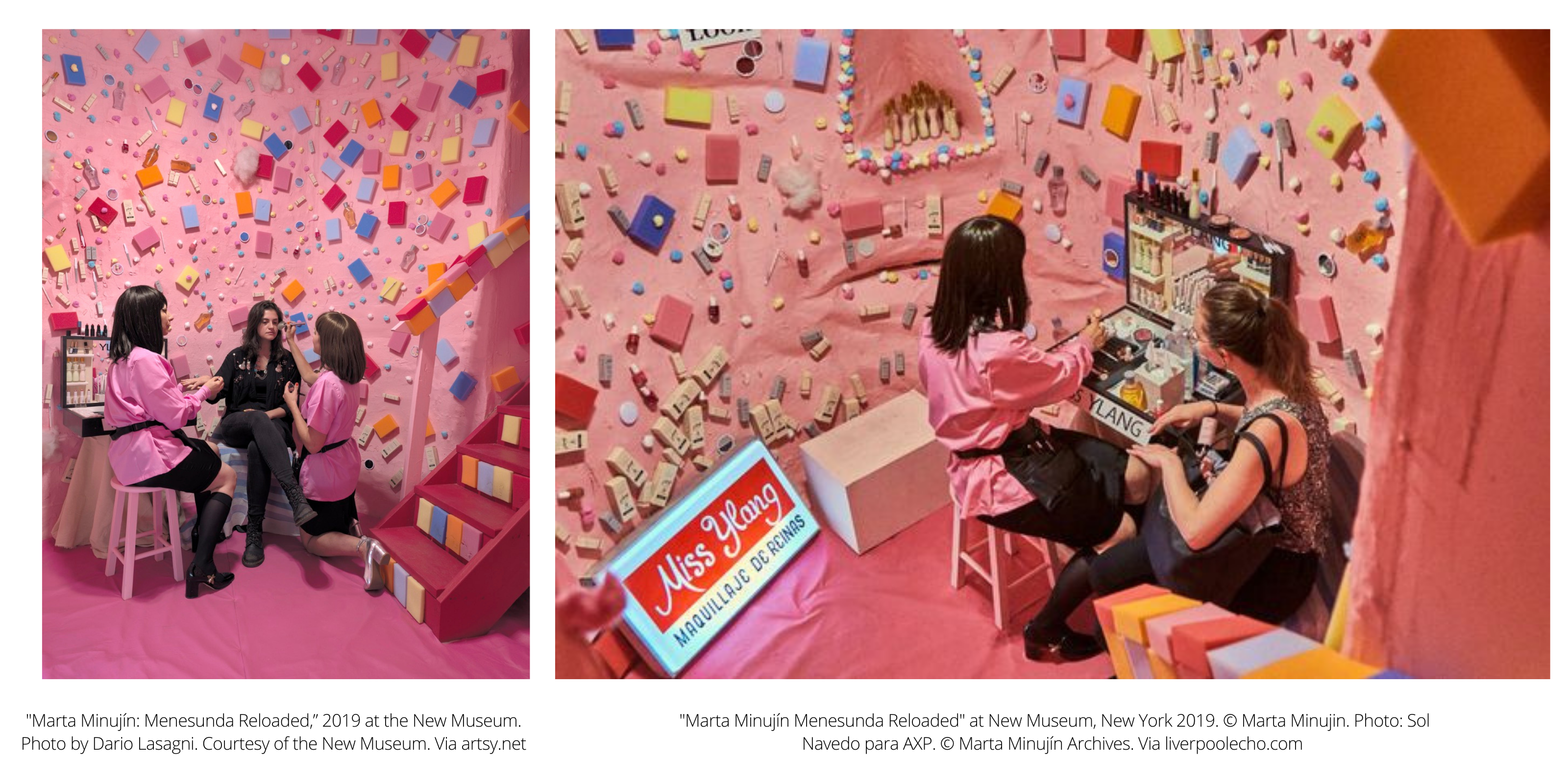 Participation was an integral aspect of her work as she used these boxes and other found objects to create 3D assemblages and structures with which viewers could directly interact. For example, her 1965 work La Menesunda (Mayhem), displayed at the Torcuato di Tella Institute in Buenos Aires, included 16 different environments that viewers could enter. These environments (beauty salon, walk-in freezer, a room with a couple in a bed) were placed in a structure shaped like a woman’s head. Through these participatory works, Minujín wanted to evoke a reaction from viewers, eliciting surprise, shock and curiosity. In 2015, Minujín recreated the immersive experience in Buenos Aires and later, in 2019, presented a second reconstruction La Menesunda Reloaded in New York. Tate Liverpool was set to open the third recreation at the end of 2020 but due to the pandemic, the exhibition has been postponed. Don’t miss out on the chance to see this amazing artist when new dates are announced!

Although the Pop Art movement has been dominated by men, it's clear to see that women pop artists also made essential contributions to it. Indeed, their work was often not only concerned with consumerist culture but also the problematic representation of women in popular culture, distinguishing their work from that of their male contemporaries.

We think it’s about time that women pop artists receive the recognition they deserve... So let’s keep the conversation going! Which of these artists is your favourite and why?

This article has had contributions from the writer Rachel McHale.