The highly-anticipated launch of Artscapy’s Marketplace marks the latest exciting development on our platform dedicated to fine art collecting.  In celebration of the launch, we are accompanied by our latest Artscapy Ambassador, Saskia Jiggens, who is an art historian, writer and presenter based in London. Without further ado, here are her top tips of works available for sale under £2,500.

The Artscapy Marketplace aims to democratise the acquisition process and dismantle the barriers to entry facing young collectors.  Compared to the traditional gallery model, Artscapy can offer a more affordable route to purchase art and particularly suits those who are beginning their collecting journey or buying art on a budget.

From Surrealism to sculpture, take a look at my favourite pieces for less than £2,500 currently available to purchase through Artscapy’s Marketplace: 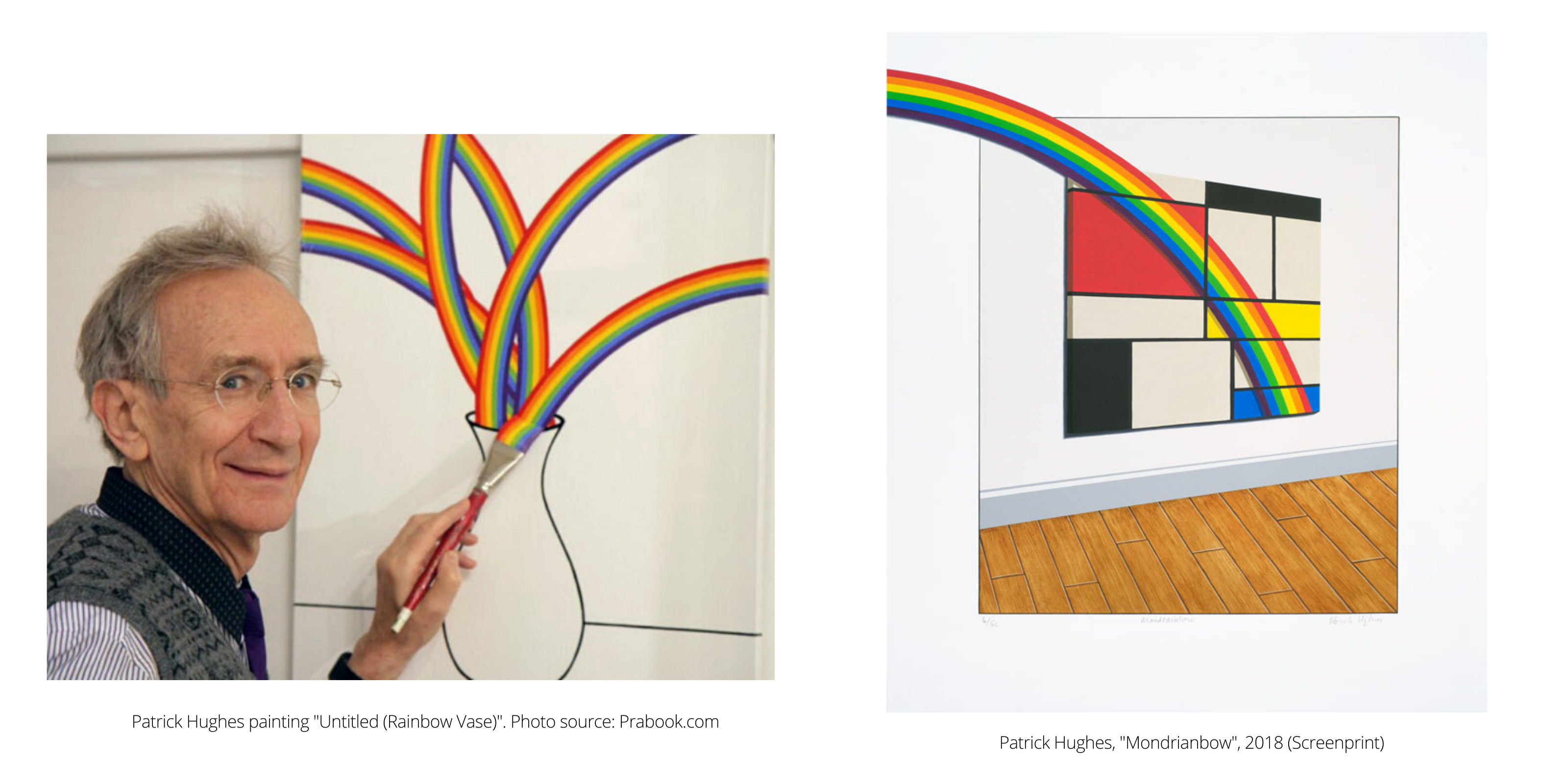 Structured geometry meets whimsical Surrealism in this piece by British artist Patrick Hughes (b. 1939).  Featuring a faux Piet Mondrian work at its centre and composed within a fabricated interior setting, Hughes constructs a playful fantasy world.  Mondrian’s ideals are thwarted by Hughes’ placement of a magnificent, multicoloured rainbow across the scene and the portmanteau of the title (Mondrian + rainbow) reinforces the amalgamation of these two entities.  As a linear purist, Mondrian’s characteristic use of vertical and horizontal lines, restricted handling of primary colours and framing within a two-dimensional space, are overpowered by the arched rainbow and trompe l’œil optical illusion created by the three-dimensional positioning of his work on the wall.  Symbolising equality, promise and most recently the NHS fight against Covid-19, rainbows provide an unlimited array of meanings.  Rebelling against Mondrian’s artistic constraints, this piece is a liberating tribute to hope, the future and new beginnings. 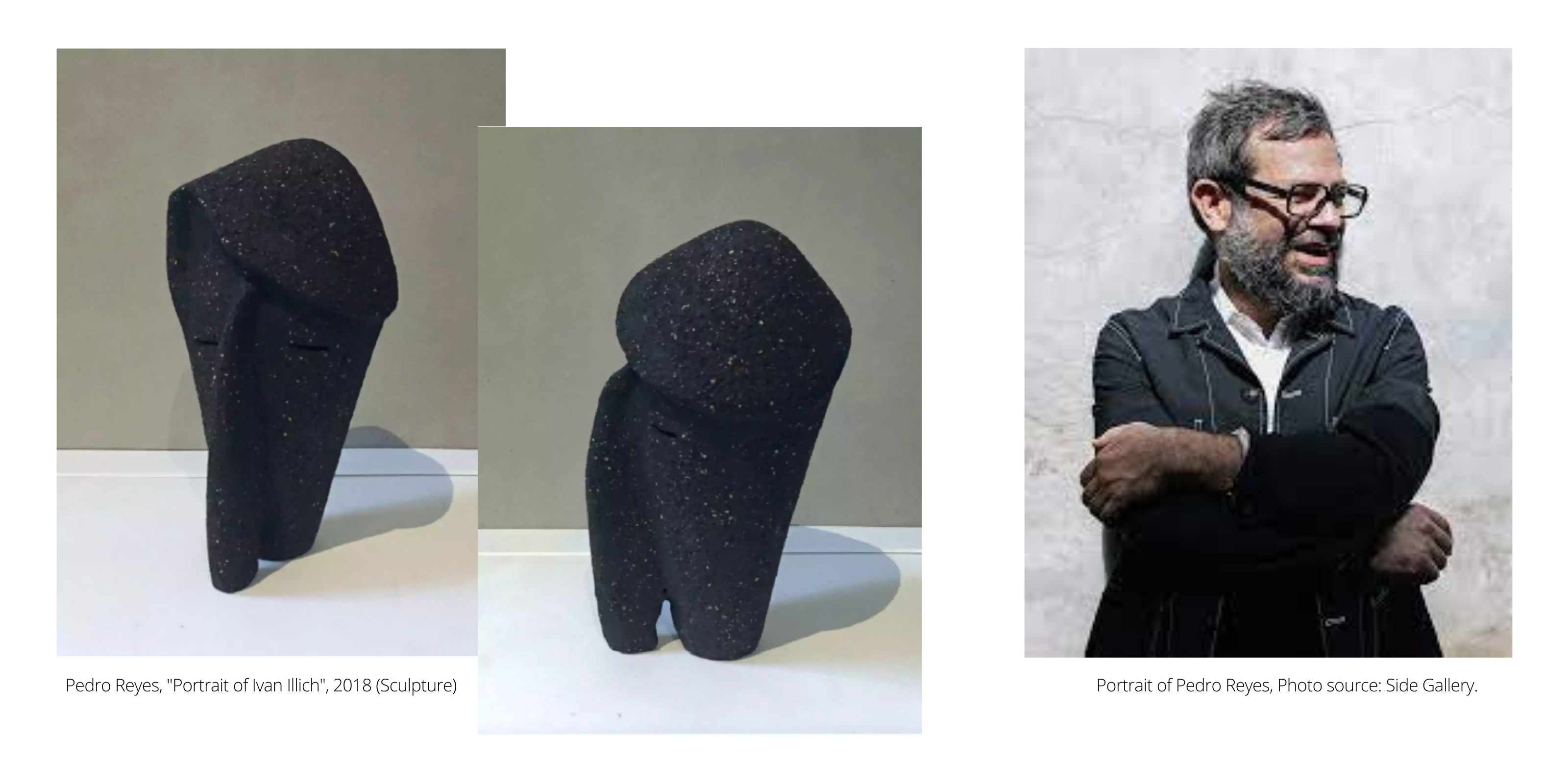 Mexican artist Pedro Reyes (b. 1972) is at the forefront of sociopolitical art, questioning authority and challenging establishment figures.  This terracotta work is a sculptural portrait of Austrian philosopher and social critic, Ivan Illich (1926 – 2002).  A Roman Catholic priest, Illich was a disruptive character who chastised modern society’s narrow-minded approach to education.  Having argued against the systemic oppression of schools and the misapprehensions surrounding the benefits of many modern technologies, Illich is liberated in this abstract rendering by Reyes, using traditional firing methods.  Reminiscent of work by Henry Moore, Illich’s features are exaggerated, then reduced to their essential forms.  It is a caricature inspired by an admiration of Illich’s anti-elite polemic.  Reyes’ depiction of Illich is a radical totem, memorialising this revolutionary thinker.

Canadian artist John Monteith’s (b. 1973) interest in urbanism reverberates through the fragmented forms in this artwork.  The visual architecture of this composition allows the forms to oscillate between overtness and covertness, with language being teased behind impervious silhouettes.  Words appear shattered, yet their materiality is substantial.  Monochrome shapes against lexical colours add gradations of depth, giving the work an illusory quality.  The title references an unusual phrase; a misquote of the Benjamin Franklin quip, “And as in the dark all Cats are grey”, from a 1745 letter.  For contemporary audiences, the proverb’s accepted meaning relates to the irrelevance of appearances in the dark, due to a lack of visual clarity.  Likewise, in this work, it is difficult to discern every element clearly and obscuration is eclipsed by the individual components’ collective aesthetic.  This is a cleverly-configured piece that epitomises the intrigue embedded in Monteith’s analytical artistry.