Buying art as an investment can diversify your portfolio and reduce overall risk to your capital.  Interest in art as a collectible asset has proven particularly popular within the contemporary art market, which is fast-becoming a melting pot of innovative talent and cutting-edge creativity.

As collectors choose to take advantage of digital trading platforms, Artscapy’s Marketplace is setting out to provide a transparent community, through which collectors can connect with sellers and fellow art patrons.

Read on to view my contemporary art highlights per medium, currently available to purchase in the Artscapy Marketplace: 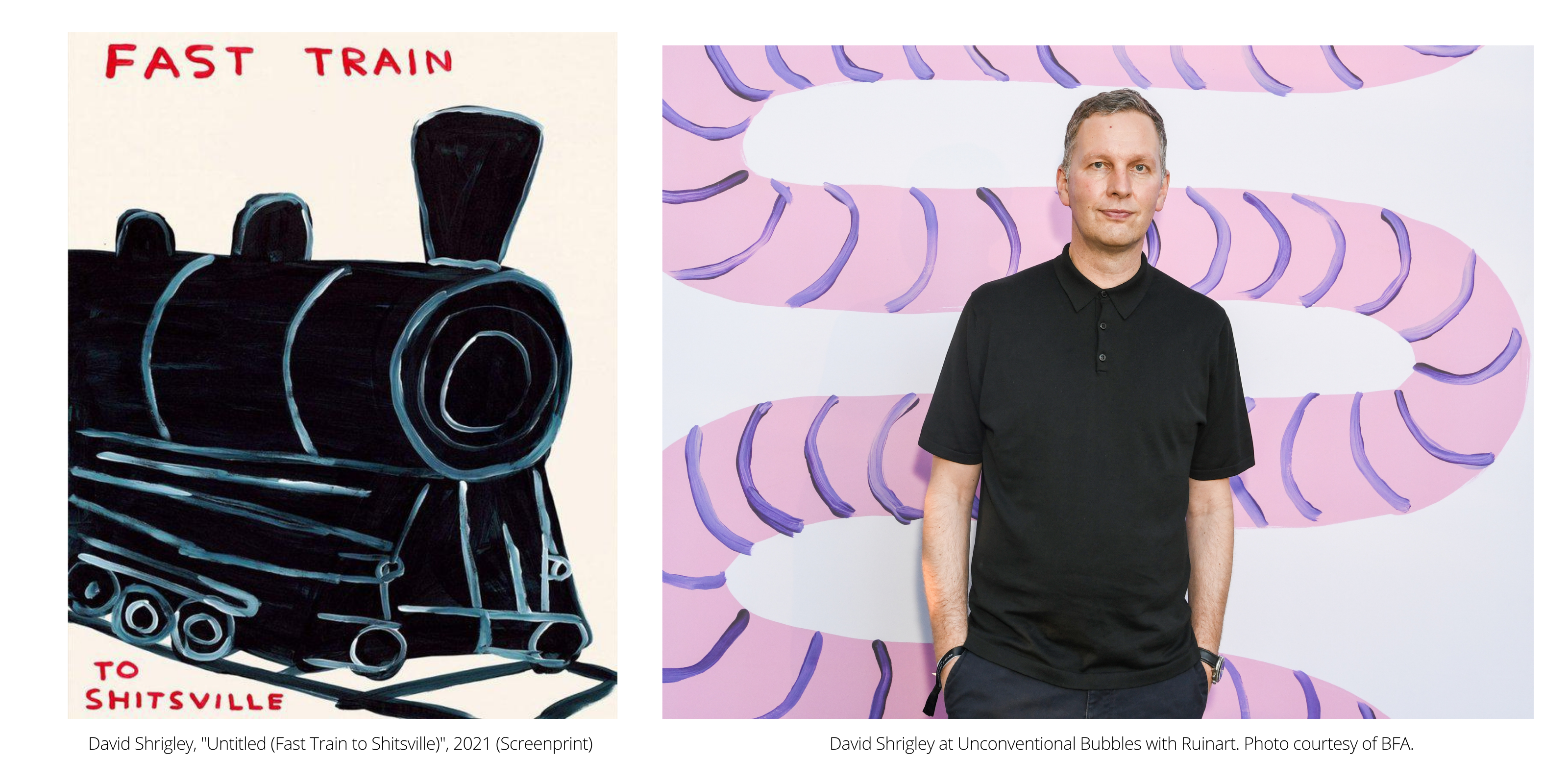 British artist David Shrigley (b. 1968) is renowned for his deadpan humour and this piece embodies the tongue-in-cheek content of his work.  The childlike naivety of his illustrations is juxtaposed with adult aphorisms, often drawing on contemporary issues and everyday annoyances.  In this piece, Shrigley mockingly references both the inefficiencies of public transport (“Fast Train”), as well as present-day sentiments regarding world affairs and politics (“Shitsville”).  It is also undoubtedly a nod to The Monkees’ 1966 song ‘Last Train to Clarksville’, which subtly protests against the Vietnam War in its final line.  With dry wit, Shrigley transforms shared experiences into something comical, thereby neutralising some of the frustrations and irritations.  Bringing some much-needed levity, this entertaining work will retain its relevancy for years to come. 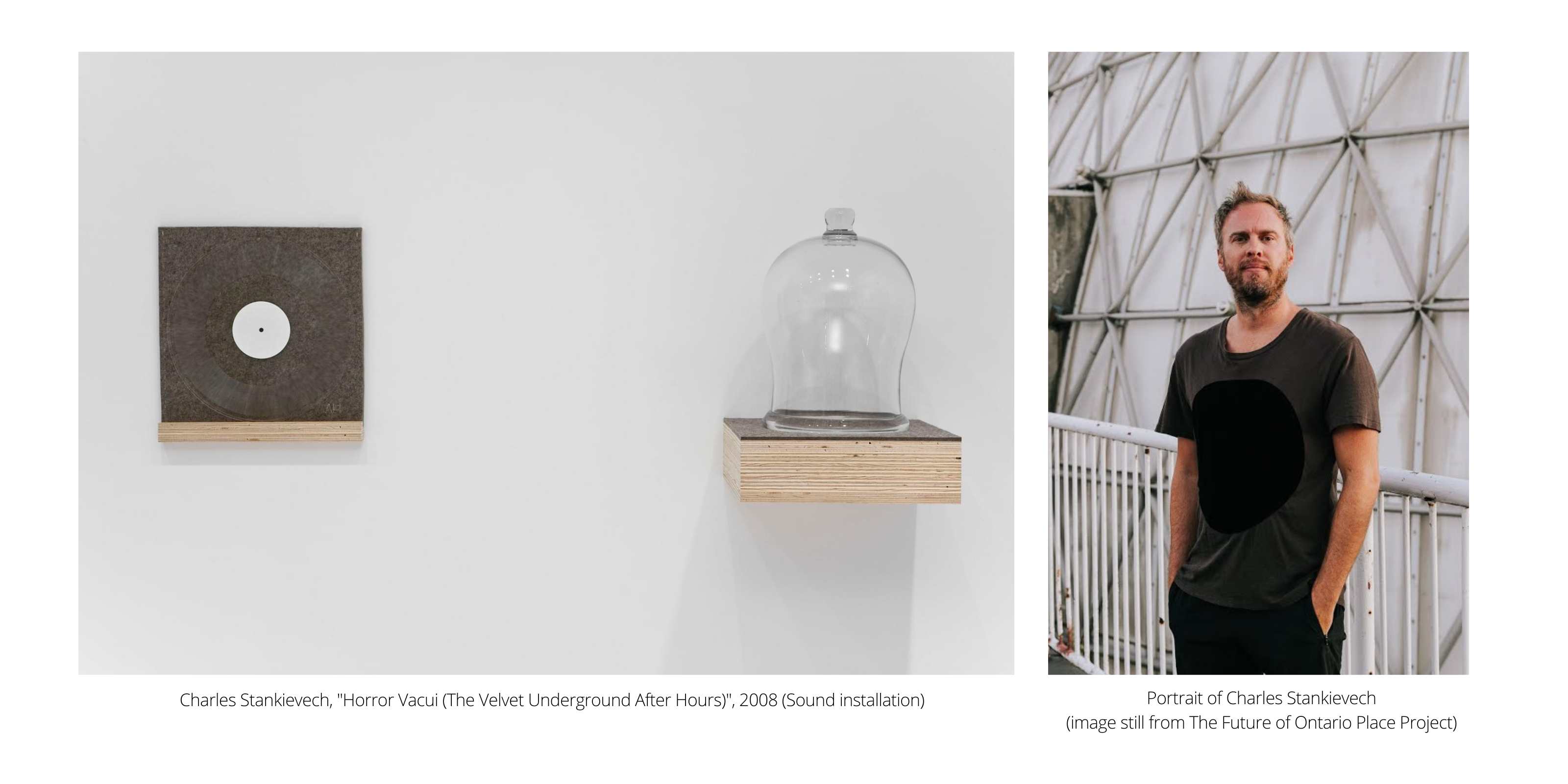 Semi-metaphysical in its employment of ‘the void’, this unusual work by Canadian artist Charles Stankievech (b. 1978) will pique the interest of any inquisitive melomaniac.  This installation is one of a series of experiments using American composer Alvin Lucier’s (1931 - 2021) reiterative recording technique.  In this example, Stankievech took ‘After Hours’ by The Velvet Underground and focused on the physical properties of the sound by repeatedly playing the song inside a glass bell jar until the audio converted into a resonant harmonic.  Moe Tucker’s innocent vocals transmutate into an eerie siren call, imprisoned inside the glass dome.  The track’s lyrical impetus is loneliness, as Tucker sings about self-enforced containment, whilst longing to emancipate herself from her solitary circumstances.  The emptiness of the vacuum bell jar acts as a mechanism for this poignant micro-soundscape.  All the apparatus used to create this installation is provided: the vintage laboratory vacuum glass bell jar, embroidered felt dust jacket and an unique 12” clear vinyl record of the modified track.  This is a brilliant interrogation of the plangency of spaces and the materiality of sound. 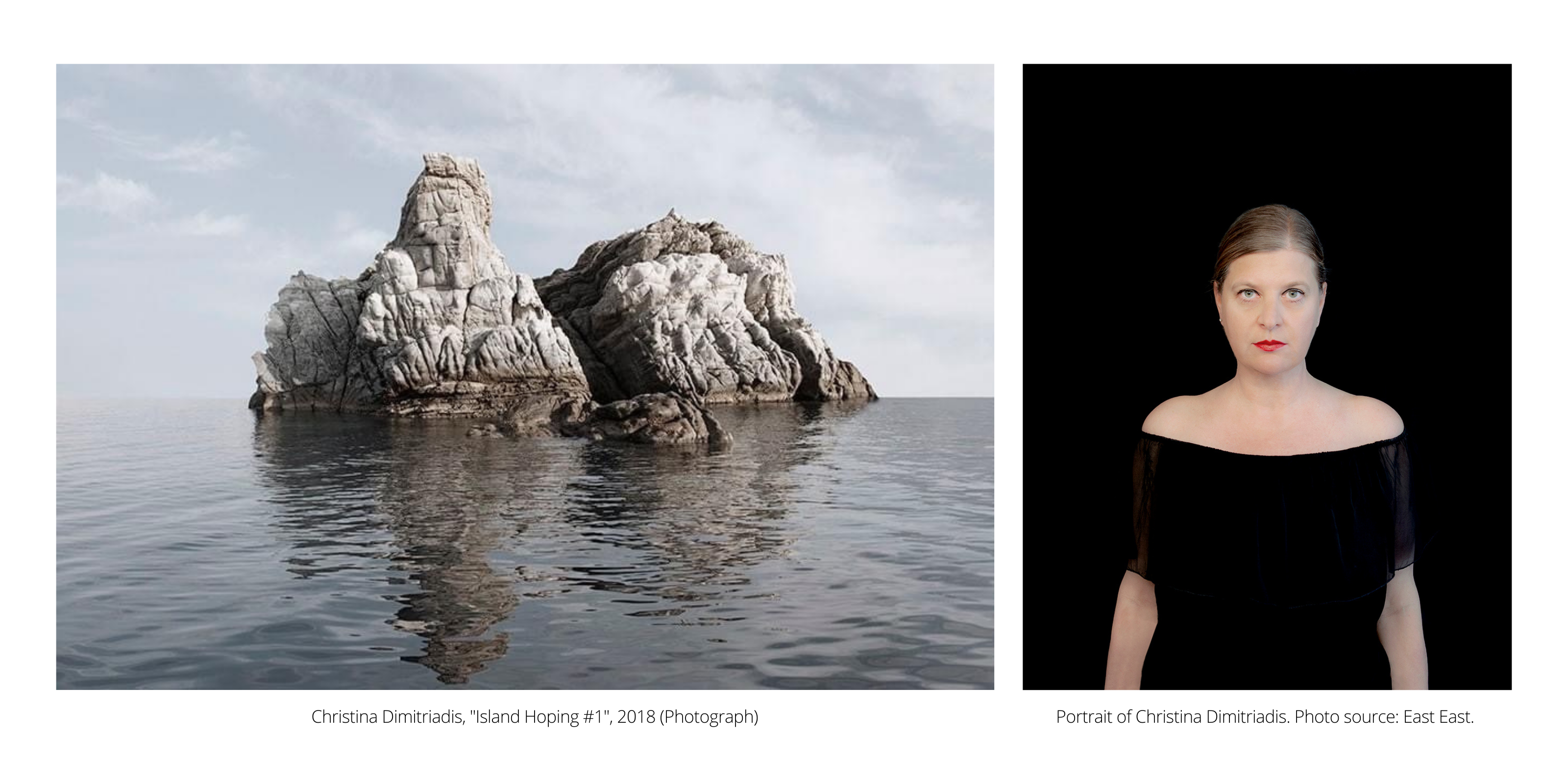 Greek artist Christina Dimitriadis (b. 1967) captures the allure of nature in this photograph of an Aegean island.  She mythologises the Mediterranean, transforming the scenery into something bewitching and mystical.  It is a location overflowing with anticipation, yet the barren, craggy landscape lends the scene an inhospitable atmosphere.  Behind this work is a story of migration.  The Dimitriadis family originated from the island of Helgoland in the North Sea and this image is part of a series of photographs tracing the movement of people and the infrastructure of civilisations.  Despite the perceived desolation of this Greek island, the wordplay within the title (‘Hoping’ instead of ‘Hopping’) implies positivity and a belief in aspiration.  Dimitriadis’ piece is a pertinent articulation of journeying and human displacement. 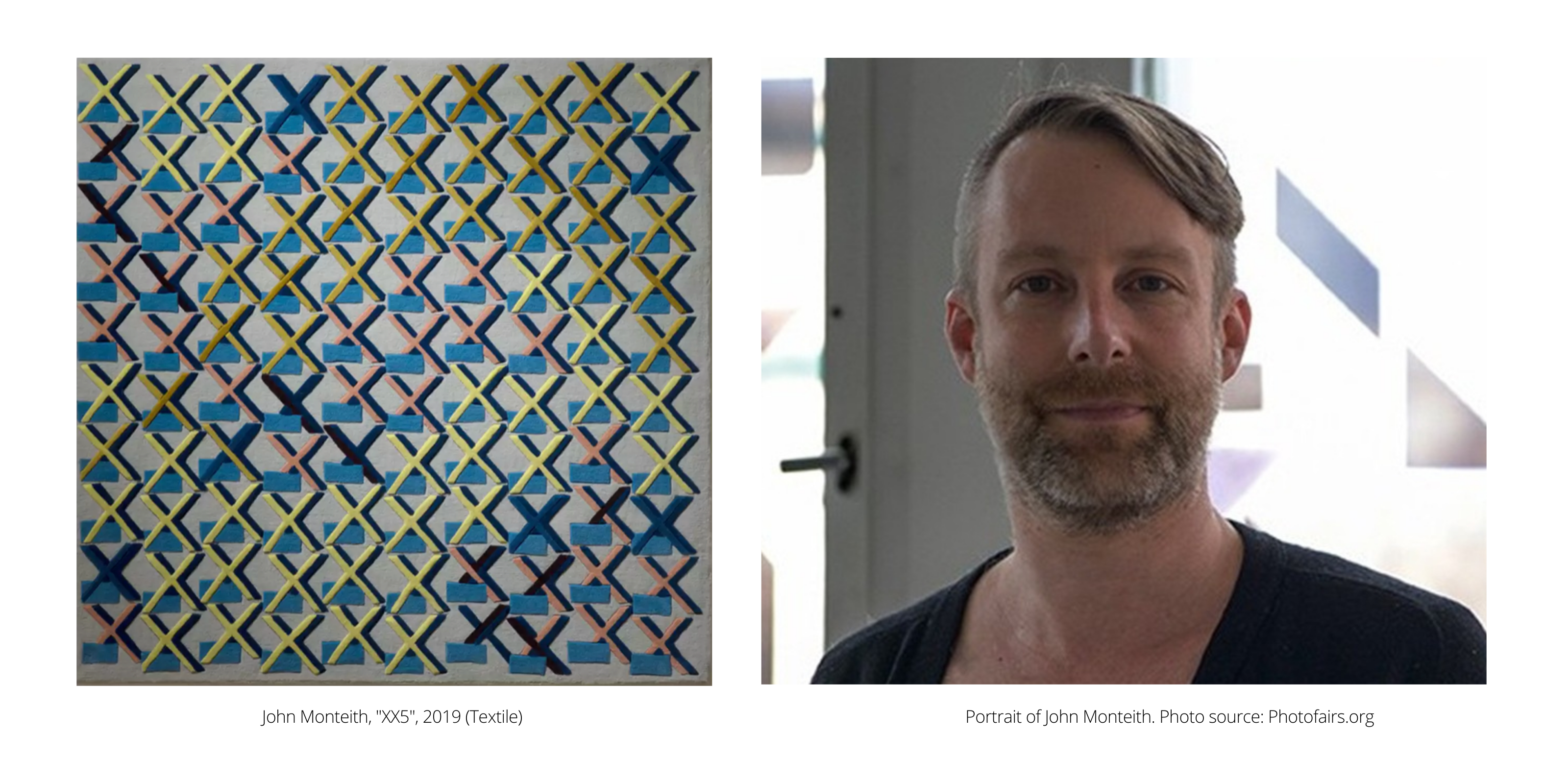 With a Constructivist mindset and a focus on spatiality, Canadian artist John Monteith (b.1973) appears to luxuriate in the multiplicity of mechanical forms.  This textile work contains an organised pattern of crosses, rectangles and negative space.  However, the arrangement is not perfectly aligned within a grid; instead, the forms vibrate along invisible demarcation lines.  Tension fluctuates through the shapes between what is revealed and what is concealed, alongside variations in two-dimensionality and three-dimensionality, constructed through chromatic distinctions.  There is no nucleus in this piece, indicating that the forms have colonised beyond the confines of their woollen boundaries.  Utilising a strict colour palette of yellow, blue and pink, the pigments appear to congregate in groups, forming clusters of clones within an optical framework.  This is an eye-catching fabric creation, with elements of architectonics and geometric abstraction.

Collage: ‘Lost in the Archive: Construction 1’ (2020) by Christine Davis 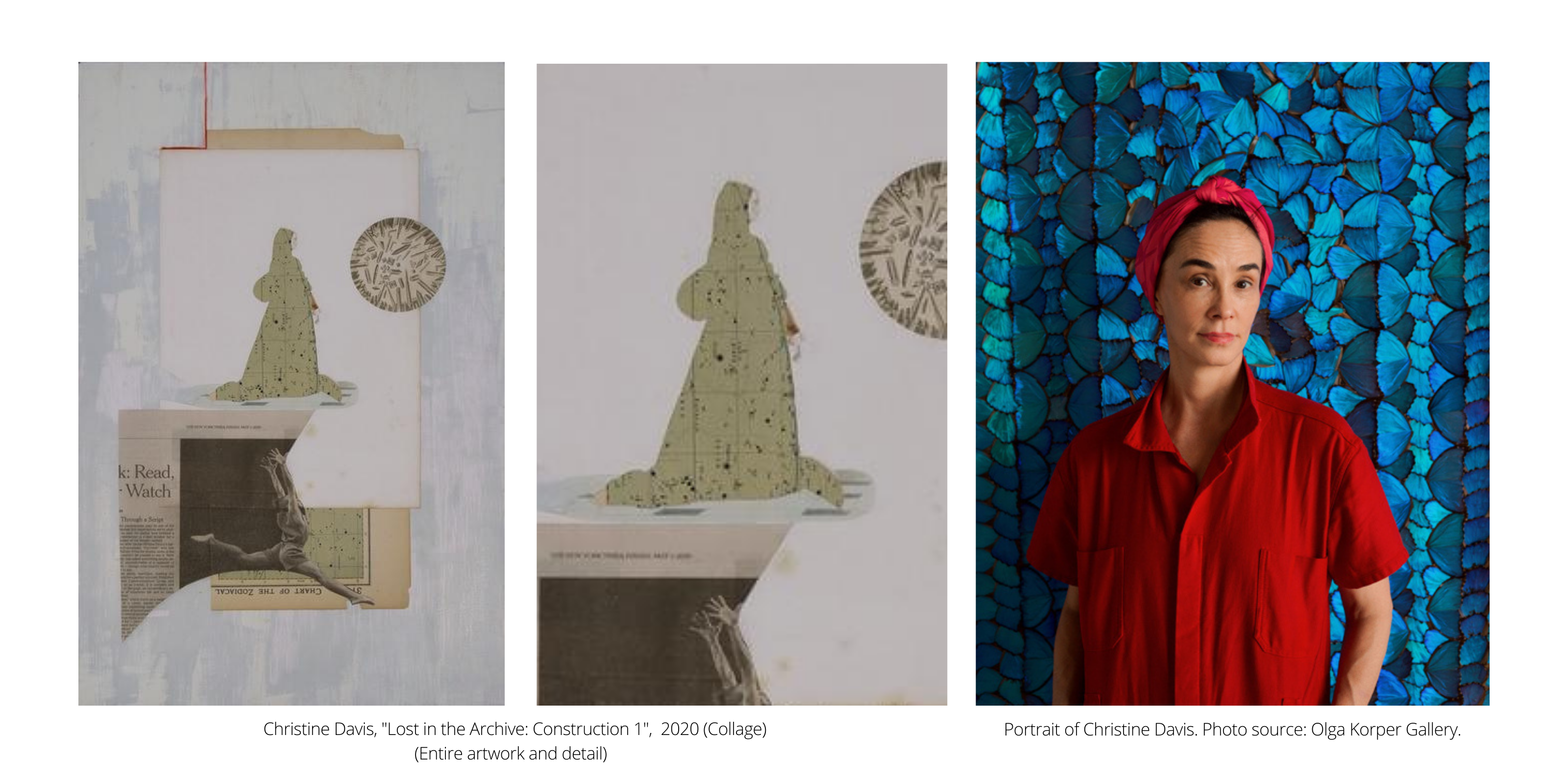 Resigned to incarceration in the pandemic lockdown of 2020 and recovering from Covid-19, Canadian artist Christine Davis (b. 1962) navigated the uncertain climate through photomontages fabricated from materials in her print archive.  Contemporary newspaper clippings, ancient manuscripts and esoteric literature fashioned the foundations of her polysemous collages.  Davis’ hieroglyphic vocabulary mysticises her quarantine experience, with references to current affairs and spirituality.  A date of May 1st 2020 on the newspaper in this piece clarifies the present day setting, with an animated, maskless dancer expressively leaping across the work.  A female character from Camille Bonnard’s influential ‘Costume Historique’ (1829 - 30) stands poised above the frolicking.  Her medieval garments have been redesigned to expose a constellation chart and zodiacal parchment.  It is visual therapy; a manifestation of Davis’ exploration of the uncharted and her search for meaning during a time of global turbulence.  This is a deceptively multifaceted piece that memorialises an universal moment in history. 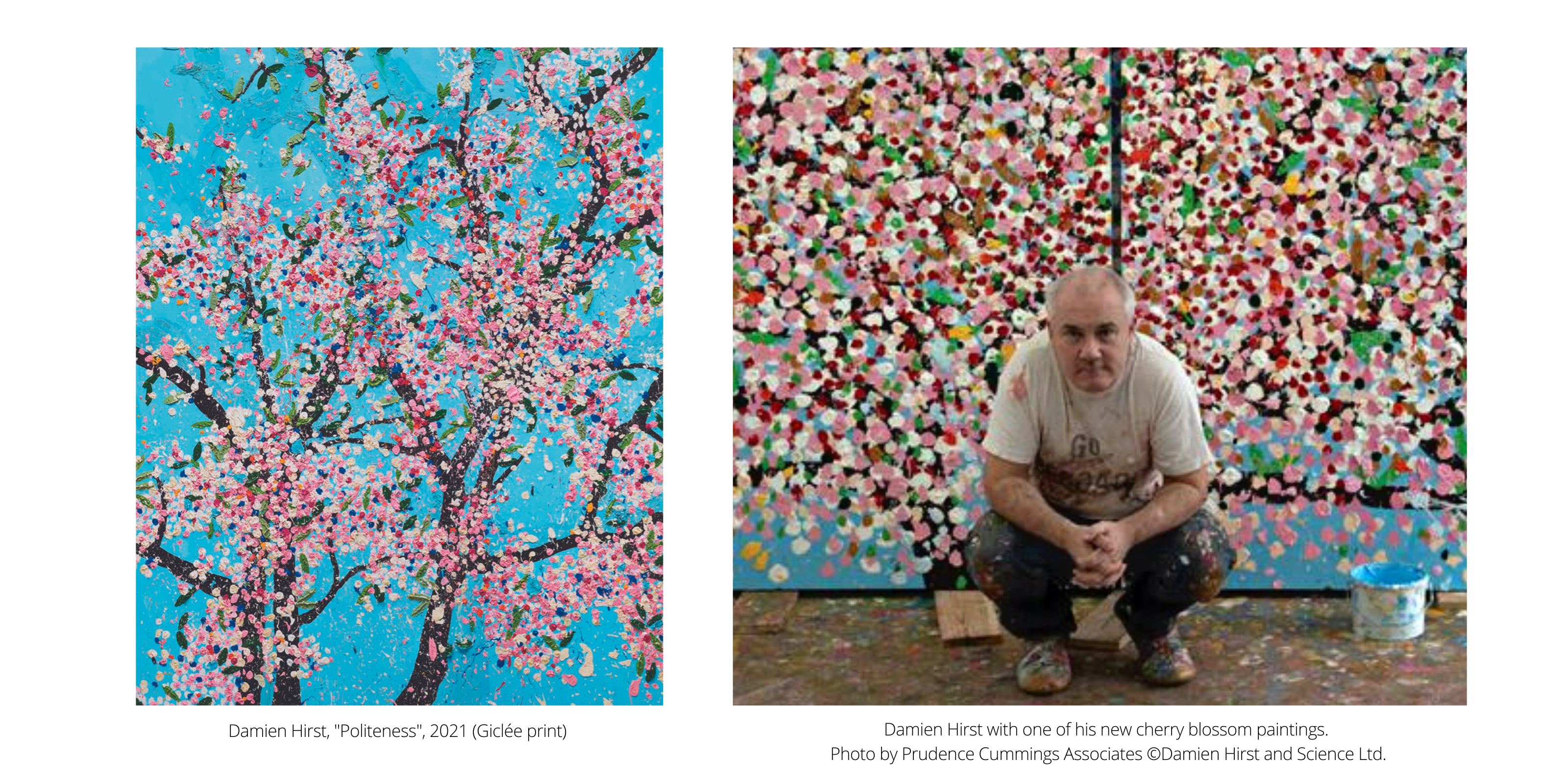 Containing elements redolent of Impressionism and Pointillism, this piece by British artist Damien Hirst (b. 1965) demonstrates surprising sensitivity and devotion to aesthetic harmony.  Inspired by Nitobe Inazō’s 1900’s publication about the Samurai code’s (Bushido) eight virtues, ‘Politeness’ proclaims the tranquility of nature.  Using cherry blossoms – trees synonymous with Japan, through its Buddhist and Shinto traditions – Hirst pays homage to the East Asian heritage of the virtues.  Daubs of paint generate the foliage, whilst the azure sky forms a cloudless backdrop.  The spontaneity and elegance of the tumbling blossom mirror the attributes analogous with politeness: grace, humility and gentility.  In its most transcendent form, Inazō considers politeness akin to love.  For an artist notorious for controversial formaldehyde installations and contentious sculptures, this print is a refreshingly authentic encapsulation of the significance of decorum, echoed in nature’s grandeur. 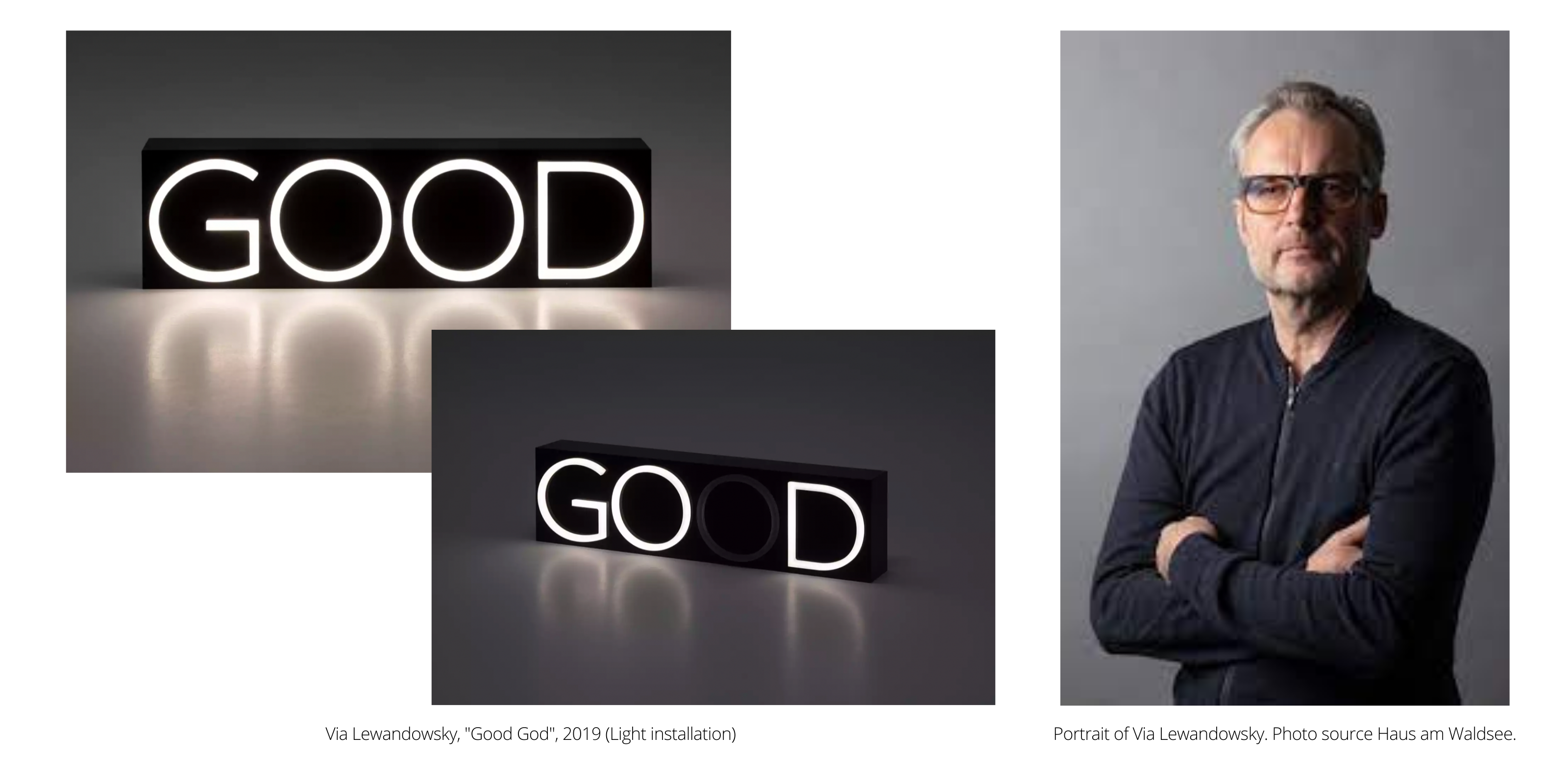 Light has long been associated with the divine and German artist Via Lewandowsky (b. 1963) manipulates this established link in this striking installation.  Both the words ‘Good’ and ‘God’ are illuminated in heavenly neon splendour.  However, in order to view the word ‘God’, the light of one letter must be switched off.  In doing so, ‘Good’ is cryptically diminished in order to reach ‘God’, insinuating that ‘God’ is less than ‘Good’.  The ambiguity of this implication is strengthened by the title’s connection to the idiomatic phrase, “Good God!”.  A versatile expression, it can be used in scenarios of surprise, shock, horror, joy, disgust and contempt, alongside various contradicting interpretations.  With simplicity and finesse, Lewandowsky has created a perplexing, yet absorbing artwork, and a reliable conversation-starter.