The lack of gender parity within the art world has been well-documented.  Despite Linda Nochlin’s influential 1971 essay, ‘Why Have There Been No Great Women Artists?’ and the feminist group Guerrilla Girls’ decades-long mission to highlight institutional sexism, male artists still maintain the largest market share at auction and the strongest presence in public collections.

Artscapy’s new Marketplace aims to rectify this by elevating women artists and creatives from underrepresented groups across their platform, working towards a more inclusive art world that reflects the breadth of cultural practitioners operating within the industry.  From sustainability to cryptocurrency, take a look at various topics being addressed by groundbreaking women artists currently showcased in Artscapy’s Marketplace: 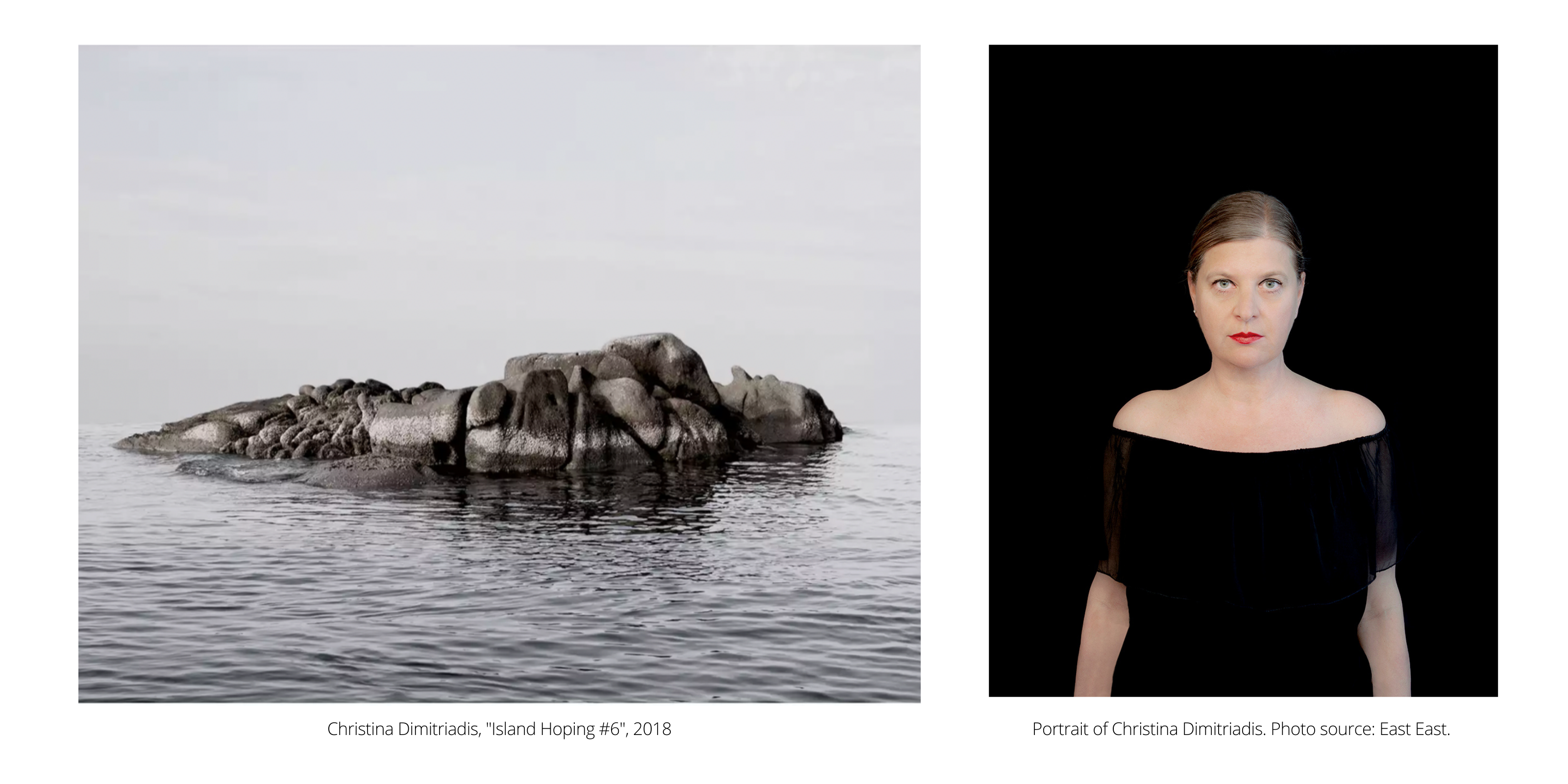 As a descendant of migrants, topics of deracination and domestic upheaval permeate Greek artist Christina Dimitriadis’ (b. 1967) oeuvre.  In this photograph, the jagged and uneven terrain of this Aegean island is unwelcoming and its bleak isolation is uninviting.  The scorched rocks are blackened from natural volcanic activity, resembling organic cauterisation: perhaps an attempt at protecting itself from an onslaught of people infecting its shores.  The contour of the land simulates a reclining figure floating in the water; half-submerged, the form lies lifeless in the vast expanse of the Mediterranean.  Despite this austere outlook, the title’s play on words (‘Hoping’ instead of ‘Hopping’) hints at optimism.  Part of a photographic series, Dimitriadis portrays the brutality of both the natural world and human impact in this image, mirroring both the marine context of the refugee crisis and hostilities encountered by evacuees. 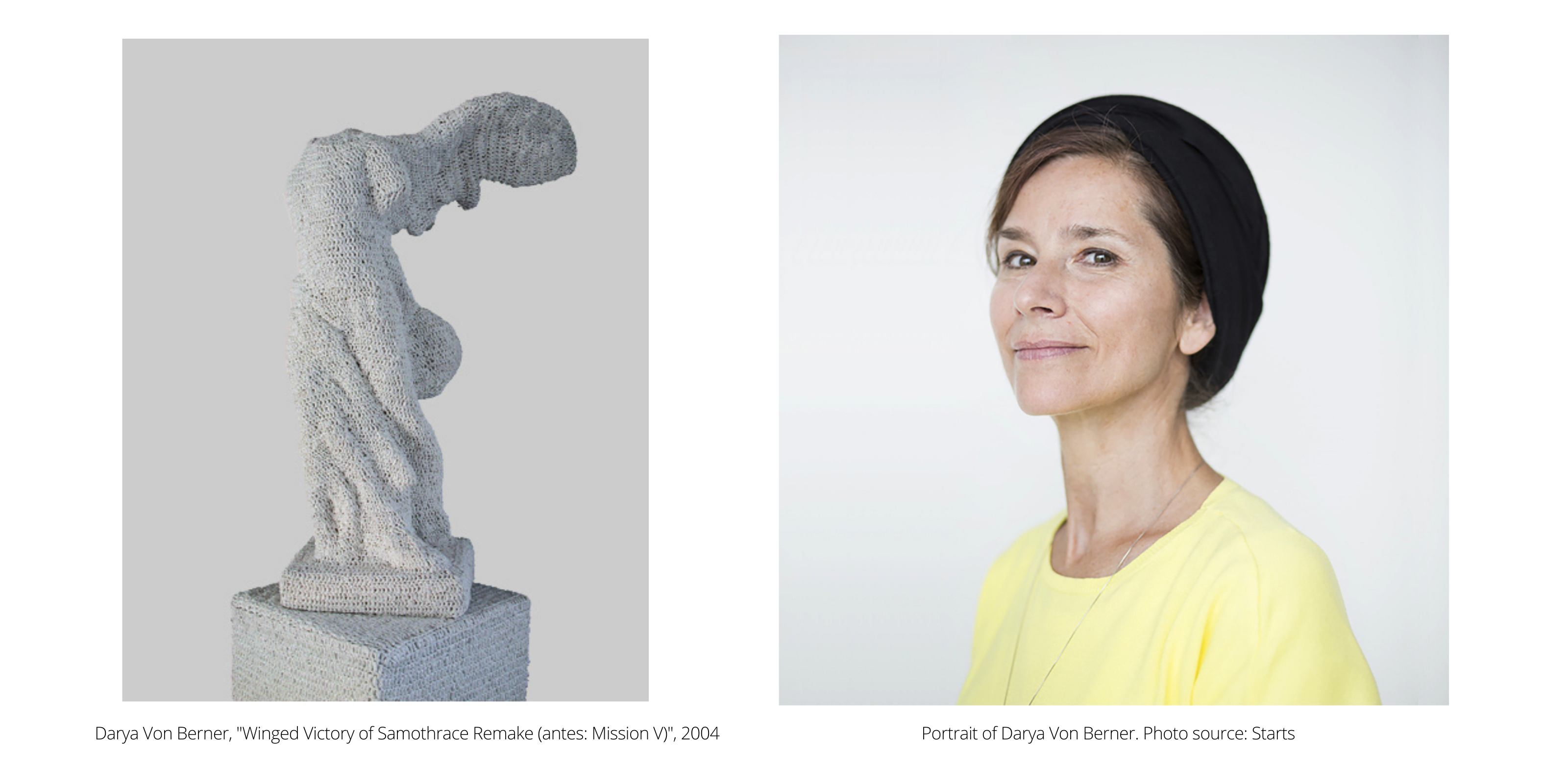 The ancient artefact ‘Winged Victory of Samothrace’ is reimagined in this impressive creation by Mexican artist Darya Von Berner.  Originally carved from Parian marble c.195 BC, this contemporary eulogy utilises recycled materials, such as plaster and crocheted plastic.  Enveloped in synthetic textiles, it serves as a response to Futurism, specifically the quote from founder Filippo Tommaso Marinetti: “We declare…a new beauty, the beauty of speed. A racing motor car…is more beautiful than the Victory of Samothrace.”  The Futurism Movement denunciated the past, in favour of the dynamism of modern life.  Whilst the subject and composition of this piece is similar to the ancient work, the delicacy of marble is replaced with substances that represent industrialisation and technological advancement.  Von Berner’s choice of salvaged materials alludes to neoteric concerns relating to sustainability, the environment and climate change. 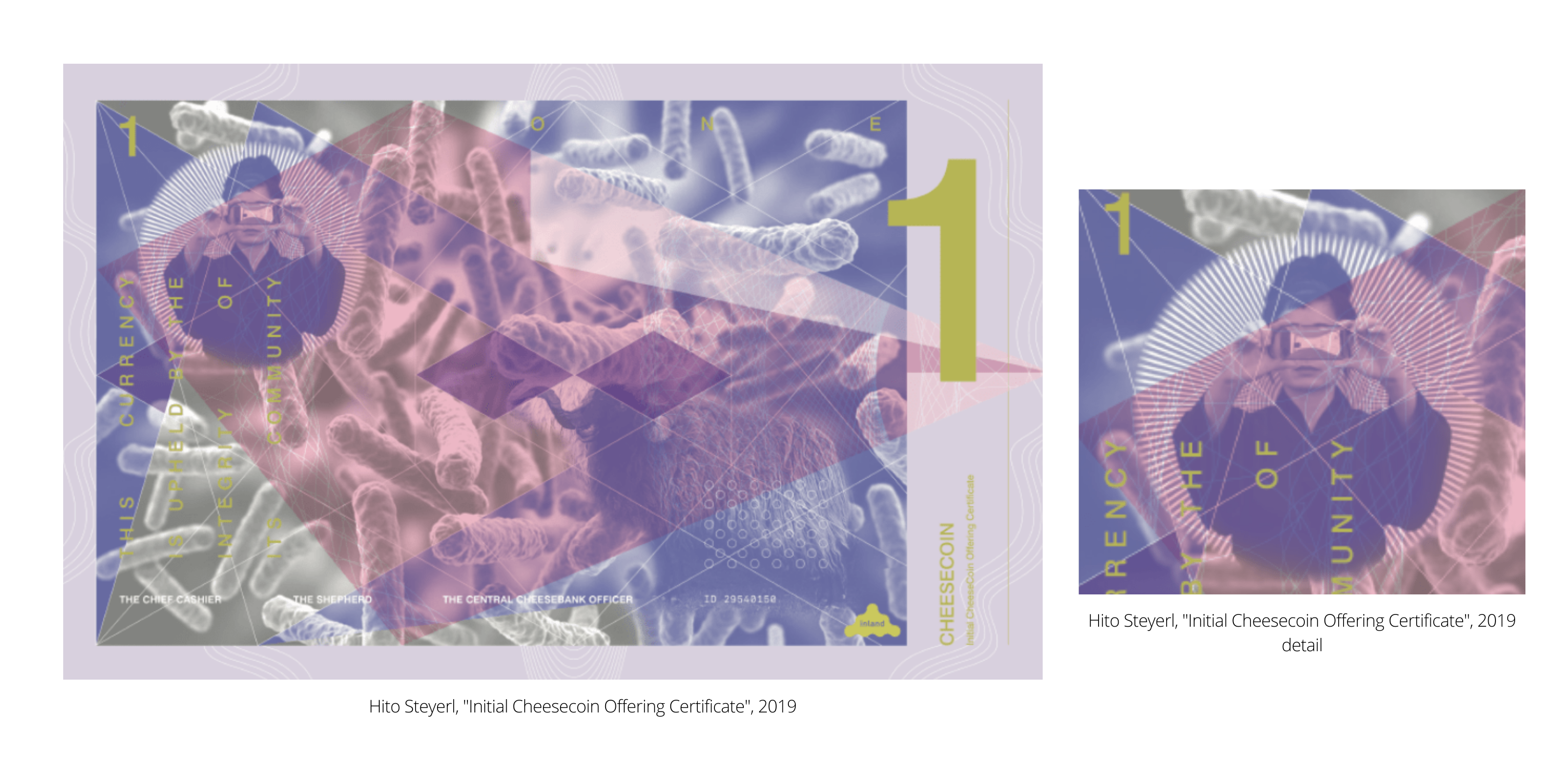 An observer of technology and the media, German artist Hito Steyerl has exploited cryptocurrency in this artwork, for the purpose of building a translocal commerce network.  Steyerl collaborated with agricultural arts collective INLAND on the creation of Cheesecoin, to support the commercialisation of cheese products created by The School of Shepherds initiative.  This is a special currency, based on the quantity of cheese they produce every year (one kilogram of cheese is equal to one cheesecoin).  This radical economy was designed with a socially-driven focus, reflected in the initial offering certificate being emblazoned with the motto; ’This currency is upheld by the integrity of its community’ and promoting a culture of morality amongst consumers.  Embellished with a translucent image of Lactobacillus Helveticus (bacteria used in the formulation of certain cheese), Steyerl uses progressive creativity and blockchain technology to campaign for local economic development.