Artscapy Collaborator, art historian and podcast host, Alexandra Steinacker-Clark, returns with a new regular column to bring you insights, personal anecdotes and deep dives into art collecting. The series will cover key topics from a unique point of view - that of a collector and an art professional. Alexandra will take you on a collector's journey and tell it as it is: no jargon, just art.

In this first article of the series we bring you an insider's scoop to this spring's auctions (and how you can buy art of a similar artistic calibre at a fraction of the price).

Picture this: The room is buzzing, paddles are at the ready, and a lot of chatter ensues as the auctioneer brings the hammer down to signify the start of the auction. If you are an experienced art collector, a gallery owner, or an arts professional in general, auction houses will probably be a familiar space for you. Names like Bonhams, Phillips, Christie’s, and Sotheby’s are known not just on the London art scene, but worldwide and far outside the confines of the art world. The auction season, with its peaks in spring and autumn, began this year's run by kicking off with some phenomenal modern and contemporary art sales. A number of stunning works came to the auction block and sold at impressive prices, setting records for many artists. A big spectacle and jaw-dropping prices indeed.

But contrary to what many think as they approach the world of art - that auctions are the key starting point (maybe even the only starting point if you ask some?) to buy quality art - you can actually skip the six-figure price tag that typically comes with it and still add meaningful art to your home and collection. In this article, I will uncover the bestsellers of this opening auction season, and show you how you can discover similar amazing works to add to your collection at a whole different budget.

One of my favourites from The Now Evening Auction which took place at Sotheby’s on March 2nd was Flora Yukhnovich’s ‘Warm, Wet ‘n’ Wild’. The estimate was GBP 150,000-200,000 and the work soared for GBP 2,697,000. Another work that garnered an impressive result at Phillips auction house in their 20th Century & Contemporary Art Day Sale on March 4th is by Cecily Brown. Brown's ‘Untitled’ had an estimate of GBP 30,000-40,000 and sold for double the high estimate at GBP 81,900. 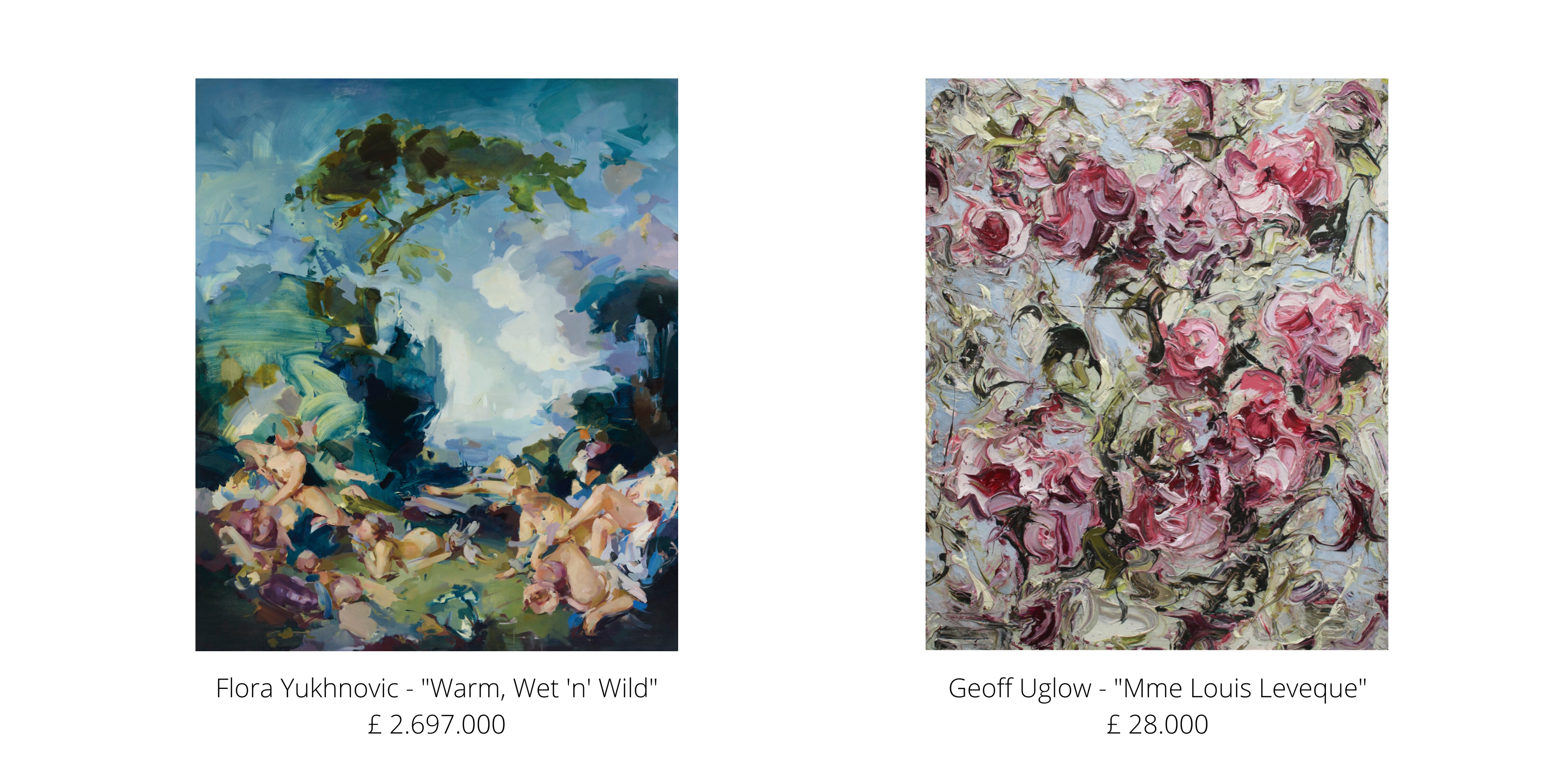 Considering the thickly layered paint and soft aesthetics of both Yuknovich and Brown, a work that has the same air of elegant chaos is the oil on linen piece ‘Mme Louis Leveque’ by Geoff Uglow on the Artscapy Marketplace. The canvas is large, 153.5 x 123 cm, so perfect for a wall space that will come to life with playful impasto brushstrokes similar to those of the big names in contemporary auctions.

Another big name in contemporary art, and someone who has dramatically shaken up the auction room in previous years, is the one and only Banksy. Back in 2018, he conducted a stunt like no other by building a shredder into the frame of one of his artworks for it to activate as Sotheby’s auctioneer Oliver Barker brought the hammer down at GBP 1 million. In 2021, the same work was re-sold at Sotheby’s for GBP 18.5 million. What an investment! One of my favorite works from Christie’s ‘Laugh Now but One Day We’ll Be in Charge: Banksy and 21st Century Editions’ sale between March 1st and March 15th was ‘Choose your Weapon’, a screenprint by Bansky with visual references to American artist Keith Haring in a gold colourway, indicating that this work is one of the 'VIP' gold and silver editions produced in limited numbers, selling for GBP 239,400. 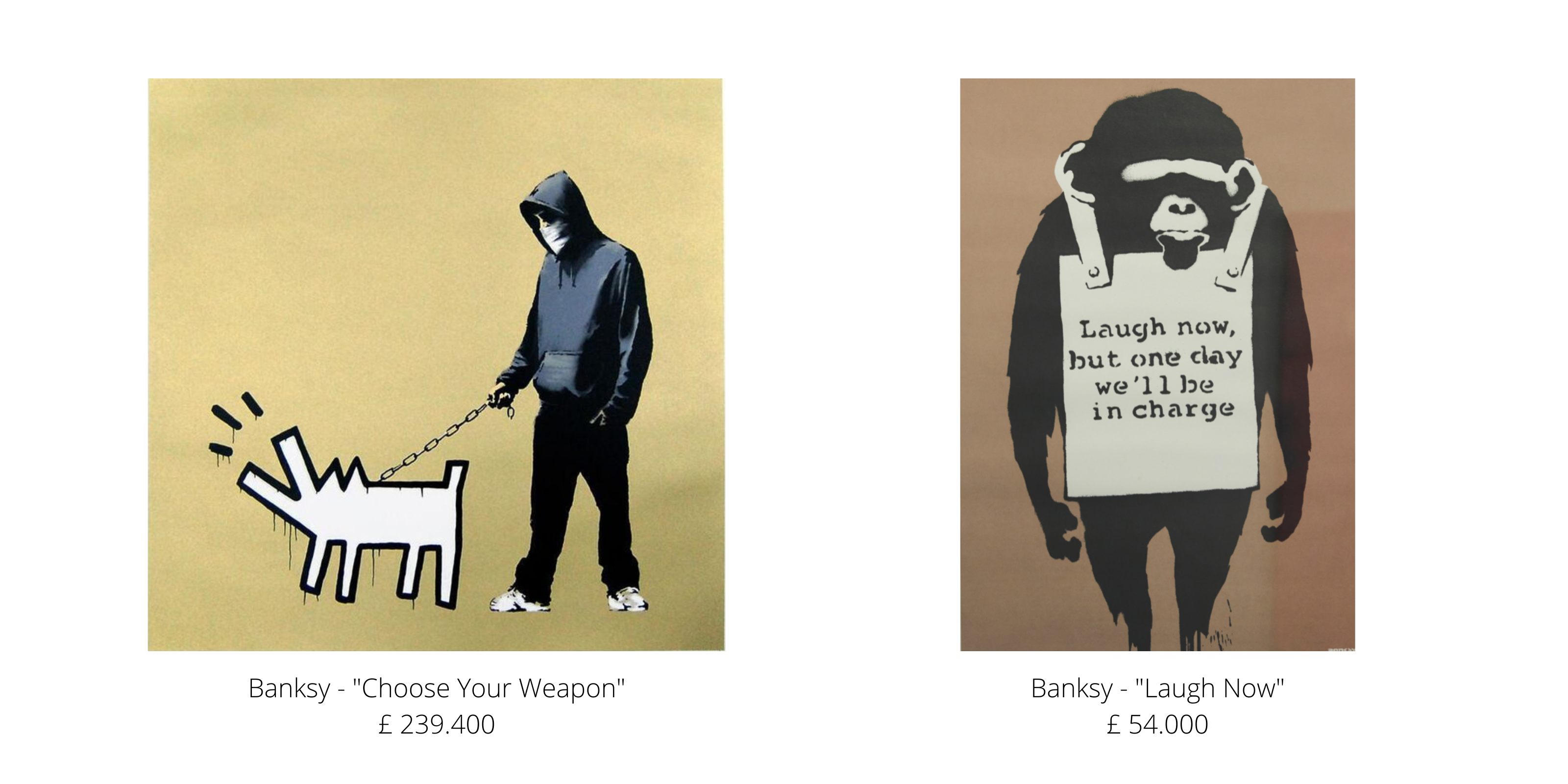 Works by the artist vary greatly depending on the medium and edition number, and Artscapy has a marvellous edition on their marketplace which, funnily enough, is the work that inspired the title of the Christie’s auction: ‘Laugh Now’ is a screenprint on paper with the stark sociopolitical commentary that the artist is best known for and is a great edition to add to any collector’s portfolio.

Artist Philip Guston is known for a figurative abstraction in his oeuvre. This may sound like an oxymoron but it produces a composition that is simultaneously familiar yet alien, with objects that are just out of reach of singular definition. In ‘Rain Cloud’ sold in the Sotheby’s Contemporary and Modern Art Evening Auction on March 2nd, the fleshy tones engulf the piece. The colours are typical of Guston’s early works in which he often created painterly layers of reds and pinks. 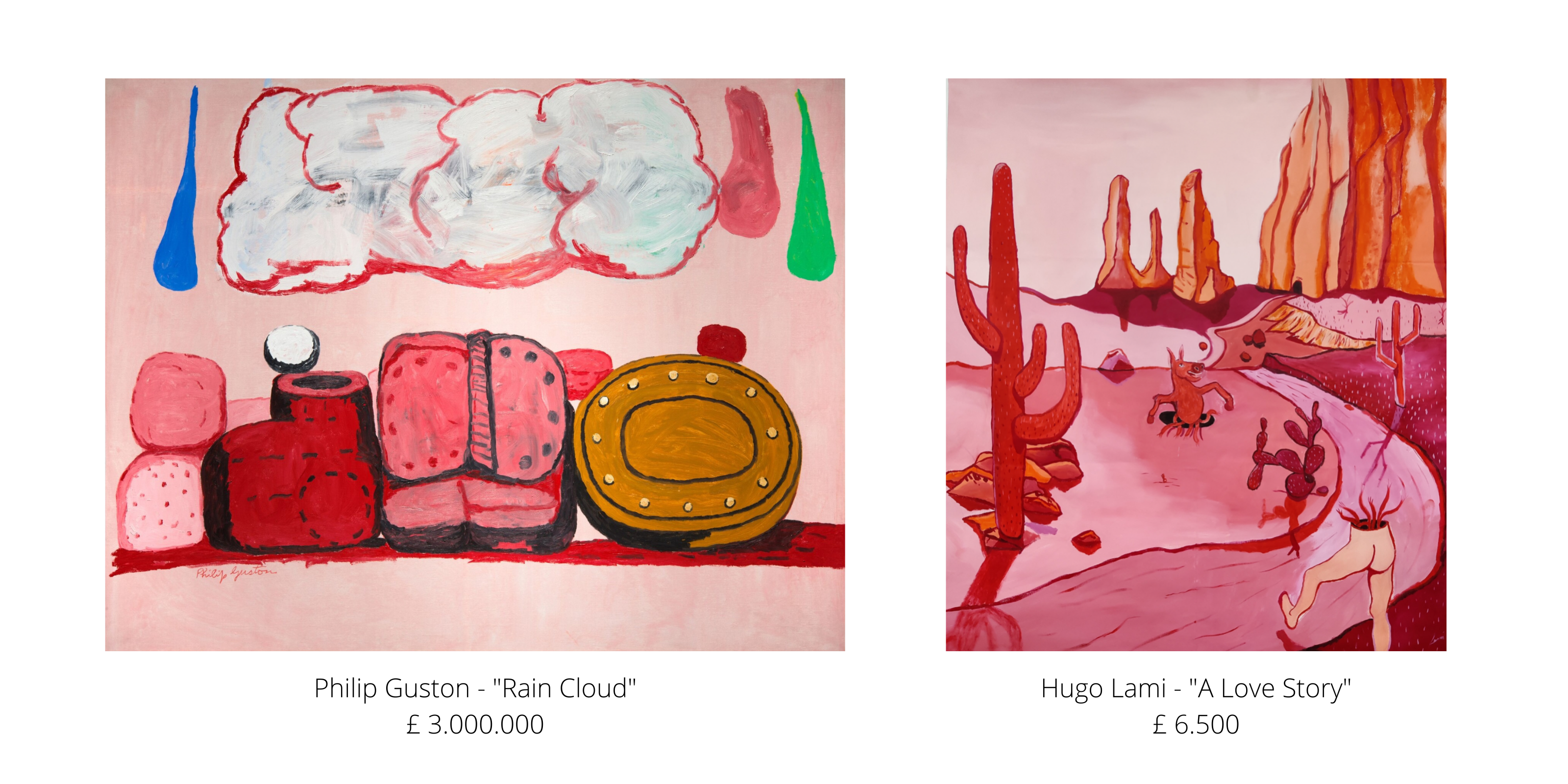 The layering of these colours ignites a feeling of surreality, something also very much present in the painting by Hugo Lami titled ‘A Love Story’ on the Artscapy Marketplace. With figurative anthropomorphic and animalistic forms surrounded by a saturated landscape of orange rocks, red cacti, and pink skies, Lami’s work maintains a similar quality of the familiar-yet-alien-oxymoron presented by Guston, but instead of the nearly GBP 3 million prices of the latter, Lami’s piece is available for GBP 6,500.

Needless to say, the auction season in London has kicked off with some exciting works of art ranging from well-established names well-known in the auction world to new emerging ones that have shown at auctions for the first time. If you are a passionate art collector, the stunning works that soar in price may not be within your budget (nor is it in mine!), but as you have read in this article, there are plenty of amazing pieces to collect if you want something similar in your home on Artscapy Marketplace, not only allowing you to own great pieces but also support smaller galleries, artists, and other collectors.