Summer has started, but Artscapy hasn't left for holidays. As part of our mission, we want to continue to share with you and showcase to you great, well-researched contemporary art. We are therefore especially proud to share with you our inaugural exhibition "Observing the Human" taking place 2-9 July at 98 Curtain Road in Shoreditch, London. If you're in town, be sure to stop by, see the show, and have a chat with us! If you're not here, don't worry, this is your go-to article for all the content you need to experience the show as if you were there.

So what is this show all about and why do we think you should see it?

It was born out of an encounter with artist Bongsu Park at her solo show at Rosenfeld Gallery in London. During the show, Artscapy's founders, Alessandro and Emilia, spoke with Bongsu and she recounted how artists like her and Ga Ram Kim are interrogating and pushing themselves in exploring new artistic expressions, and how technology plays a key role in this. They use technology not for technology's sake, but as an enabler of artistic research and expression. Struck by this, and its linkage with our mission to promote thought-provoking contemporary art, the collaboration between Artscapy and the artist collective that Bongsu and Ga Ram leads, called Noonssup, came to be. 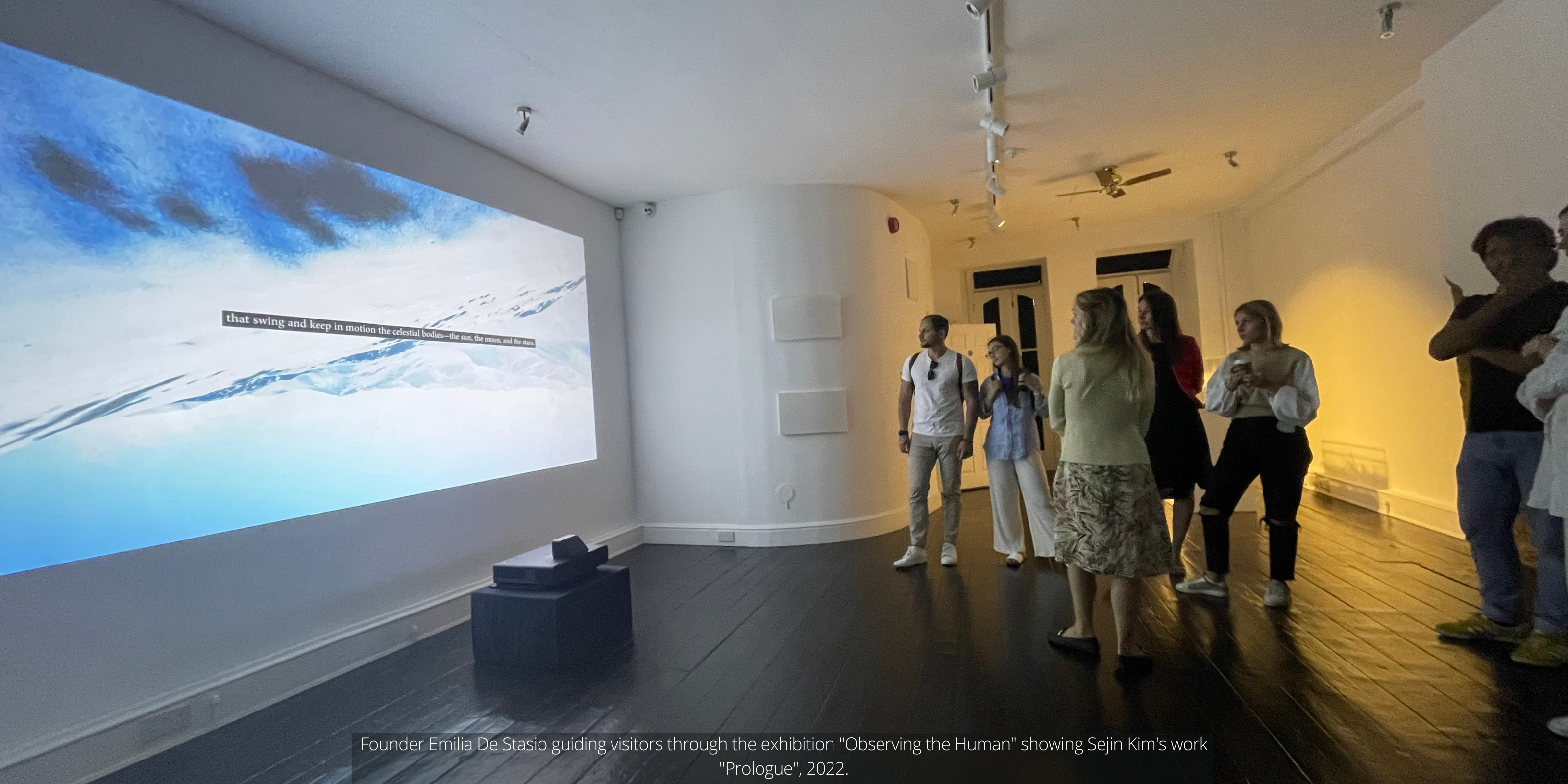 The collaboration is driven by a shared desire to showcase rigorous contemporary artistic research whose message is uniquely expressed through technology - in this case NFTs - and make this new stream of art more accessible to collectors and the wider public.

The show brings together five internationally renowned and institutionally collected Korean artists to offer their interpretations of observing human nature. We journey through sensorial experiences, onto the emotional, and into the subconscious, investigating what it means to be human. Beyond traversing different themes within the human experience, the works also cross different mediums, from video, to sound, to performance, and into a futuristic appeal for a virtual reality in which we can share and uncover dreams.

Intrigued? Here's all you need to know:

Below you can immerse yourself in the curatorial description of the show that gives you a taste of how you might interpret the exhibition and some of the questions raised.

Our Viewing Room where you can explore and buy the NFT artworks on display.

An Article about the show written by our Art Writer, Bianca Spaggiari.

The act of observation entails the active acquisition, through the use of the senses, of information from some primary source. It is a sensory experience that goes beyond sight, engendering a linkage between that which is consciously perceived and that which becomes subconsciously felt.

‘Observing the Human’ presents a journey into human perception - observation - that is enhanced or perhaps rather, distorted, by the advent of the next chapter in technological advancement. The journey is itself international and borderless, arriving in London as the interpretations of five South Korean artists under the collective project, Noonssup, led by Bongsu Park and Ga Ram Kim, and brought to life by London-based and European-founded collector platform Artscapy.

Faced with the challenge of turning the intimate, self-reflecting act of observation into an artistic act that is outward facing, curious, and explorative, a number of questions emerge. Who is the observer now? Is it the artist during the creative process, or is it the viewer? Is the observation real and tangible, or is it something that transcends our direct sensorial conscious inputs into the subconscious, into the metaversal? Or is it the inanimate artwork itself that triggers the active observation of the viewer to connect with human collectivity and the wider universe? Or an attempt to show what an ultra-human universe may become?

Five distinct points of observation on human nature are brought together in this exhibition, where each concept sprouts from roots in South Korean contemporary culture and iconography. The stems then grow in different directions into the human experience, into observation, applying each different mediums of expression, powered by the new opportunities that technology offers. In particular, each work has a unique tie to technology as a non-fungible token (NFT), whether the token stores the artwork directly or acts as a right to access the artwork. At every point, the viewer is invited to participate and actively, or passively, allow observation to unfold. 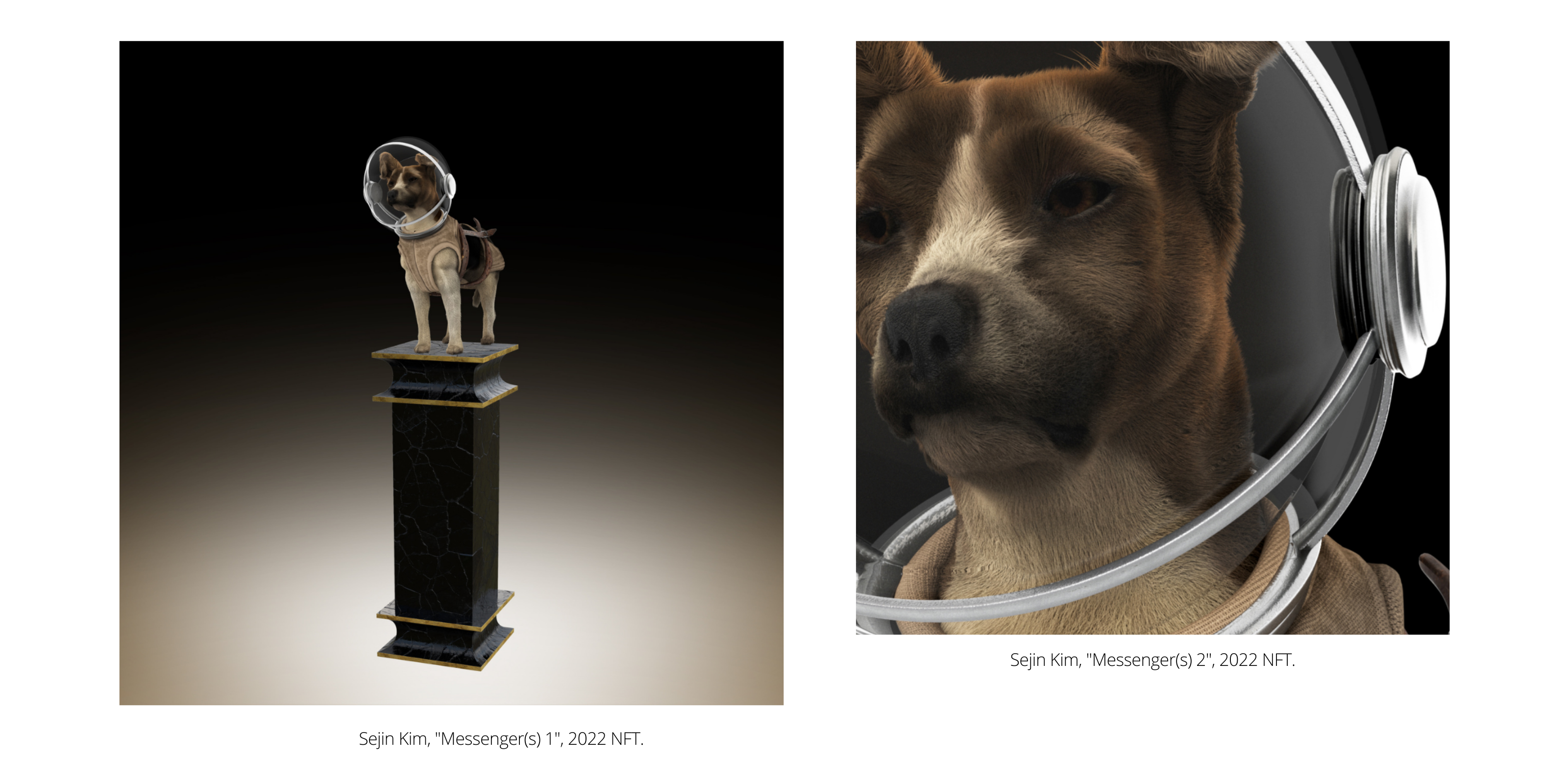 Commencing the journey, we depart from Sejin Kim’s highly relevant and powerful work that observes our epic movement into space. The ‘Messenger’ originated from exploration into human centred civilization. The work references the German philosopher, Hannah Arendt’s 1958 ‘The Human Condition’ with the USSR’s 1957 launch of Sputnik mission 2 and Laika the space dog. Evolving from exploration into the Western ambition for colonisation, the work highlights the implications of man’s more recent move to space and asks whether space will ultimately provide the seclusion the human race appears to seek. Despite the power of the subject matter, Kim’s poetic and often meditative  delivery offers her audience space for reflection and contemplation. 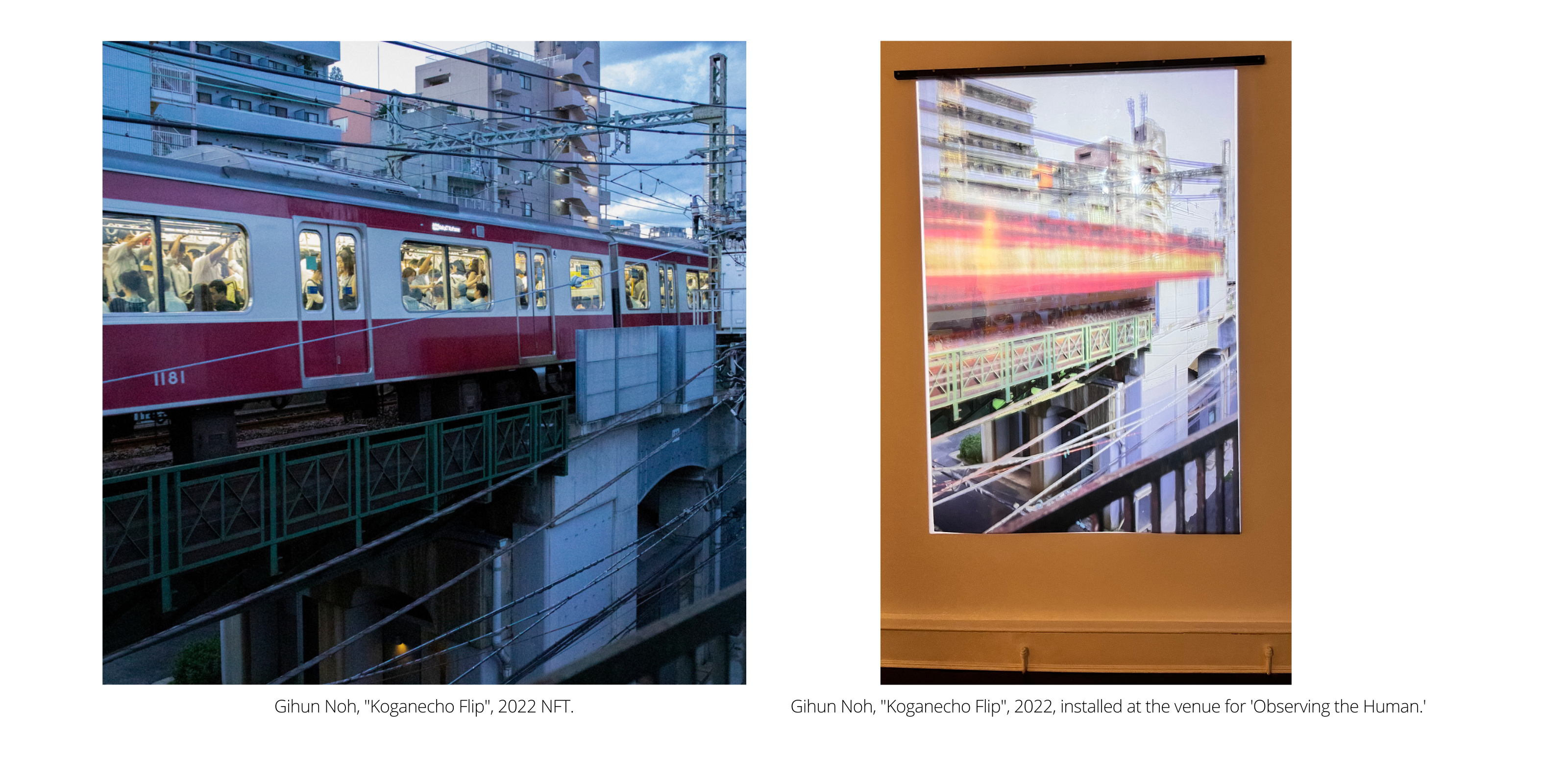 The intimate observation of our fast paced life is captured by Gihun Noh in 683 photographs in the work Koganecho Flip. Shot across a little under 24 hours from a single, static observation point where the only variable element between two shots is time, the work asks fundamental questions relating to observation and human existence within the passage of time. The exact same shot, not moved even a millimetre in any cardinal direction, is it still the same shot, the same moment, if one second has passed in between? It isn’t the same observation, it isn’t the same sensorial collection of information. What happens when those observations merge into a single superimposition - can it be a manifestation of the implosion of the observance of time where past and present becomes one? 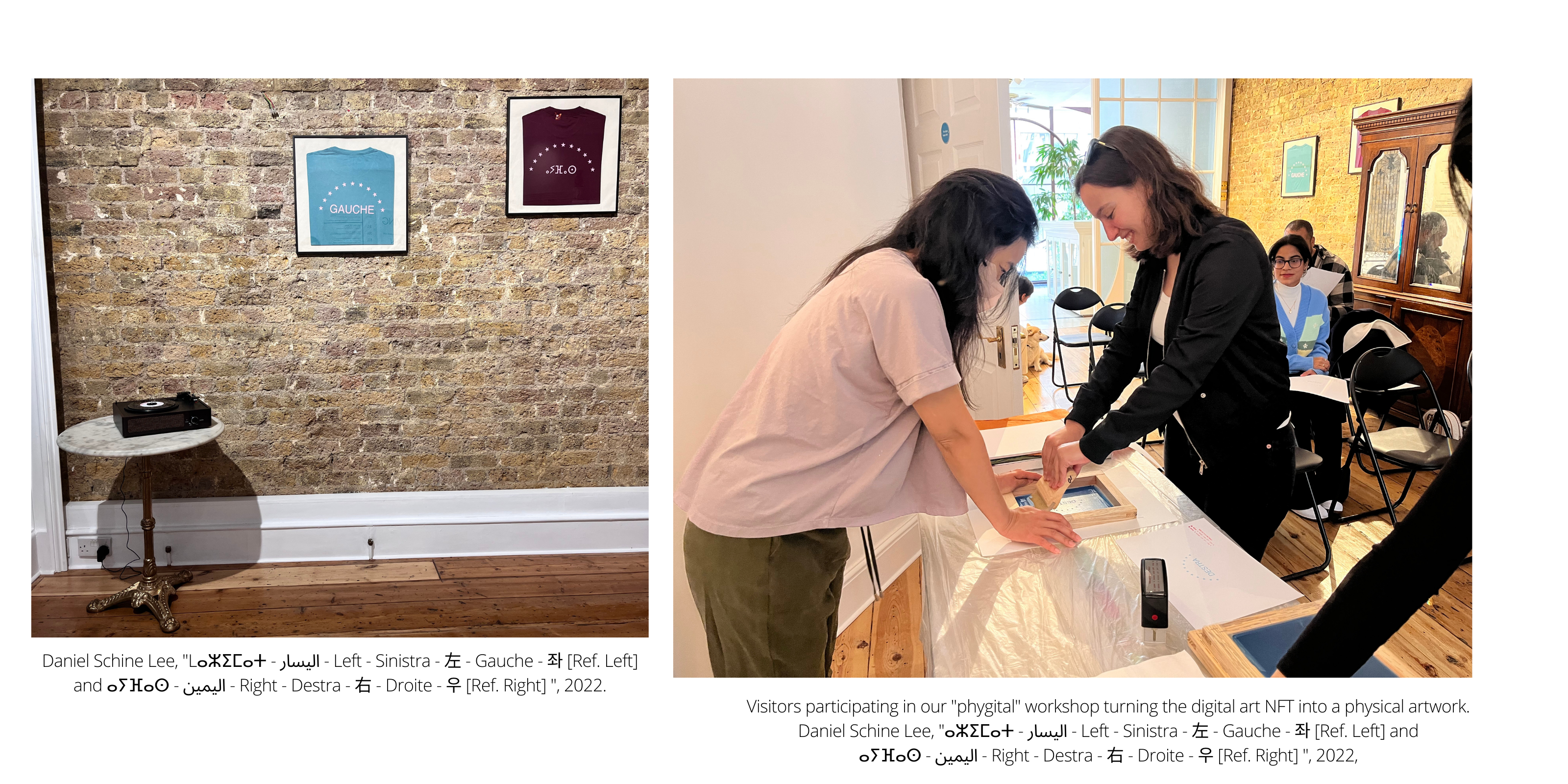 The endless dichotomy of the cosmic (dis)order is synthesised in the human categorisation of what is ‘Left’ and what is ‘Right’ or what is an ‘A side’ compared to a ‘B side’ by the artist Daniel Schine Lee. The artist encourages the viewer to detract any political or social meaning of these words, Left against Right, in order to focus on the universality of existence. This binary delineation is both literally and figuratively lost in translation through the juxtaposition of the two words in seven languages. The zenith of this experimental observation is achieved by also blurring the, until now, insurmountable line between the digital and the physical. This NFT artwork allows the holder to observe the digital artwork as it is, or opt to bring it into the physical world as a garment print pattern. This playful interpretation further serves to undermine the power of hard lines and borders in an increasingly fluid world. 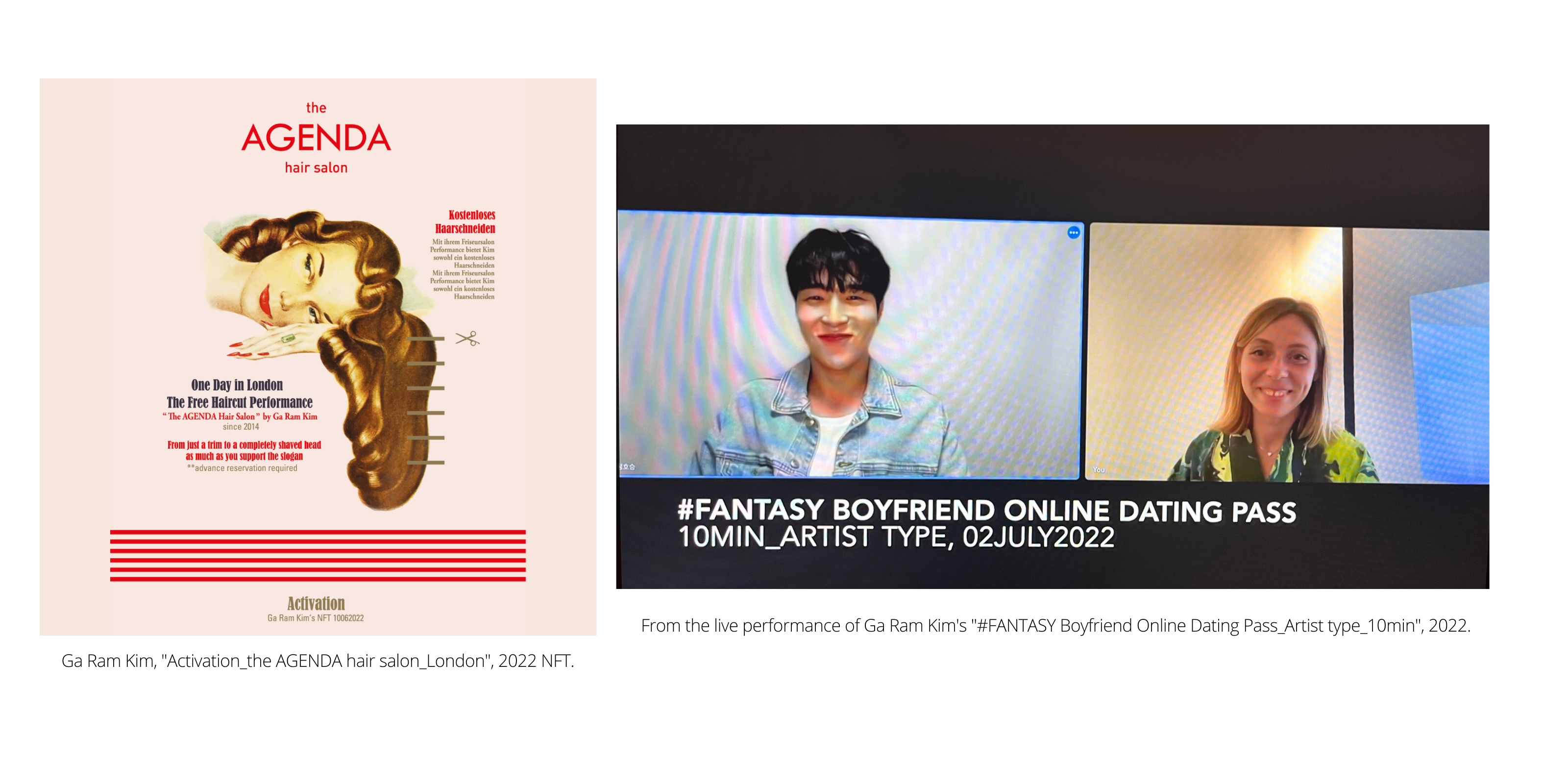 The observation of the virtual compared with the lived, physical reality, and how that in turn impacts human existence and behaviour lies at the heart of Ga Ram Kim’s work. The profundity of human emotion, and that which is among the strongest of them all - love - comes into question as Kim observes the human romantic relationship. Technology has enabled the possibility of virtual relationships, void of physical contact, to take hold. With increased information availability, indeed sensory overload, unadulterated observation appears to dissipate as relations become subject to arbitrary design, as the viewer selects the personality of their ‘fantasy’ romantic partner, rather than being a choice of the heart. In a humorous way, Kim brings to the fore the observations of our internal emotional compass and exposes how its associated preconceptions impact what may subsequently be perceived as a genuine spontaneous human bond.

Whether, and to which extent, that internal compass holds true in practice is the subject of Kim’s second performative artwork that is featured in this exhibition. Again, humour and a lightheartedness that must not be mistaken for shallow investigation, plays out as the viewer is invited into Kim’s hair salon. Here, the visitor reflects their agreement with the political or controversial social viewpoints at hand by the degree of the haircut agreed that corresponds to that viewpoint. In this way the banality of a haircut becomes an active act of protest, and simultaneously a force of reckoning to observe where limits to our integrity of opinion emerge. At the same time, the setting of the hair salon - with its social ties as a place of discourse and debate - invites the viewer to reconnect with how culture informs and shapes humanity. 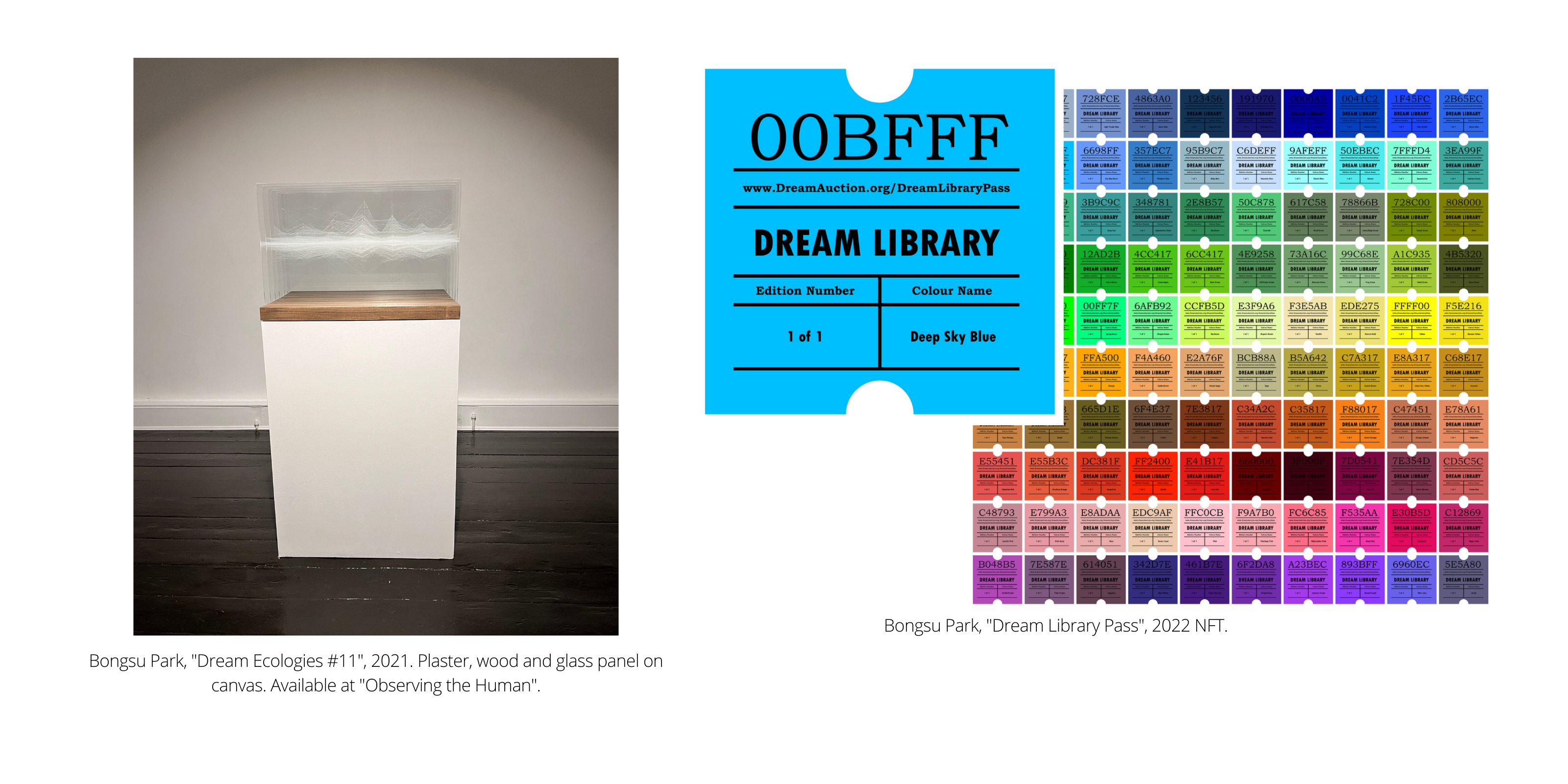 Dreams are generally understood as representations of our innermost thoughts and feelings as human beings. Subject to this premise, observing the meaning, influence, and auspiciousness of dreams then have the potential to unlock significant keys into understanding human nature. Inspired by the deep-rooted Korean tradition of buying and selling dreams as a way of sharing personal contemplation which exist outside the material realm, Bongsu Park’s dream project carries important cultural and investigative connotations. The power of trading dreams is profoundly social, personal and intimate. Park recognises this and offers her viewers similarly profound moments for experiencing dreams and the collective subconscious. As the subconscious blurs with the conscious, and dreams become prophecies and aspirations, viewers are invited to depart from their present physical existence to transverse into the digital by entering a metaverse collective space in which dreams can be shared, exchanged, and explored. The Dream Library Pass, the NFT artwork from Park available at the exhibition, serves as the entry ticket into this next level of dream exploration in the metaverse.

The dream project has taken many shapes and forms throughout the investigation and observation of Park. The vastness of the dream landscape intertwines with cultural roots to open a window into observing human nature. The act of dream sharing creates a bond of human connection and this is visualised in the series “Dream Ecologies” by Park, available to buy as a physical artwork from the exhibition. These works, made as plaster, wood, and glass panel on canvas, reflect the outcome of a concept known as ‘social dreaming’ in which dreams are collectively exchanged and shared, therefore offering a completely new lens through which to observe humanity.

The art on display at “Observing the Human”, separately and collectively inform each other, inviting the visitor to shape a new outlook on humanity and perspectives on themselves.