Through installation, digital art, and interactive projects Ga Ram Kim constantly investigated the relation between social media and cultural issues. Ga Ram's practice inviting the viewer to activate her projects, has generated a lot of attention amongst the exhibits of our 'Observing the Human' exhibition, which is currently on view. This is why, we have entrusted Alexandra Steinacker-Clark with the mission to interview Ga Ram, and give us an exclusive insight to her practise and the importance of the participatory experience in her works.

You are exhibiting your interactive work titled #Fantasy, which involves the viewer having an exchange with one of the virtual boyfriends you conceptualized. What inspired this work?

I am interested in the way people relate to each other through the media today.

This work was created in 2020, after Covid-19 changed the way we live our lives. I began to notice that people spent more time in virtual relationships than ever before. During the pandemic, I also found that self-narrated broadcast channels on YouTube became popular. On these channels, a host speaks to the viewers in a friendly manner, asking caring questions such as “how’s your day been?” or saying nice things like “sweet dreams”. When we hear the term “virtual lovers”, which is what these channels are often referred to as, we may mistakenly imagine something sensual or erotic in nature. Instead, it is a broadcast where the host personally cares about the viewer’s wellbeing by asking questions and making small talk. Viewership on these channels has grown throughout the last few years and has become immensely popular. I saw this as a way for people to relieve loneliness in the era of the covid-19 pandemic.

When online relationships began to emerge as the World Wide Web was used more frequently, these relationships were often deemed inauthentic or 'fake', with many making the assumption that online connections could not mean anything. However, after years of familiarity with SNS (Social Networking Sites) and YouTube, the new relationships that people are building in these platforms are now considered the “new normal” and are a perfectly viable means of interacting with one another.

With all of this in mind, the blurring of the boundaries between virtuality and reality is a critical point in the project “Fantasy Boyfriend”. 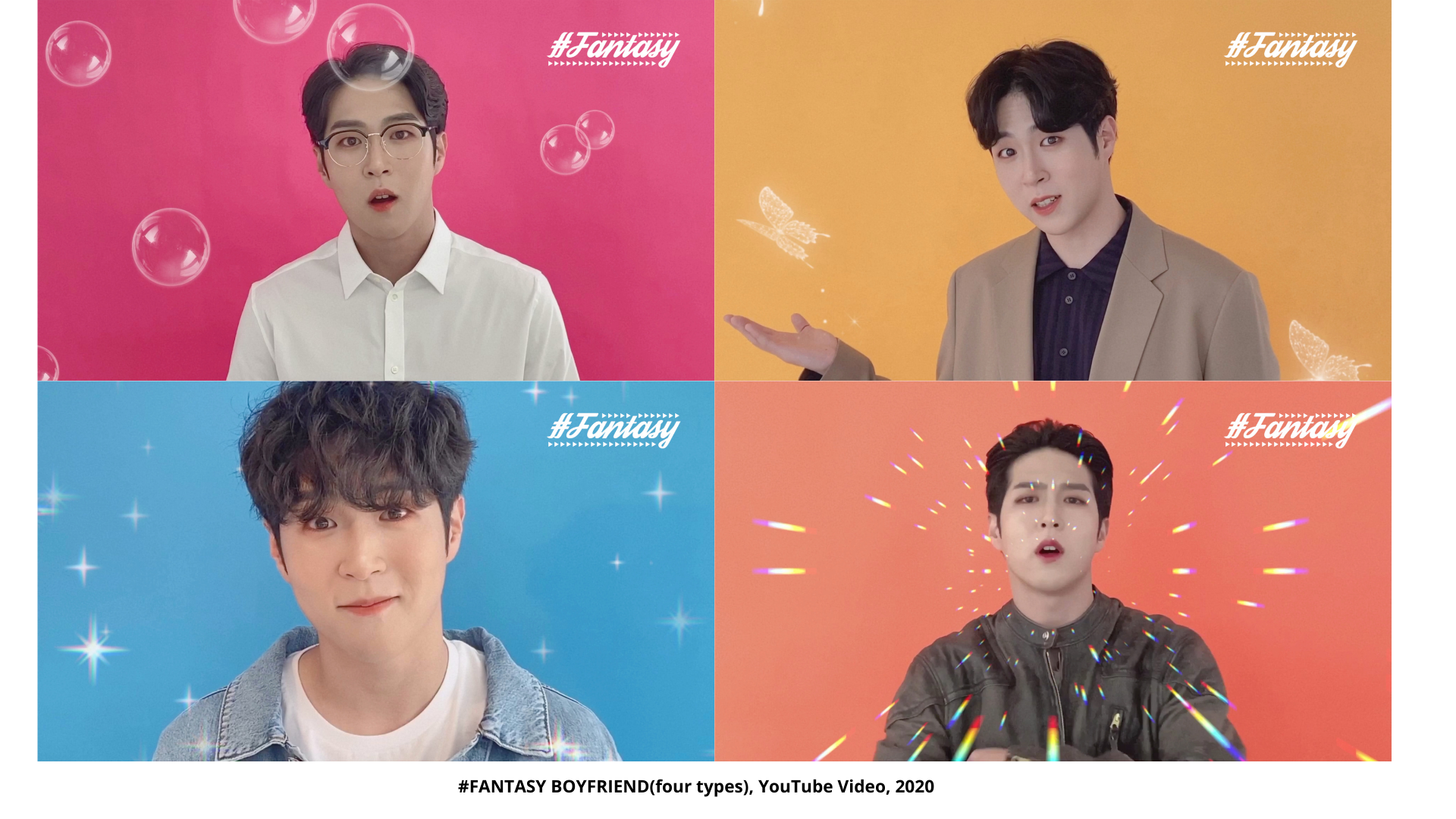 In a digital age, how do you think the relationship between art space and audience has changed for us?

We can definitely observe a difference in the way people enjoy exhibitions. In fact, I made a work that reflects this difference and it’s titled #SELSTAR (2016). Taking pictures in an exhibition was once considered uncultivated, but since the emergence of the smartphone era, SNS was invented and it's changed the way we live, view, and document our lives - including the art scene. Taking selfies with works of art has become a new trend. No one is ashamed of this now. Almost every exhibition allows and even encourages people to take images and upload them online.

In 2016 in Korea, when #SELSTAR was created, the question of whether art museums and exhibitions should allow visitors to take pictures was still a topic of controversy. In that time, a new art museum called "Daelim museum" had garnered large success; they had decided not to follow the traditional behaviors of a Korean art museum at the time. They didn't limit the amount of people in an exhibition or attempt to reduce the noise from visitors. They allowed viewers to take photos and selfies, and they even promoted it by stating "if you have our membership, you can get a free coffee”. They appeared to have treated the 'museum membership' with the same approach as one would treat a "shopping membership" - and, as was possibly their goal, the exhibition space ended up looking like a department store during the Christmas holidays.

It became constantly crowded and packed with visitors, which hindered others in viewing the artworks. For artists and curators, Daelim was not considered a quality place to visit. However, there was an aspect of Daelim that allowed for its popularity to grow, and it was that people recorded their experiences and uploaded them onto their social media. It has become a really powerful tool, especially for those who have never visited the art museum. Through the dissemination of images online, the place became one of the most popular hangouts for young people.

Now here is the juicy bit of the story: I discovered that other art museums sent their staff to visit Daelim, pretending to be normal visitors, all the while observing how the museum functioned and how the viewers interacted with the exhibitions. These museums ignored Daelim officially, but I think they also felt envy through the way in which Daelim was able to attract the attention of the general public. Funnily enough, in 2016, Chief Directors and Curators of the Guggenheim in New York visited Daelim to see what was going on, as well.

So, I thought "How about I make an art work which can only be operated by taking a selfie and interacting with SNS by the public!" 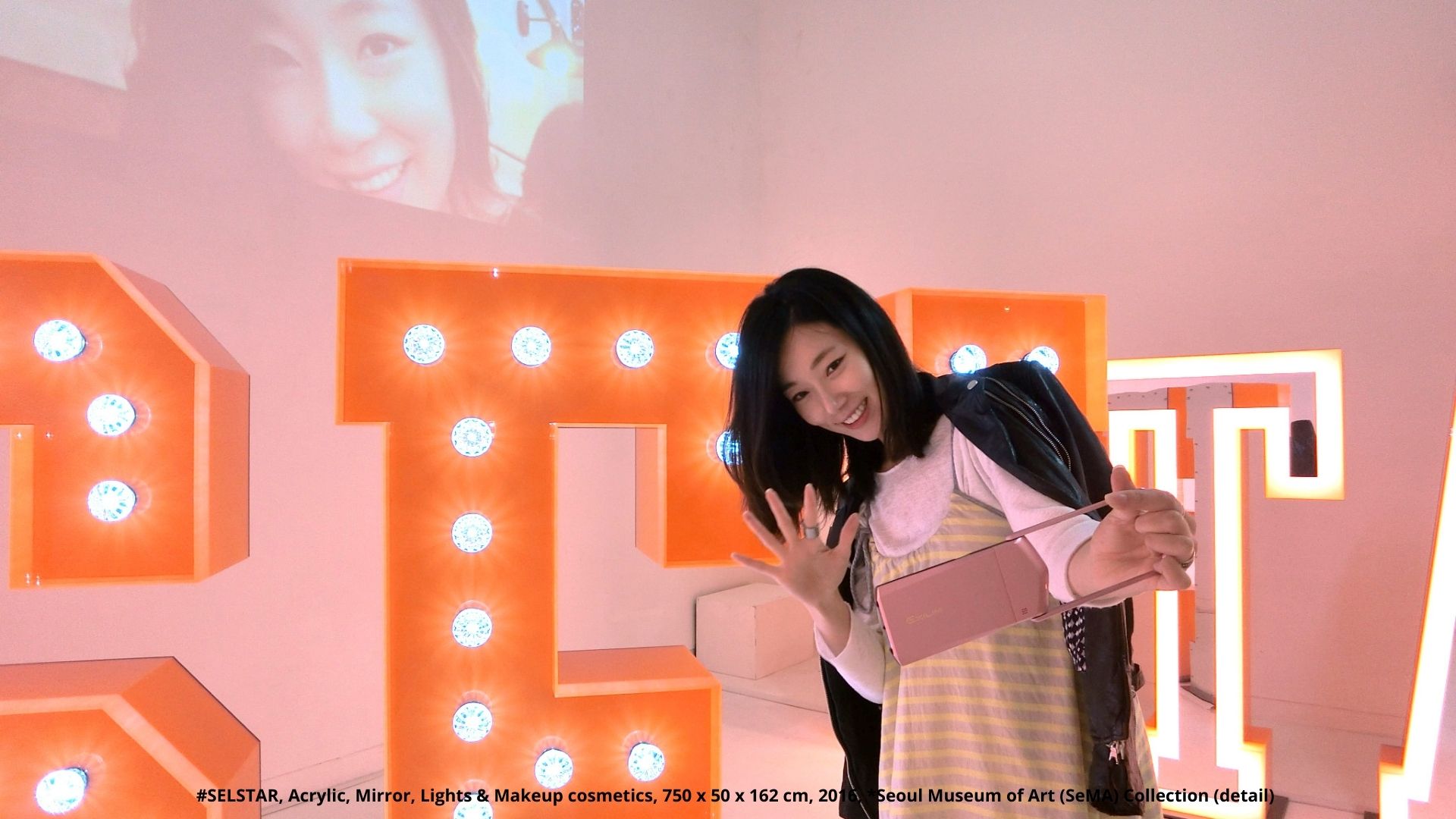 With my work, I say to the viewer "Do you want a better selfie in the museum? Here, there are hundreds of make-up kits you can use to create your better selfie! First, do your make up. The, take a selfie with #SELSTAR. Then you are ready to upload it onto your SNS!” In this work, the visitors of the exhibition take center stage, and #SELSTAR becomes the stage background.

Fortunately, my experiment was hugely successful in 2017 in the show "#Selfie - The People Who Take Pictures By Themselves" in Savina Art Museum. #SELSTAR was all over the SNS while the museum recorded the most visitors it has ever had. To top it off, the show was granted “Art of the Year” by the Ministry of Culture.

Just to add, the Daelim Museum is not the same as it once was. It is housed in a new building that is in very good condition, and has become a reputable museum. 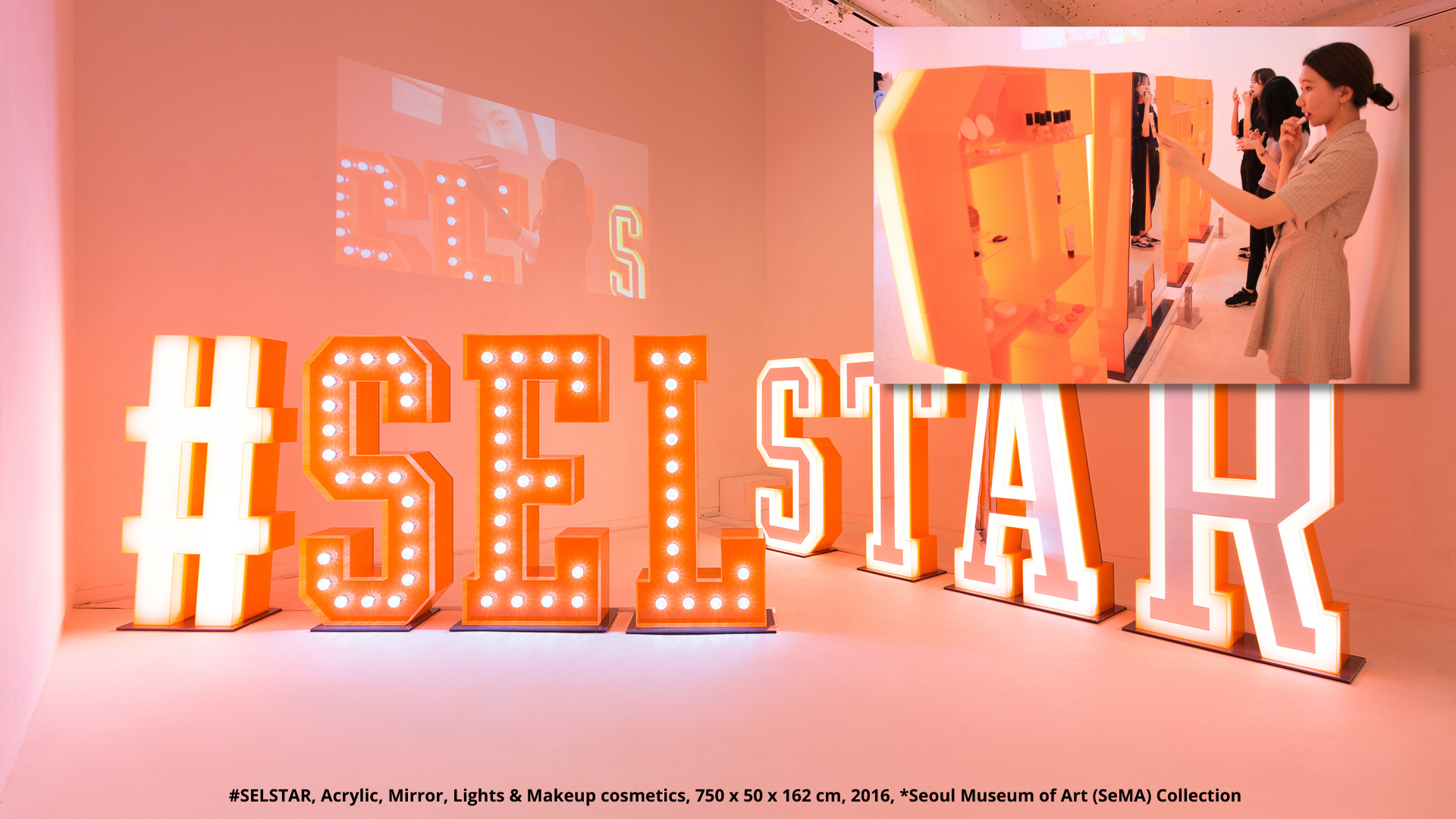 Within your practice, do you often create works that are interactive and involve participation?

Most of my works require the participation of visitors. Some particular ones are as follows:

#SELSTAR (2016), mentioned earlier, is a work that encourages visitors to put on makeup and actively take pictures in the exhibition hall. In the work Selfie-upload (2018) at the Nam June Paik Art Center, I performed as an elevator attendant, outfitted in a mod-retro uniform, and encouraged visitors to take selfies as they traveled between the museum’s floors. In the case of #FANTASY (2020), a piece that contains a selfie series, I guided the audience and the imaginary virtual boyfriend to develop a relationship with one another. 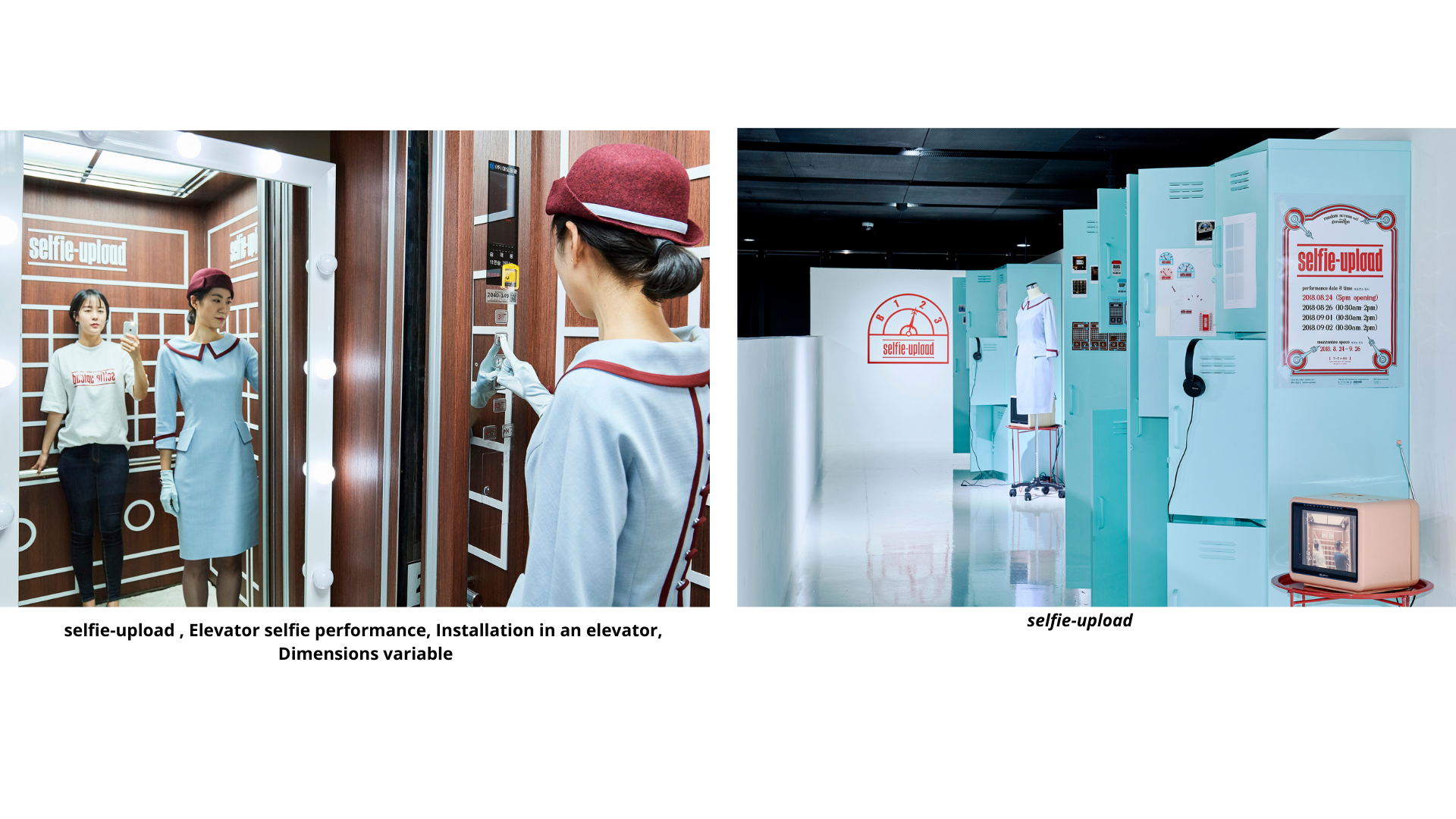 In 2014, I conducted the performance The Agenda Hair Salon. I trained as a professional hairstylist, obtaining a certificate, in order to provide a space for social and political conversations to be embodied through one-on-one interactions. In exchange for a free haircut, participants discussed social topics with me, choosing the length of their trim to scale in relation to their level of agreement or disagreement with various current events.

And another popular artwork, UNBALANCE (2019), was created in a 1980s/1990s roller-skating rink which served as a symbol of nostalgia for young adults in Korea. However, participants were only provided with one shoe that had actual roller skates. Participants could skate and listen to classic tunes, but their movements were always off-balance, reflecting the real-life uncertainties facing today’s young generations. 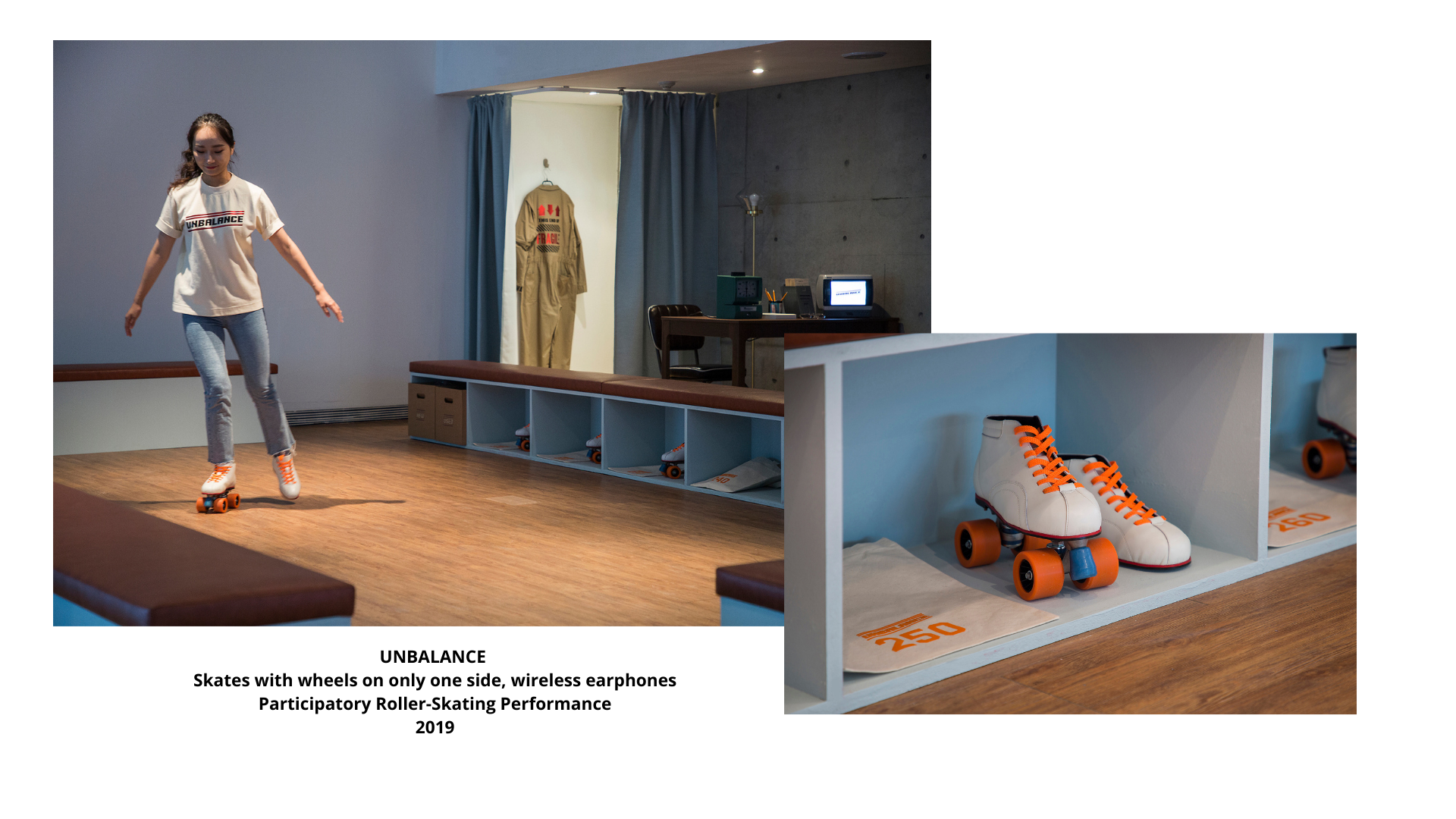 The work is strongly linked to the viewer/participant, and you have previously exhibited this work in Thailand at the Bangkok Art Biennale. How do you think audiences will interact differently with your work depending on the countries it is shown in and their relationship to art, social media, and the other themes your work touches on?

Active participation of visitors is very important in my work.

My artwork serves to free people from their profession, race, gender, age, and social position… all of these factors. This is because, through participation in art, people can look at themselves in a way that is removed from other people's eyes. An old woman in her 70s was able to run excitedly on lopsided skates with wheels - in fact, she visited the paid art museum exhibition twice with her family. Middle-aged businessmen and politicians who exude seriousness can also feel free to take selfies as much as they desire. People who wanted to speak out on social issues did so while sitting in a barber’s chair, their hair being snipped away while their new physical identities are created through the expression of their opinions.

I feel that change is made when the impossible things in life are made possible, and this can happen in an art museum! I believe this is the role of art, and it will change our perceptions of the past, present and future. I love art because it creates a flexibility in our thought process. This is why I believe in the power of art to create change.

For the final question, what is one thing you would suggest a participant keep in mind when experiencing your work?

Please remove yourself from social media and its pressures to fully enjoy the art. Allow yourself to have your own thoughts on the stage that has been created by the artist.