Banksy burst onto the art world stage in the early '00s, having earned his reputation within the street art community in the '90s. Nowadays his works are considered jewels in the crown of many art collections. One such collector is @banksy_collector, an Instagram user who - like Banksy himself - likes to remain anonymous. His page is filled with hundreds of photographs of works by Banksy (and other street artists) in public spaces, auction houses and galleries, and works in @banksy_collector’s own art collection. In the first post of his Instagram page, now followed by over 5000 people, @banksy_collector introduced himself:

“I’m a young(ish) Street / Urban Art collector in London. I post about my collection and artwork that I like. I’m not the buyer of Banksy’s devolved (monkey) parliament. Yet.”

We were thrilled to have the opportunity to ask @banksy_collector some questions about his collection, his choice to stay anonymous, and of course, his favourite street artist. 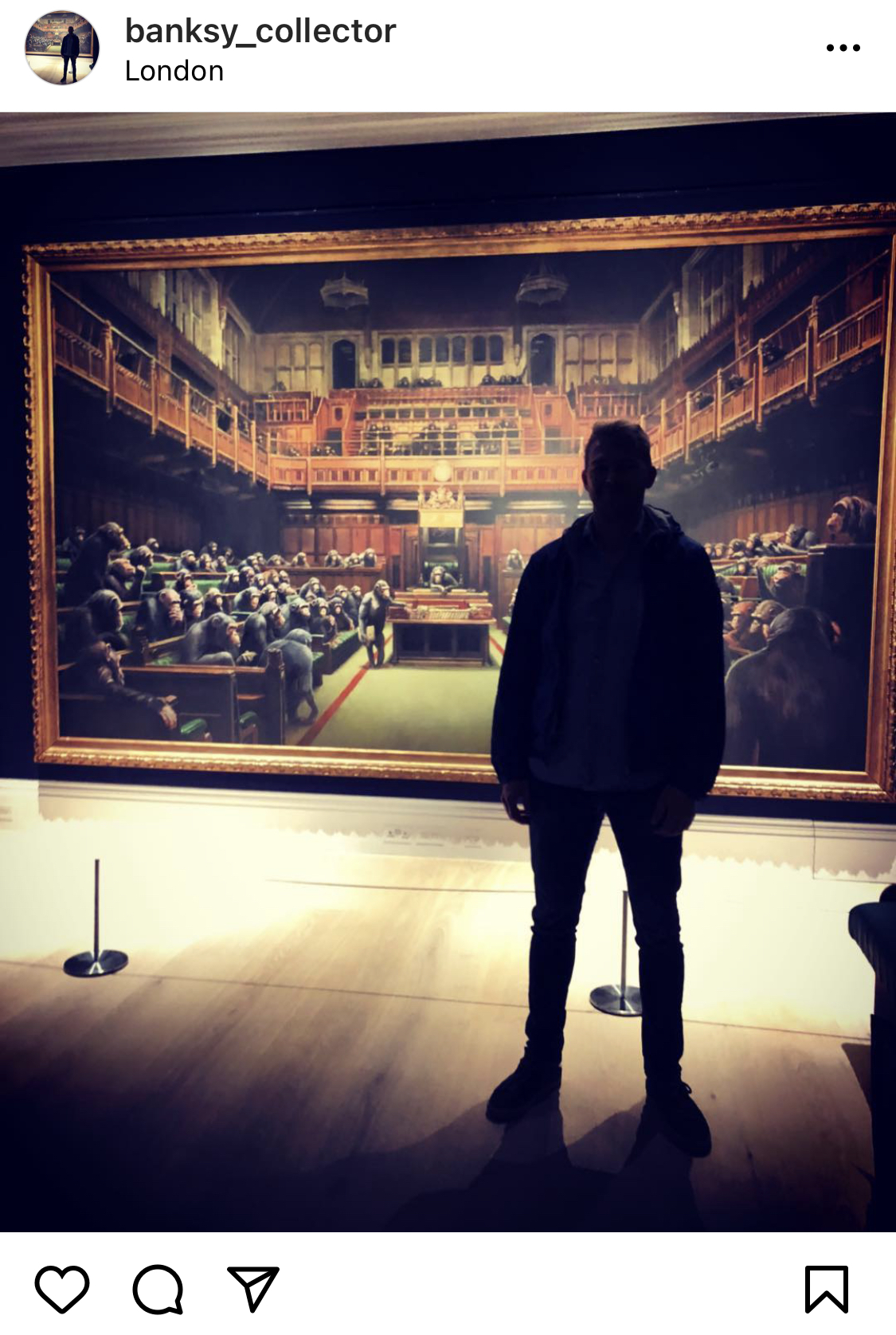 When did you start collecting? And why?

When I moved to London. The art scene in this city sucks you in and once you're in that's it! The galleries, exhibitions, museums, auction previews...not to mention the street art. It's an ever evolving mix of art to discover. A lot of my free time is spent exploring art and documenting the things that I like. Many photos end up on my Instagram which has become a bit of a home for me to share and discuss with likeminded people.

Living here I also started to understand that you don't need to be a millionaire to bring art into your home. There's something for every taste and budget. 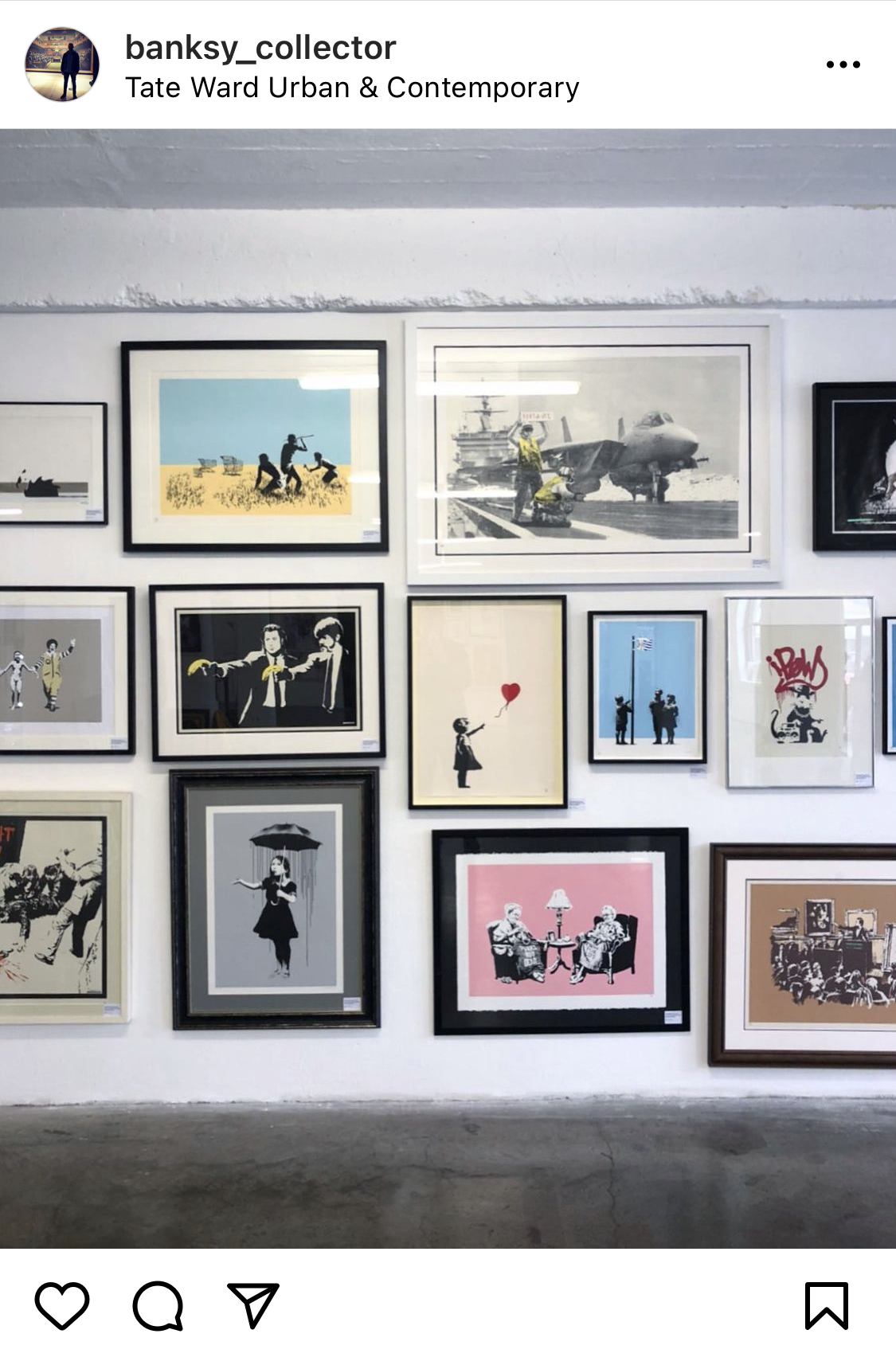 Why Banksy? What is his appeal for you?

To be honest it wasn't my first purchase of art. I'll keep what that was a secret. But it did come shortly after. I bought a 'Di-Faced Tenner' from a very trusted source. I still have it. I'd like to think I have about 95% of what I've bought. I very rarely sell anything. If I did it's been to finance another art buy.

It's a bit ironic as I was into graffiti and street art in my youth when I didn't live in England. I bought books about subway art in NYC and even tried my hand at it - I can draw but I wasn't very good at graffiti so that hobby didn't last but I enjoyed looking at street art. It also led me to hip-hop and skateboarding. It was a fun time. I often think about what could have been if I had come across Banksy back then. Would I be sitting here in a room full of originals today instead of unsigned prints? Who knows. The art world is full of what-ifs!

What else is in your collection?

I have quite an eclectically mixed and always expanding collection. Other artists in my collection with their roots in urban or street art include works by Stik, Thierry Noir, Paco Pomet...

A few years ago I started trying to acquire original works by emerging artists. There is something special about original work and owning a unique piece. I've been lucky to get some great pieces by the likes of Szabolcs Bozo, Imon Boy, Euan Roberts...

Lately I've also gotten more into the Asian artists. I bought an amazing canvas by Du Jingze (@kooqy on Instagram) a few years ago and since then have added works by Roby Dwi Antono, Ryol and Pex. There's one or two more in the works as well but I'll keep those up my sleeve until the deals are done. 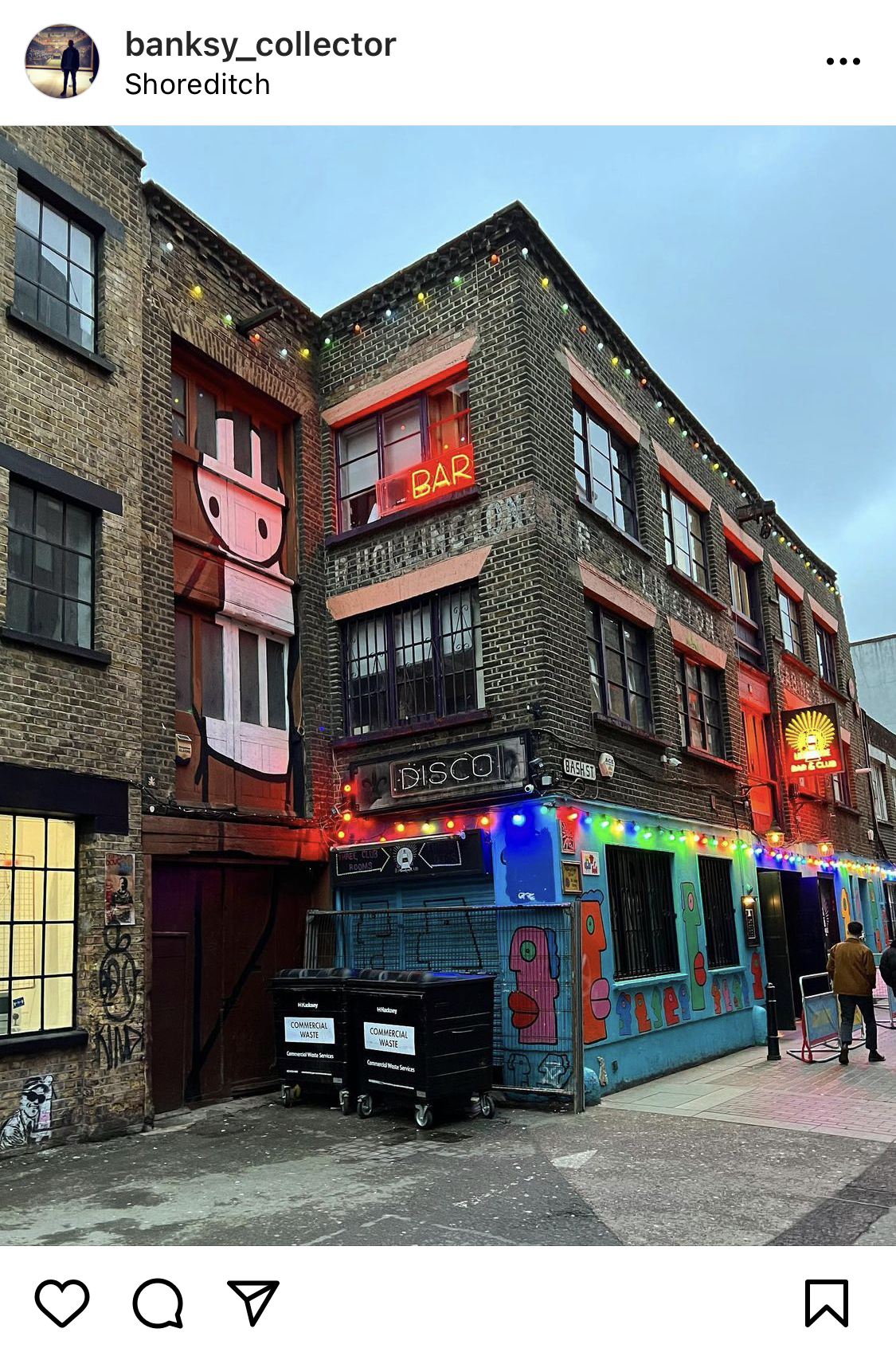 What is your favourite work by Banksy in your collection?

I'd probably have to say my first ever Banksy print which was "Golf Sale." I bought it at auction. I was there live and will never forget it. I was shaking as I bid and waited for the hammer to go down. It wasn't so much money now but it was for me at the time. A little tip - auctioneers like selling to someone in the room, so if you can, go in person. Decide on your max bid in advance. Make eye contact with the auctioneer and bid up to your limit (and pray you get it for less!).

I love my "Flying Copper" too. It's BIG. The colours are great and it's got as much relevance today as when it was made in 2004. It's an underrated print in my (slightly biased) opinion.

I love so many of the images so when I started buying Banksy I first bought unsigned prints so I could have as many images as possible. In terms of the value trajectory (compared to signed prints) it may not have been the best move long term but it doesn't matter. I'm lucky to have some beautiful prints on the walls. 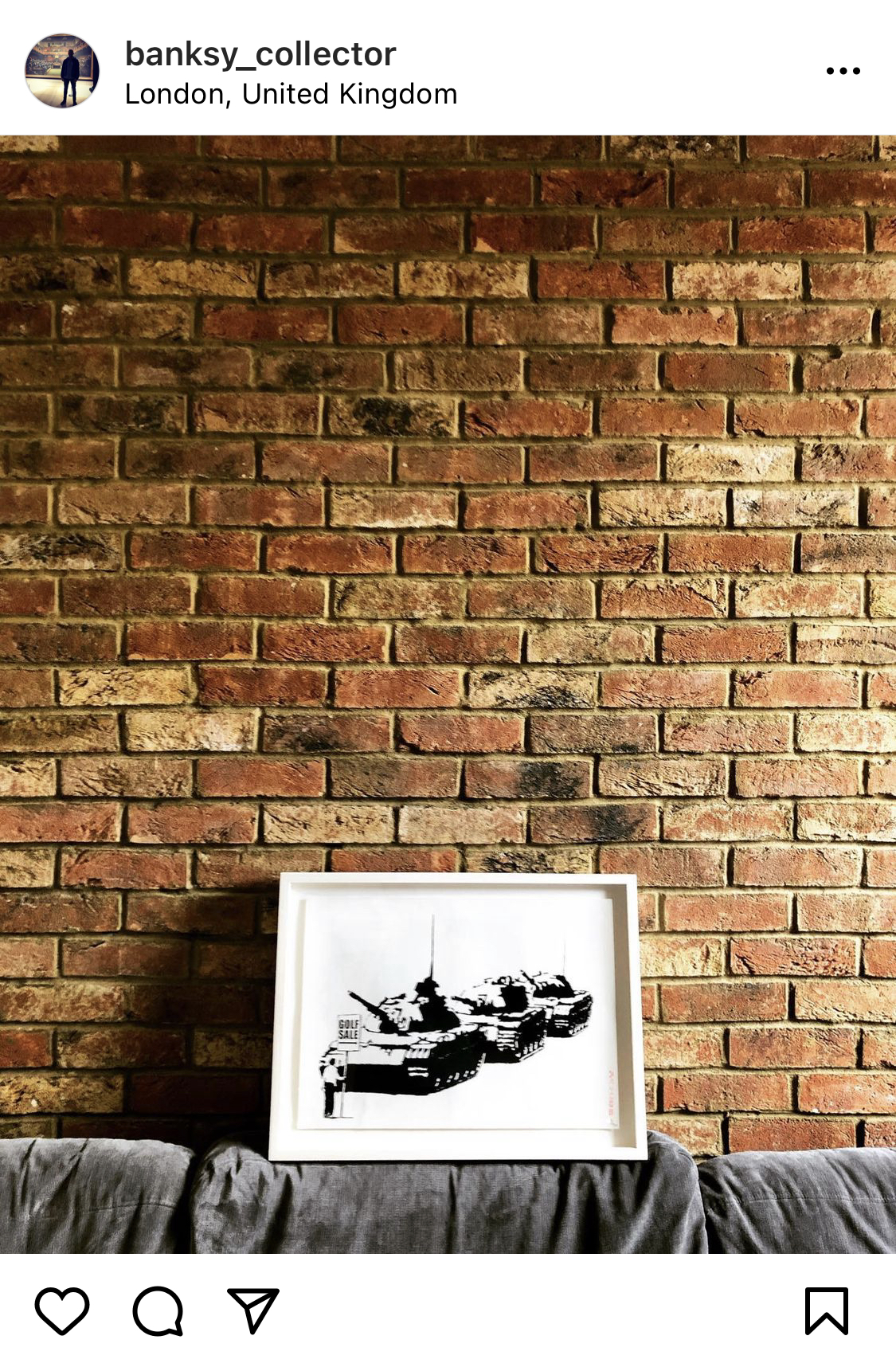 How has the market for Banksy's work changed during your time as a collector?

A lot. When I started the chase of buying a print was part of the thrill. The community was smaller. I made some great friends in the art world negotiating deals and meeting up in various parts of London to buy 'Tenners' ["Di-Faced Tenner" series], 'Walled Off Sections' ["Walled Off Hotel" series] and eventually prints.

During the Covid years a lot of money went into the Banksy market , similar to how many asset prices skyrocketed. You'd buy a print and a week or two later it was worth £5k more. It was madness honestly. Auction houses were having a field day with it.

The market has corrected itself since then but print prices are still a lot higher than pre-Covid. It's a different market now for most collectors. I'm not complaining but I do miss those old days of hunting prints. 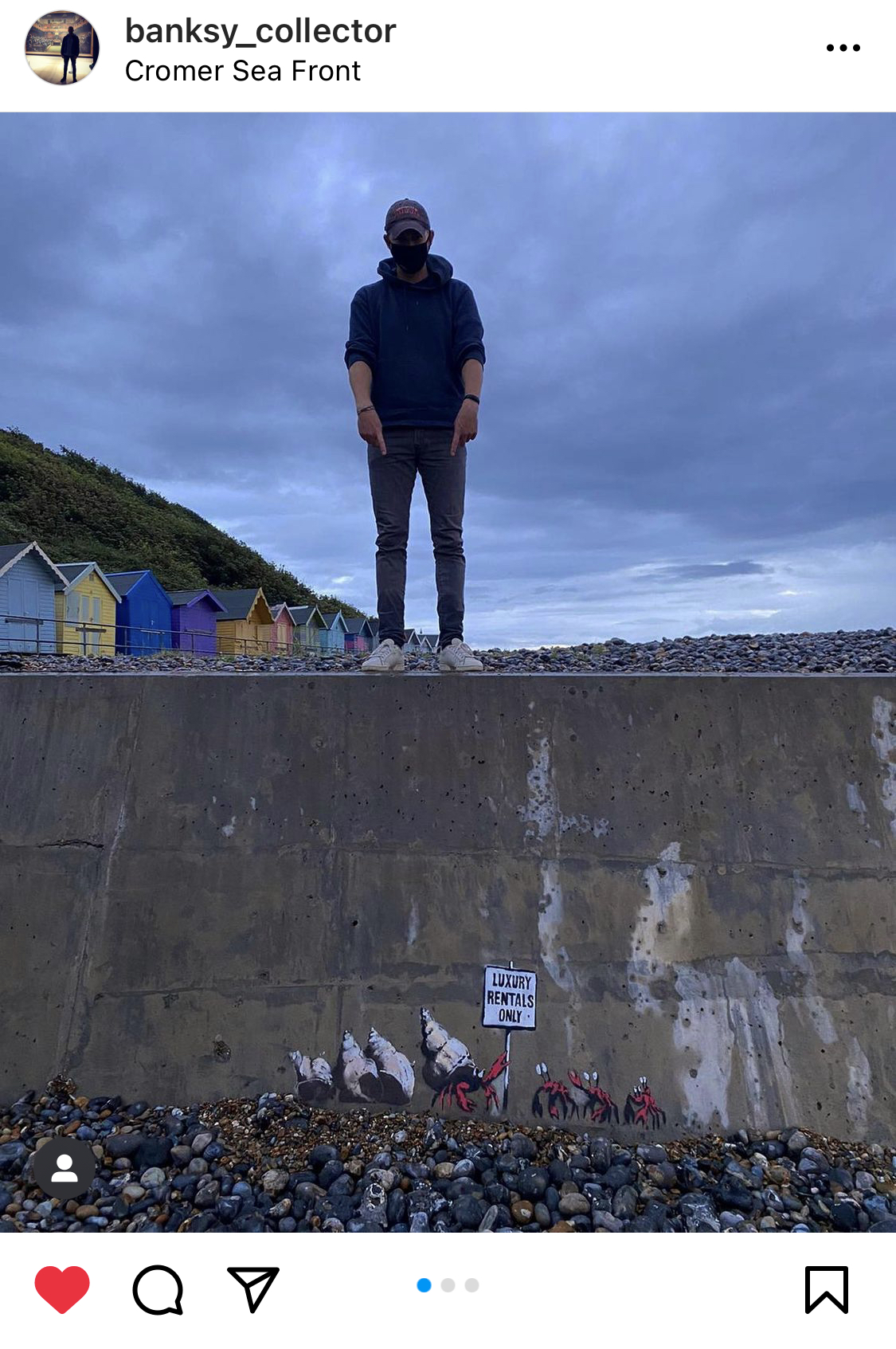 What do you foresee coming up next for Banksy?

Everyone is always waiting for what's coming next. Something is brewing I think. Over the past years we've had 'GDP' ["Gross Domestic Product" body of work] and various new street pieces. It's been about a year since the 'Great British Spraycation' when I made my way around the British seaside up in Norfolk to hunt down all the new street works.

My girlfriend is a saint. She's always there with me on these excursions! We don't own a car so we did the whole thing by public transport including renting those crazy e-scooters to get around Great Yarmouth.

We were about to head home from Lowestoft when another piece was discovered in Cromer so we made the decision to go find it somewhere along the beach. We did just as the sun started to set. I think we may have been among the first group of people to find and photograph it. We missed the last train back to London that night (PS they don't run late from Cromer!) but it was worth it.

I've discovered parts of the UK, Paris, New York... that I would have never seen if it wasn't for Banksy. 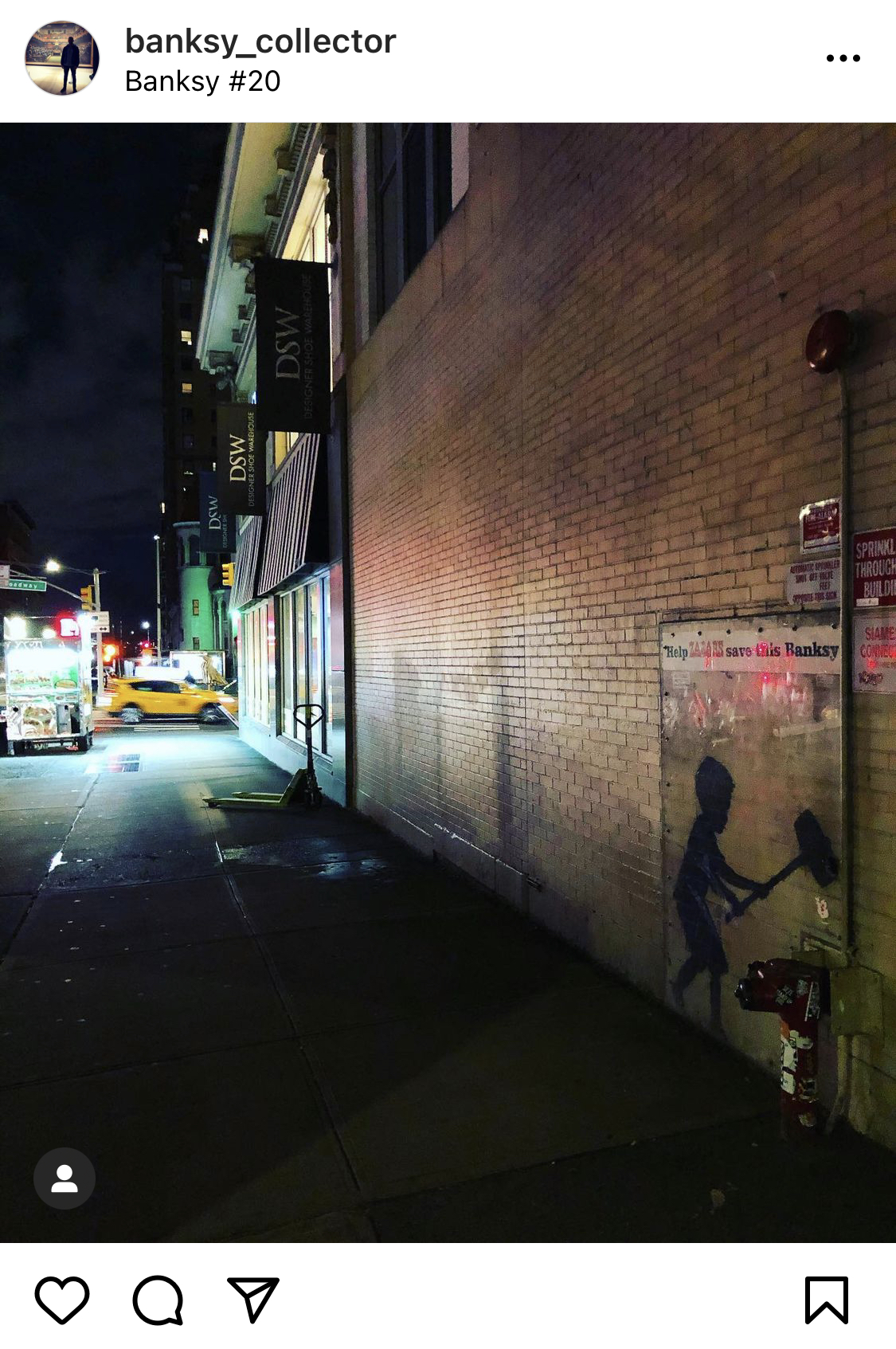 How regularly do you have people asking if you're Banksy?

Only once on Instagram. People ask some weird questions on there.

Have you ever met Banksy?

Not that I know of.

Why do you actively share your collection and art experiences on social media, especially as someone who prefers to stay anonymous?

Good question. I think it's fun to document. I wanted to have an account dedicated to documenting my art journey. Not sure my non-art world friends would have enjoyed seeing videos of me opening packages or going to random exhibitions all the time.

Having the account has been a door opener to meeting like-minded people, finding art, discovering new artists...

Andy Murray followed me the other day. That was pretty cool. He hasn't liked any content yet though so I need to keep working on that. 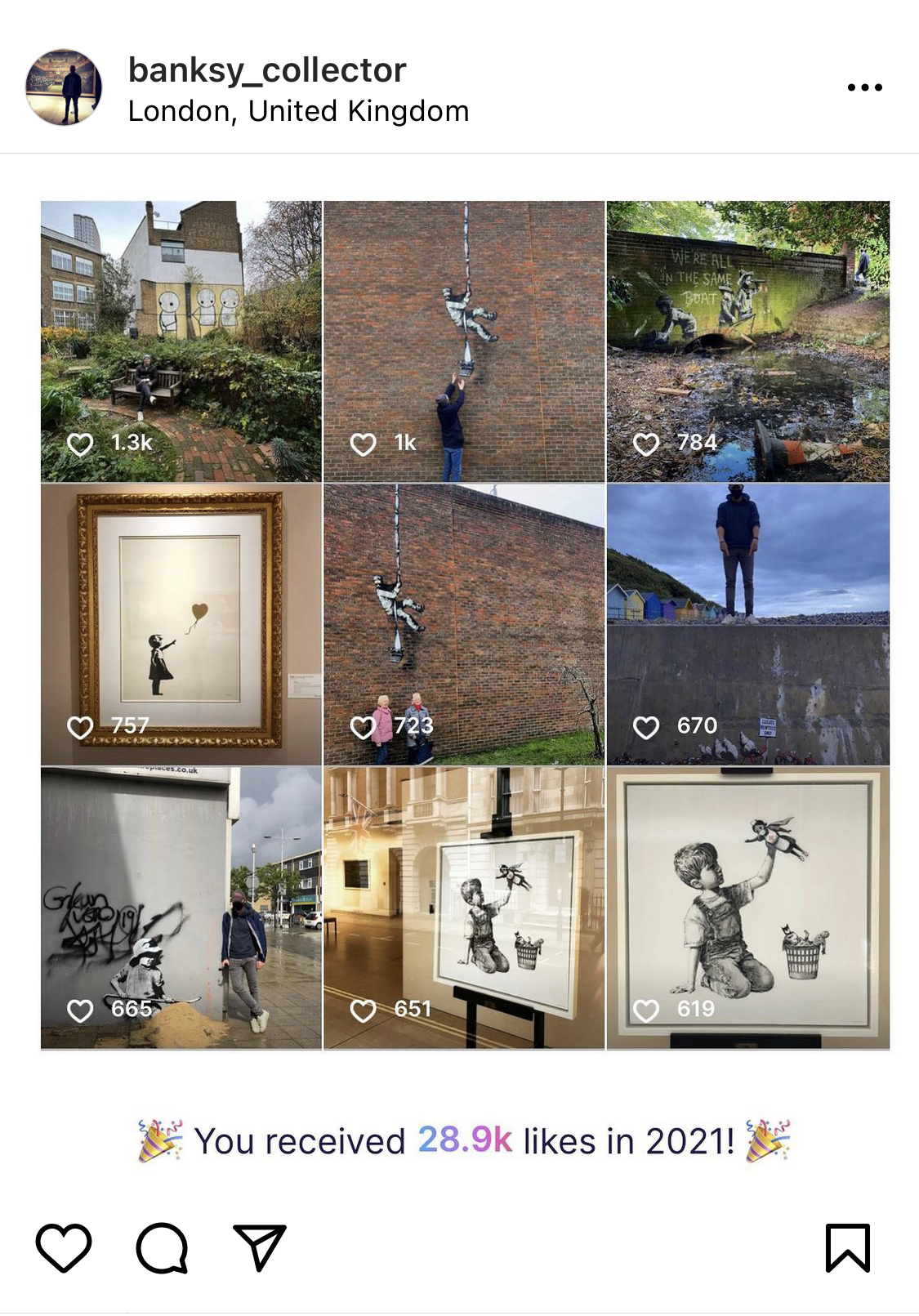 What advice would you give to budding collectors, and specifically budding Street Art collectors?

Come to London! No, but seriously you can find art everywhere. Start small. Ask questions. There's a lot of collectors happy to help. Do your research! There is a lot of fake works out there. Don't be fooled. If it sounds too good to be true it probably is. Someone offered you a 'Banksy spray paint original on cardboard' for £500? Real originals go for 6-7 digits at auction so my advice would be to buy a "Welcome Mat" instead. It's an authentic Banksy item and if you buy it from source (lovewelcome.org) the money goes to a great cause - helping refugees.

That's it really. Enjoy the journey. I know I am.

We love great art, but we also love the people behind it. This is why, we have launched our new Summer Series: a series of interviews that aim to uncover diverse collector profiles, and give an insight into the different reasons on 'Why Collect Art? If you have enjoyed this interview, and you would like to share your own collecting experience with the Artscapy community please get in touch with us at marketing@artscapy.com.