Damien Hirst sprang to fame as part of the Young British Artists (YBAs) group in the late 1980s. Alongside artists like Tracey Emin, Liam Gillick, Rachel Whiteread, and Gavin Turk, the young Hirst came to the artworld stage with work which shocked and went against the traditional establishment. Hirst was born in 1965 and grew up in Leeds, later moving to London to study. While studying at Goldsmiths College, the artist organised Freeze, the exhibition which put the YBAs on the map and cementing a career-defining relationship between Hirst and the collector Charles Saatchi. 7 years later in 1995, Hirst won the Turner Prize.

Hirst’s works take pride-of-place in collectors worldwide and he is one of the highest ranking living artists selling at auction, with his biggest sale reaching 8-figures. With the artist currently creating new bodies of work, it’s the perfect time to bring a Hirst work into your collection. So, what periods and styles of the British artist’s work are the most coveted and which will best serve your collection’s lasting value?

Since graduating, Damien Hirst has produced over 1000 of his famous spot paintings which have become an immediately recognisable symbol of the artist. Each spot is uniformly sized, hand-painted, and of a unique colour. If you are looking to bring a Hirst into your collection that is immediately recognisable as the work of the YBAs genius, a Spot Painting is a wise decision.

Hirst has long been a believer in releasing limited edition prints of his works in order to make buying his work more accessible. One of his first releases was of a selection of his spot paintings, released in editions of 300-500. The artist has since announced he won’t release any further spot prints. These prints now reach five-figures on the secondary market and are a particular favourite of collectors. One of these prints - Cocarboxylase - is available today on Artscapy Marketplace via Artificial Gallery. The print was made in 2010 and is from an edition of 48, costing £28,500. 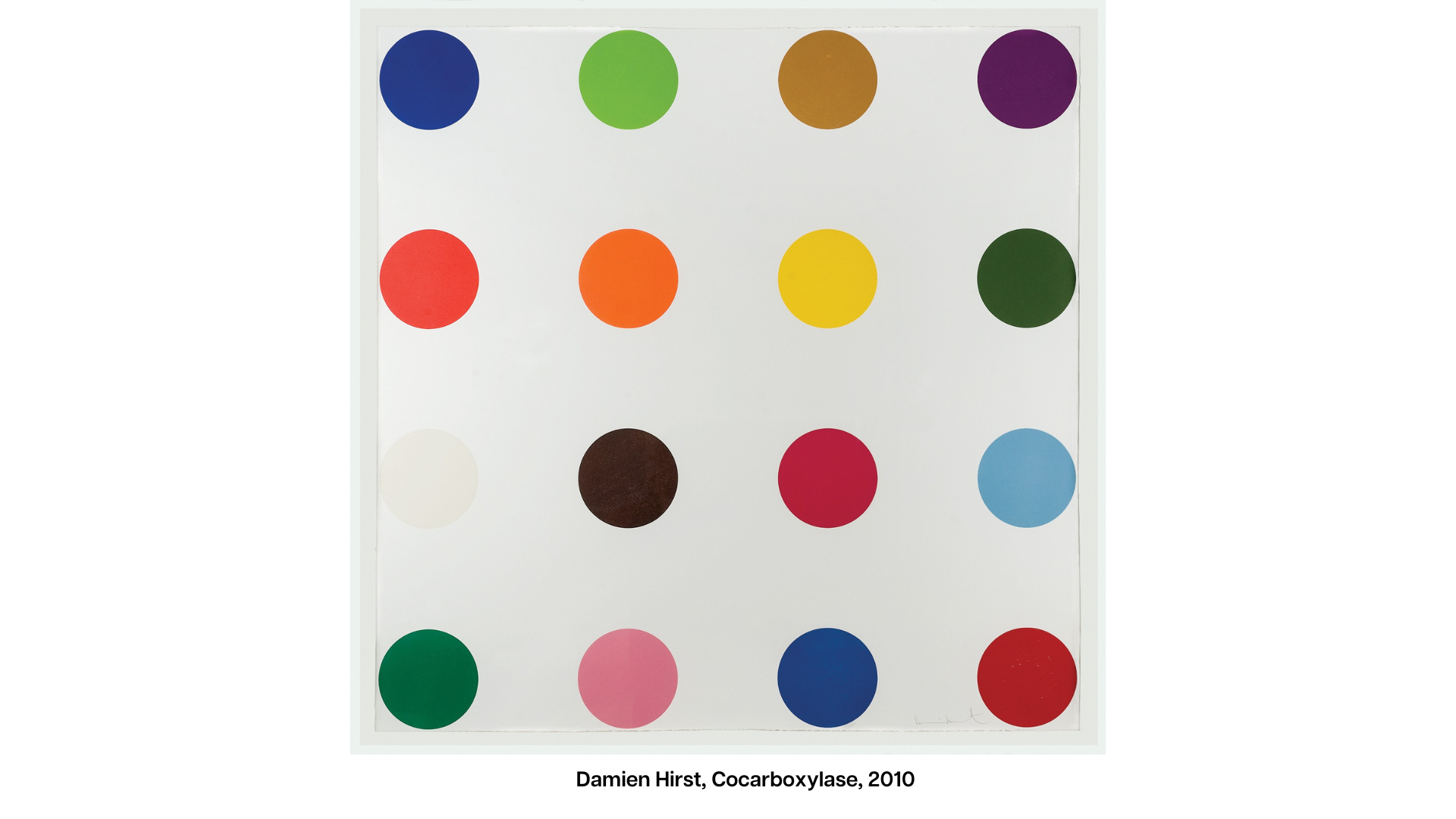 Damien Hirst’s 2021 series Cherry Blossoms marked a new direction for the artist, which surprised many fans. The large-format canvases show cherry blossom trees, marked with bright pink petals reminiscent of the vibrant spots of the artist’s earlier paintings. Very few of these new works have found their way to the secondary market so far. 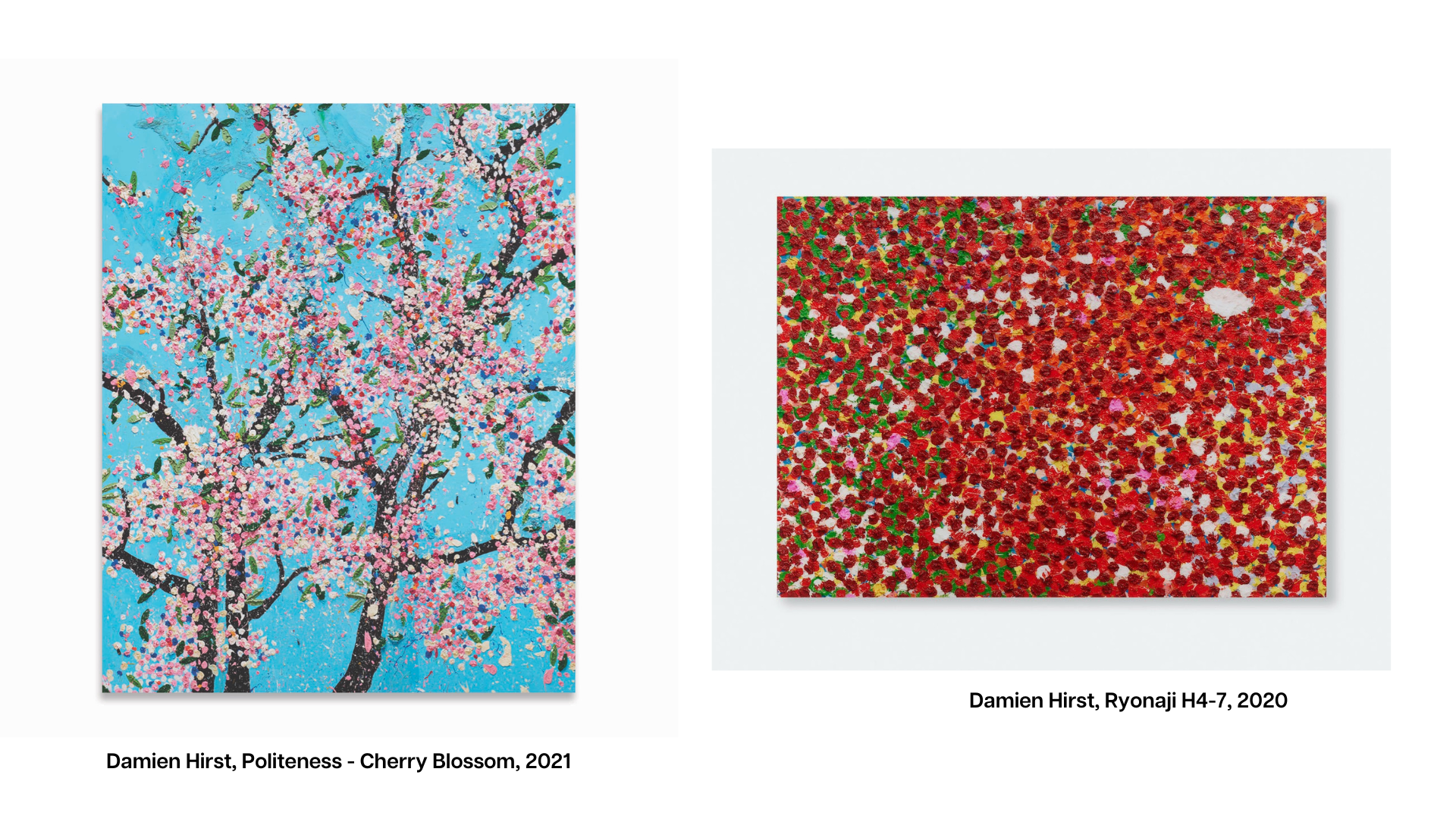 Hirst’s Spin Paintings, made from the early noughties, are created by the artist spilling household gloss paint onto a canvas being spun around by a mechanical arm. Hirst has completed spin paintings on heart-, butterfly-, and skull-shaped canvases as well as on traditional circular canvases.

Some of Hirst’s more controversial works, the artist’s butterfly-wing paintings are large-scale collages made of butterfly-wings, arranged as if one were looking into a kaleidoscope. Hirst’s 6th best price achieved at auction was for his butterfly-wing painting Eternity, which achieved £4.7 million in 2017.  Hirst’s butterfly-wing collages are equally popular:  his prints are finished by hand or with diamond dust. The prints vary in size from under 1m x 1m to his large 2005 wallpaper panels New Religion which were 2m x 2m. We should note that during the 2020 lockdowns, Hirst produced a 4150 edition-run of butterfly prints to raise money for NHS workers.

Hirst's fascination with skulls began at a young age when the artist used to visit anatomy department of Leeds Medical School to draw the cadavers. Our relation with Death was always fascinating to Hirst due to its ever-changing nature. For the Love of God is the epitome of memento mori, and one of the most controversial of Hirst's works. Why? The artwork is made from a platinum cast of an 18th-century human skull that was then encrusted with 8,601 diamonds.
On Artscapy the print version of the diamond skull, Victory over Death, is available for puchase via Artificial Gallery for £19,500. It is identical to the previous skulls etchings, but highlights were added through hand-colouring to create the effect of optical reflections on the diamonds. Victory over Death is the only etched – and the largest – version of the diamond skull. 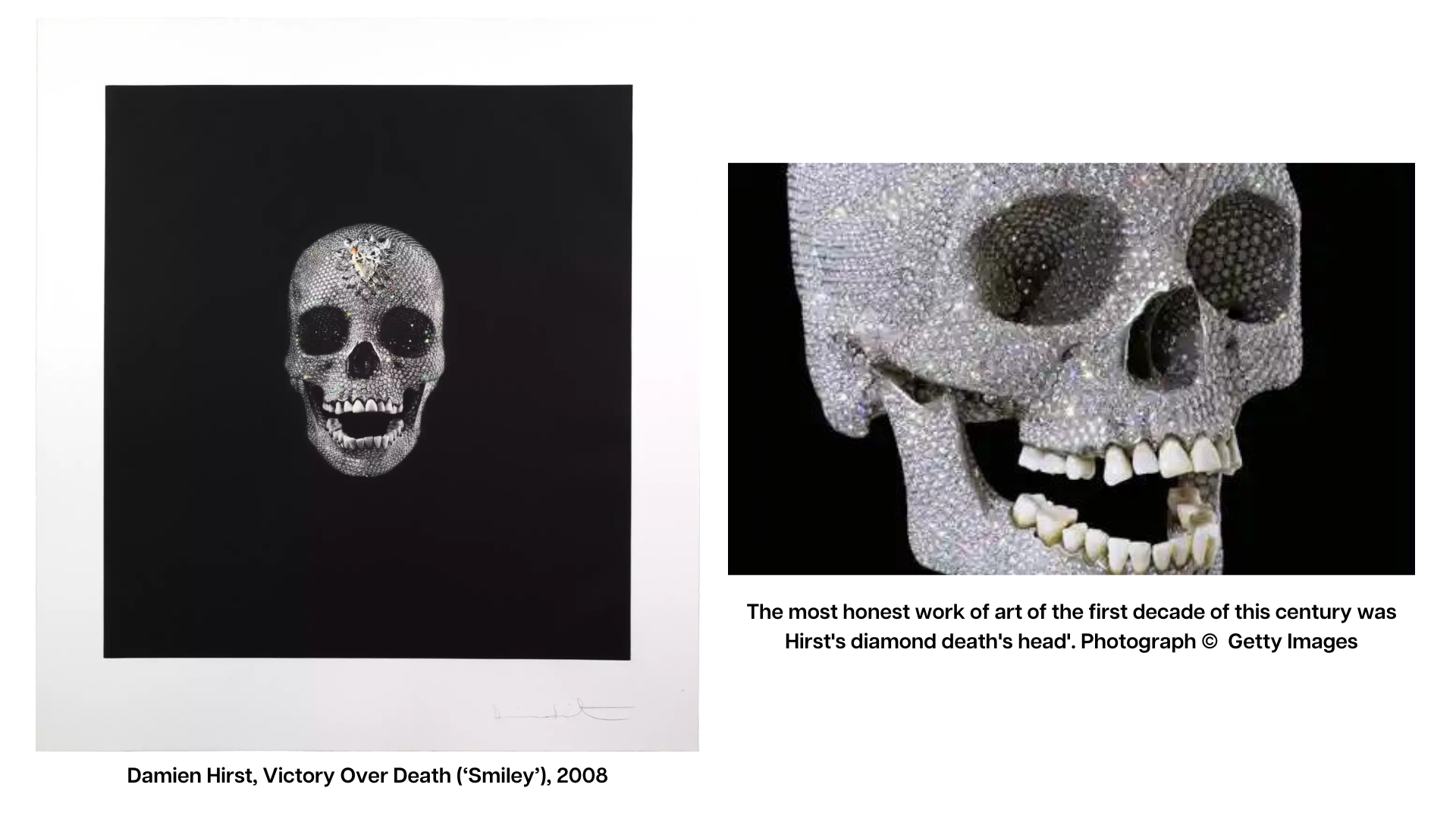 Several of Hirst’s top 10 highest reaching sales at auction have been for his medicine cabinet sculptures. These pieces are made up of (oftentimes hundreds of) pharmaceutical pills in rows of metal shelving. The recreation of medical display cabinets has long been a theme in the artist’s work. Dettol, a 2014 sculpture by Hirst is available on Artscapy Marketplace for £14,500 via Artificial Gallery. An early example of Hirst’s collages - too - is available on the site. Colony Drawing (with numbers) is a collage of printed images of pills with accompanying pencil additions, dating from 2008 and priced at £17,500 via Artificial Gallery. 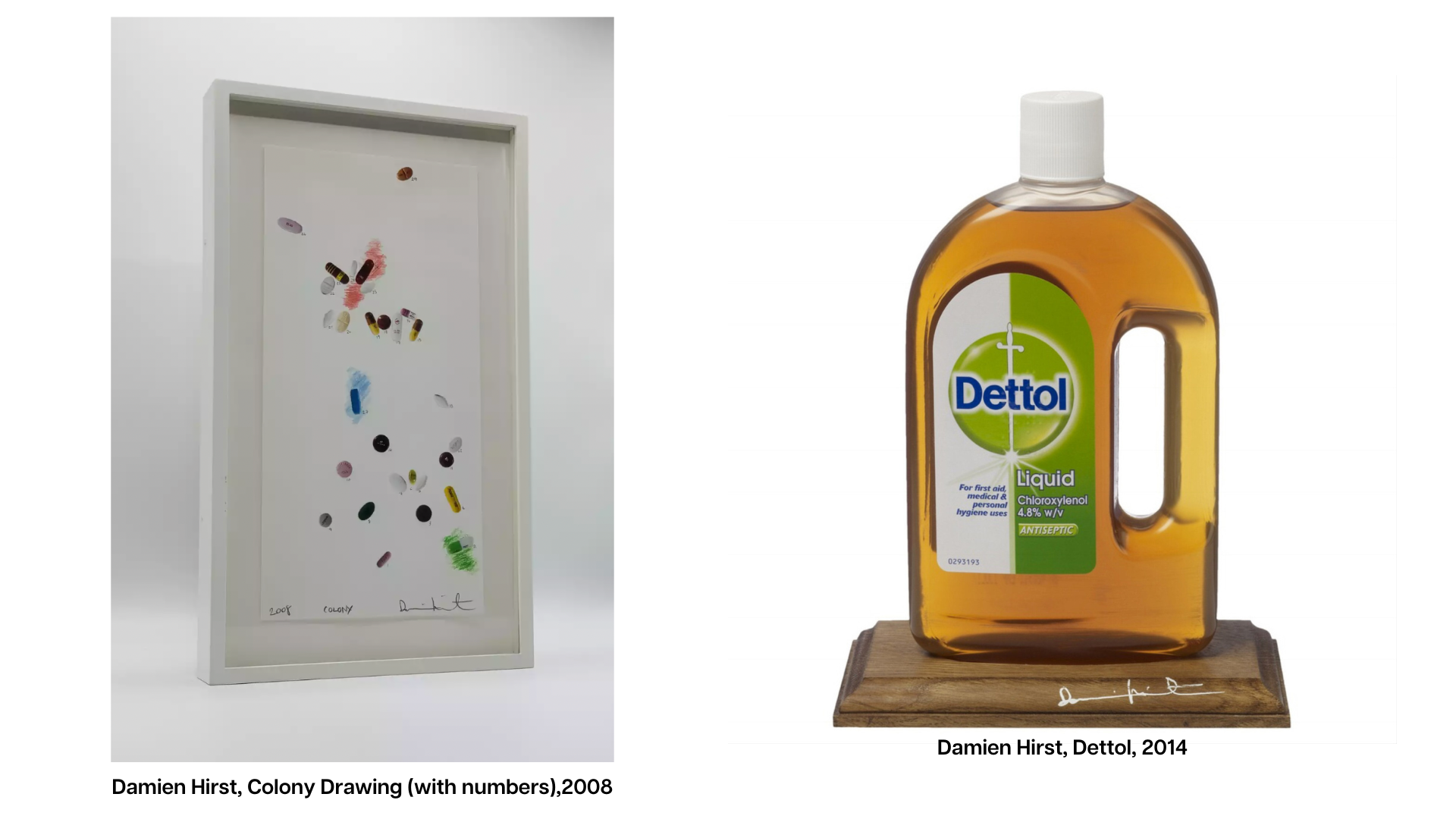 In 2021, Hirst announced his first NFT project - The Currency. Collectors received an original spot painting and an accompanying NFT. Following a short period of time, the collector had to choose whether they wanted to keep the NFT or the original painting, and the other version would be destroyed. 5149 collectors chose to keep the physical copy and 4851 elected to keep the NFT. The Currency NFTs fetch around $6,900 online. On Artscapy Marketplace one of The Currency paintings (20 x 30cm) is available for purchase for £20,000.

Artscapy marketplace is the ideal place to begin or expand your Damien Hirst collection, and our team are available to answer any questions you may have. 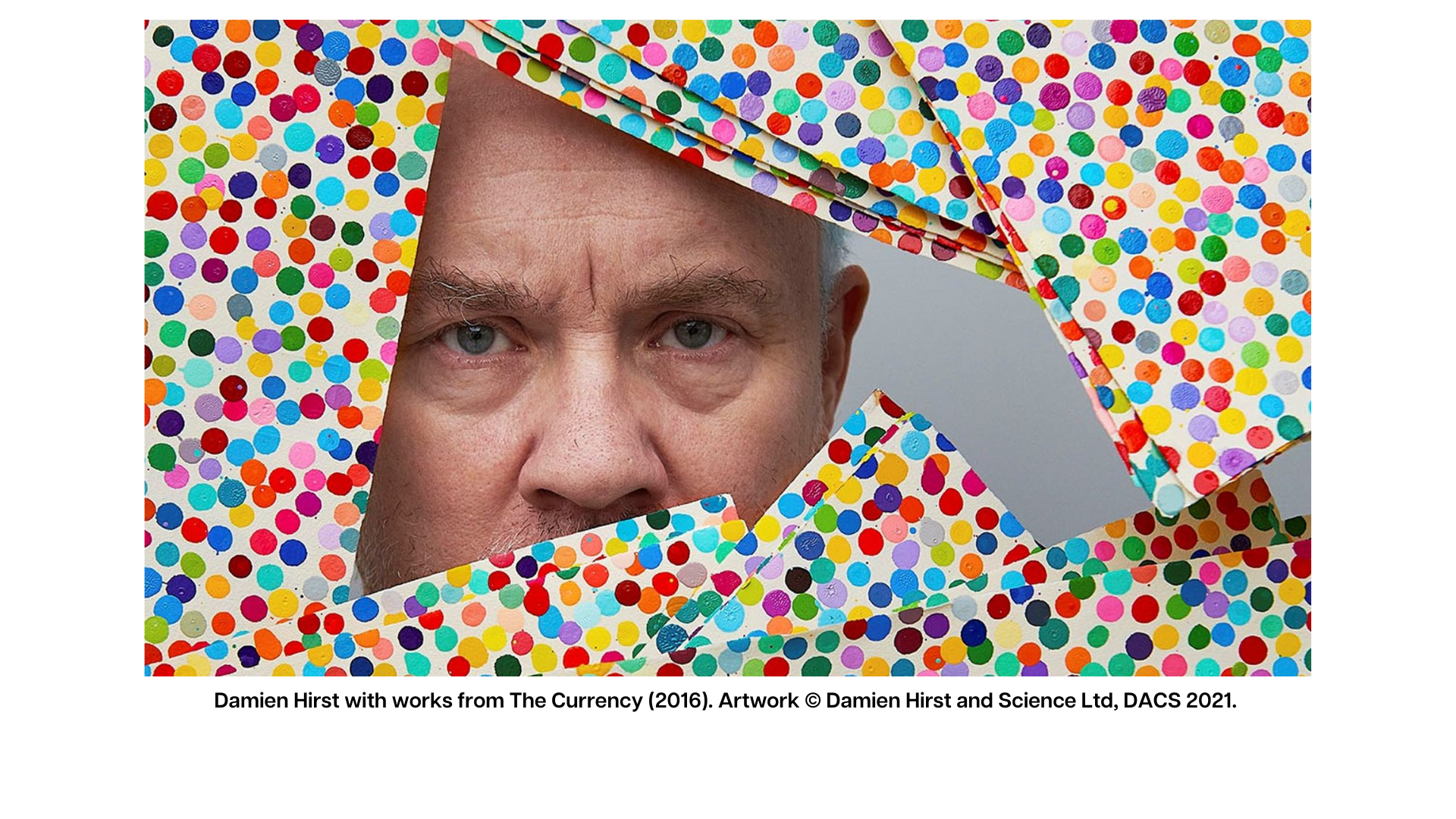