For the first time in Art history, Art Basel held its latest edition in Paris, and obviously, we couldn’t miss such a special occasion to visit the city of love! With the participation of more than 150 galleries worldwide, Paris+ par Art Basel debuted with artworks ranging from modern to contemporary art by established and emerging artists.

We selected for you the five artists that have stolen our hearts:

Represented by the Parisian gallery Art Concept, French artist Caroline Achaintre is nourished by radically different cultural references, which influence her approach. With her sculptures made of wool, ceramic, and watercolors, the artist appropriates each space to install her hybrid creatures, transforming the exhibition space into a theatre where a dialogue between different characters, half-fantastic and half-ghostly, takes place. Her works have the particular feature of being difficult to define. At once abstract and figurative, they reveal anthropomorphic forms and indicate a specific interest in animism. The mutation of forms and the plurality of possible interpretations engage the mind and the whim of the viewer. The strength of Caroline Achaintre’s work is her ability to question our capacity to be in the world as individuals, defined by complex and multiple identities. 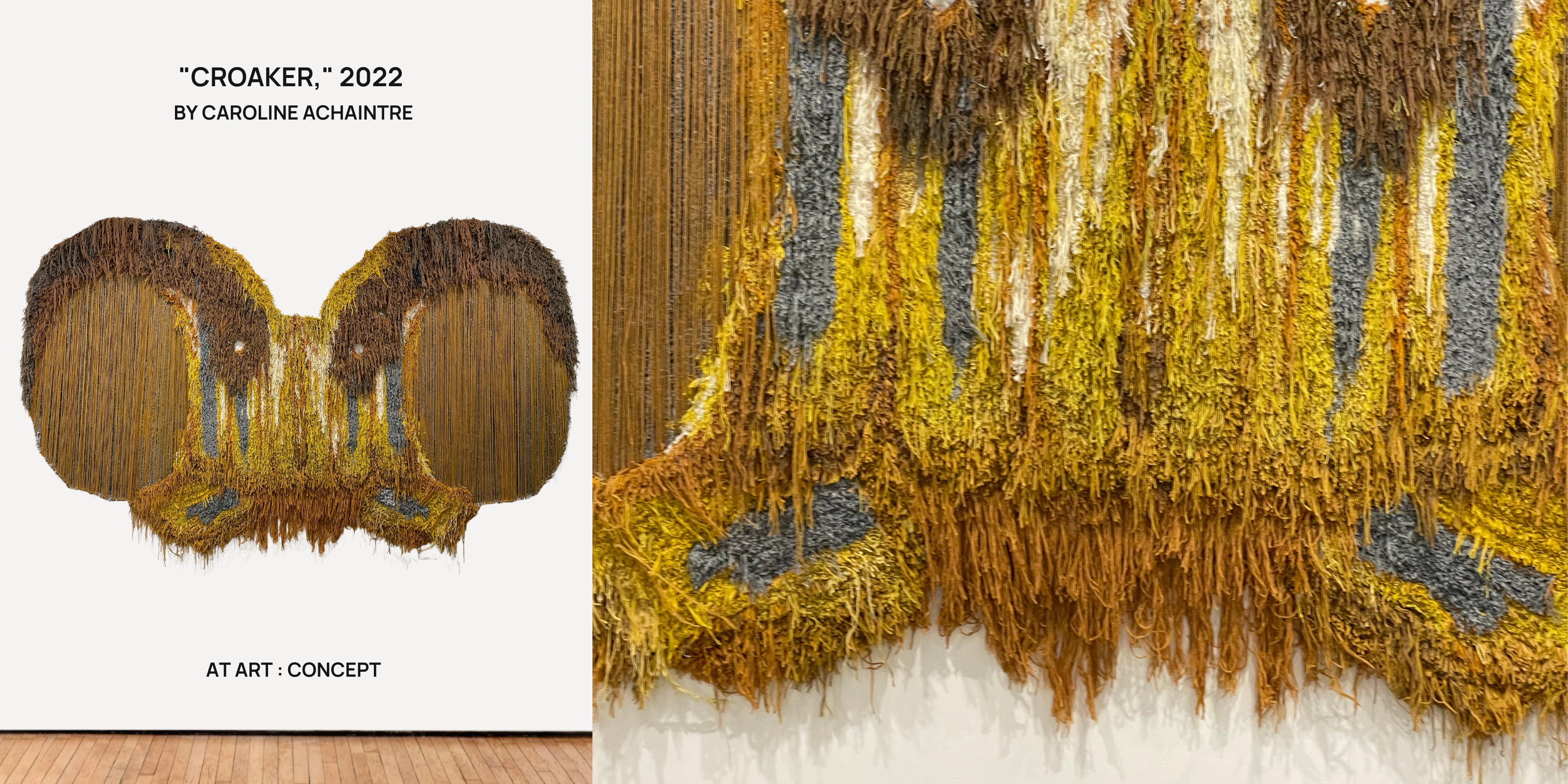 Represented by Almine Rech, the Madrid-born artist Jorge Galindo is known for his large-scale expressionist paintings in oil. Galindo’s gestural marks— splatters, sprays and swaths of bright colors— attest to his unrivaled skill as a draftsman of the painted stroke, as well as a colorist and a master of composition. The flower as subject matter first appeared in Galindo’s work in 2009, inspired by a floral still-life by Henri Fantin-Latour, reproduced as the cover art of the English rock band New Order’s 1983 album Power, Corruption & Lies. His visceral marks in paint animate the traditional still life motif, pushing the realism of a 17th-century Dutch flower painting into the realm of abstraction. Galindo returned to the subject of flowers in 2019 in collaboration with the Spanish film director Pedro Almodóvar. Combining elements of painting, photography, and collage, he enlarged a series of Almodóvar’s still life photographs as the ground for new paintings, which the duo realized together— applying paint with brushes and their hands and feet. This ongoing exploration continues in his recent series. 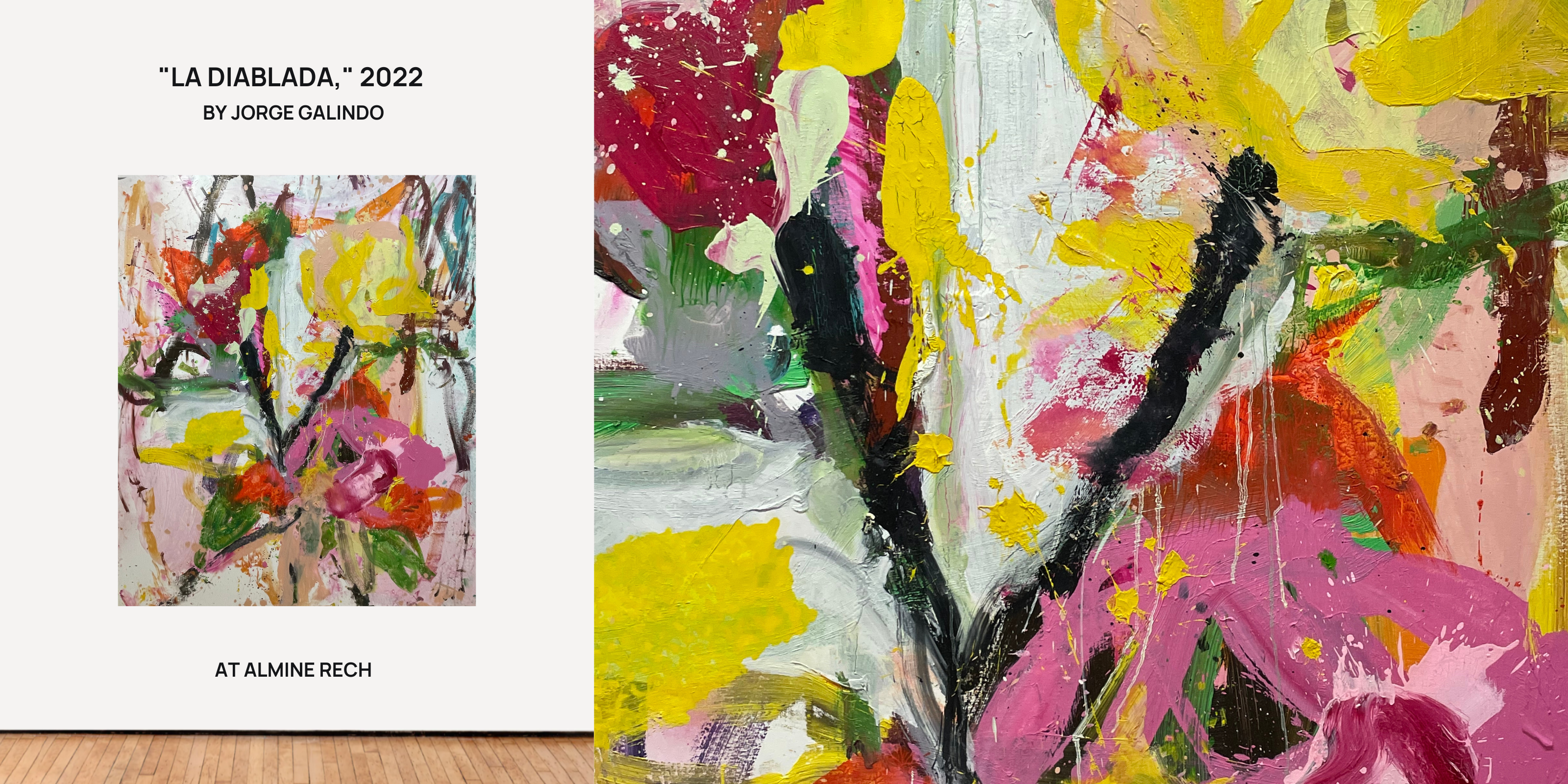 Represented by Semiose Galerie, the Zimbabwean artist Moffat Takadiwa creates large format sculptures from materials found in garbage dumps, notably computer parts, plastic bottle caps, toothbrushes, and toothpaste tubes. After gathering significant quantities of these small objects and sorting them by color and shape, the artist weaves these discarded scraps into rich wall hangings. Once suspended, these post-industrial fabrics through their intricate beauty acquire an aura of ritual or totemic artifacts. Takadiwa lives in Harare in Mbare, one of the largest recycling centers in the country and an important hub for the informal economy. Since the earliest days of his artistic career he has used his practice as a platform for the rehabilitation of his community, working with young local artists and designers to establish the world's first artistic centre based on reclaimed materials. His works reflect his belonging to the post-independence generation by dealing with themes such as consumerism, inequality, post-colonialism, and the environment. 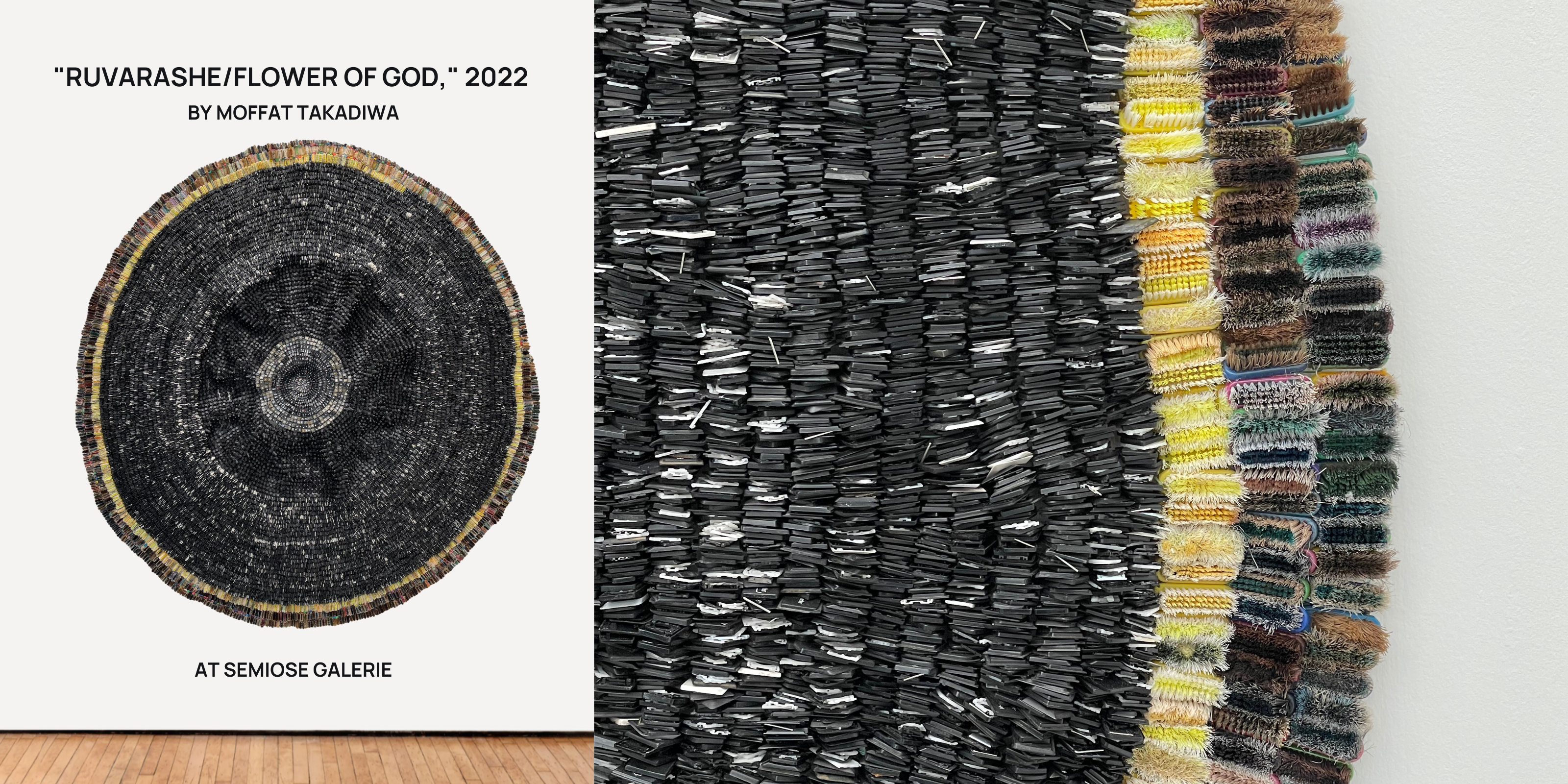 Represented by Galleria Massimo Minini, the American artist Sheila Hicks has established herself as one of the most distinctive artists of her generation. Working to maneuver color, texture and form, the artist has produced rich and complex large-scale sculptures and installations that indulge in material tactility and the collective experience of space. She became fascinated with textiles and weaving while working with George Kubler, an art historian specializing in pre-Columbian art from South America, who encouraged her to travel abroad to expand her understanding of the medium. From 1959 until 1964 Hicks lived and worked in Taxco el Viejo, Mexico, honing her skills as a fiber artist and learning from traditional textile craftspeople. Hicks continues employing intensely saturated color and the raw materials of textiles—wool, synthetic thread, linen flax—in works rigorously constructed by wrapping, piling, and weaving her fabrics. "I don't want to go do something I know how to do. I want to go do something I don't know how to do," she said. "I don't want a legacy. I just want to have fun while I'm here." 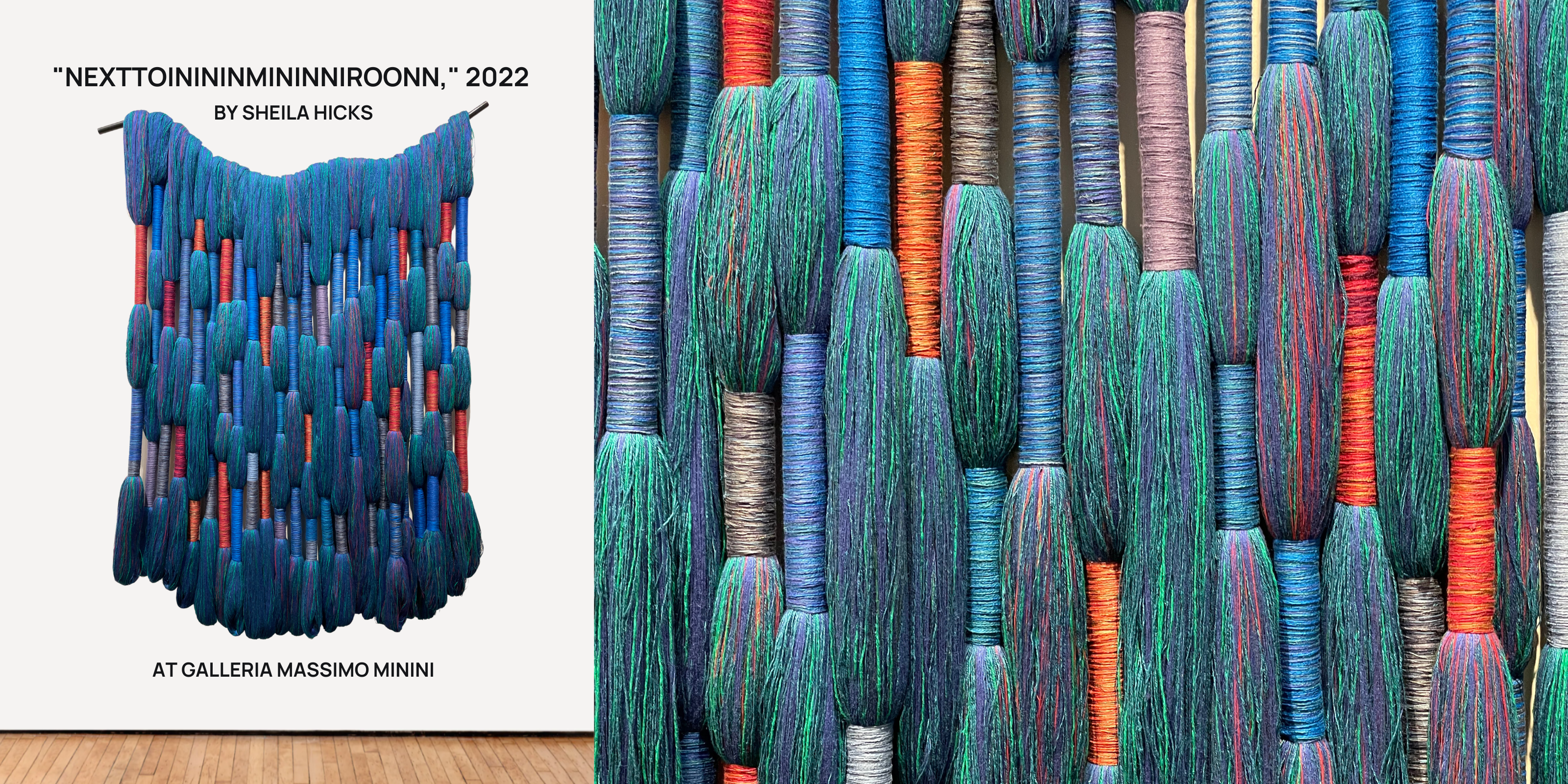 Exhibited by Neugerriemschneider, the Icelandic-Danish artist Olafur Eliasson is internationally recognized for employing elemental materials such as light, water and air temperature to enhance the viewer's experience of the ordinary. His artistic practice includes a wide range of media, including installation, painting, sculpture, photography and film. He began receiving international attention in the early 1990s with groundbreaking sculptures and installations that employed illusory tools and intentionally simple mechanics. Established in 1995, his Berlin studio numbers about eighty artisans, specialized technicians, architects, archivists, administrators and cooks. They work with Eliasson to experiment, develop and produce artworks and exhibitions and to archive and communicate his work digitally and in print. At Studio Olafur Eliasson ways of touching the world are tested, not only through artworks and projects but also through the continued development of publications and unique content for digital platforms and social media. 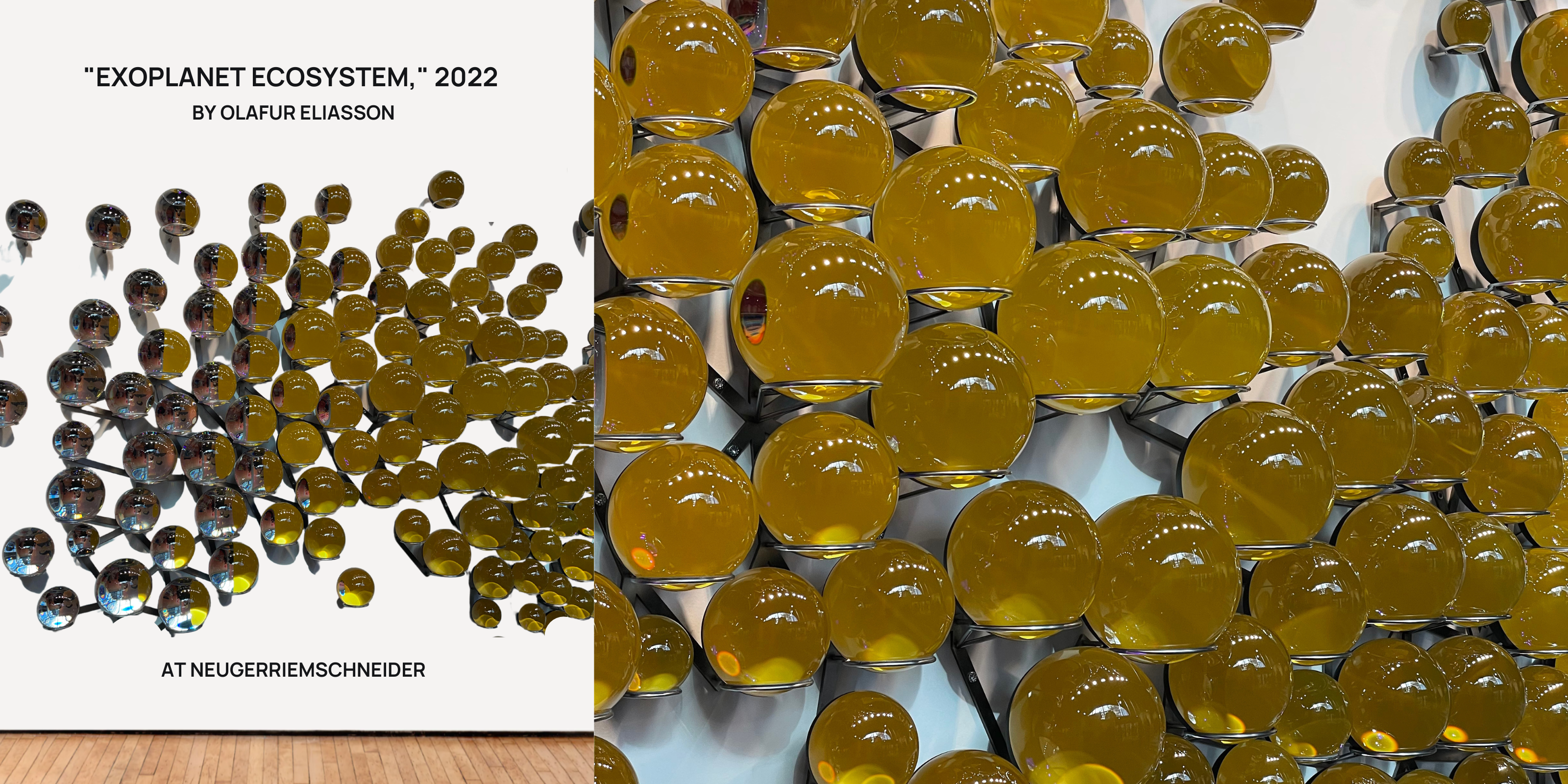 Have you visited Paris+ par Art Basel? Don’t forget to share your favorite artists with us!