It was a balmy Monday afternoon when I hopped on the Elizabeth line for the first time because I was headed out to south east London to visit an artist’s studio. The scene is different from the London many years ago, when artists had studios in Shoreditch and Soho. Now, Bow or Hackney Wick are the closest many younger or emerging artists can get to those areas. I was headed out to a block of artist studios in-between Greenwich and Woolwich, which was a journey, but a fun one because I explored a new area of London I had never been to before. I walked along the Thames and enjoyed a great view of Canary Wharf, situating myself within a new area of the huge city I call my home.

Arriving at Thames Side Studios, the artist I was visiting, Anne von Freyburg, met me at the gate. We walked to the entrance of the block of studios and navigated our way through the halls filled with artists creating their work behind their studio doors. Coming up to Anne’s, she offered me a cup of tea which I gladly accepted and we entered the small space with high ceilings where Anne does a lot of her work. The first piece of art I saw hanging on the wall was the one she’s currently in the process of completing. Laying at its feet were tons of multi-colored fabric pieces, probably for easy access for Anne to sew into the work. There were boxes filled with various fabrics to my left and to my right – when Anne saw me eyeing them up, she laughed and said that she can’t help buying more fabric when she likes a material, but she sometimes forgets what she already has. 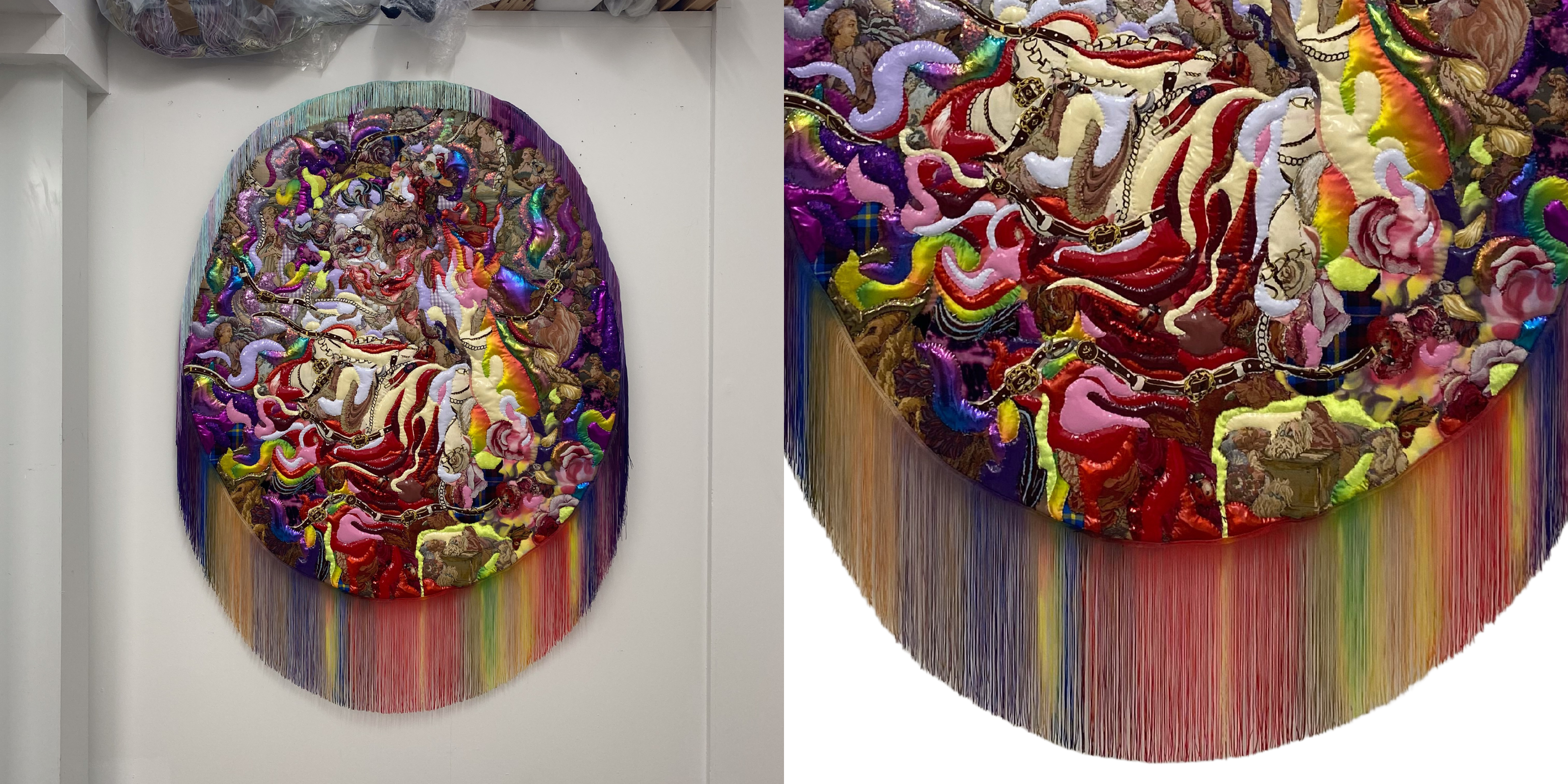 She then gave me more details about her current WIP (work in progress), showing me the piece of A4 paper pinned to the wall containing the digital mock-up she uses as a guideline. She takes her inspiration from classical paintings of the Rococo period, which is characterized by an exuberant, ornamental and playful visual language. She builds her compositions with various fabrics, colors, and textures – oh so many textures! Silk, wool, cotton, latex, glitter, even Swarovski crystals. She states that she “paints with materials”, and that couldn’t be more true. Her current works are oval in shape, with hand-painted fabric fringes that hang beautifully from the edges as a frame. However, I spotted an older work of hers in the studio that was on canvas, which I found intriguing because I could see the developments in the form of her works. She has gone from using fabrics and materials in a more traditional format like canvas to creating wall hangings that, as Anne would say, challenge an underlying hierarchical system because historically, sewing or weaving has been perceived as a craft within the realm of decorative arts, and not as a part of the fine arts. 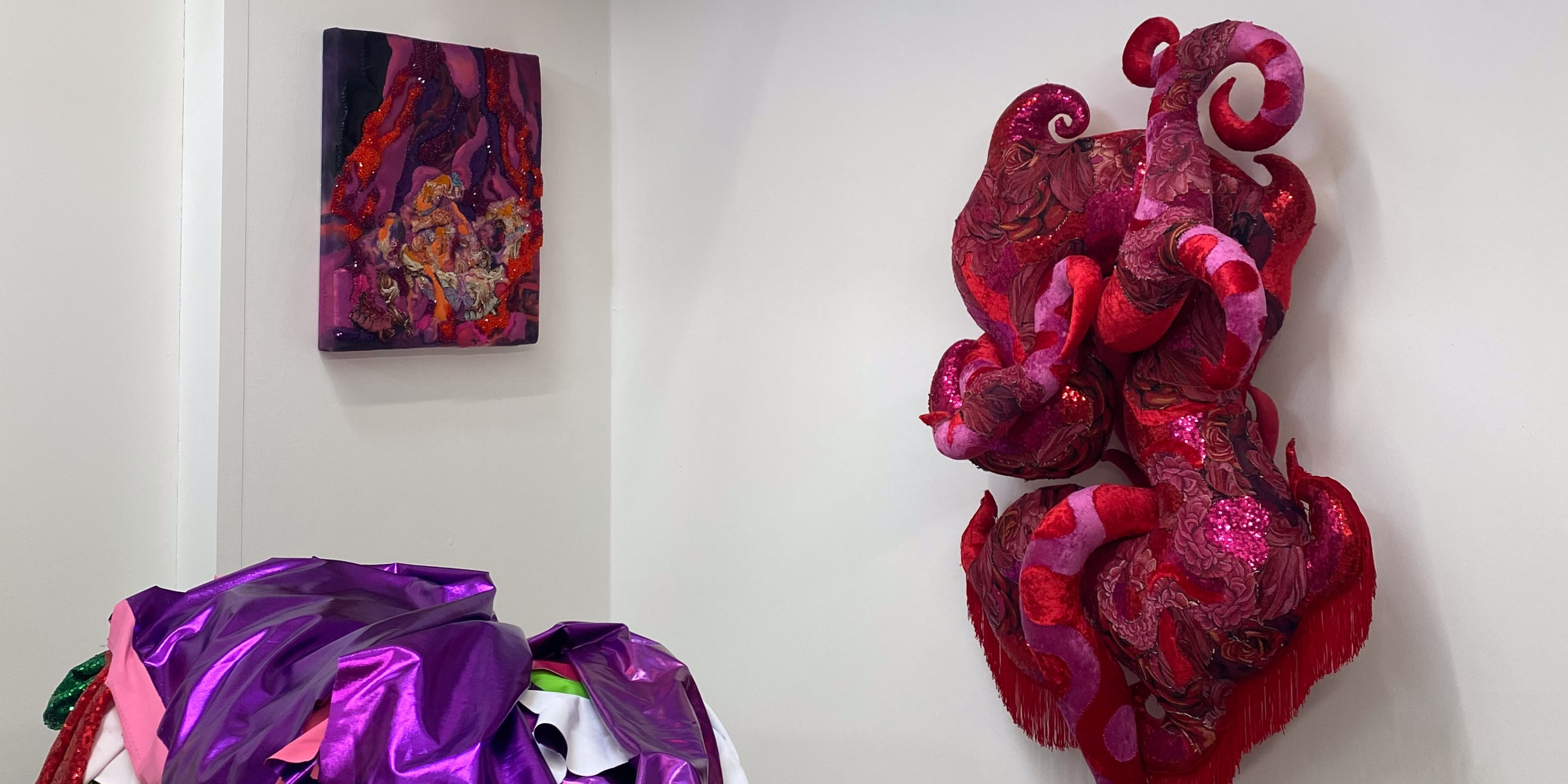 I loved to see the works on canvas, because that is where Anne used crystals and other more tactile materials that created a landscape, moving with the light and jutting out at the viewer. She was kind enough to even unwrap one that I spotted in a corner, and I thought it was so stunning when it came out of the packing that I almost didn’t want her to put it back. However, she had to re-pack it because the walls were already quite full with the newest format in her practice. She has begun working with sculpture, creating abstracted fabric formations reminiscent of thick tentacles, curled spikes, or even entwined body parts. There were details in these sculptural forms that made it clear they were by Anne, with her signature fringes and combination of a multitude of fabrics and variety of patterns.

It was incredibly exciting to visit Anne in her studio, as her works are powerful, intricate, and absolutely stunning. Keep an eye out for her upcoming exhibitions in 2023 so that you can see her works in person. In the meantime, check out her available works on Artscapy like Untitled (After Fragonard) I. 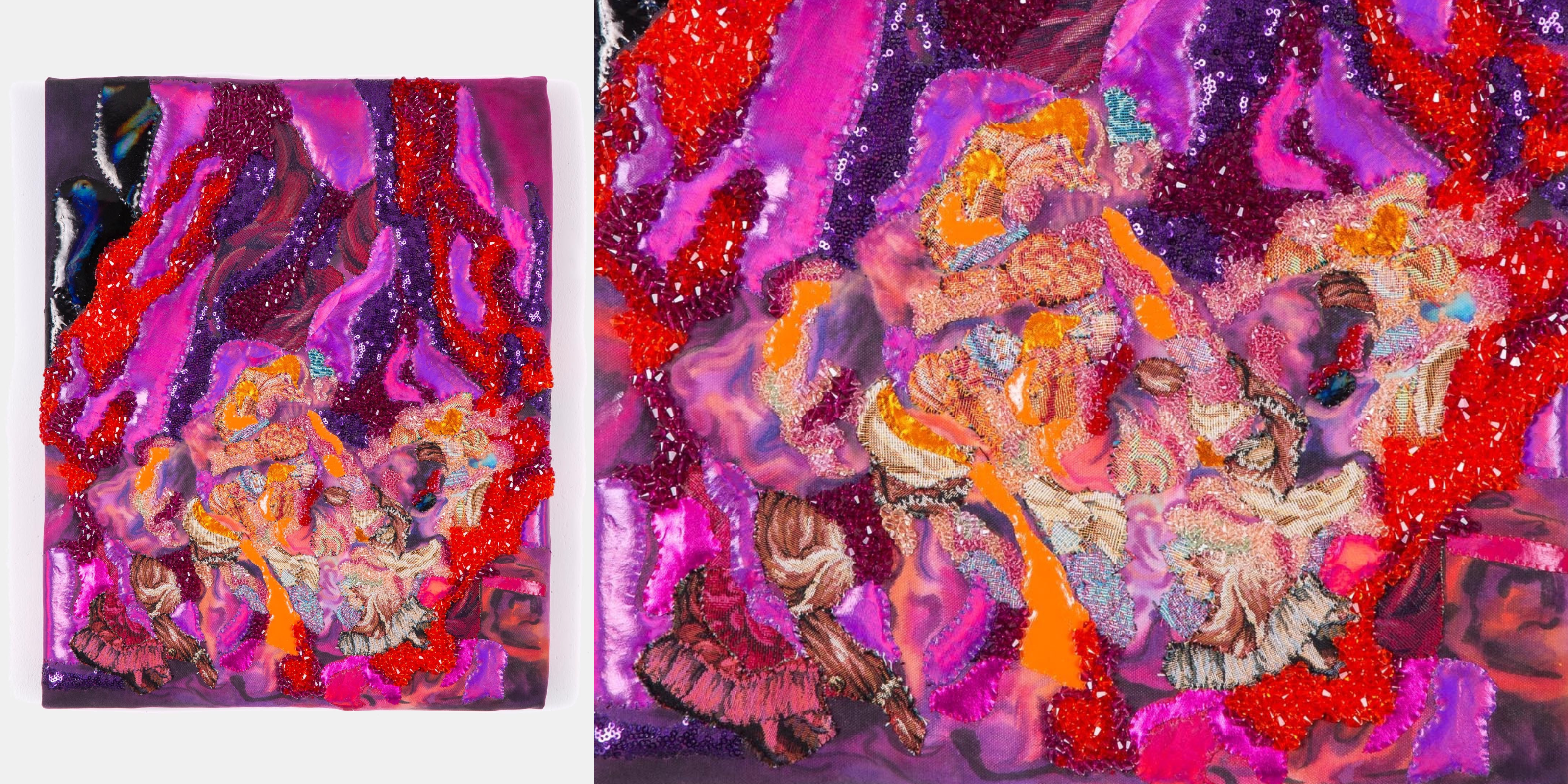