Vivid colour, rich texture, intricate pattern- “this could refer to any artist”, you may think. Yet today, we are referring to a very specific emerging artist that is conquering the art world’s heart- Jadé Fadojutimi.

As one of Britain’s most exciting young artists, Fadojutimi completed her MFA at the Royal College in 2017, which was the same year as her first solo show at Pippy Houldsworth Gallery in London. She is currently one of the youngest artists whose work is in Tate’s collections, and last month, she was the highlight at Sotheby’s, Christies and Bonhams auction lots, selling for more than triple its high estimate. As an artist that might (or not) be on your radar, this is our chance to discover a little more about the intricacies of Jadé Fadojutimi’s world.

“My works are reflections of myself and the objects which I surround myself with.” 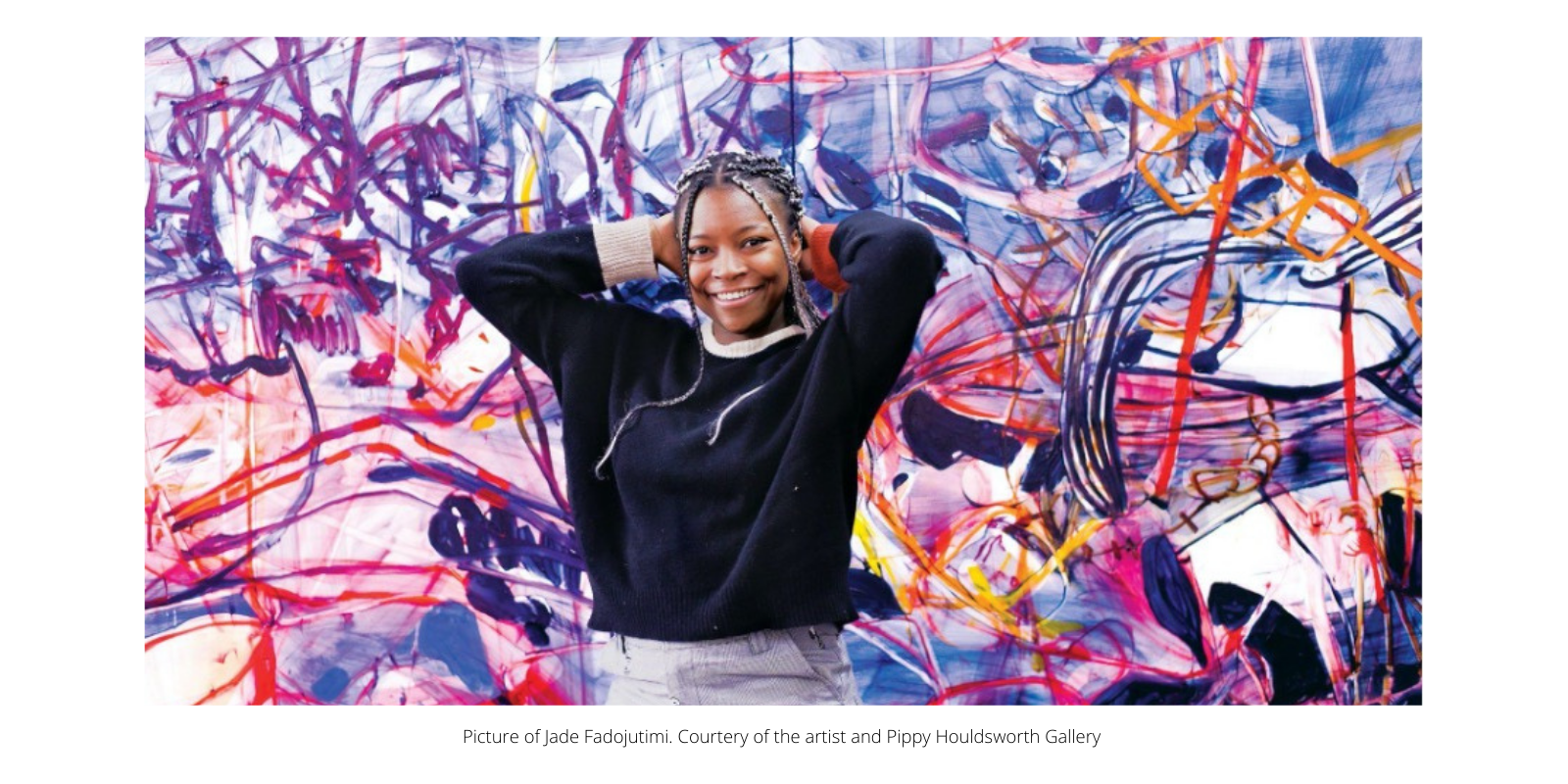 At the very core, Fadojutimi’s practice investigates the notion of identity. Her work is shaped by her studio surroundings and personal possessions, driving and inspiring her colossal canvases of graphic intensity. She interrogates the idea of identity, viewing herself as a canvas on which to present an identity, just as she sees her works as her canvas to portray versions of herself. She and the canvas become one and the same for the artist.

Working from her South London studio, Fadojutimi surrounds herself with important personal objects: her favourite gingham tea dress and her treasured Teddy; it is as if we step into her identity as we cross the threshold into her workspace. Truly integral to Fadojutimi’s practice is this fascination with objects- she perceives objects as a component of our identity. 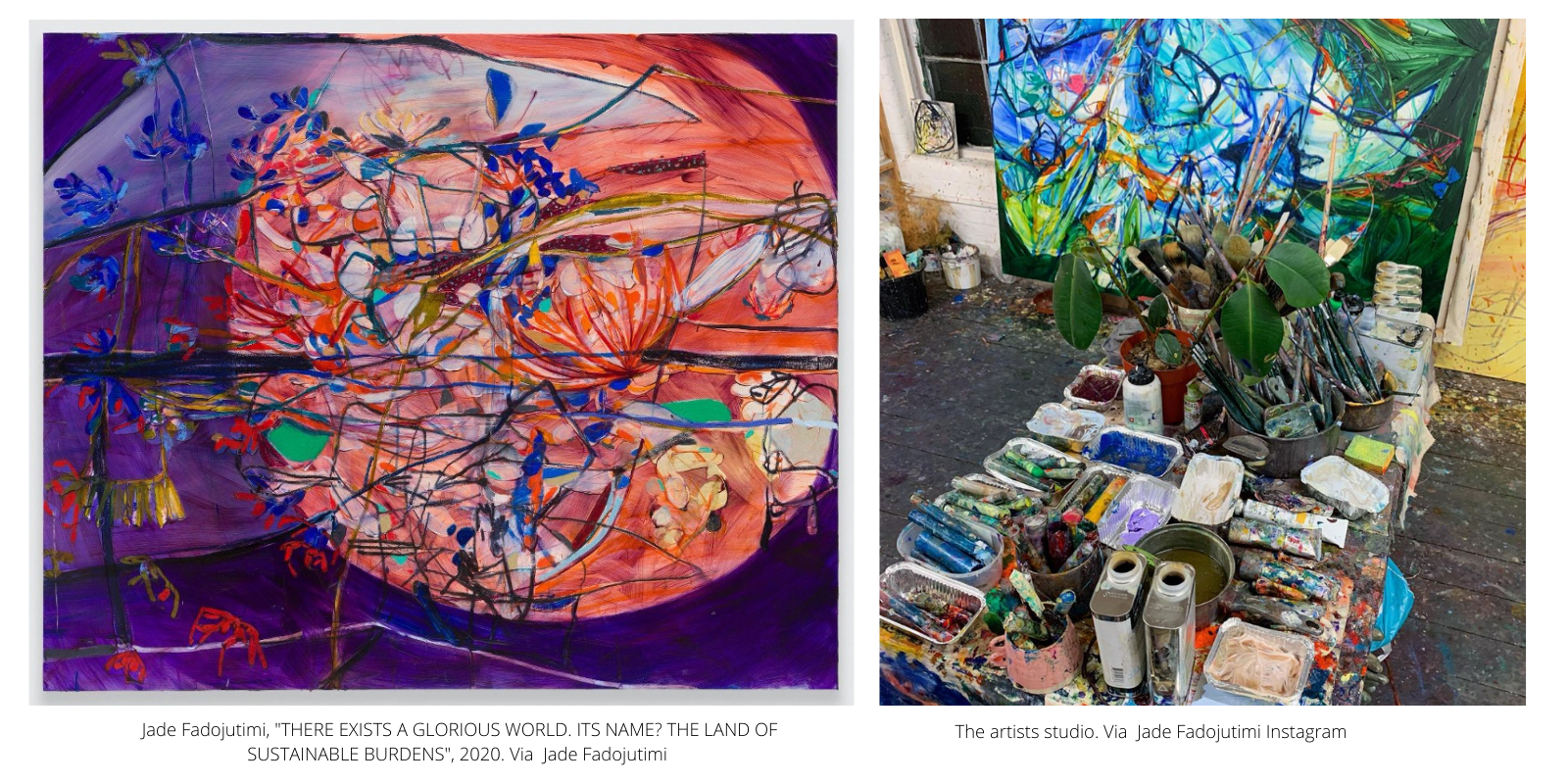 Growing up in East London, Fadojutimi always found the ‘big’ questions of identity troublesome at best. In interviews, she often explains how she feels displaced and never quite sure of her identity, especially in a world that is so quick to judge and place identities upon us. At the core of her practice is her cyclical questioning of identity in an ultimate attempt to understand better who she is.

“The whole studio is a diary of myself.”

Fadojutimi’s palette is often a colourful riot, an explosion of energy laid out in oils and acrylics; her work pulses with vibrancy. The artist describes colour as very precious to her, and she exploits intense pigment to articulate her emotions. 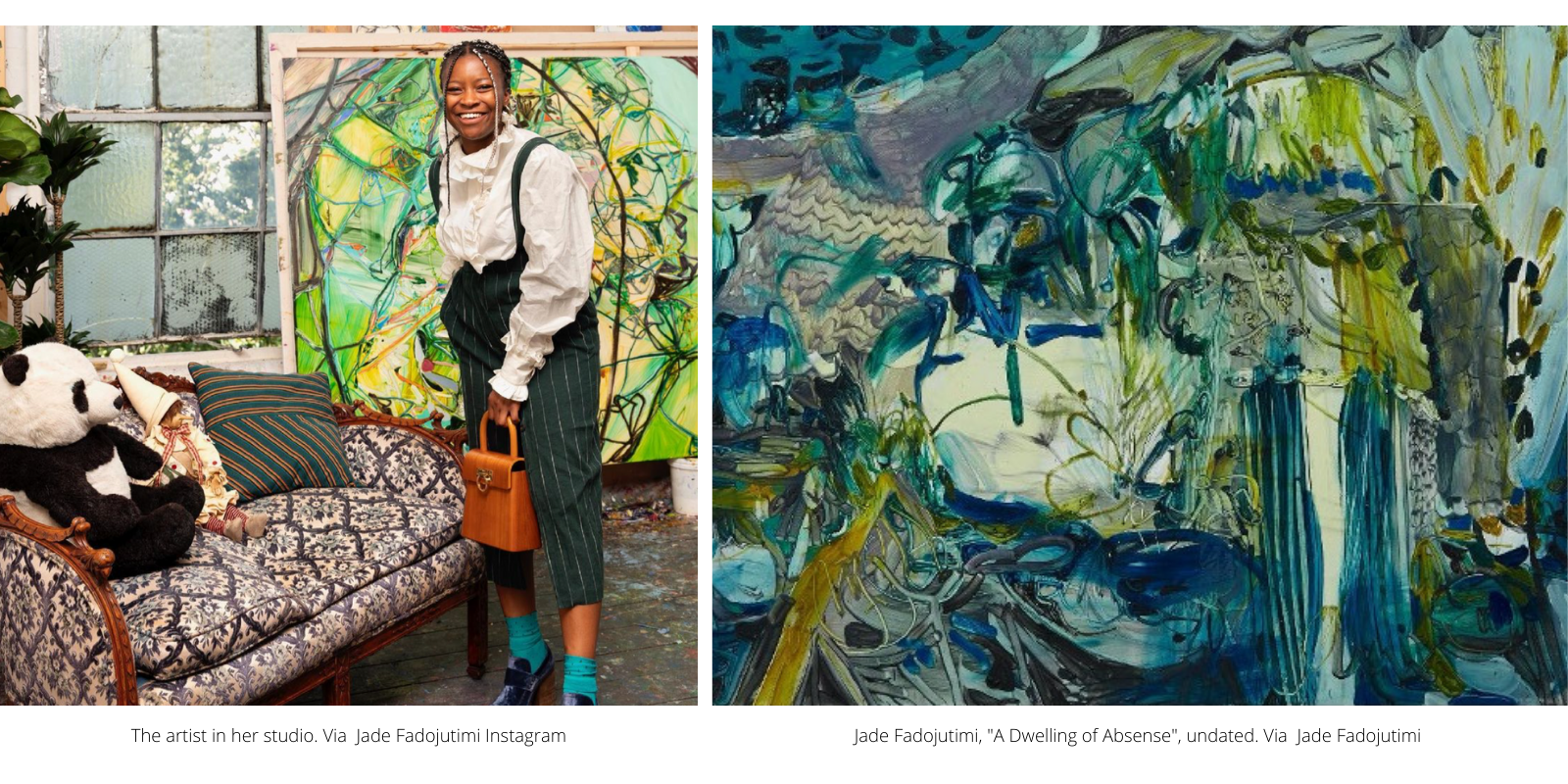 At such a young age, Fadojutimi seems to be taking the art world by storm with her poetic gestures of overlaid colours. It is still early to understand what pathway her career is going to take but, so far so good, right? Anyway, we are curious to see if any of our Artscapers is an owner of one of her beautiful pieces- we are out here trying to grab one for ourselves as well!

If you are interested in her work, we suggest these two exhibitions: one in the Liverpool Biennial 2021, The Stomach and The Port, at Bluecoat, Liverpool and the other at The Hepworth Wakefield in Yorkshire, which is due to start in April 2022.