Female street artists - can you name any? Street Art has long been known as an exclusive boy's club. The first names that probably come to mind are Banksy, JR, Blek Le Rat, Stik, to name a few. But why are female street artists so unknown? It is of course hard to have a precise answer for that... So, we are taking it on ourselves to  find out how some of these less well known, but wonderfully talented, female street artists are making a big impact on the streets. Let's explore! 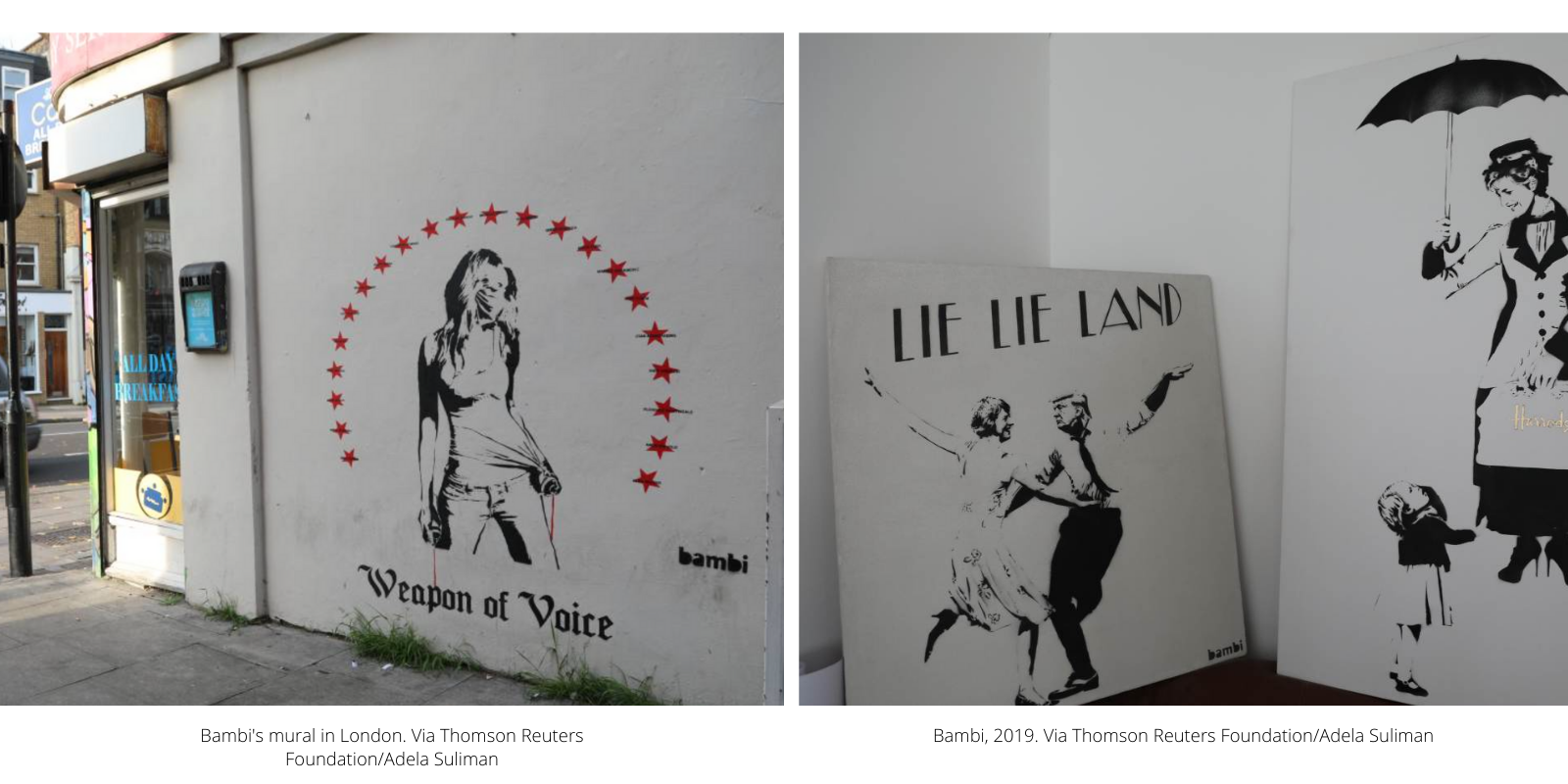 Also known as "the female Banksy", Bambi is one of the UK's most successful female street artists. Despite her mysterious identity, Bambi's work has been commissioned by celebrities such as Kanye West, Brad Pitt and many others. But what makes Bambi's work much more well known than many of her female counterparts? Bambi's work focuses on exposing the impact that the patriarchal has on contemporary female identities, highlighting these long-standing issues that are still impacting women to this day. Although she is addressing  feminist subject matter, her work is often perceived as masculine due to her assertive and robust style… something society tends to consider an inherently masculine trait, and is very prevalent in Banksy’s work (who, even though his identity is officially unconfirmed, we all assume is a man!). 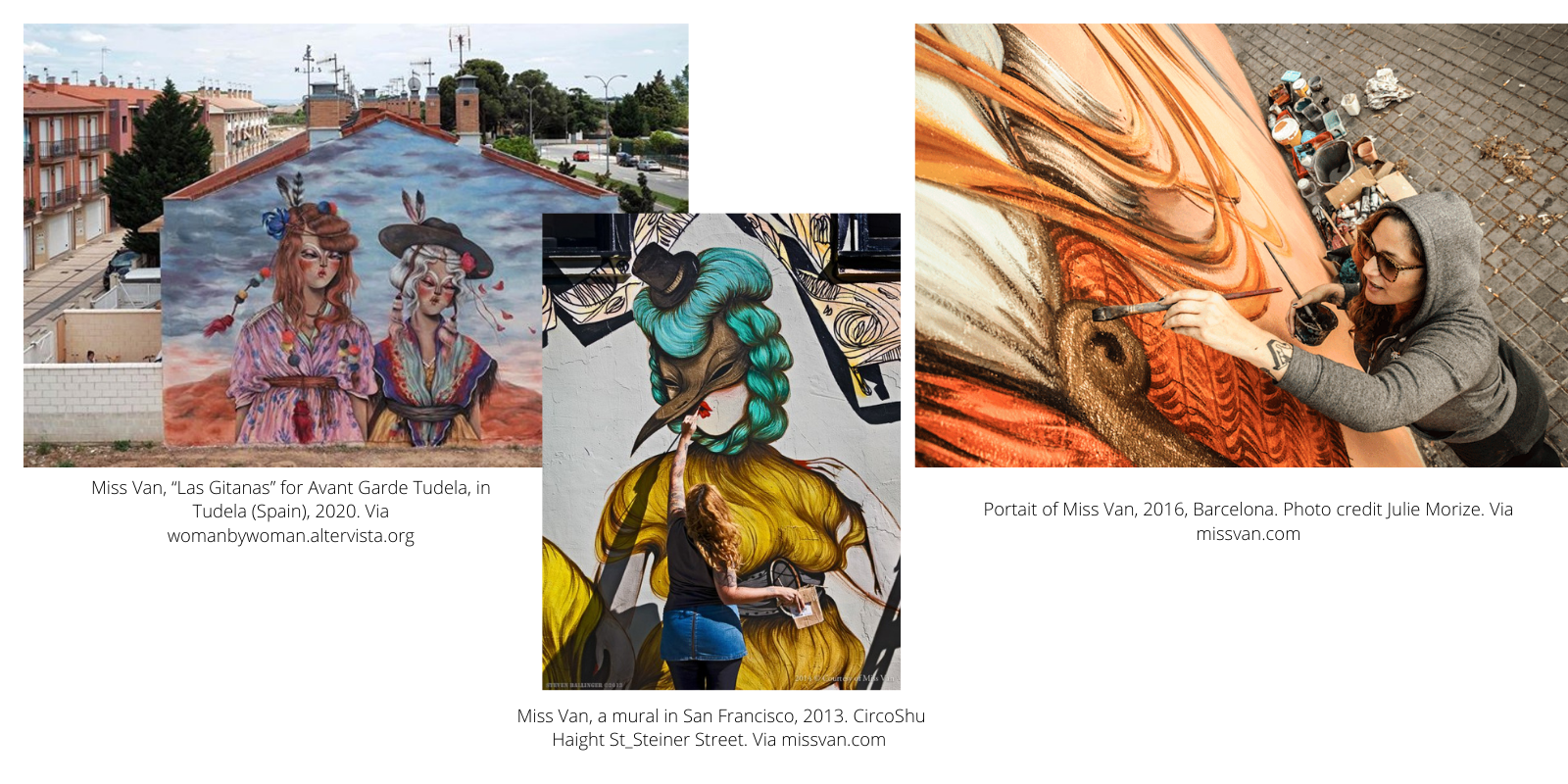 If we go back 30 years ago, to 1993, we will find Miss Van who initiated the feminist street art movement. Miss Van’s work is quite distinctive, so she can easily be spotted easily throughout the streets of Toulouse. She has a strong visual identity defined by sensual female characters which she calls ‘poupées’, (a Latin phrase which interestingly translates to ‘girl/doll/puppet’ as though these are all simply interchangeable). Miss Van uses these characters in her work to highlight the deep roots of societal constructs, especially when it comes to how women are perceived/valued. Her depictions of what appear to be provocative, masked women with eroticised bodies can be interpreted as a way of reclaiming ownership of the female body. 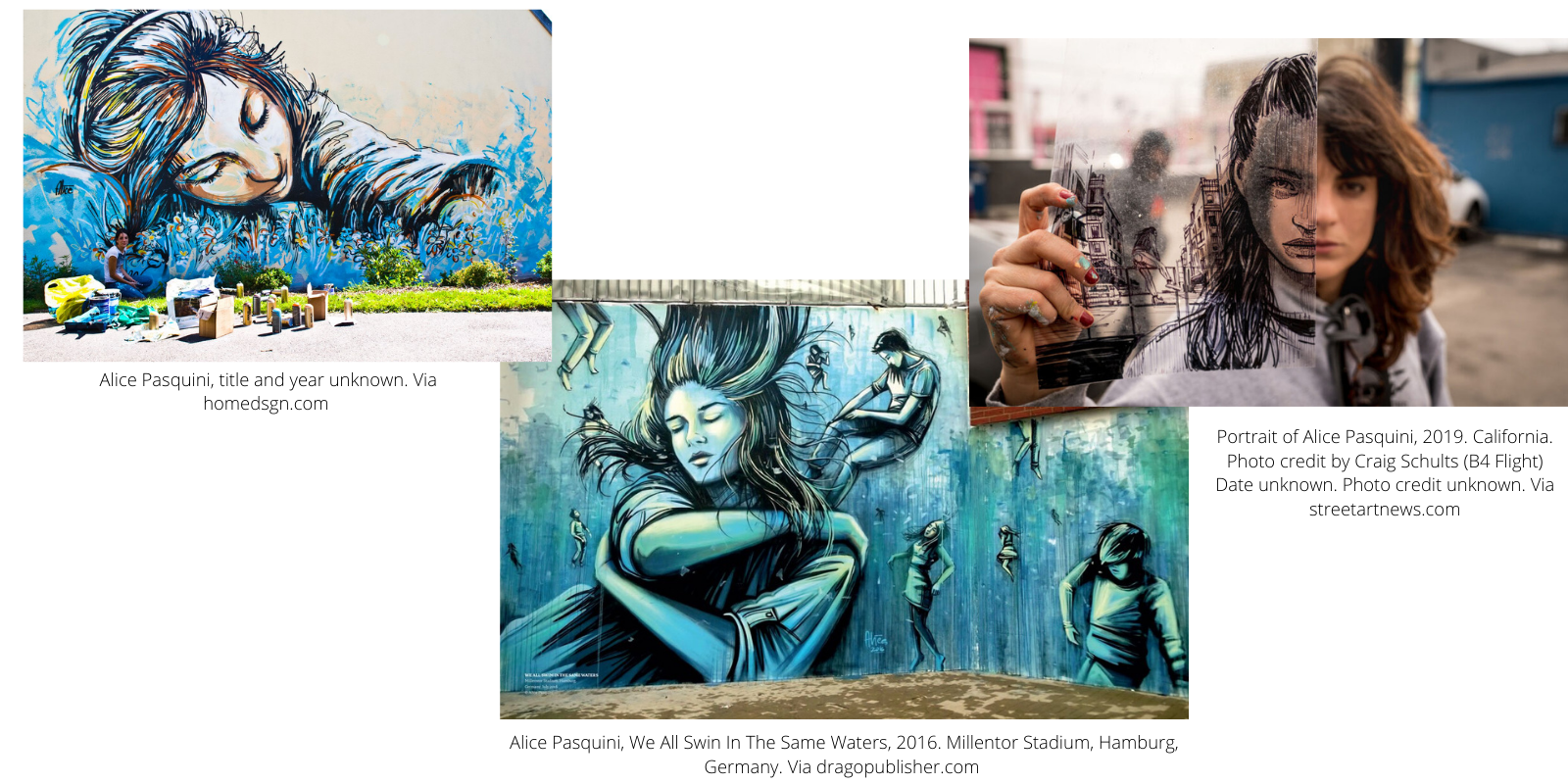 The Italian street artist Alice Pasquini is often recognised as the artist that portrays acts of kindness in her work. Pasquini's work revolves around the female body, and through emotional representations of women, in an outstandingly feminine style that is characterised by softer tones, curvier and more organic lines. Her work is characterised by prominent use of pastel colours and intimate depictions of private moments. The artist believes that through these private moments, she can create a connection with the viewers' inner world. Her walls are dreamy, and if you have come across her work, you surely  wouldn’t miss it! 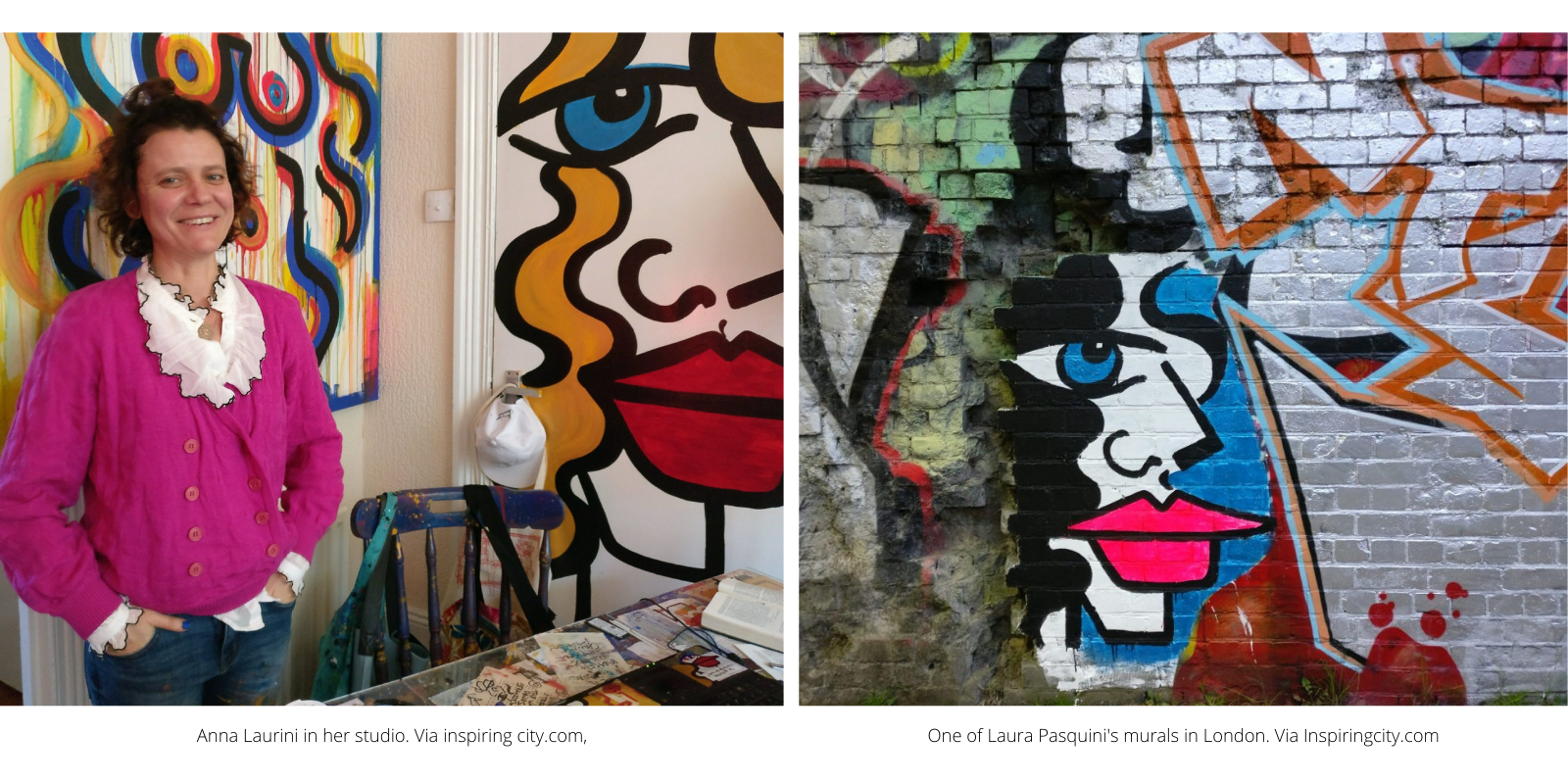 Last but not least is Anna Laurini! Laurini is based in East London and that is where you will find the majority of her bright and funky murals. Her work can easily be recognised through her characteristic pop and abstract art style of female faces with outlined features in black paint (probably makes you think of STIK!). Laurini is an artist herself and she decided to take her work outside the studio as a challenge. Luckily for us, she enjoyed it a little too much to ever stop! 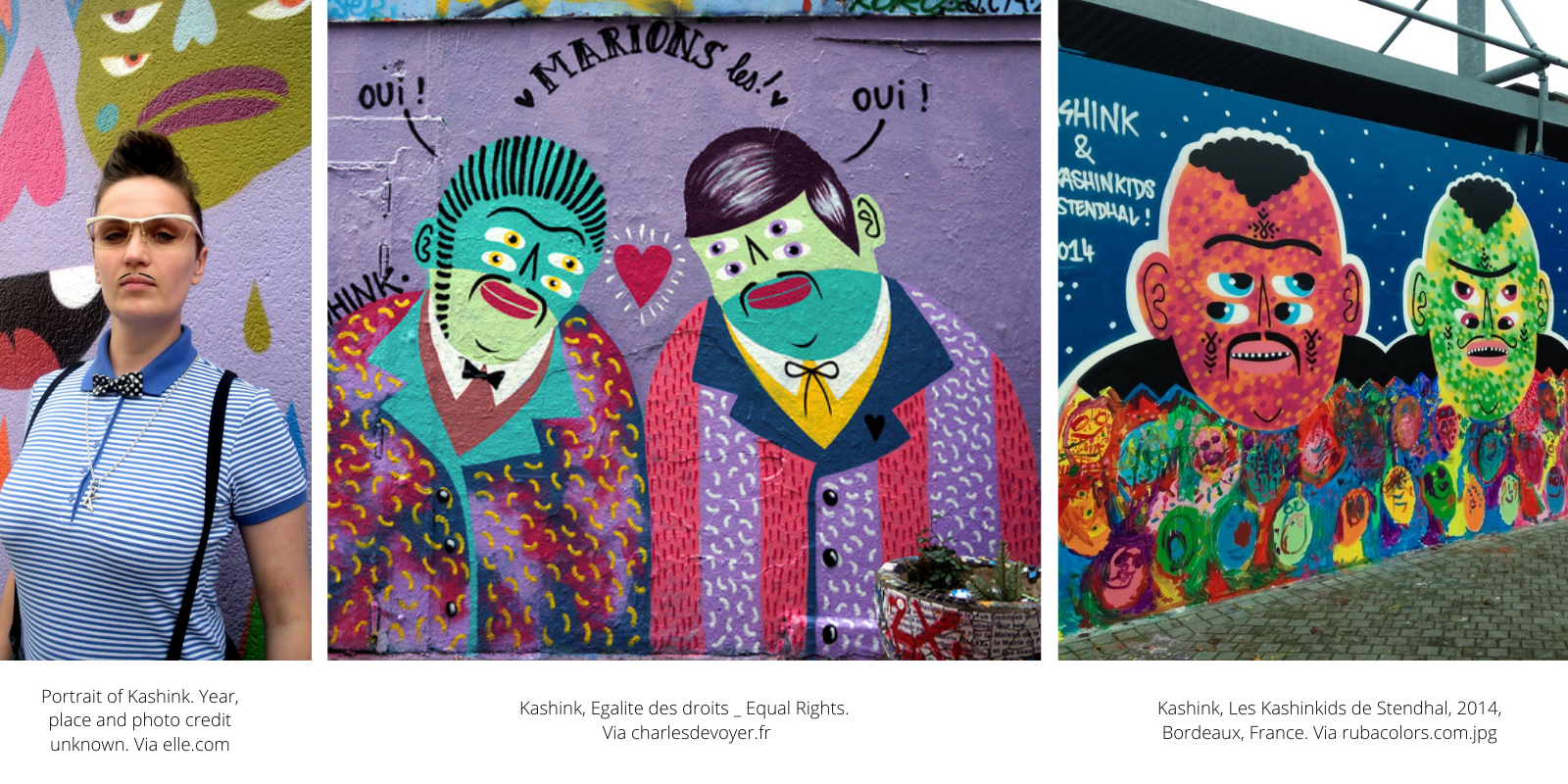 Known for her moustache - indeed, she has never been seen without a pencilled moustache - French street artist KASHINK, challenges stereotypes surrounding the female body and, ultimately, gender by painting characters that do not fit in the stereotypes society forced on us. KASHINK's iconic signature are her four-eyed characters with a drippy moustache- by that, you can already see that her practice is  defying gender! She hopes that her work and her ethos towards her life will change how we perceive beauty in our everyday lives. KASHINK's work is colourful, quirky, fresh and young! 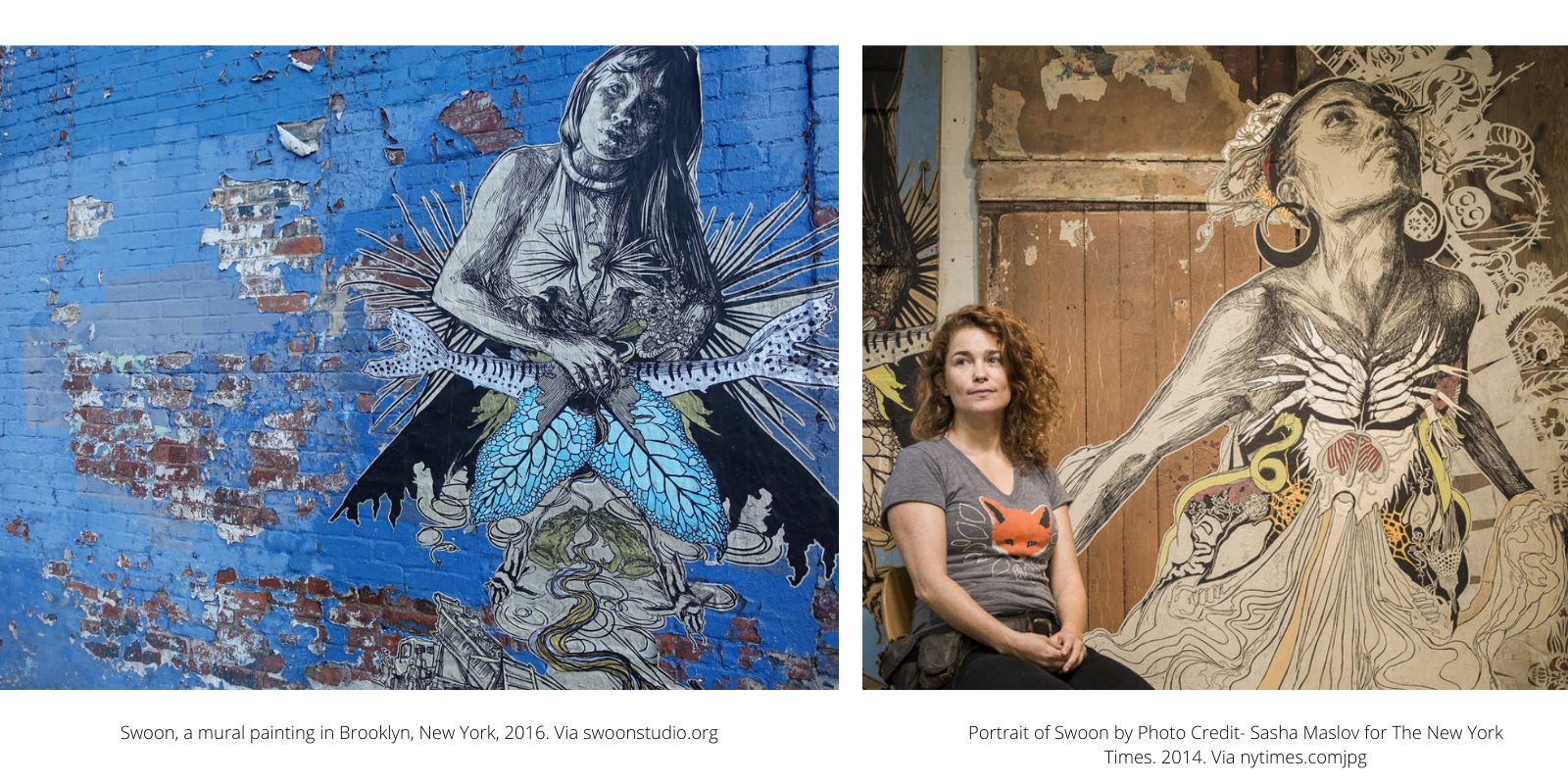 The next female street artist to be highlighted is the talented SWOON. Although you may not have come across her before, SWOON actually started her career in the early '00s in the same era as the big names such as Banksy and JR. SWOON's work also goes beyond murals, often taking the form of large art installations or sculptures. With clear influences from printmaking techniques, her murals offer detailed wonders of texture and patterns. This artist plays with realism and fantasy, creating whimsical fairy tales, but which are grounded in delicate subjects related to her personal life experiences. 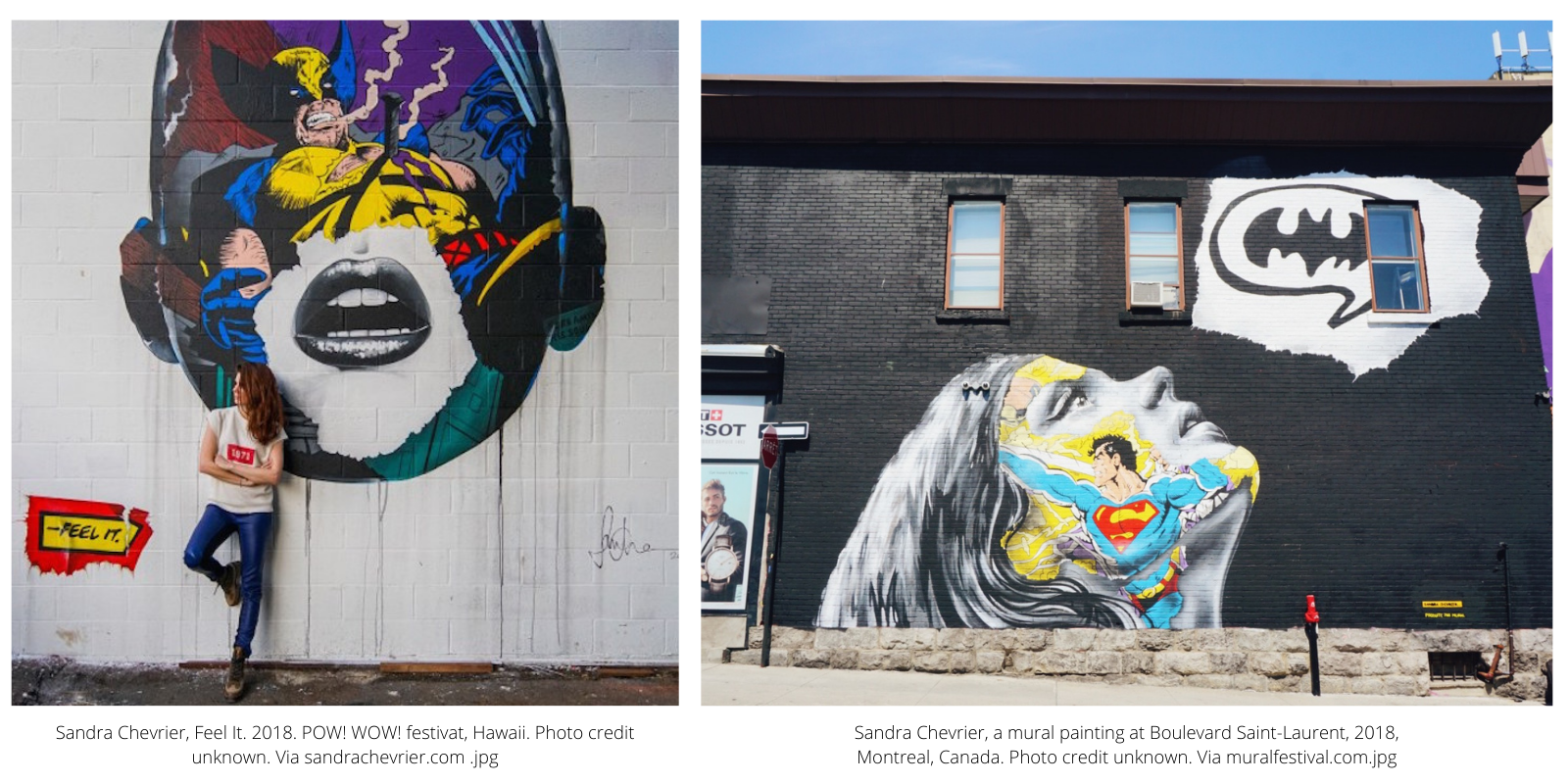 Based in Montreal, Sandra Chevrier has gained notoriety on the art scene. Her work takes quite an interesting creative approach as she begins by drawing the eyes of her female subjects first. Later, by adding layers, she masks their faces with characters and pop-art references, often from comic books. Chevrier’s works can be perceived as exposing the oppression that women endure in our contemporary society. Seen in this way, the superheroes are used as a tool to demonstrate the correlation between the ‘fantastical’ and the ‘real’ world: despite their perceived power and freedom; they, like humans, are also fragile and flawed.

These amazing artists are not only reshaping ideas around female perception throughout the streets but they are also pushing the boundaries of the street art movement itself by bringing in new techniques and meanings. With so much quality and the breadth in all these female street artist’s works, it does feel pretty sad to face the realisation that they are still fundamentally so much less well known than their male counterparts.