This week we asked Alex, (Founder of Artscapy and experienced art collector) to talk to us about his passion for street art and share the three top artists that are on his radar. We started off by asking him “Who is the next Banksy?” He replied “I think the real question is: what comes AFTER Banksy?” A fair question, we thought!

Banksy’s hype was both good and bad for the market. It has raised both awareness and acceptance towards street art as a valuable fine art form, but, it has also pushed the prices of some street art so high, that it's now considered way out of reach for many of the ‘before-the-hype’ street art fans. Yet, Banksy’s significance in the art world is undeniable and he has definitely raised the bar of what ‘street art’ means. 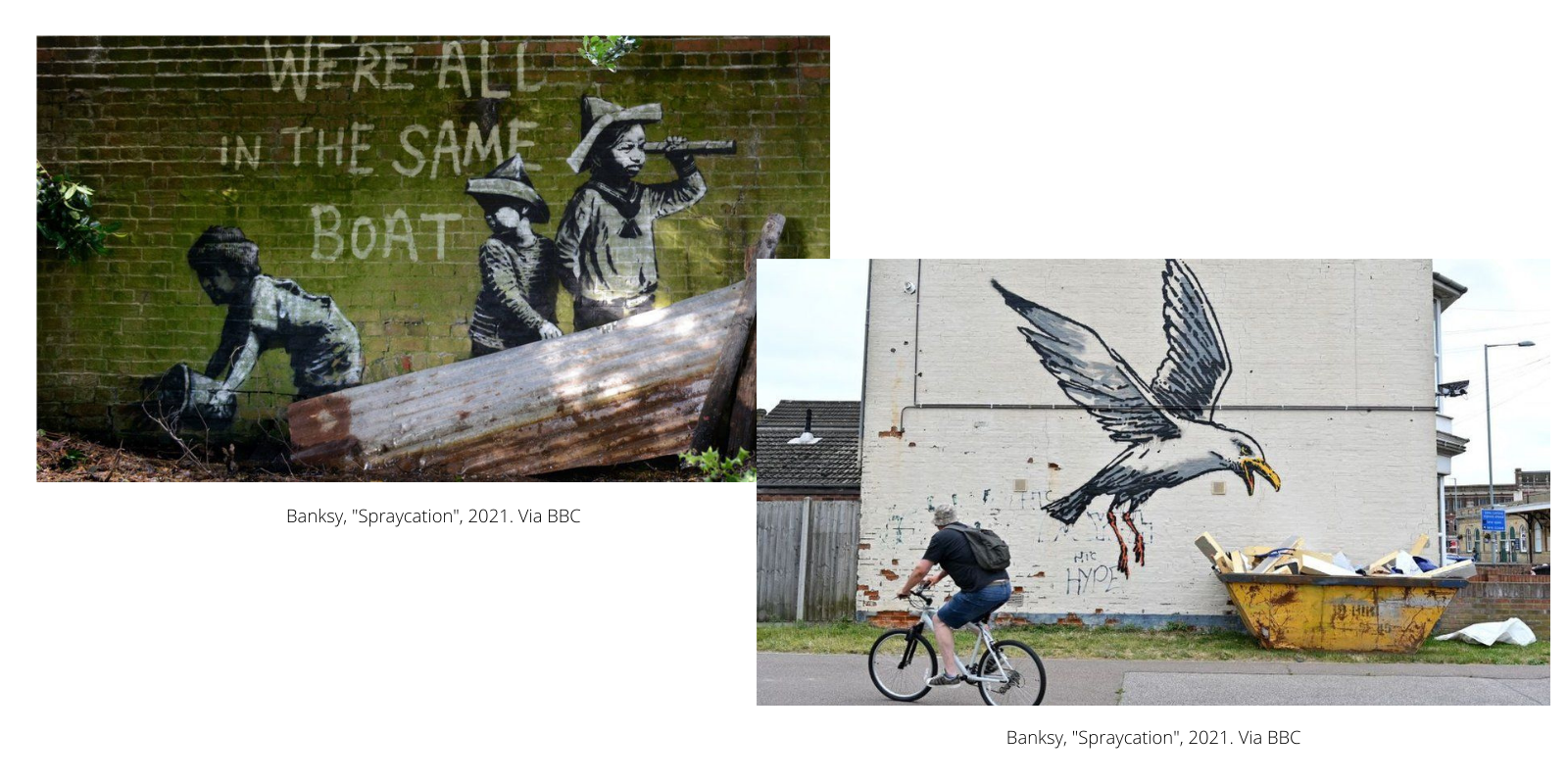 Going back to Alex’s counter-question to ours, it does raise a good point here... Rather than questioning how to be better than Banksy, Alex is questioning how and when future artists will disrupt the art market in a new, yet just as impactful way as Banksy. This appetite for artistic innovation happens more often than we think actually, and happens almost cyclically: the art market becomes stagnant and, historically speaking, that tends to be  when the new art movements appear. That being said, it’s not ultimately innovation alone that tends to create the shockwaves - every art movement needs a ‘breaking point’, and it tends to be that, coupled with innovation that then defines the ‘next big thing’.

With this in mind, Alex has been keeping an eye on three street artists who may just hold the answer to this burning question! - Perhaps even a tip for your next acquisition?!

Let’s start with Pejac, shall we? 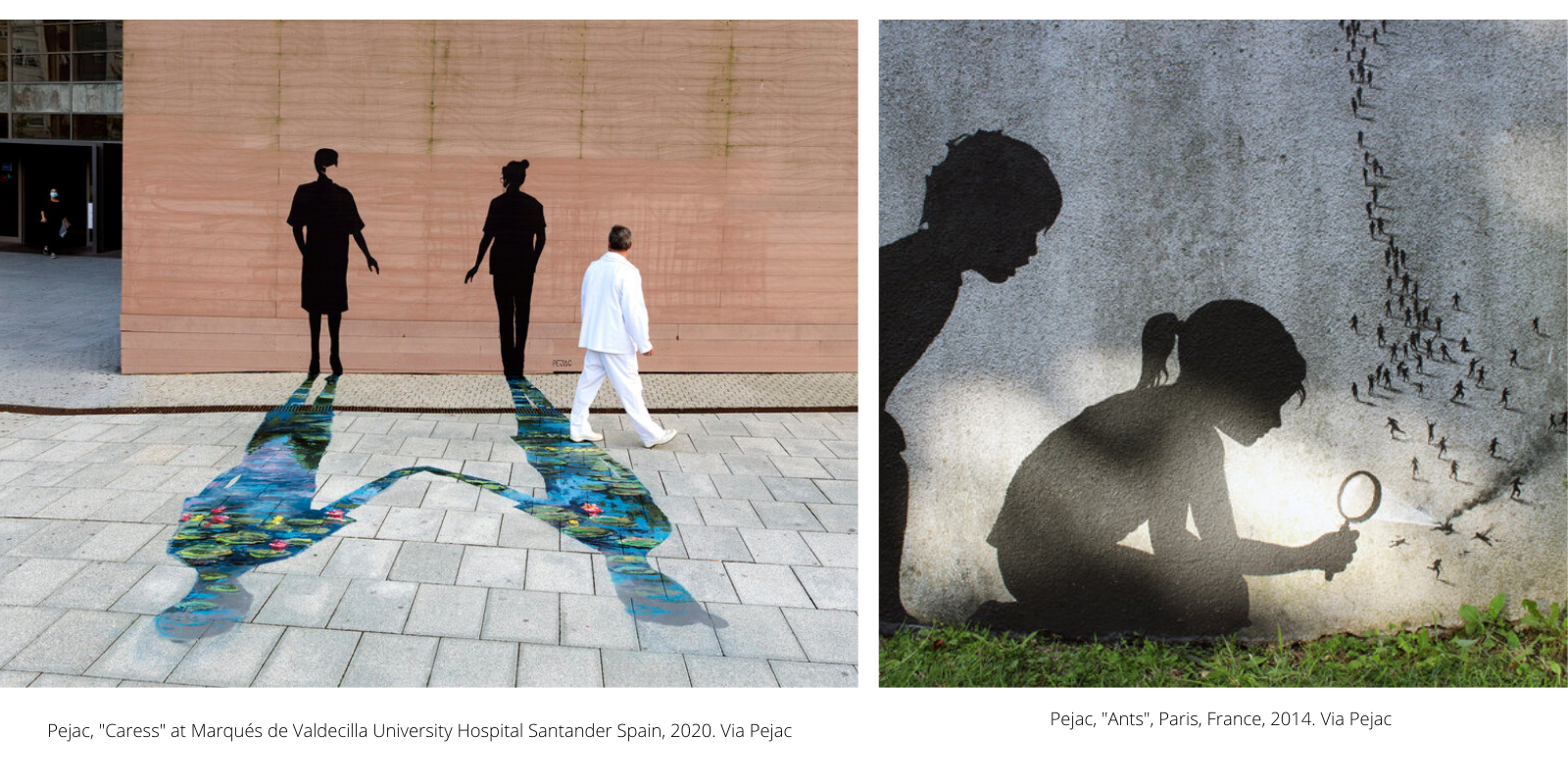 Pejac is one of the artists that has really caught Alex’s eye - and, we are not surprised! If you haven’t heard of Pejac yet, we doubt you’ll be letting him leave your sights from now on. Pejac is a Spanish street artist, highly admired for his minimalist and emotionally charged murals. In his studio works, he’s skillfully working with pencil and chalk, often to extreme detail, combined with a few coloured details that make a striking impact. He has a very interesting way of perceiving the world which is reflected in his poignant social-economical narratives that explore topics such as peace, climate change, freedom, to name a few.

While mixing fantasy with reality, you will notice that decaying objects are a recurrent motif in Pejac’s works. Pejac seems fascinated with the fragility of all living things (especially us, as human beings and the planet earth). On this subject, he demonstrates a remarkable ability to create disheartening ‘realities’ through graceful and poetic narratives. Pejac opts for a sense of tenderness rather than abruptness when conveying his beliefs to the viewer, creating an empathetic space where it is easy for the viewer to (at the very least, subconsciously) relate to these imaginary scenarios. 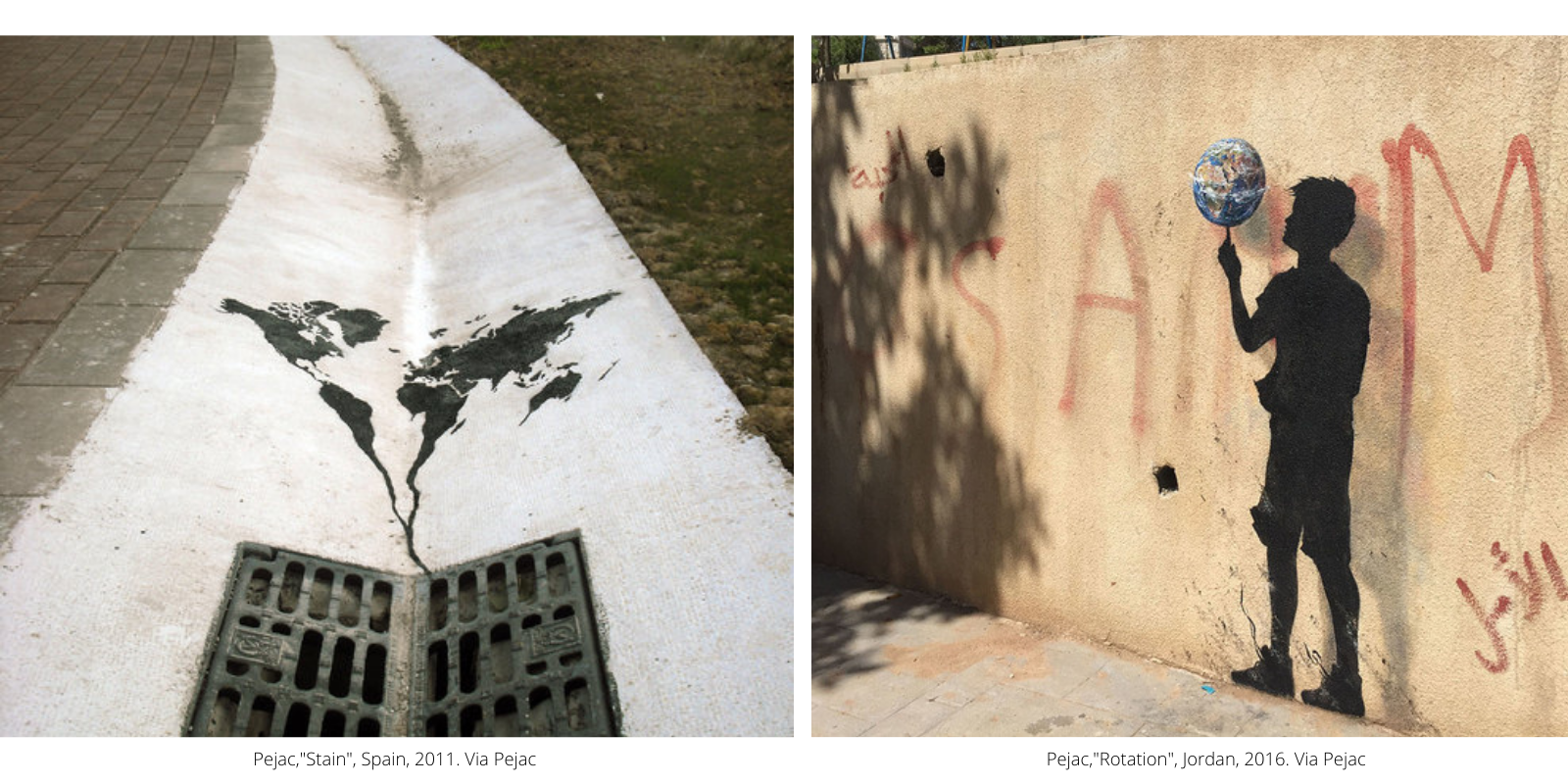 Pejac’s artworks that address environmental issues are brilliant examples of his use of this tenderness, and indeed subtlety.

“Pejac’s environmental critiques are one of my favourites! I think that great artists are gifted human beings because they are emotionally intelligent individuals. Pejac is a great example of that. The way he connects with the viewer through his messages can surely change the world” 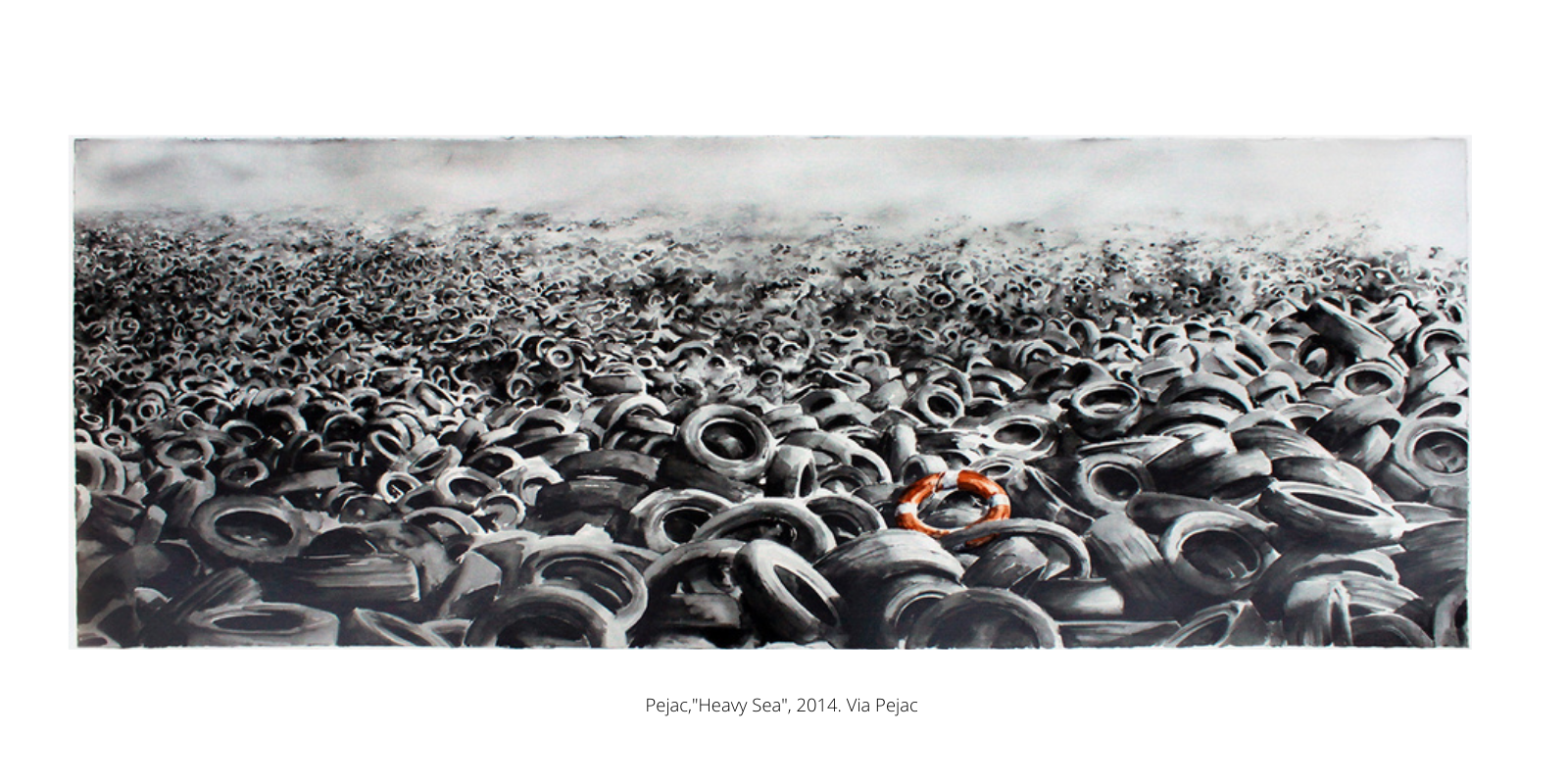 In these environmental artworks, Pejac pushes the viewer to confront some uncomfortable realities about the future we are creating as a society, whilst at the same time reminding us that we as a human race are ultimately in control of our own destiny. Heavy Sea (pictured above) is quite a powerful artwork that clearly illustrates these ideas. It is an overwhelming image to digest because it depicts such a raw narrative about the sheer extent to which we are damaging the environment. The bright orange lifebuoy is strategically placed- not too close, not too far; just close enough to capture our attention- which brings a sense of helplessness (and even hopelessness) to the viewer. It is hard, as a viewer, not to feel an overwhelming sense of guilt and responsibility for these distinctly man-made problems that are affecting our natural world. Hopefully, Pejac’s works will inspire us to take positive action againstn the very worrying and very real state of climate change. 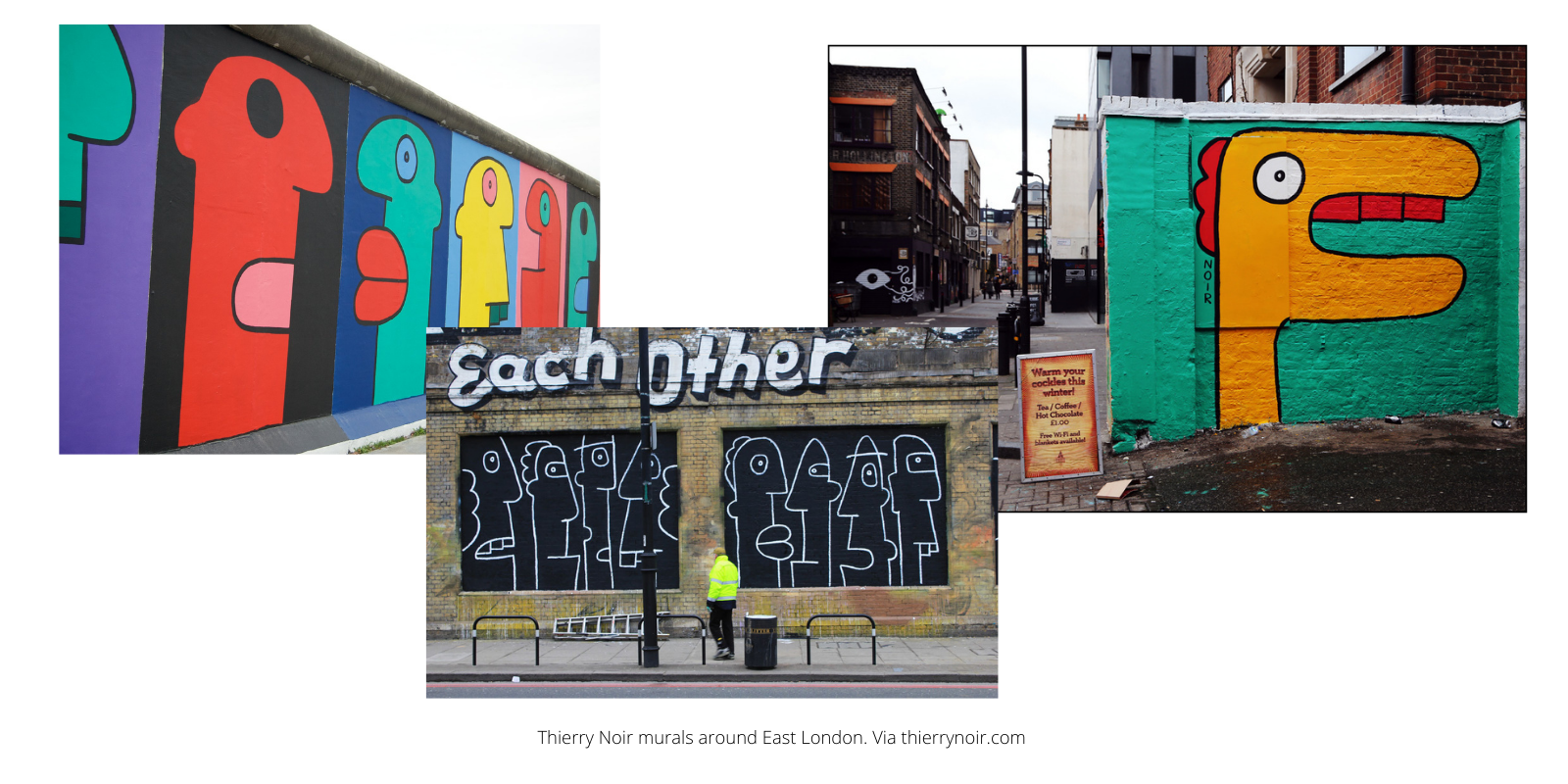 Next on Alex’s list after Pejac, comes Thierry Noir. Both Pejac and Noir's work are characterised by some pretty distinctive, stylised figures. But, in complete contrast to Pejac, Noir’s are bursting with brightly saturated colours. The key trait of Noir’s stylised figures are these bright colours, but also their overrepresented features (such as big lips, big eyes and big noses) that makes his work instantly recognisable, and indeed unmissable throughout the streets.

Fun fact: Noir is considered to be the first artist to have painted the Berlin wall in the 1980s; with a purpose to  counteract the melancholy and sadness of the old memory of the wall - quite different from what we assume Pejac would have done if he was in this situation...Or maybe not?! Who knows!

“Thierry Noir has been quite an underestimated artist until recently. The ‘Banksy-wave’ has certainly helped other artists to become recognised and Noir is certainly one of the artists that has benefited from that wave.”

Most of us cannot help but feel a smile creep up on our face when looking at Noir’s vibrant and quirky artworks! The way that we as the viewer connect with Noir’s works is very much a part of what makes him a great artist too! Noir creates a space for people to forget their everyday issues; in Noir’s world, his characters (that is,  each one of us) are the stars of their own show, through their mere  existence, and nothing else belongs to that world in that intimate moment of connection between his art and the viewer. Noir’s work also helps to teach us about some of the fundamental principles of happiness in this sense too: joy can be found within each one of us...everything else is irrelevant! 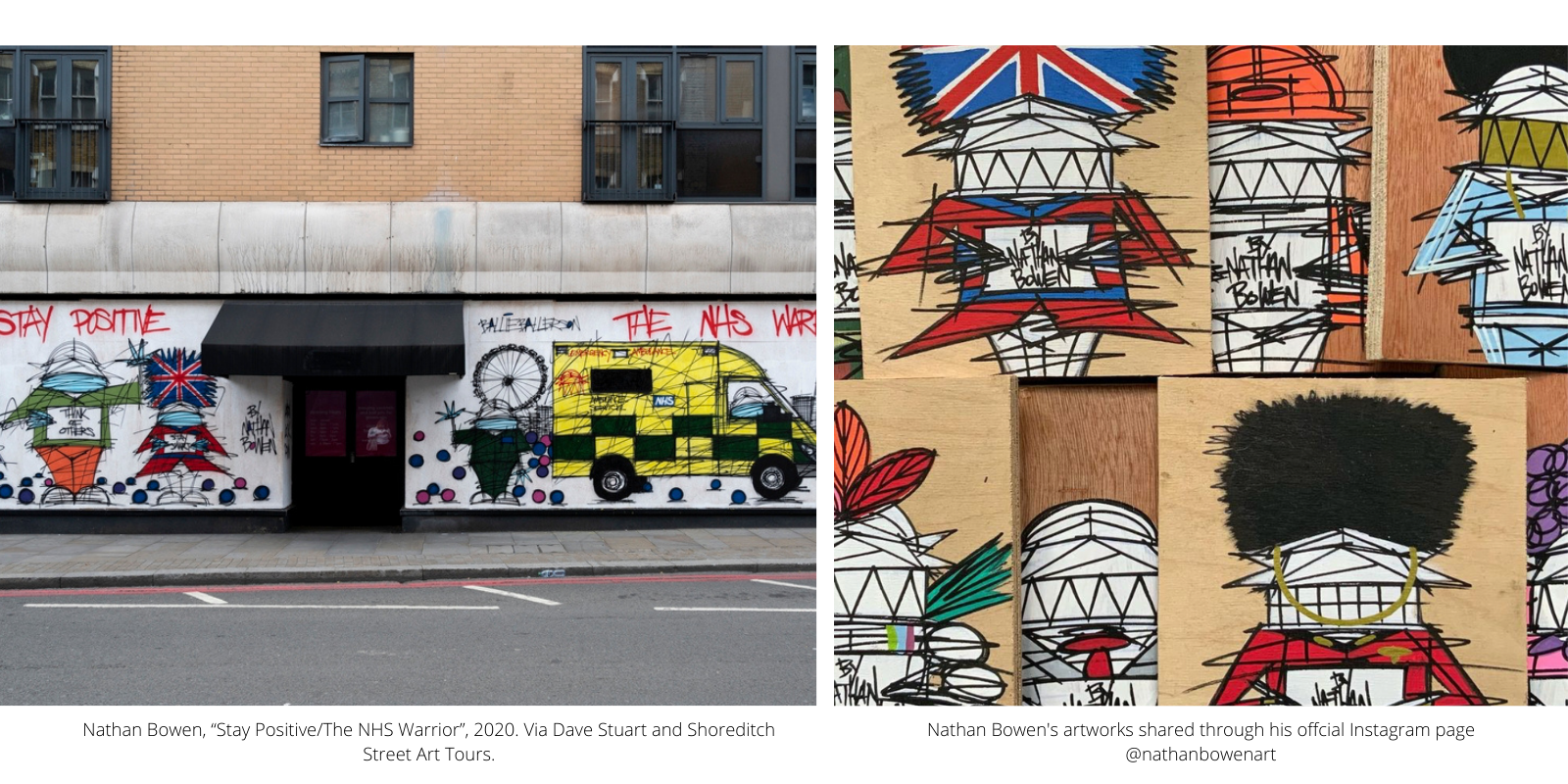 Last but certainly not least is Nathan Bowen.

“Insightful, sharp, vivid” - those are the first words that came to mind when Alex started to describe Nathan Bowen’s work to us. Although a lesser known name, Nathan Bowen, (a London-based street artist) sees his practice as a way to reclaim and reinvigorate dull and lifeless spaces in London. His work is spread across London and draws on some very characteristic ‘London-like’ details such as frequent references to policemen in their neon-yellow jackets, firemen, the Royal Mail trucks, the royal guards and many more!

“Nathan Bowen is an artist I relate to because I see his murals everyday on my commute. He is super relevant in the London scene, especially, because he portrays London’s culture in such a unique way, like no other street artist.” 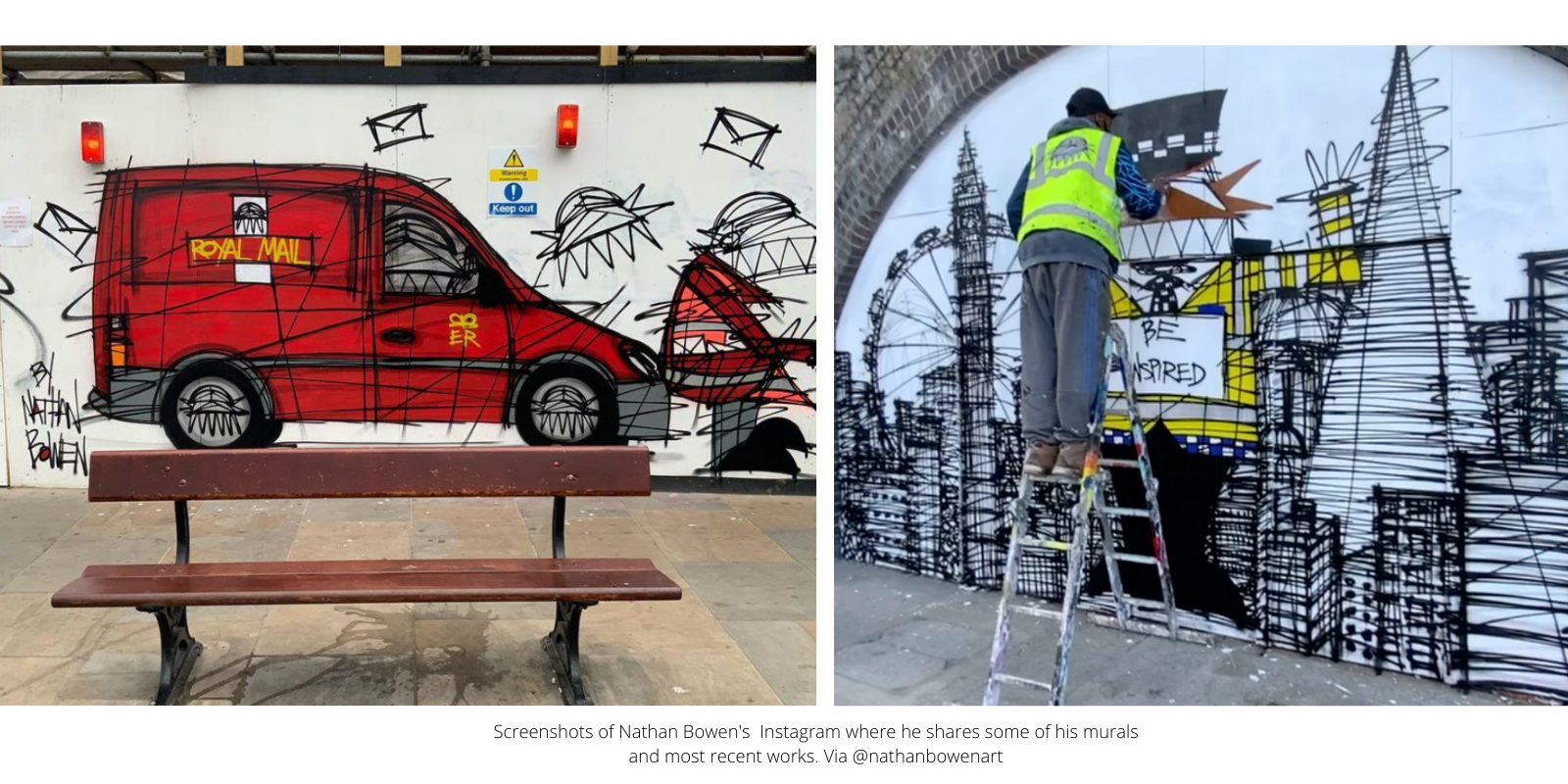 While Bowen describes himself as an ‘artistic gangster’, others seem to describe him as ‘the guerrilla street artist’ - a very significant, but also pretty prestigious comparison! Nathan Bowen’s works do seem to have a very subtle critique on working-class members, though his messages are definitely not as explicit as Guerrilla Girls.

Nevertheless, his work still stands out based on his originality in using spiky and assertive black lines, portraying a sort of ‘caricature’ of these working-class figures, which he refers to as ‘Demons’. He also references other high-profile figures such as Boris Johnson, Amy Winehouse and Queen Elizabeth. Why does Bowen call them ‘Demons’? Well...that's a good question for all of us to try and answer, because Bowen doesn’t seem keen on spelling it out for us any time soon!

With all that being said, we can definitely see why Alex loves all these artists! First, it is important to remember that what makes all these artists ‘great’ for Alex, is the fact that they are capable of creating some sort of meaningful and often powerful connection with the viewers. But are any of these artists becoming ‘as big’ and ‘as relevant’ as Banksy? We could say yes, but no one will ever know for sure… Only time (and the auction sales results) will tell!

What  artists are on your radar? Share it with us below!