Welcome back to our ‘Explained: Prints, Multiples, Editions and Offset Prints’ guide! As we explained in our previous article about ‘Prints’, this article is part of our ‘Collecting Series’ where we aim to clarify what frequently-used terms in the art world actually mean! In this instance, we are focusing on a term that you may encounter while browsing your next art purchase: ‘Multiples’. What are multiples? How different are they from prints? And how valuable are they? If these are some of the questions that are on your mind right now, you are in the right place! 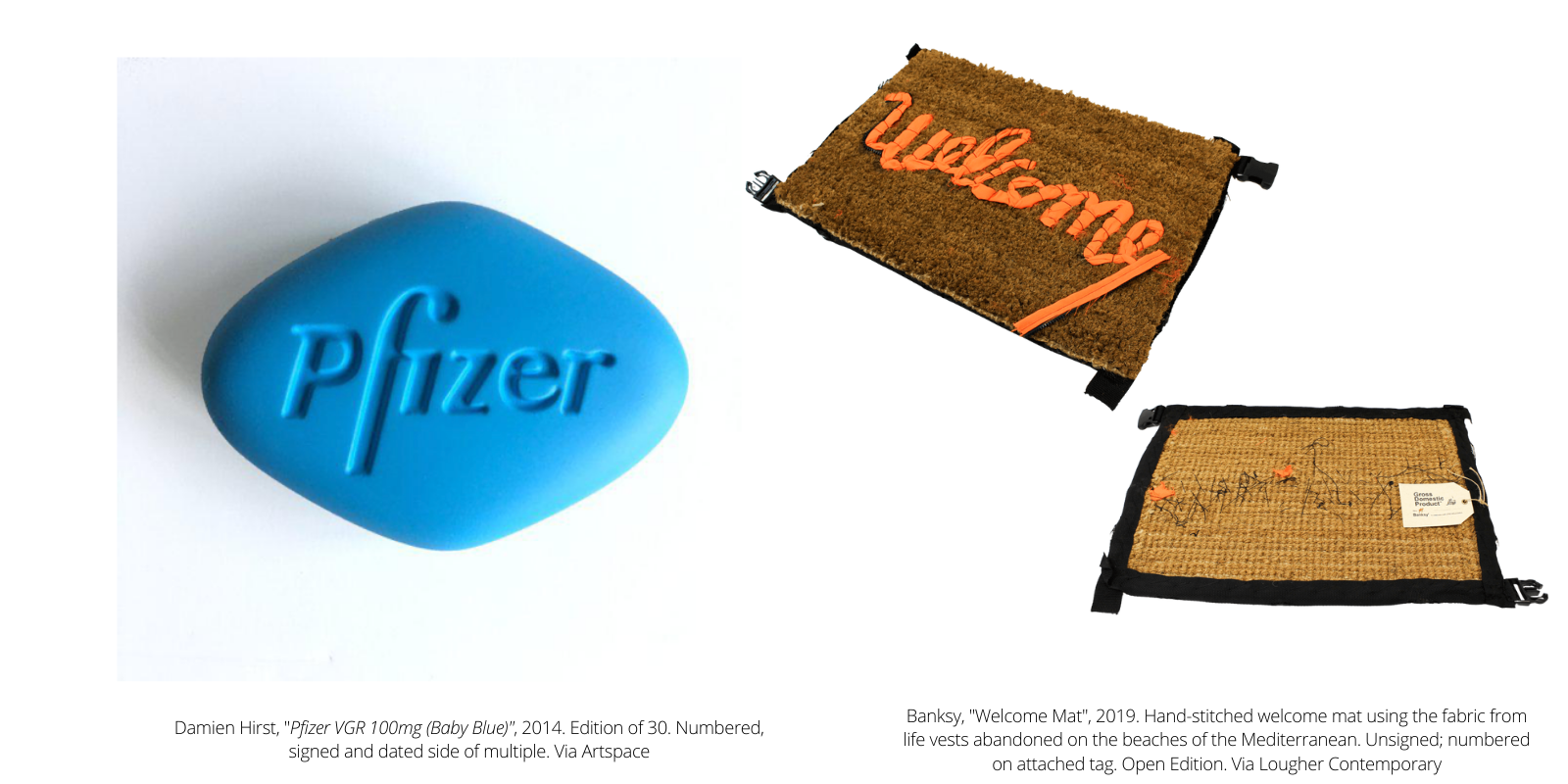 What is a ‘Multiple’ (aka Collectables)?

Multiples (also known as ‘Collectables’) are a series of identical art objects with a large (typically over 500) or even unlimited number of copies. ‘Multiples’ and ‘Collectables’ are two terms used to describe the same thing even if their popular connotation is different. For example, some art collectors associate the word ‘Collectables’ with toys, making it seem less worthy of describing Fine Art, therefore it is a term that most will therefore avoid using, opting for the term ‘Multiples’ instead. But whatever term you end up hearing or using, fear not! As we said, the words mean exactly the same thing, regardless of their connotations. The word itself is not what ultimately defines the value of a piece, and we’re here to tell you what it does… more on that below!

Multiples, much like any other artwork with several copies, carry a unique number that represents which copy number it is, and it’s ‘edition’ size. - Not sure what an ‘edition’ is? This is another term used when talking about prints, and we are going to explore it in the next article in this guide. It’s being published soon, so keep your eyes peeled! 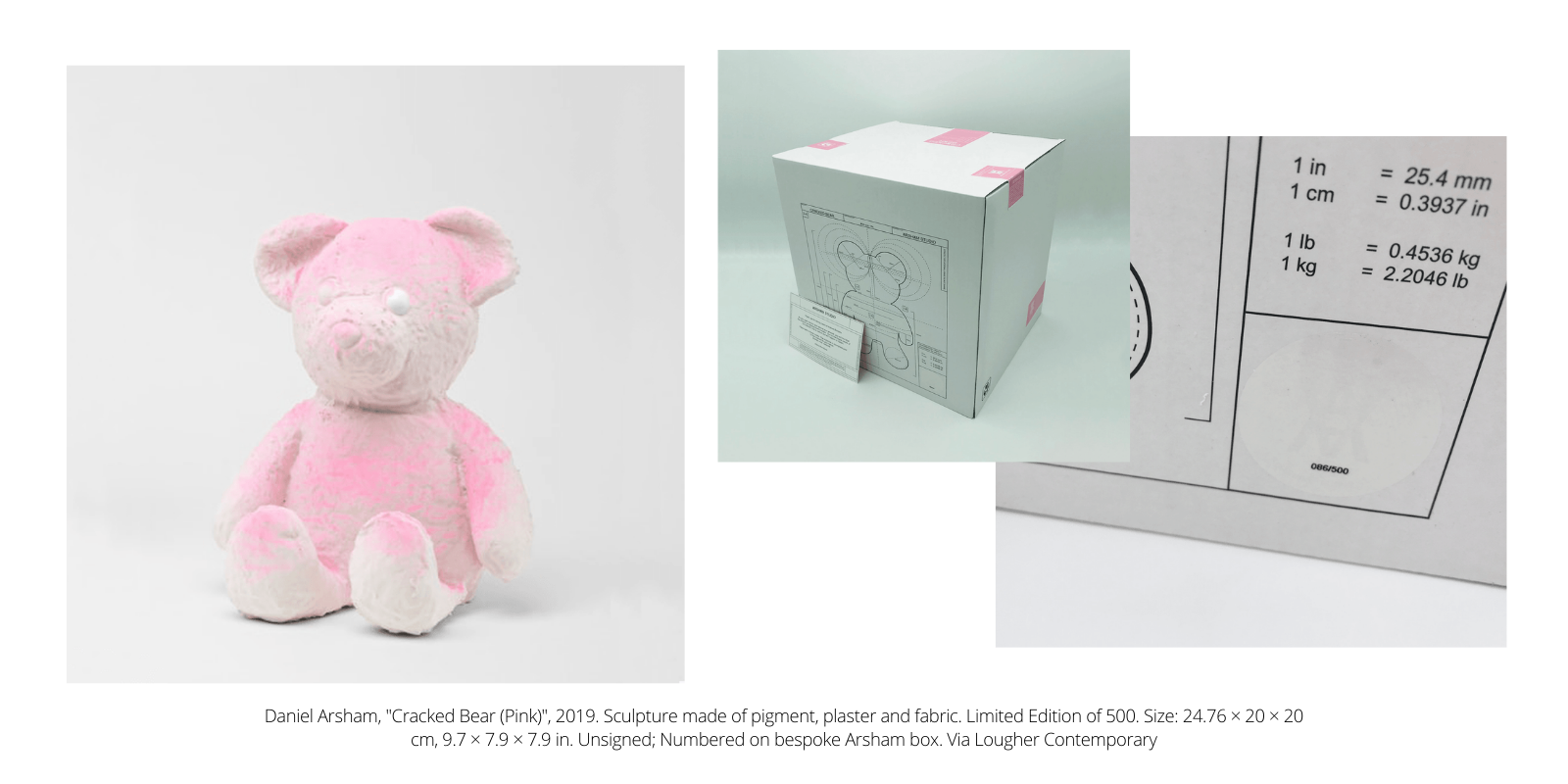 These numbers are extremely important for these kinds of artworks because they show how scarce a particular piece is, how sought after that particular artwork is (many collectors pay a premium for an artwork that is the first in the ‘edition’ for example) and both these elements ultimately influence  its value.

So...aren’t multiples just prints? I hear you ask… Well, technically, yes (because all prints are technically multiples of an original), but there are slight differences to spot in the way these terms are actually used in the art collecting world.

Firstly, multiples are usually defined by their three-dimensional medium (from plastic, to porcelain, to glass... all are typical mediums used for ‘Multiples’) whereas prints are solely sold as two-dimensional artworks (usually printed on paper). 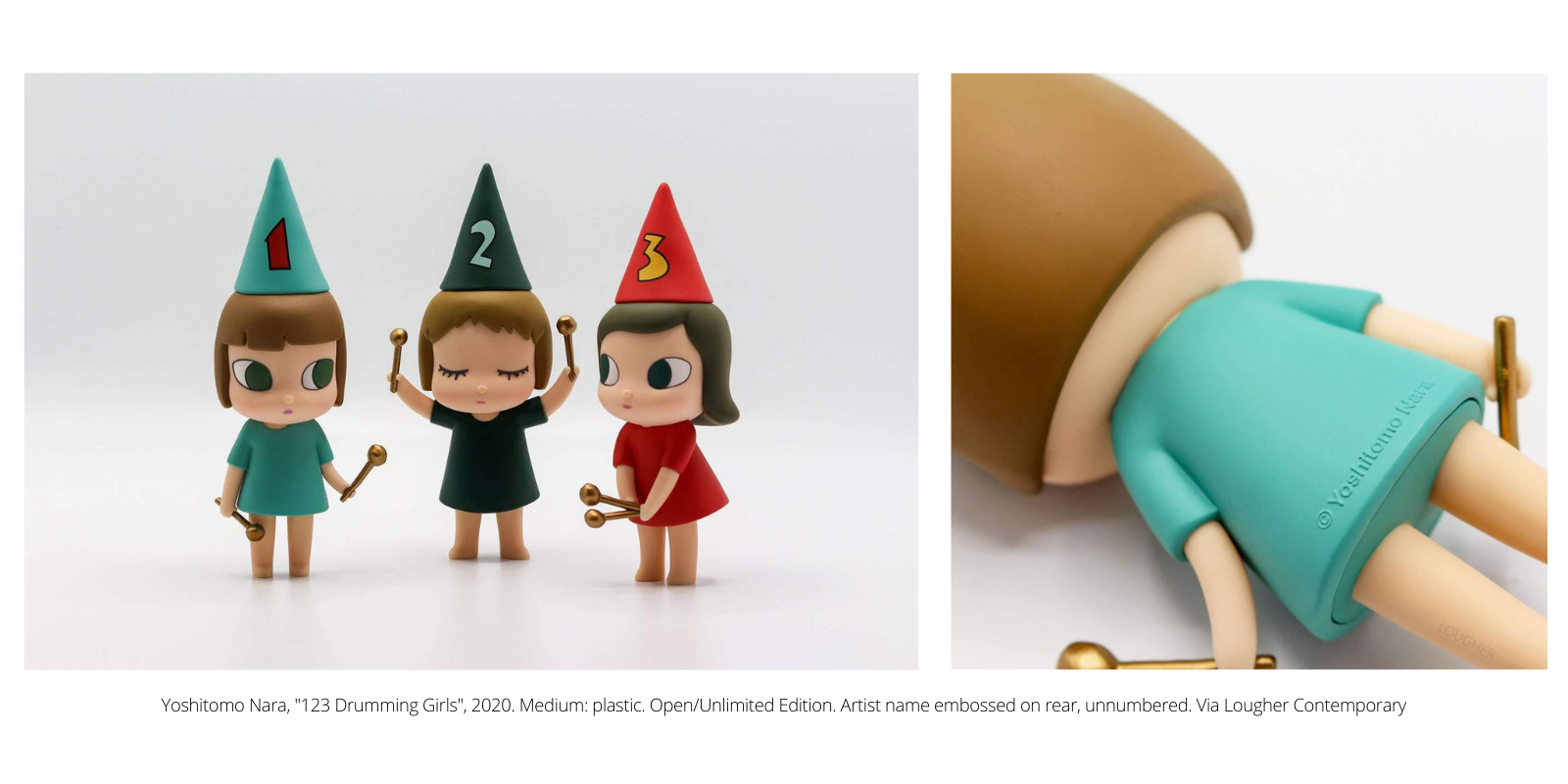 Secondly, multiples are mass-produced with the sole intention of selling. Don’t get us wrong here.. ‘prints’ are also often intended as a way for artists to monetise their works, but often ‘prints’ are produced with more intentions than solely for money. For example, artists often take as much deliberation over the process of creating a ‘print’ as they would in choosing any other medium; such as canvas for a painting or clay for a sculpture, because it may better fit with the concept the artwork is trying to convey, or even purely for its aesthetic purposes. However in multiples, the main motives for choosing a certain medium tends to be based on commercially-focused considerations firstly and foremostly. Why? Because the original artwork already fulfilled all the artist’s priorities around the ideas and the aesthetic choices they wanted to convey, so the ‘multiple’ model is simply used to monetise that image... which takes us to our final point...

‘Multiples’ are normally commissioned by the artist, but are often involved little, (if at all) in the production process compared to how involved they would be in the ‘Fine Art Prints’ printmaking process (which we discussed in the ‘prints’ guide). Despite these three key differences, you will still often see the two terms ‘prints’ and ‘multiples’ used interchangeably in the art world, but at least you now have the low-down on the main differences, so feel free to correct anybody when they're wrong… if you're feeling up to it! 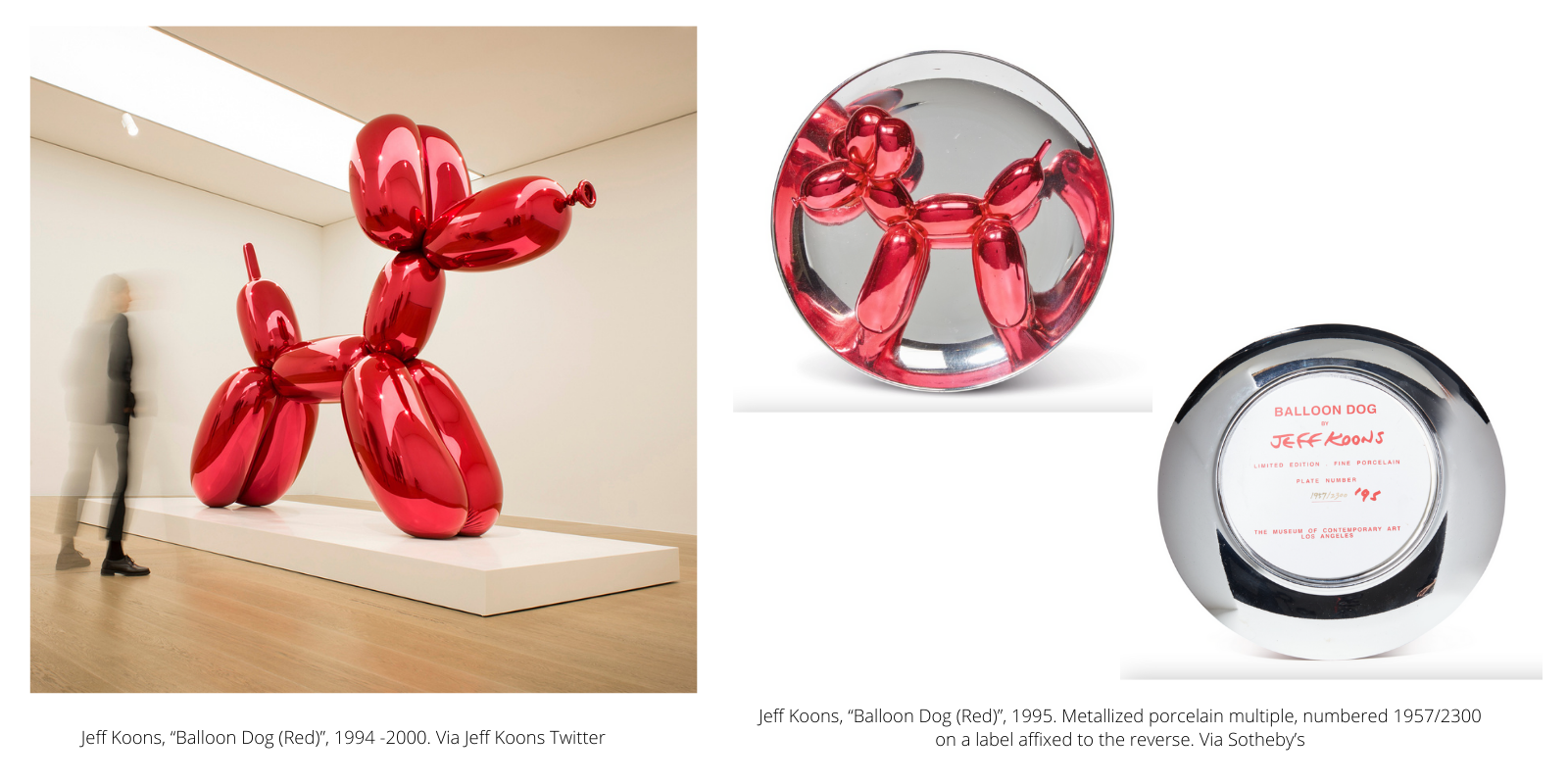 Jeff Koons’ porcelain Balloon Dog’s replica series is a perfect example of what a multiple is! As the original Balloon Dog is pretty large (121×143×45 in.) and very pricey (sold for $58.4 million in 2013) most would see it as unattainable to collect. As a result, savvy Koons decided to reproduce 2,300 replicas (10.51x10.51x4.02 in) of the original Balloon Dog, but with a much more affordable price tag ($15,000). By using ‘multiples’, he makes his art more accessible to a wider pool of  art collectors, but he also found a clever way to better monetise the unique piece: create the work once, re-package it in a more widely sellable format, then mass-produce it! Clever huh?! Why didn't we think of that…! 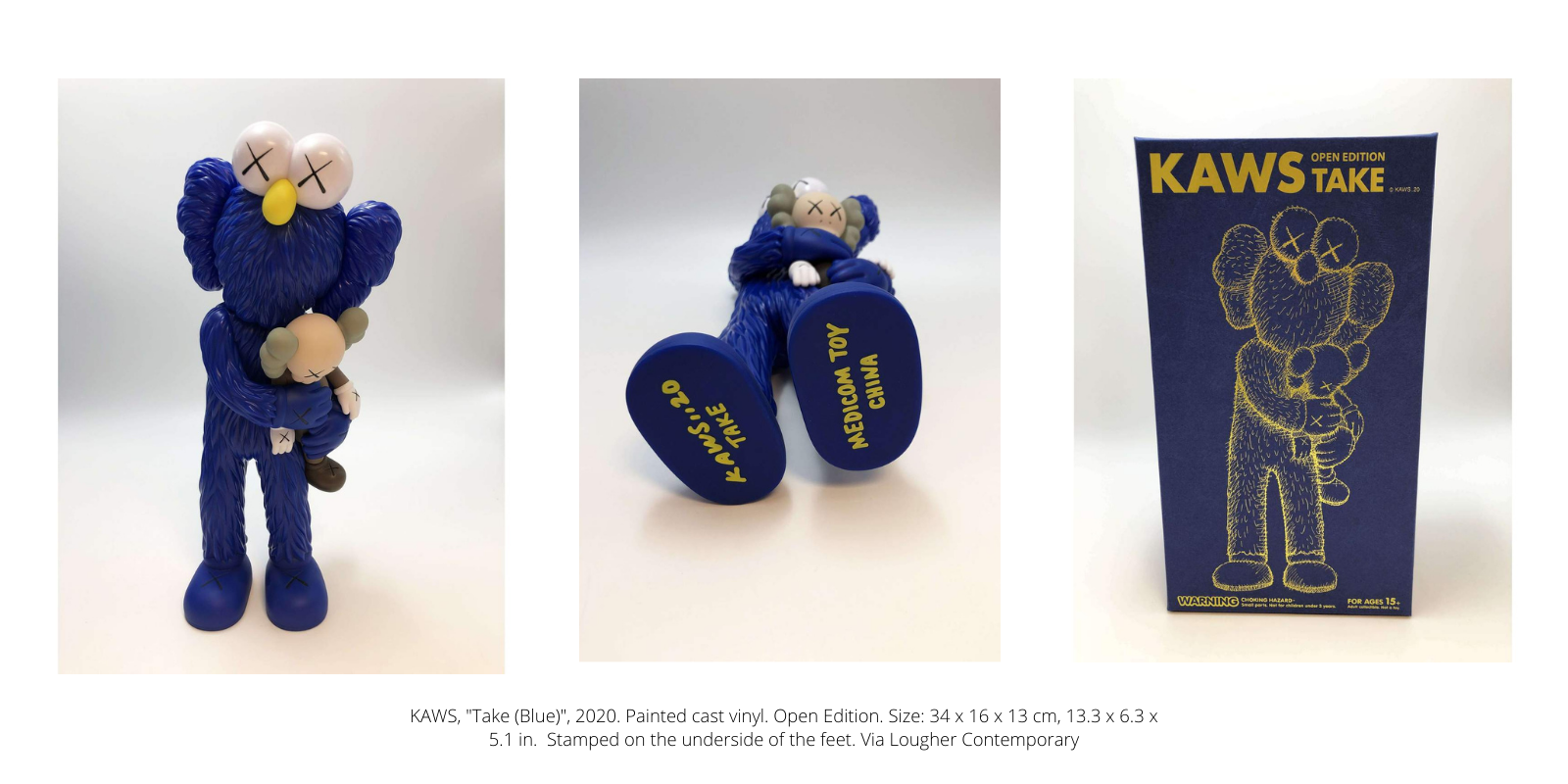 As we said, whatever term you choose to use, ‘Multiple’ or ‘Collectable’, both are technically correct when discussing these kinds of artworks! Sometimes the artist will define the term they prefer to use such as KAWS, who opts for ‘Collectables’ but that might be something to do with the subject matter he’s chosen. KAWS is well recognised for his large Companion sculptures that are often then released in very limited editions as ‘Collectable Toys’. These figurines are sold for thousands too, but it is important to remind ourselves that the main aim of these ‘Multiple’ (aka ‘Collectable’) releases is to create a more accessible art market where there is an art piece for every budget.

At Artscapy, we believe that art should be accessible for everyone, regardless of your budget, background or knowledge. We are happy to support the concept of multiples, but do remember that if they are mass-produced and no longer scarce, you might need to accept that you're buying them for your own enjoyment to own and look at in your home, rather than for a big financial gain!

We hope this guide helped make these complex terms clearer for you! And we will see you in our following article where we will explain what an ‘edition’ is… coming out very soon!