Welcome back to our collecting series! Over the last few weeks we’ve been explaining the main differences between prints, multiples, editions, and offset prints. However, there is more to all these terms than meets the eye. This time we’re delving into the specificities of ‘editions’, as there are so many technical terms associated with them. In order to be able to understand the true value of an edition, it is useful to become familiar with all these terms and their meanings. So, let’s get right to it!

What is an edition?

As we explained in one of our previous articles, an ‘edition’ is the term used when describing the complete collection of   ‘print’ or ‘multiple’ artworks created within a single  given series. Each individual artwork  (whether a print, sculpture, photograph, or video) within the series is often referred to as an ‘edition’, to emphasise that it is part of a collection of identical artworks (additional copies) which make up the series.

Are there different types of editions?

Yes, there are. First of all, not all editions are created following the same technique. A brief shortlist of various techniques used include  photography, printmaking, and cast sculpture.

So yes, printmaking itself can be done in many different ways! (Psst, stay tuned to read a full article on printmaking - coming soon). This means there is a full range of different edition types that you can buy. If you are a fan of three dimensional objects and disguise paperworks, do not worry - the art market has got it all for you! And best of all, collecting editions can often fit most budgets. 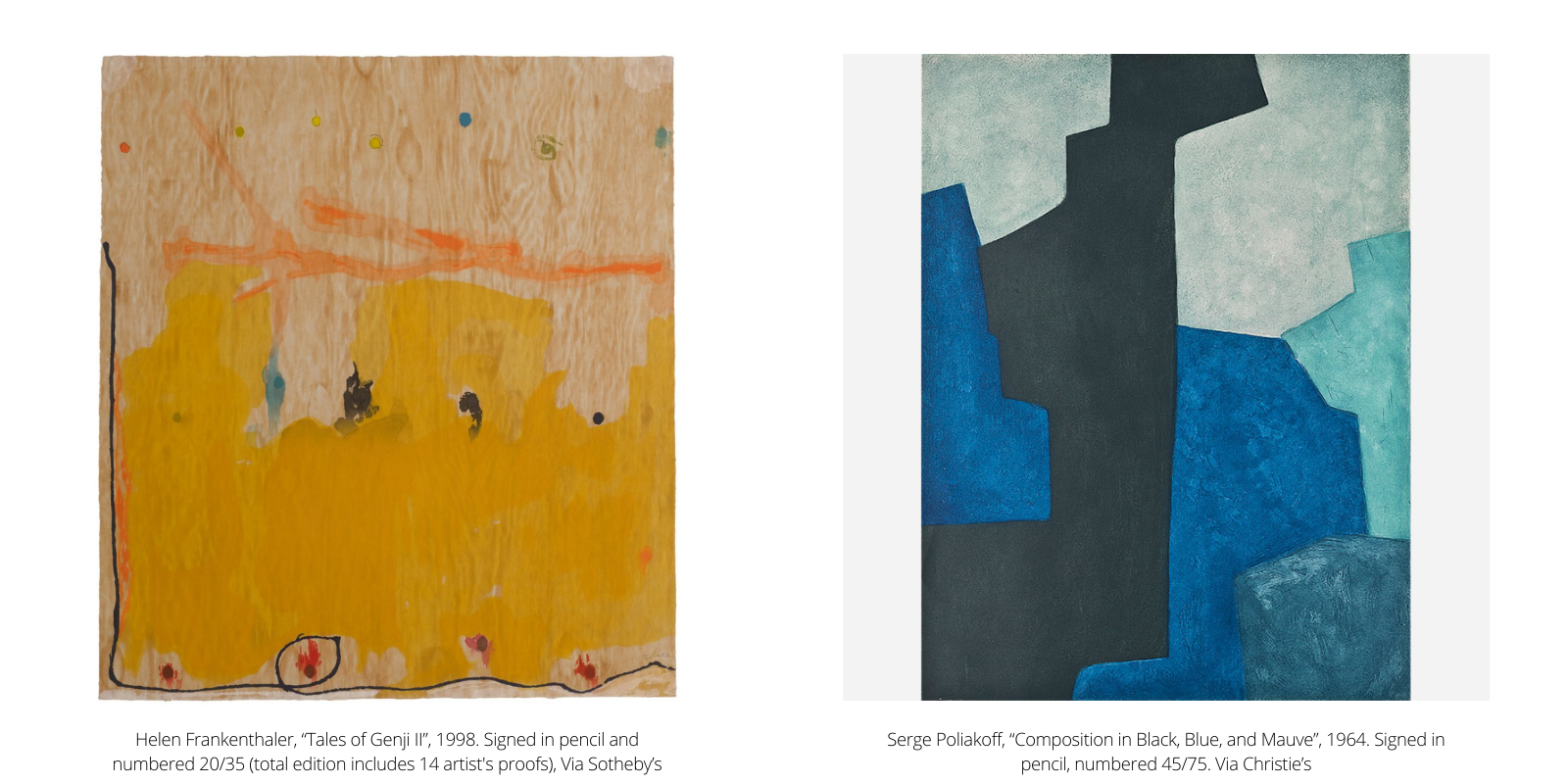 You have probably read these terms a thousand times, but might still have no idea on the differences or the different variations of these terms… Well, don't worry! It is pretty straightforward! Editions are described as ‘limited’ or ‘unlimited’ (also known as ‘closed’ or ‘open’), depending on whether the number of copies created is defined by the artist as ‘limited (and therefore pre-defined and fixed), or unlimited (and therefore undefined with scope to make more), respectively. It's useful to also know that limited editions are normally numbered. So if, for example, you find the mark ‘1/25’ on a print, it means that the particular print you are looking at was the first print of a ‘limited’ set of 25. If it did not have these markings however, it's likely you’d be looking at an ‘unlimited’ print.

Can a limited edition ever be extended?

Technically yes...but it very rarely happens. Artists, galleries, or artist estates sometimes decide to extend a limited edition, and they do this by labeling the following editions as a ‘second edition’, ‘third edition’, and so on. They would often only be motivated to do this if there was a big commercial incentive to do so, (for example the image from the first edition becoming ‘iconic’ and thus in high demand).

But in the interest of buying a piece that best holds its value over time we would suggest that you always make sure that the piece you are buying is from a first edition. However, this is a questionable practice, since it can negatively affect the value of the pieces in the first edition, making collectors who purchased this first edition unhappy, and hurting the artist’s credibility. 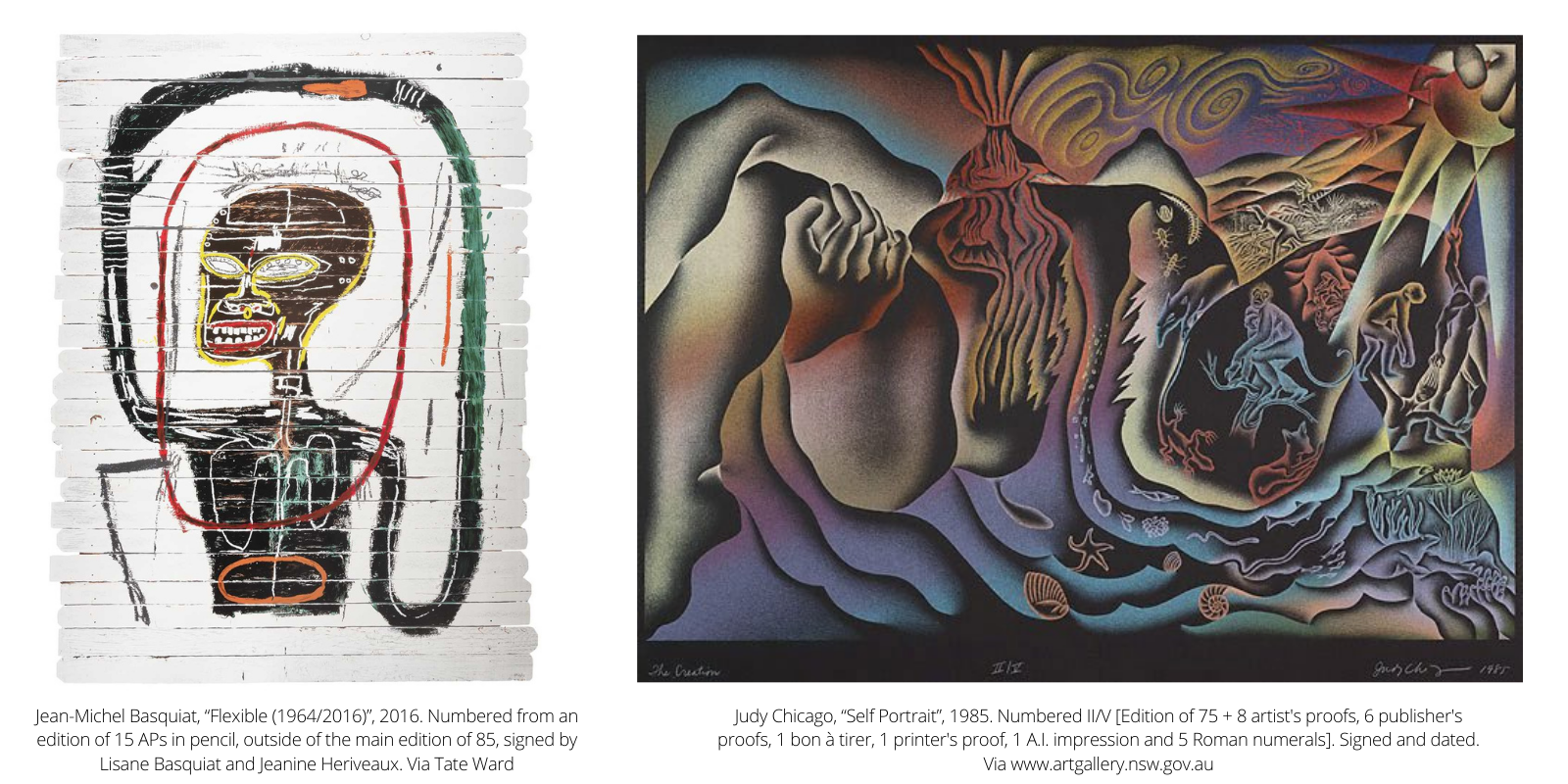 Editions are often signed by the artist. However, there are times when editions are produced after the artist’s death by their estate (posthumous editions), in which case they will not be signed.

What are print ‘proofs’?

A ‘proof’ is technically a ‘print’ (in terms of the process made to create it) but it’s worth noting that a ‘proof’ serves a functional purpose within artists’ creative process, and often is not made with the intention of being sold (as is the case with a print that forms part of an edition as discussed above, for example).

A ‘proof’  is essentially the ‘test’ or ‘sample’ that the artist prints during their printmaking process  in order to trial, refine and finalise their technique. These trials will lead to the ‘master print’, from which they will create the rest of their copies.

You may think that because they are used at this stage of the process, these  ‘proofs’ are seen as less valuable than limited edition prints, as they are not the ‘final’ version. However, the term ‘proof’ simply just means the artist did not envision these as ‘final’ art pieces and so they are not ‘officially’ part of a series. But this being said, they are still seen by many in the artworld as special, and often hold more value than the ‘official’ edition pieces themselves! This is because of their uniqueness and scarcity... and perhaps just how close they were to the artists’ bare hands. 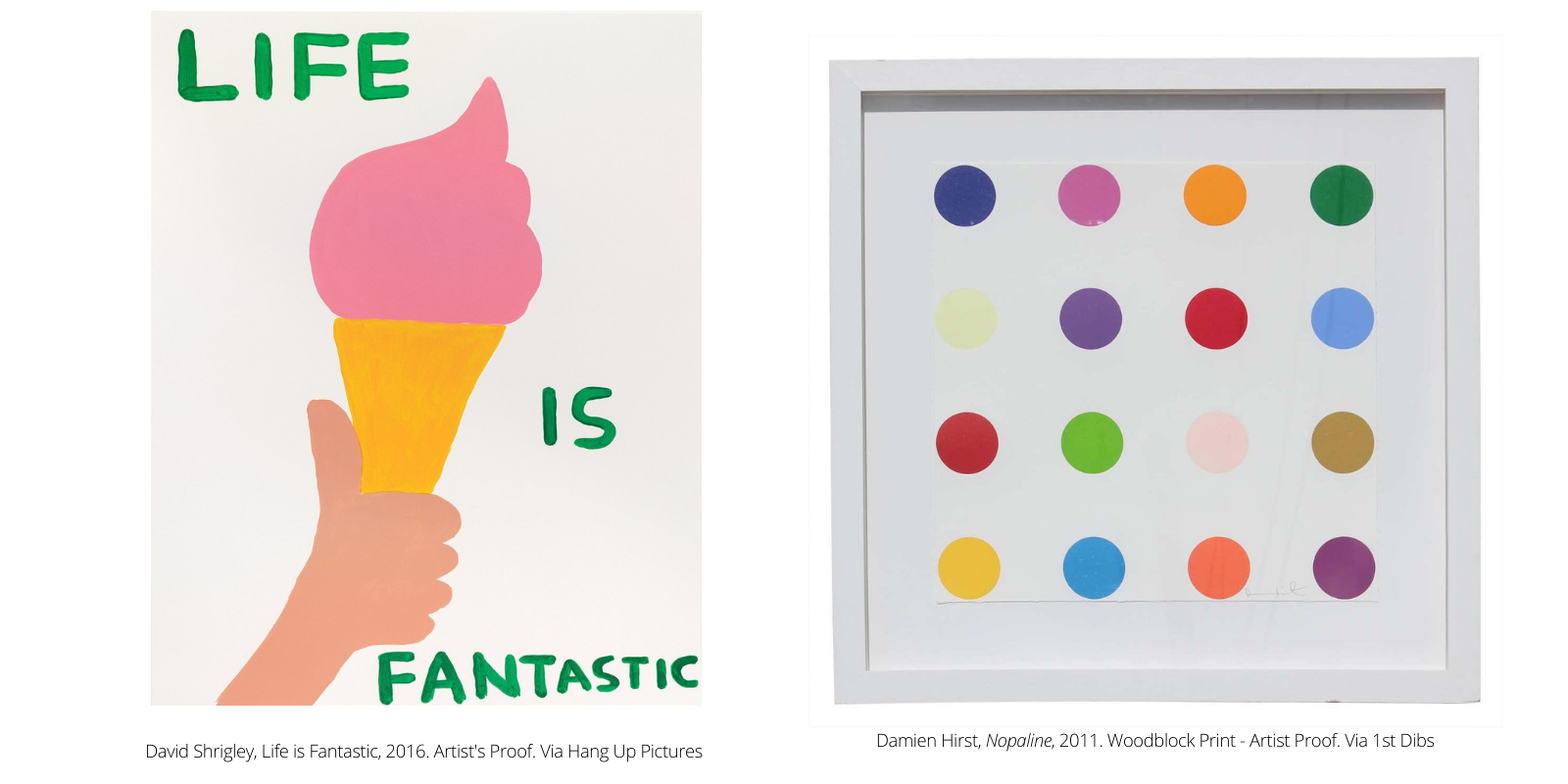 Are there different types of print ‘proofs’?

There are tons of different ones - AP, EA, PP, RTP, BAT, CP, TP, HC, you name it! As you can see, the art market loves acronyms (especially in French!), but what on Earth do all these mean?! Let’s clear these up...

The first one we want to clear the meaning up is RTP, which means ‘Ready to Print’ (or BAT in French, meaning ‘Bon à Tirer’). This is a mark found on the first print (aka ‘master’ print) to show that it has been approved by the artist and meets their standards. As mentioned above in the ‘proofs’ section, the artist usually does a lot of sample prints for quality testing and the one that is officially accepted by the artist is the one that receives the ‘RTP/BAT’. This ‘master’ print provides an ‘approved’ standard version, which helps to guide the printer throughout the production process.

AP means Artist’s Proof (or EA in French, meaning ‘Épreuve d'Artiste’) and it’s a mark found on prints that were kept by the artists for their personal collections, (or simply as a record). They may be more valuable than regular prints, because they were owned by the artist who may even have written notes on them, making them truly unique (as it allows them to carry something of the artists’ personality within them through this ownership and these markings). PP means Printer’s Proof and is a mark found in prints gifted to the printer working on the creation of an edition. 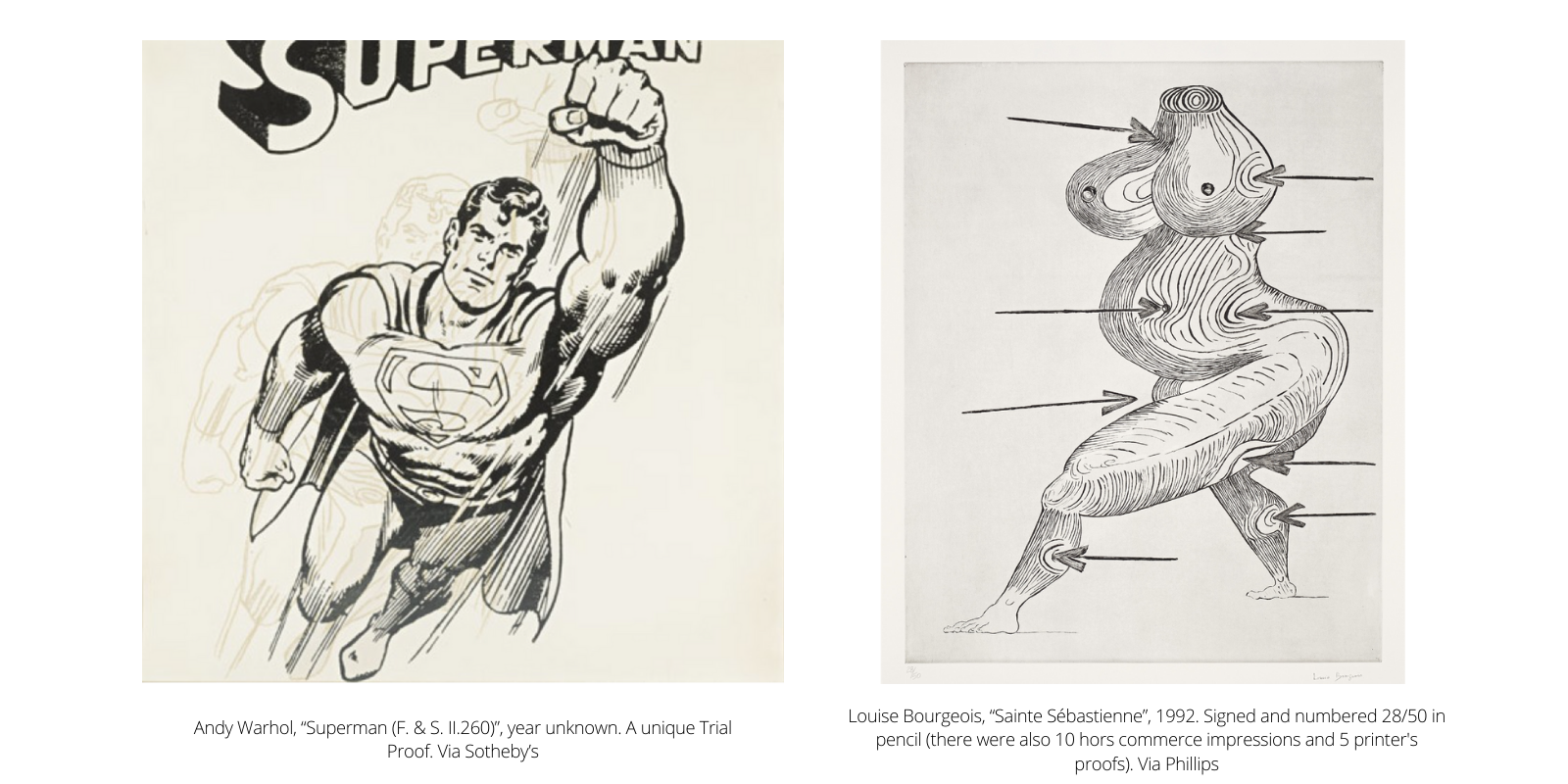 CP means Colour Proof and is a print used specifically to test the colours that best convey the artist’s vision for the edition. Since it is a step towards achieving that final ‘master’ print, this proof normally precedes the RTP/BAT.

TP, or Trial Proof, is created so that an artist can experiment, and work on small refinements to perfect the print before they arrive at the final RTP/BAT. These may be slightly different from the RTP/BAT and can be very valuable to collectors who crave some subtle unique nuances in a print.

Last but not least, there is HC, or Hors Commerce in French (meaning ‘out of trade’), which is a kind of ‘sample’ print meant to be used just for promotional matters (eg., for the artist to showcase their work to galleries or other art dealers). 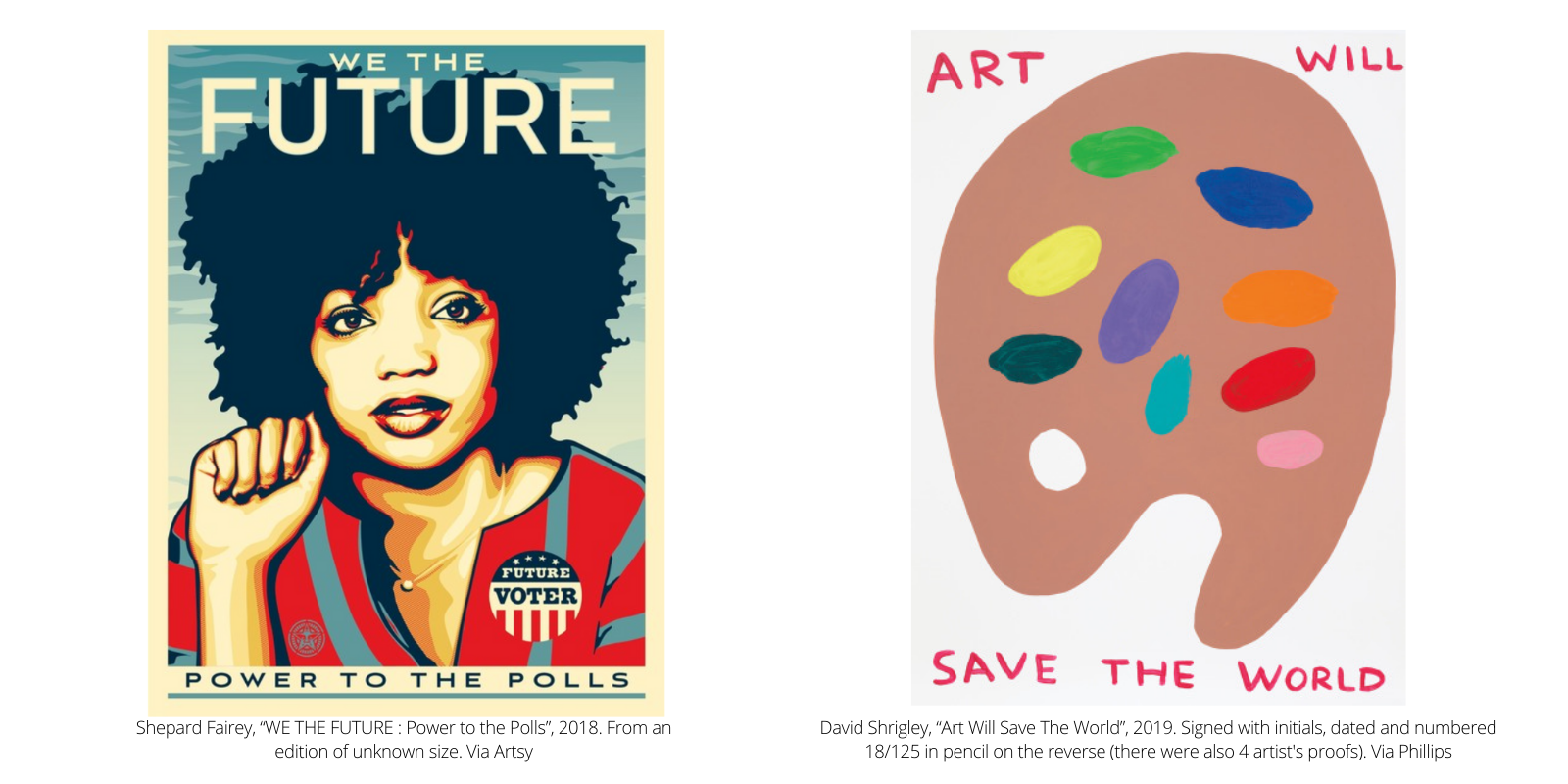 We hope this FAQ has helped make a lot of the vocabulary around editions clearer for you, and helps give you more confidence when navigating the art market and making informed collecting choices that are right for you.

At the end of the day, your collecting journey is your own, but knowing these technicalities allow you to ask the right questions to sellers when you feel the market value of a piece isn’t in line with its characteristics, so you feel in control of any sales negotiation

But do remember that part of the collecting journey is also about building your own particular eye, and not being afraid to take some risks when your gut tells you to! The art that you feel most drawn to will ultimately be a reflection of your own personal preferences, and we encourage you to embrace that!