We are delighted to introduce our Artscapers to one of our very own art advisors: Sarah Belden. Sarah Belden has worked professionally within the art world since 1999 in several diverse capacities, as a dealer, curator, gallerist and now art advisor at SBFA.  In addition to curating many independent projects over the years, she worked at Christie's Auction house in the Post-War and Contemporary department and at numerous primary and secondary art market galleries in New York City.  Sarah Belden also worked as private collections manager for the Emily and Jerry Spiegel Collection in New York and has consulted on numerous projects in the U.S. and Europe, In 2006 she opened her own gallery in Berlin, representing many emerging artists who have now gone on to major acclaim.

In 2017 Sarah Belden launched Unique Multiples, an online platform for Curated Artists Editions, certified on the blockchain.  She was one of the first in the art world to use this technology for Certificates of Authenticity and is now curating an upcoming exhibition featuring NFTs with several well established artists in London this Fall.  Sarah Belden Art Advisory has just relocated to Milan, Italy and has just started offering their bespoke VIP tours to all art fairs, including Art Basel, the first fair SBFA visited post-COVID.

Sarah caught up with our founders Emilia and Alex at Art Basel 2021 last month, and she has shared her insights on both the show itself, notable artists, the highly anticipated curated sections such as Unlimited and much more.  If you couldn’t make it to Basel this year you can read all about it here on Artscapy! 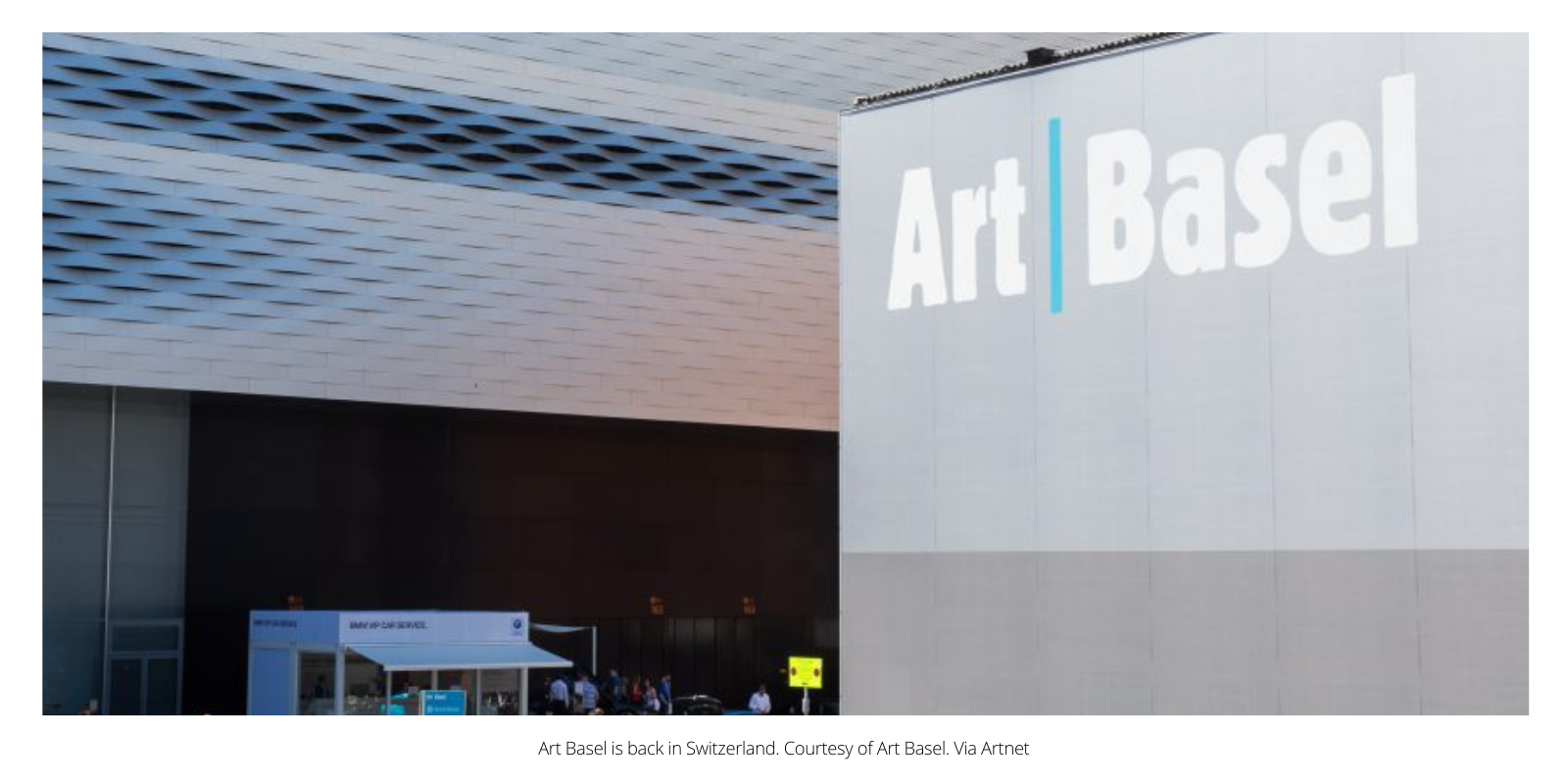 Art Basel, known as the most influential and significant contemporary art fair in the world, is back after a two year hiatus due to COVID-19. Despite missing a few major American collectors this year, the fair reported vigorous sales and exhibited outstanding presentations marking a highly successful 2021 edition that featured 272 leading galleries from across the globe, exhibiting the highest quality work in all media and rare historical masterpieces alongside new works by today's best emerging artists. The fair did not require vaccination for entry, but guests had to provide either a negative test or their vaccination record at the ‘COVID Certification Center,’ a temporary tent set up outside the fair. After showing my European Green pass (a QR code which, FYI you must keep on hand at all times, even just to get a table at a restaurant), we promptly had a black ribbon clamped on our wrist that we had to wear for the duration of the fair. You could also grab a quick swab/PCR test on your way in or out, which my clients did before flying back to the UK, so despite all the new restrictions, the fair organizers made it quite easy and convenient for fair-goers to confidently attend the art world’s favorite Swiss fair in a safe and regulated environment. Of course we all had to wear the obligatory face masks, which made carrying on muffled discussions about conceptual art all the more difficult, however with a capped capacity of 20 percent less than in the past, the fair felt less claustrophobic than usual, yet still lively with many fair-goers thrilled to be back, see art IRL and reunite with one another in such a rarified social setting. 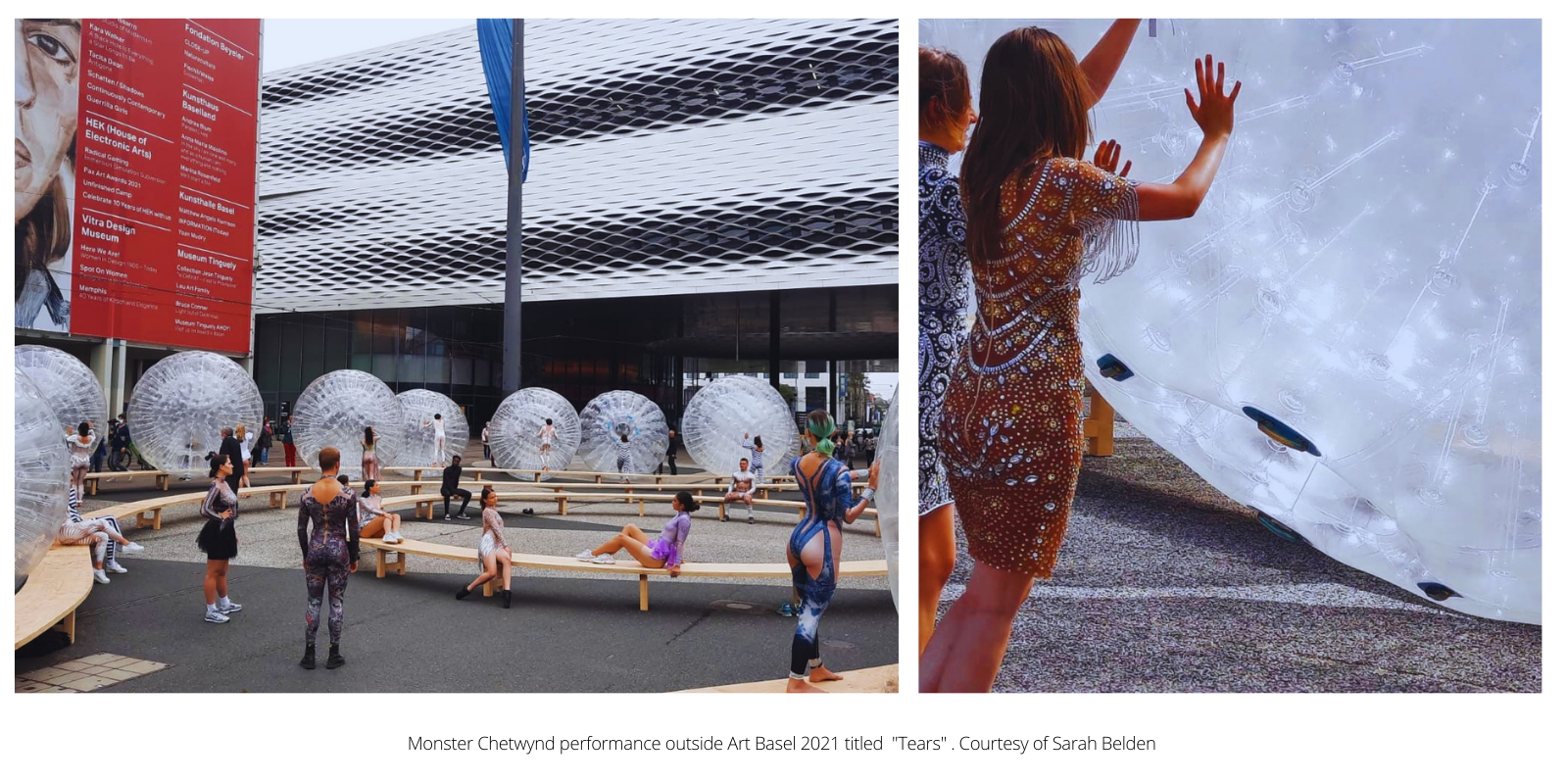 There was a great energy and mood throughout the fair with all the usual suspects in tow, from auction house veteran, Amy Cappellazzo and Frieze Global Director Victoria Sidall power lunching in the collectors lounge, to Jeffery Deitch who seemed to be glued to his booth for the entirety of the fair, and omnipresent curator Hans Ulrich Obrist roaming around in one of his funky printed suits. I also saw David Zwirner chatting over coffee on a bench outside his booth and Iwan Wirth, of mega gallery Hauser & Wirth who declared “Art Basel is back in full force!”  There were no “ghost booths” like those at Art Basel, Hong Kong. In Basel, the gallerists themselves were present, in the flesh they all seemed enthusiastic about how the fair went. Thaddaeus Ropac, owner of Galerie Thaddaeus Ropac, remarked, “It's astonishing and amazing that the success of this edition lives mainly from European collectors and that Europe alone can carry such an important art fair like this. 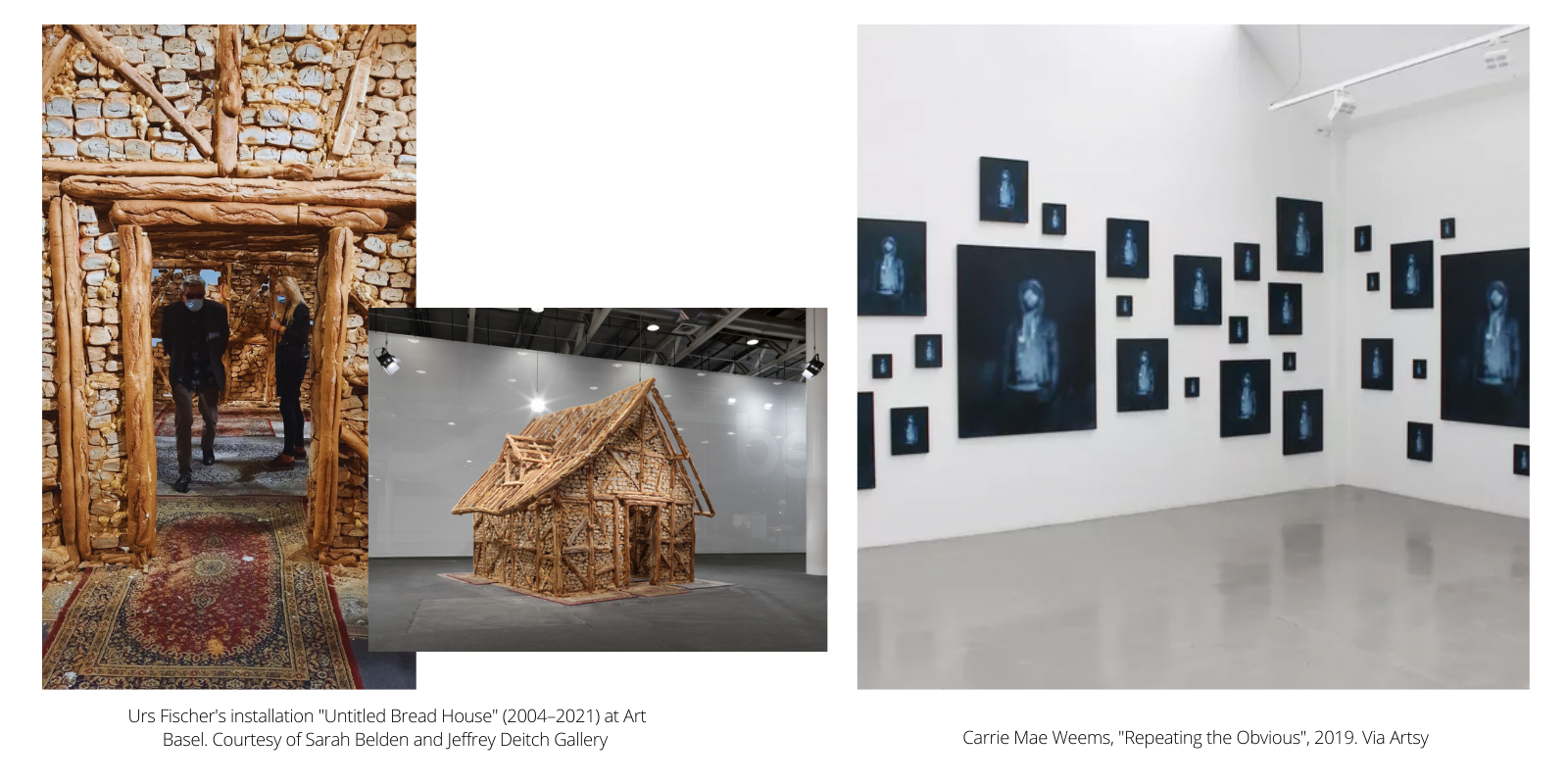 Unlimited was curated for the first time by Giovanni Carmine, Director of the Kunst Halle Sankt Gallen. This massive, Biennale-scale presentation included a vast and diverse selection of expansive installations, monumental wall paintings, photographic series and video projections. One of my favourite projects was presented by Jeffrey Deitch, the LA based gallery, who brought the iconic Urs Fischer's installation Untitled Bread House (2004–2021). This Hansel and Gretel house was constructed with actual loaves of bread, which, in this case, happened to be fresh bread from Zurich's oldest bakery (where the artist is from). The work was on offer for 3 Million USD. Other large-scale projects of note were Carrie Mae Weems Repeating the Obvious, 2019, presented by Jack Shainman Gallery, NYC. Curator Giovanni Carmine stated “Carrie Mae Weems is an incredible image-maker and one of the most important living American artists. This installation will confront the viewer with the Black Lives Matter movement.” The work consists of multiple images of an anonymous person wearing a hoodie, repeated in varying sizes as one monumental installation, installed ‘salon style.’ The effect was powerful. 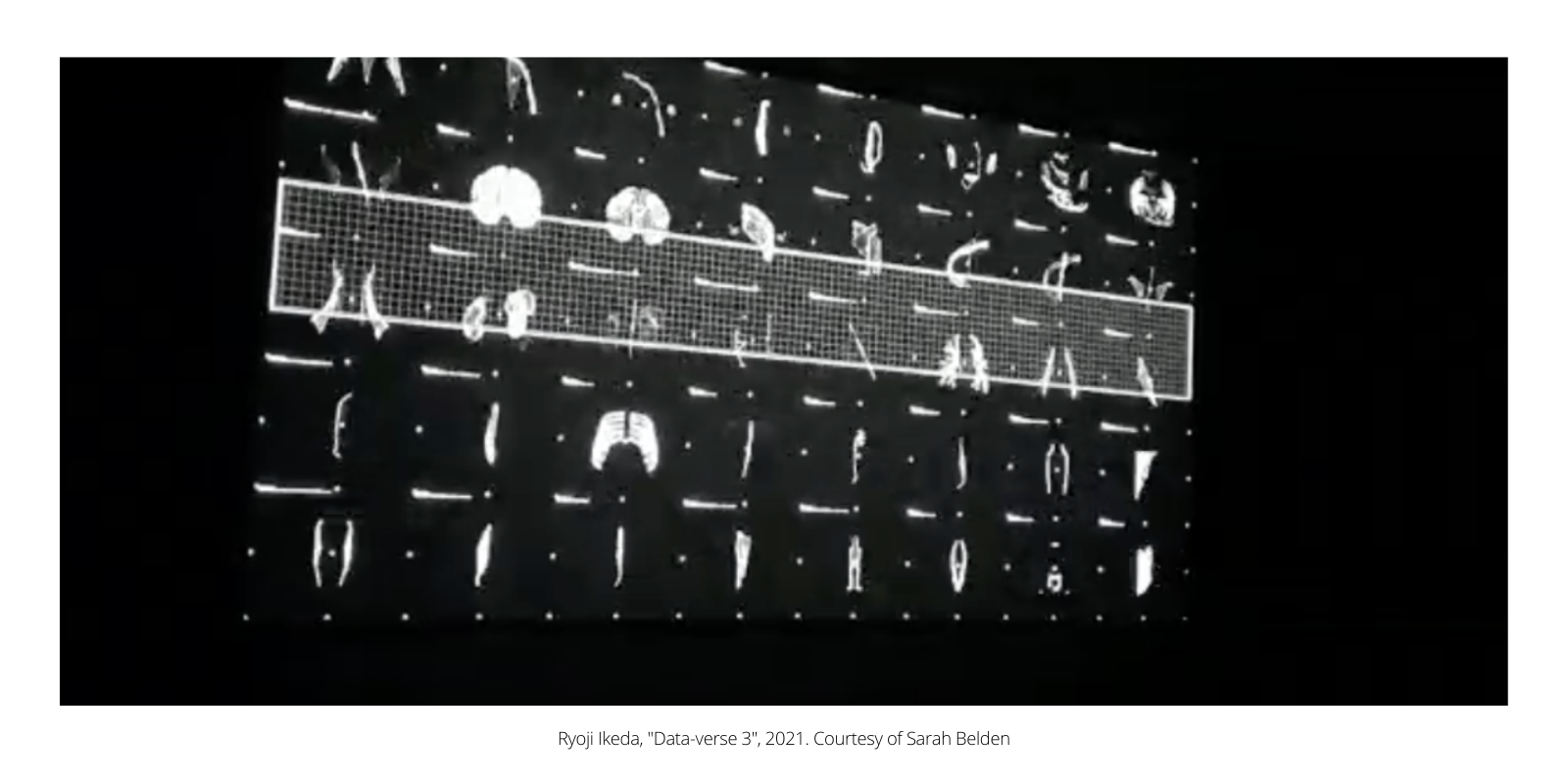 Another work I can't get out of my head is Japanese artist Ryoji Ikeda’s Data-verse 3, (2021), presented by Almine Rech, Paris. For this work, Ikeda used sets of data taken from many different sources, whose scope ranged from health issues to ecological issues. This dynamic and immersive audiovisual installation, highlights connections between technology and nature and makes the invisible, microscopical but crucial elements of our universe and existence observable and palpable. Carmine states that, “this monumental video projection, transports you into a micro and macro cosmos at the same time…like you have been beamed into The Matrix.” 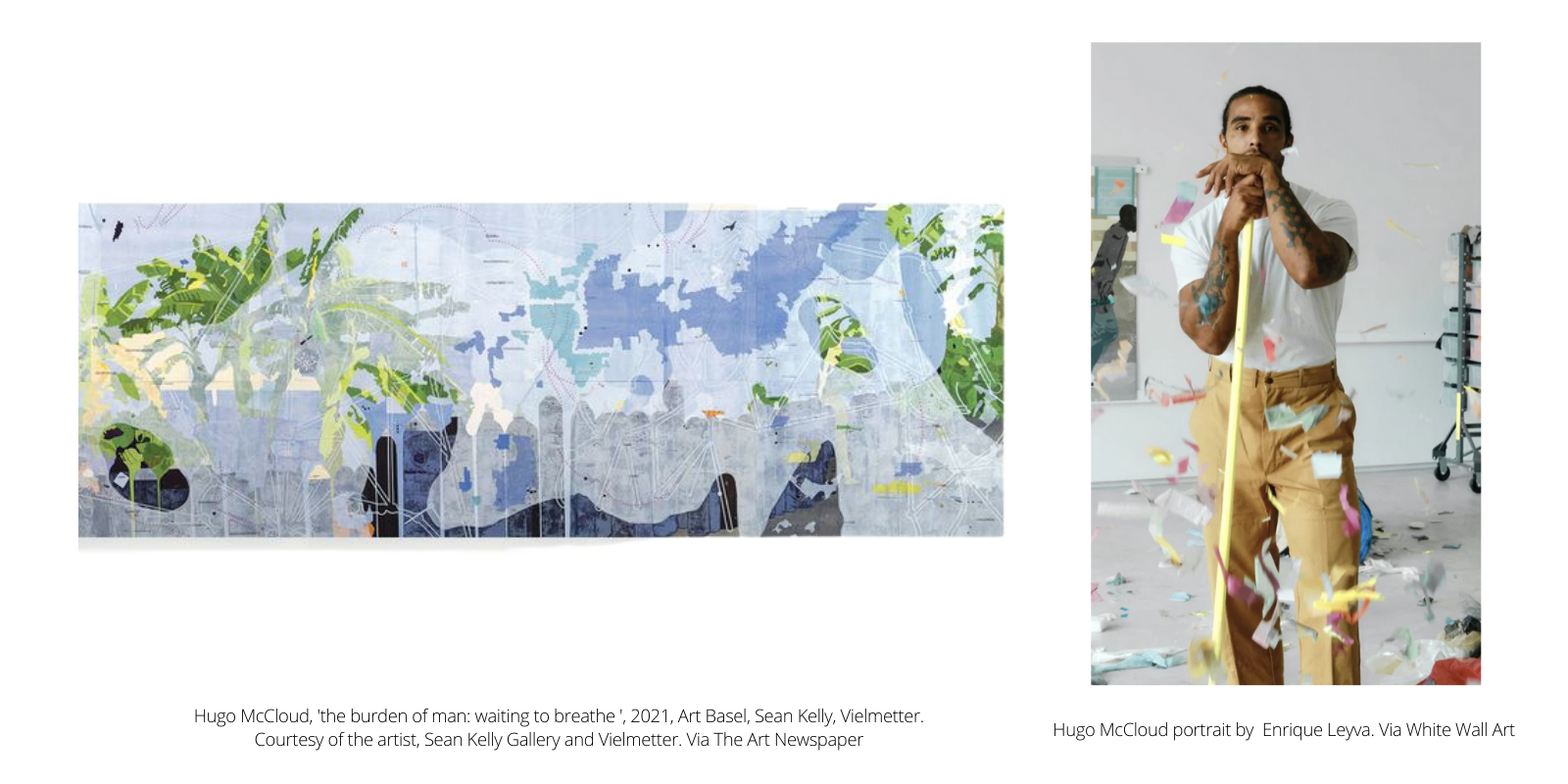 The last artist of note for me at Untitled was Hugo Mccloud, (Born 1980, based in NY). McCloud is one of the most prolific young artists working today, he is self-taught with a background in industrial design and his major new work, The Burden of Man: waiting to breathe, presented by Sean Kelly Gallery, is a massive oasis of blue made of hundreds of single use plastic bags on panel. The work references the countless social, economical and political upheavals we live with at the moment. McCloud says of this work, “We are all waiting to breathe again. We are all living in a space of hope.” This was a poetic, monumental and uplifting work. Hugo McCloud is one to watch. 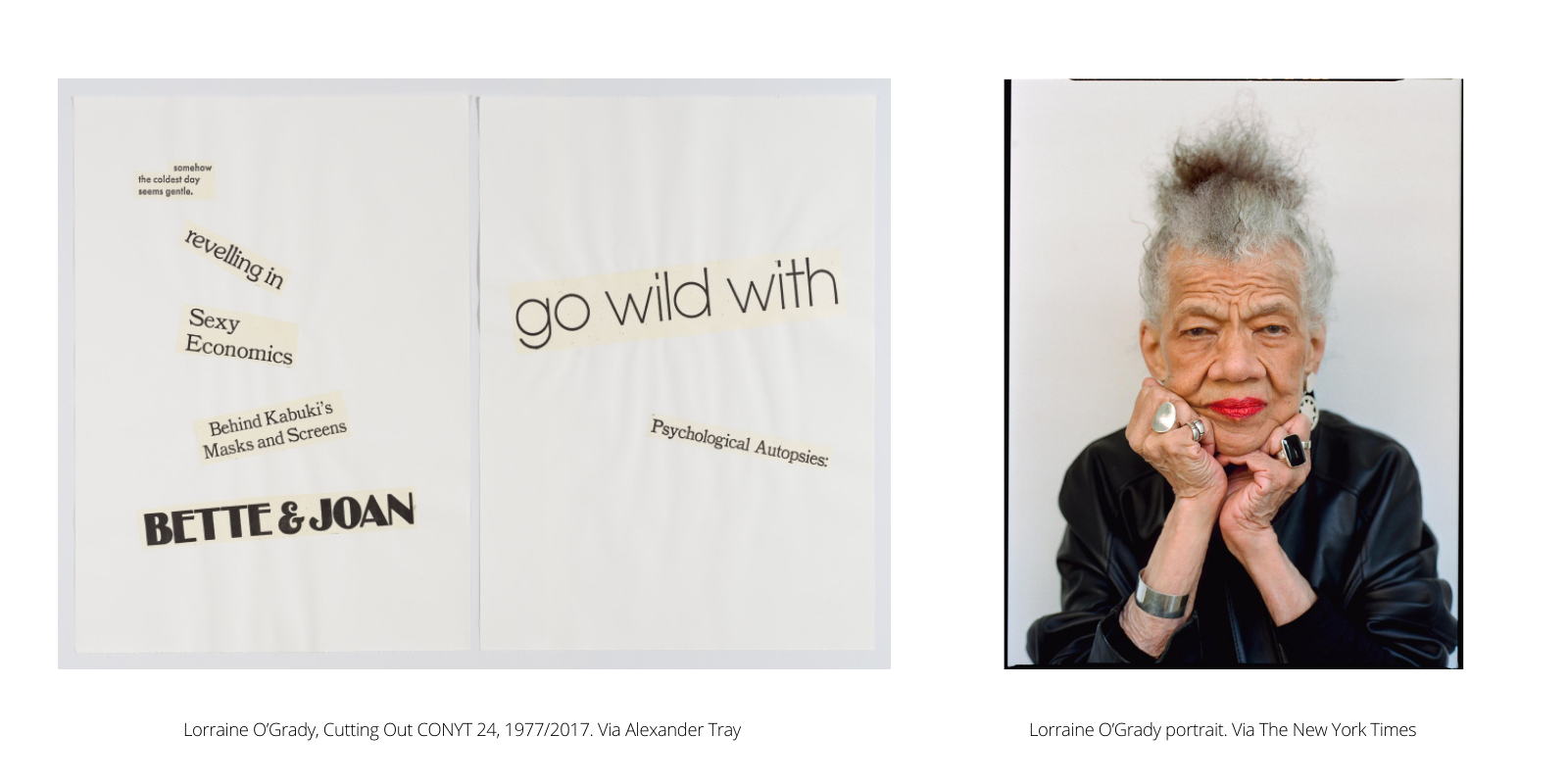 Another artist I must mention (because I am in complete awe of her practice, her history and her fascinating personae), is American artist Loraine O’Grady (Born 1934, Boston, MA), presented in a solo booth in the Editions Section by Berlin-based Publisher René Schmitt, who has an impeccably curated selection of editions, books, and works on paper.  An active voice in the feminist art movement of 1970s New York, Lorraine O’Grady, the daughter of Jamaican immigrants, studied at Wellesley College, worked as an intelligence analyst for what is now the NSA, speaks 14 languages, and was a Rock music critic. O’Grady works in performance, photo installation, video, and photomontage, exploring issues of gender, diaspora, identity, and aesthetics. She was known for her guerrilla performances in New York’s downtown art scene, where she dressed up as a beauty queen and invaded art openings wearing a gown and a cape made of hundreds of white gloves.  She also creates works on paper using text, cut out from The New York Times, rearranging phrases to subvert the original meanings. O’Grady has had several important institutional exhibitions, but is clearly yet another black, female artist who has fallen under the radar. 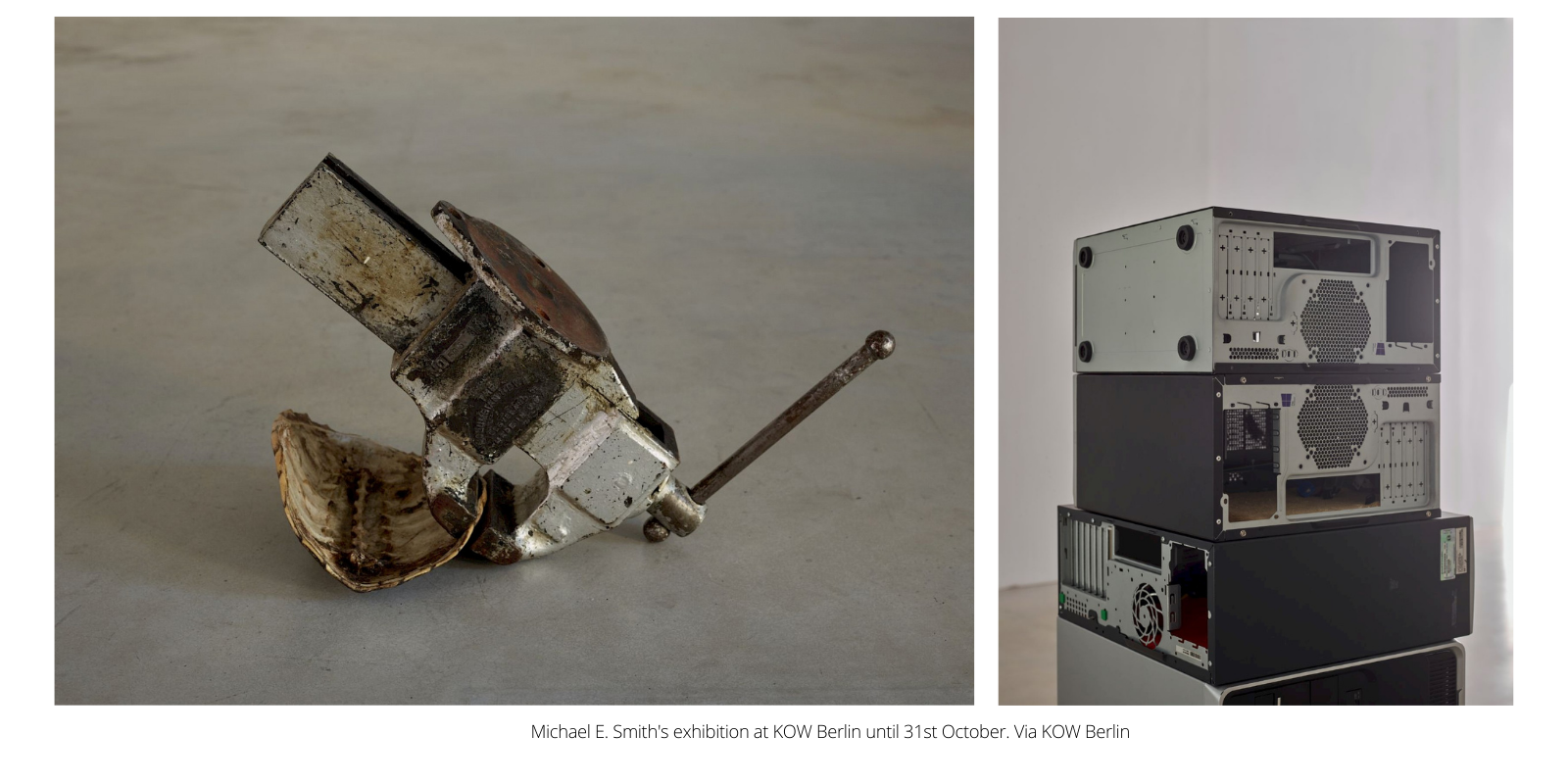 Another artist who I felt deserves mentioning here is Detroit-based conceptual artist Michael E. Smith (b. 1977), who deftly animates and transforms everyday objects through careful manipulations and arrangements. Subtle juxtapositions, removals, misuses, and degradations render even the most common things unfamiliar. Berlin-based KOW gallery, focussed on cutting edge conceptual art, presented several strong pieces by Michael E. Smith in their booth. Owner and curator Raphael Oberhuber shared the story of Klaus Biesenbach, director of MoMA P.S.1, walking into the gallery in Berlin one day and basically taking the entire installation to New York to put on view at the MoMA in 2018. Smith is an important American voice and has been included in many other major institutional exhibitions since. 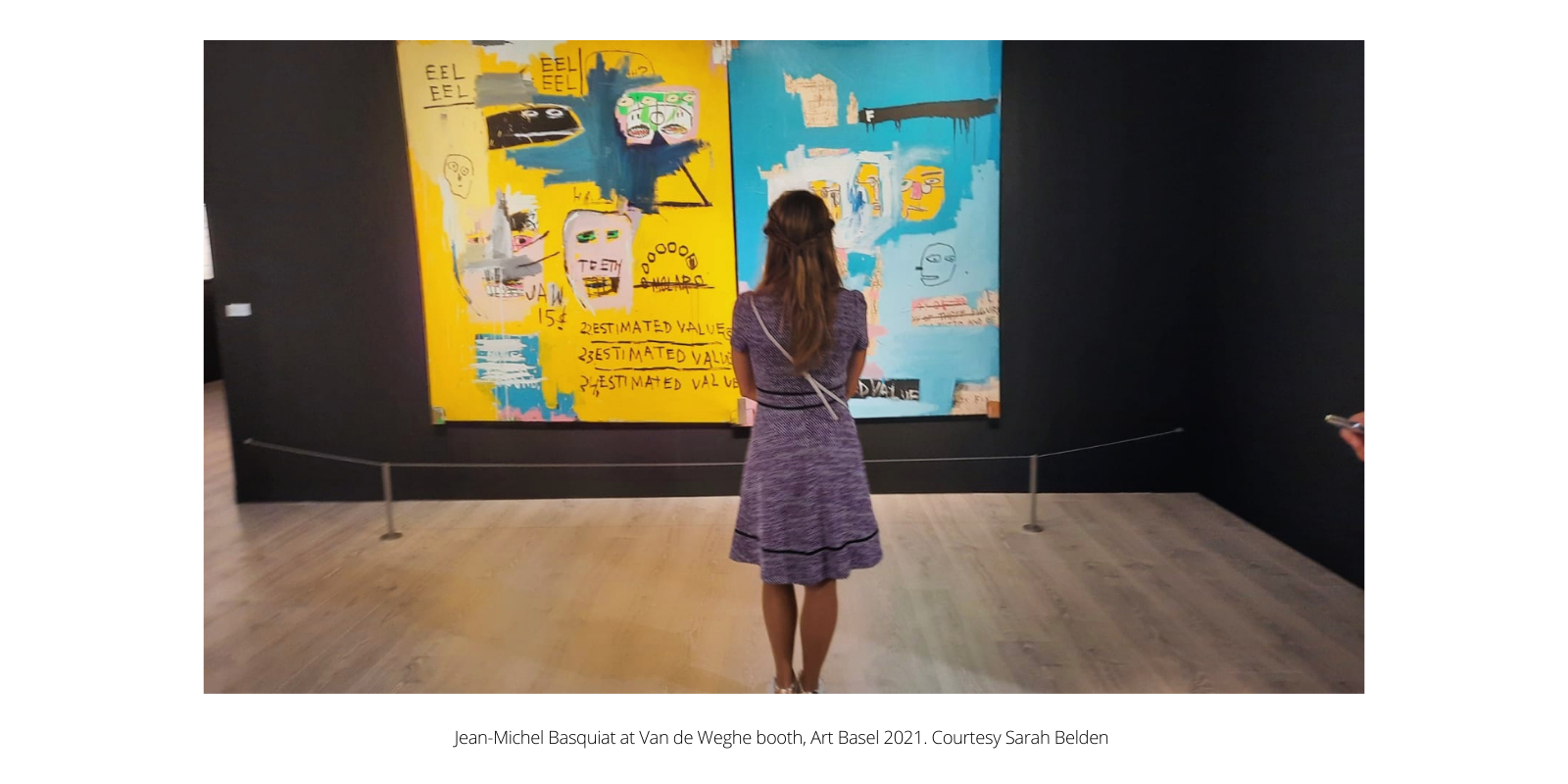 Finally, two other booths of note were Van de Weghe, a leading New York City gallery, who brought a Jean-Michel Basquiat painting that has never been on the market before. Hardware Store, a diptych, measuring 7 x 11 feet that was painted in 1983. Hardware Store has been in the same private collection since the year it was painted, according to art dealer Christophe Van de Weghe. It has been featured in major Basquiat exhibitions, including in New York, at the Whitney Museum of American Art in 1992–93, and in Paris, at the Fondation Louis Vuitton in 2018–19. It was on offer for $40 million, making it one of the priciest works of art on display at the fair. As of this writing, there is no report yet of whether the work has sold or to whom.  And last but not least, we could not cover Basel without mentioning German Gallery Nagel Draxler, who presented NFTs by 8 eight artists, including Olive Allen and Kevin Abosch, curated by artist and critic Kenny Schachter. Schachter also presented his own collectible series called Crypto Mutts, selling 9,000 editions of the series on opening day for .03 ETH each. In a Zaha Hadid Architect’s designed virtual reality exhibit (”metaverse”) Nagel Draxler also sold an NFT by the crypto-artist Olive Allen entitled Post-death or The Null Address NFT for 8 ETH, about €25,000 on the opening day of the fair. You could not actually buy any of the works with regular currency, and instead were directed to OpenSea, a crypto platform, where you had to purchase the works in cryptocurrency. It looks like NFTs have broken into the last bastion of the art world at Art Basel this year. Lets see how many galleries follow suit next June for Basel 2022. Looks like things are almost “back to normal” so we hope to see you there next year!