Login Sign up
The Aesthetics of Enchantment in Abstract Art
Summary

The paintings exhibited, although they nod towards and even borrow from a language forged at a time when men were men and abstract paintings were abstract paintings, ought really to be thought of as outside of modernist modes of thinking about works of art. The exhibition, by virtue of its installation and the nature of its context, invites sustained looking at individual works, rather than being read as a single, cogent entity.

One of the things we inherit from the culture of the last century is the idea of art being either one thing or another: abstract or figurative. Western abstract painting came about in part to show the unshowable: spiritual communions, say, or political ones. But the paintings here are unmistakeably physical and of the world of sight and touch. Their metaphysics comes through an encounter with the world as experienced bodily.

Mark Wright, Lawrence Noga, and Charlotte Guérard’s works, for example, frame painting as an act of space-making. Rebecca Meanley and Nina Dolan’s works foreground the process of applying paint to the surface, and the behavior that ensues. Henry Ward and Gordon Dalton, meanwhile, play at the edges of description and by doing so embody the intransigence of painting as a medium, its ability to be many things at once. What all of these artists do is position their paintings as points of contact between two kinds of experience, the makers and the viewers.

Charlotte Guerard brings together a repertoire of painterly performances – dry, stubby marks, swooping liquid ones – and a close, pale palette, and in doing so generates the sensation of real space. It’s in the spatial effect of paint per se that something intrinsic to the medium comes to the surface: facture and tone stand for encountered territory. Painting is always bound up in acts of memory, especially landscape painting, so often made at a temporal and geographical distance from what it depicts, and the spaces Guérard’s work calls to mind are not so much seen as called to mind. What’s important here is the affect of place rather than its contours. 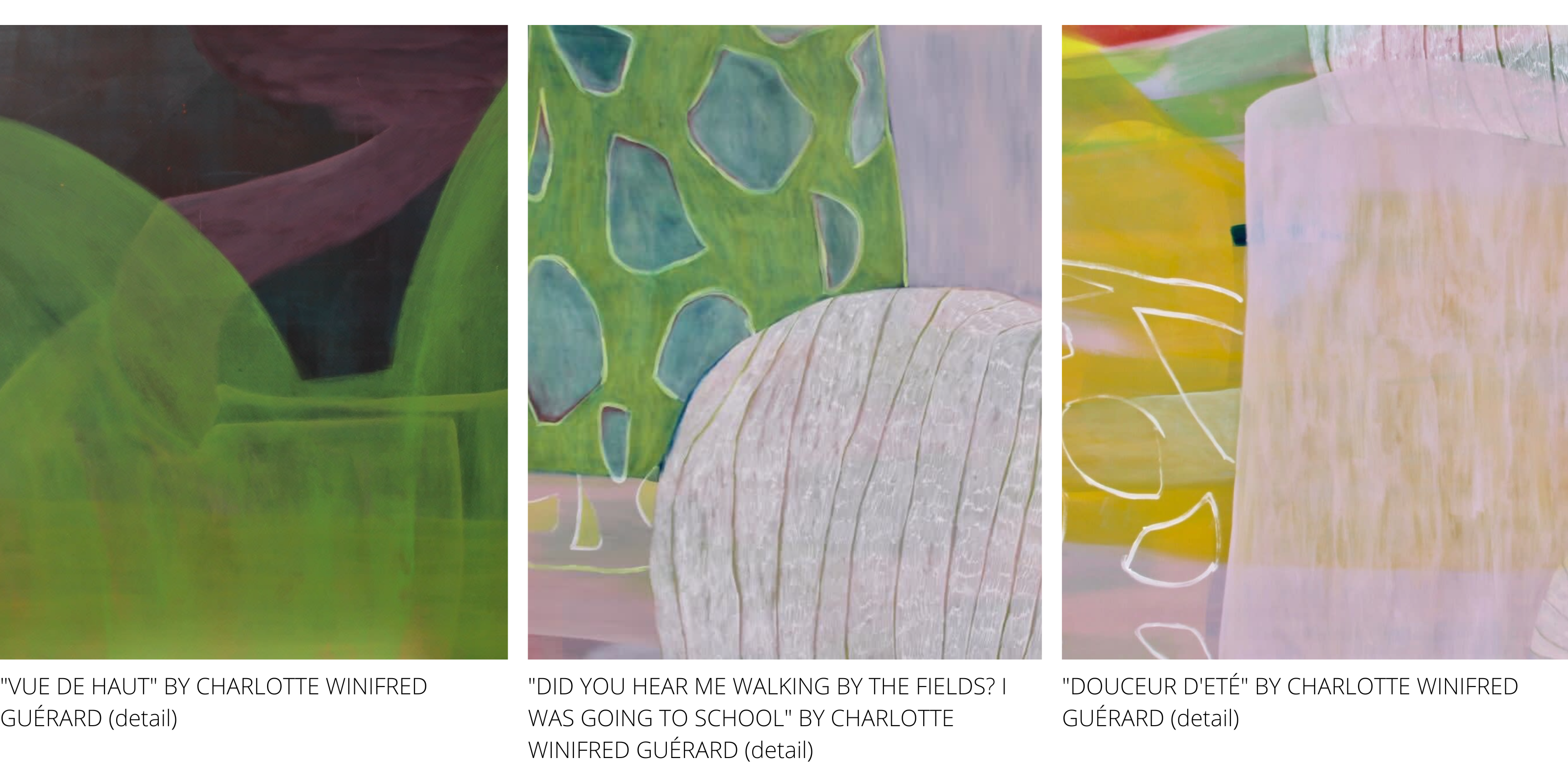 Something similar transpires in paintings by Mark Wright. Using a combination of his own photographic sources and the memory of a visited location (generally, rural settings in Worcestershire, Northumberland, Norway, and Scotland), Wright’s paintings enact memory’s revivals; as in Guérard’s work, it’s the performance of paint as matter that allows the works to construct their impression of a space once inhabited by a body. (The body is remembering, not just the mind). Diverse surface effects (chalklike marks, akin to drawing; recessive pools of organic color) play out the way landscape sits in the memory: as a series of flashes or glimpses, moments of bewilderment or wonder, acute sensations entangled with moments of indolence or absence. And always light: seen, remembered, returned. 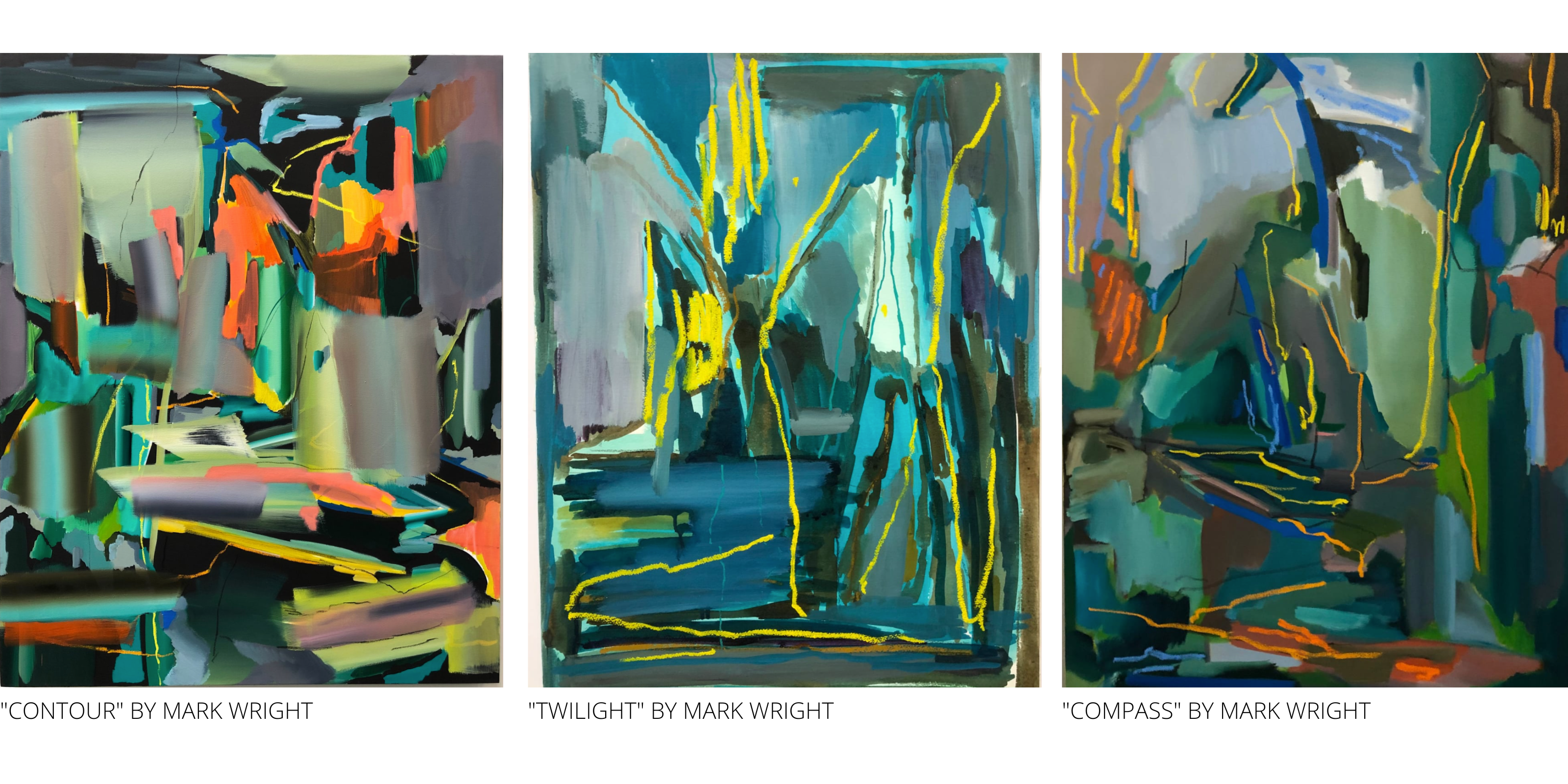 Something similar takes place in paintings by Gordon Dalton, whose paintings figure landscape as something slipping in and out of scale. His are paintings of places desired or imagined, whose perspectives bend and compress according to those desires or imaginings. In Graveyard Sun, patches of heady color stack up to the sky, drawing the contours of a journey that might have never happened; the effect is almost, but not quite, narrative. Shapes of things, shown as though seen in peripheral vision, warp and twist when looked at closely. The mazy walk your eyes take is like the stumbling drift of a distracted mind, deliriously lost. 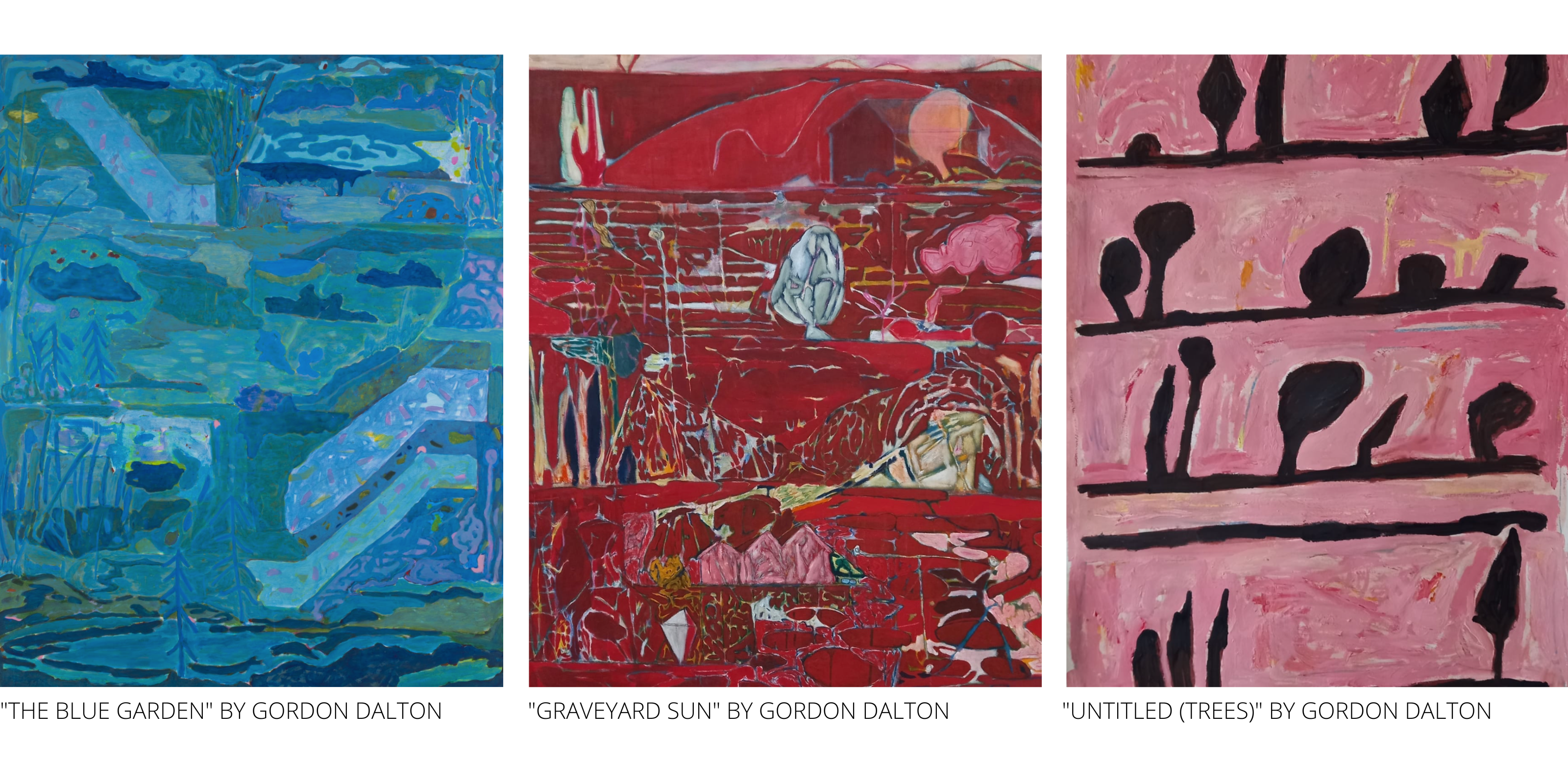 Lawrence Noga’s constructions, on the other hand, build spatial memory out of the stuff of the present, fusing found materials with painterly surfaces to create a jolting, halting visual effect. The disparity of visual movement, between the loping and the stuttering, makes Dalton and Noga’s work mutually revealing. Pay close attention to one of Noga’s works and its staccato rhythms come to life; opaque geometries of hard colour meet tenderly handmade edges. Digging into his own family history, Noga unearths spaces of performance and employment (his mother sang in jazz clubs, his father worked in the Caprice restaurant) and evokes the charge of that encounter through a collage aesthetic that refuses to resolve itself: it’s always happening. 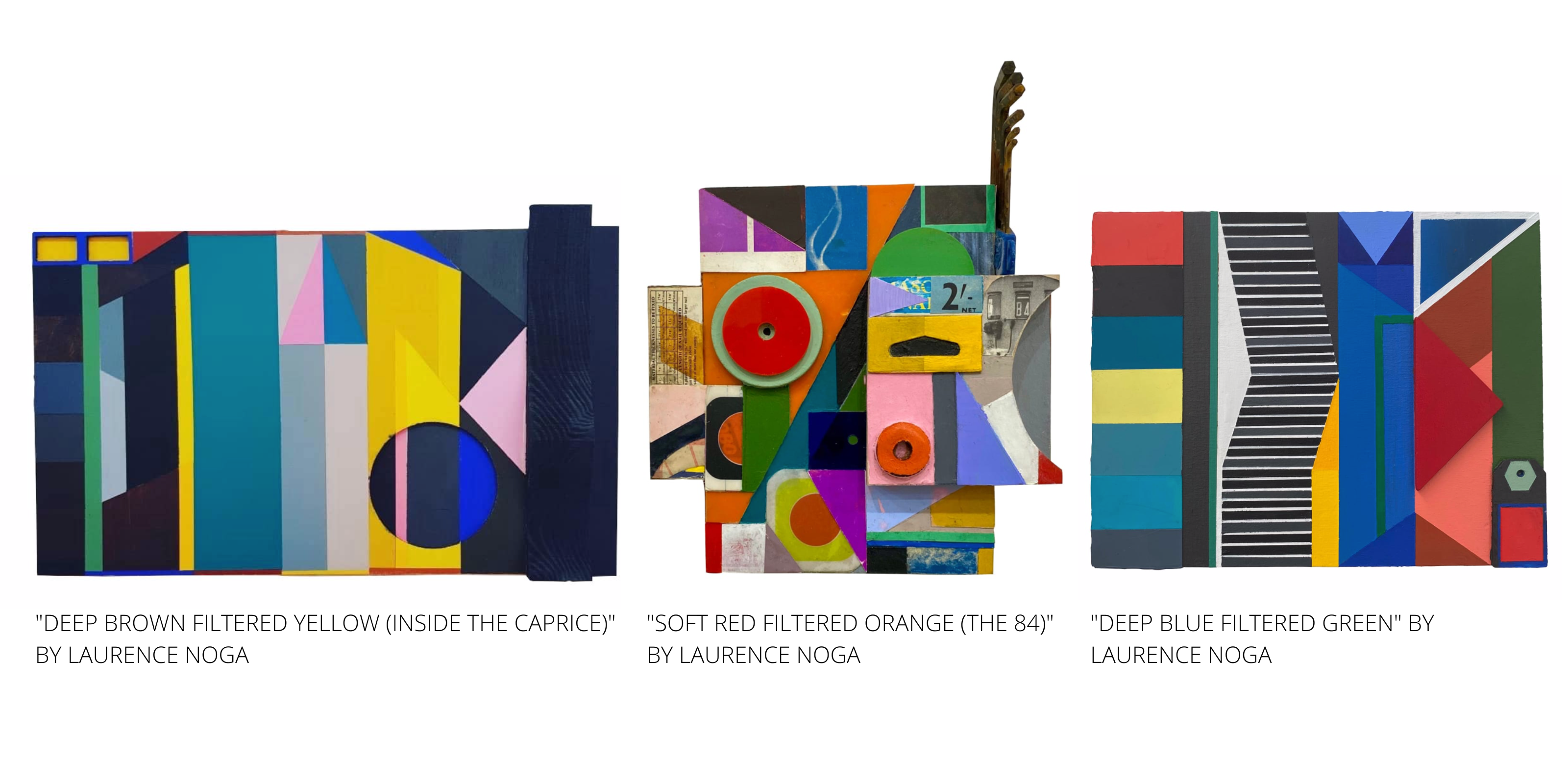 Some sort of collagist kinship is at play in paintings by Nina Dolan. Sustained attention to their surfaces reveals a kind of internal history, whereby layered color and cut shapes create the effect of a geological structure, some sort of deep time. Their titles – Egyptian Deities, The Nile at Night – further imply an archaic mode, with vertical elements, like totems, half-revealed through her process of addition and subtraction. Her use of encaustic paint, best known through Jasper Johns’ work of the mid-50s, but pioneered in Roman Egypt – situates them in a similarly indeterminate historical setting to Dalton’s woozy worlds. Dolan’s work reminds us that it’s in the process – what painting is made to do and what it decides to do anyway – that painting’s purposes come through. 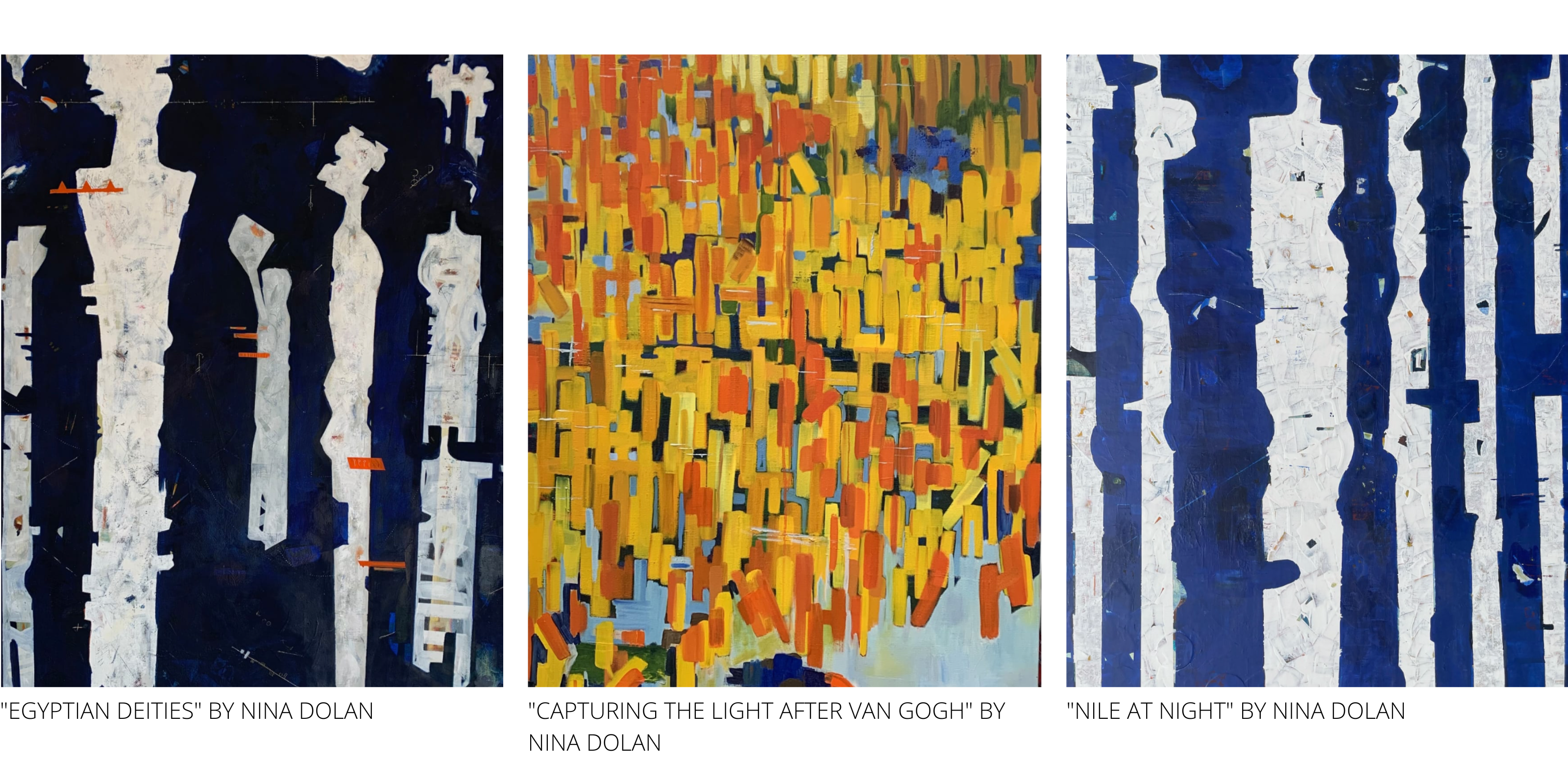 This kind of temporality is made visually available in the work of Rebecca Meanley. Gestures applied in a water-based binder remain semi-transparent, tinting their neighbors and building their own spatial presence, a little like the cloudlike semi-density of a Jackson Pollock. The history of their making thereby becomes a spatial experience: time made visual. Her subsequent process of erasure and effacement is a form of what the artist calls “unpainting”, reversing the forward movement of gesture by removing paint, which reveals parts hitherto concealed. In this sense, studio practice becomes less about getting a painting done than about a process of self-reflection, correction, and analysis; the time spent making is human time, after all, and it's that that pulls her paintings into the circle of our shared experience. 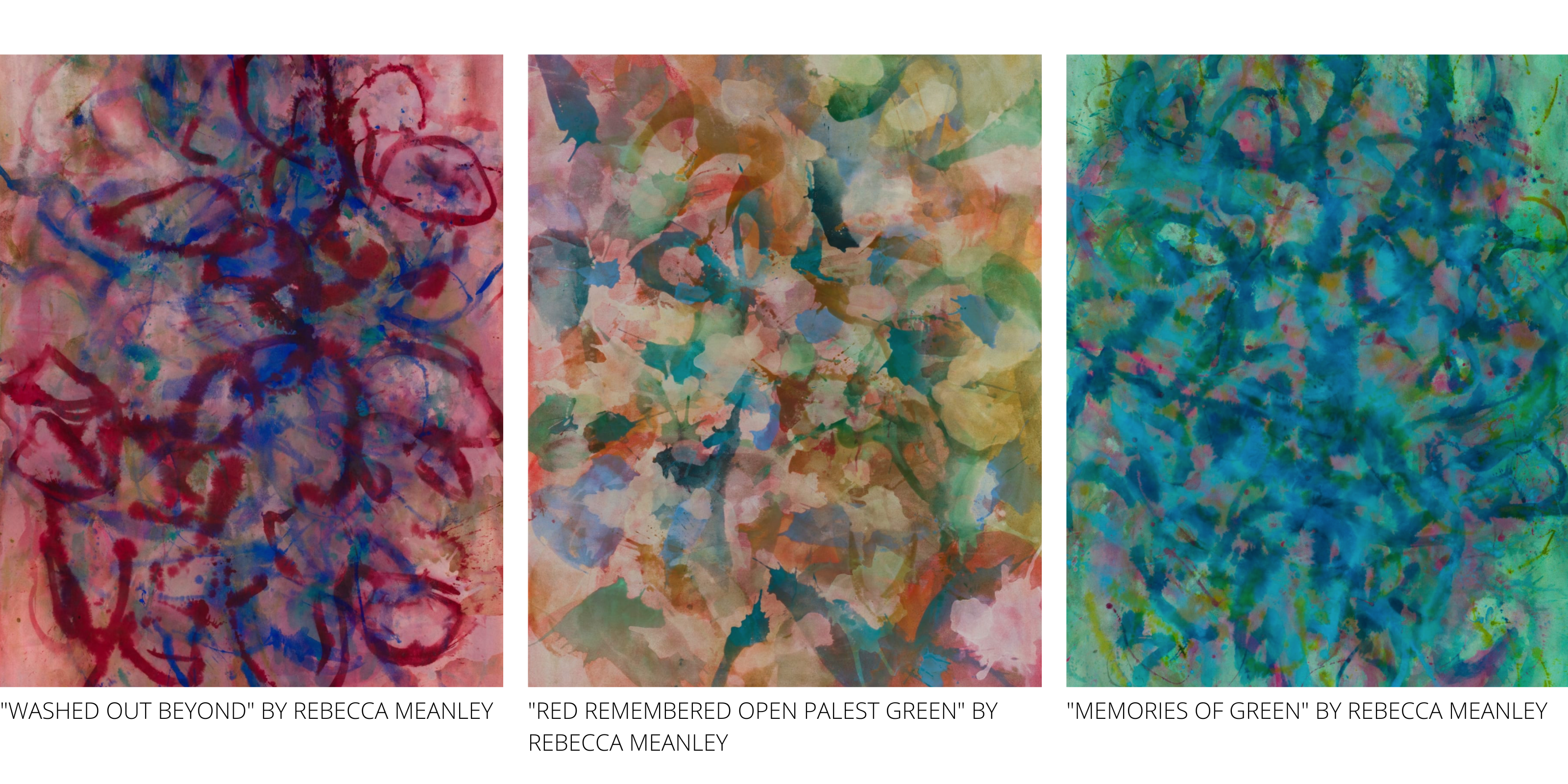 This human time becomes generative in Henry Ward’s paintings. Ash and Sunday are reworked versions of older paintings that sat in his studio, somehow unresolved or indeterminate, for two years. Like Dolan, his process in this work is one of erasure and revelation, using the existing painting – made, of course, by an earlier version of himself – as a point of departure for new decisions made in the present. This tension between moments in time allows Ward to build into his work the effect of the studio as a place not only of action and production but of reflection and rearrangement too, of both action and its opposite. If the real subject of any of these paintings is human time – the time of making and the time of viewing – then these works enact it, imagining an artwork as the beginning of a conversation between marks on a canvas and beyond, into the mind of the person looking, and back into the world from whence they came.

You can make up your own history, but the point remains: the paintings here assert something, however quietly – that painting, whatever it’s of, is always first and foremost of the world we share. 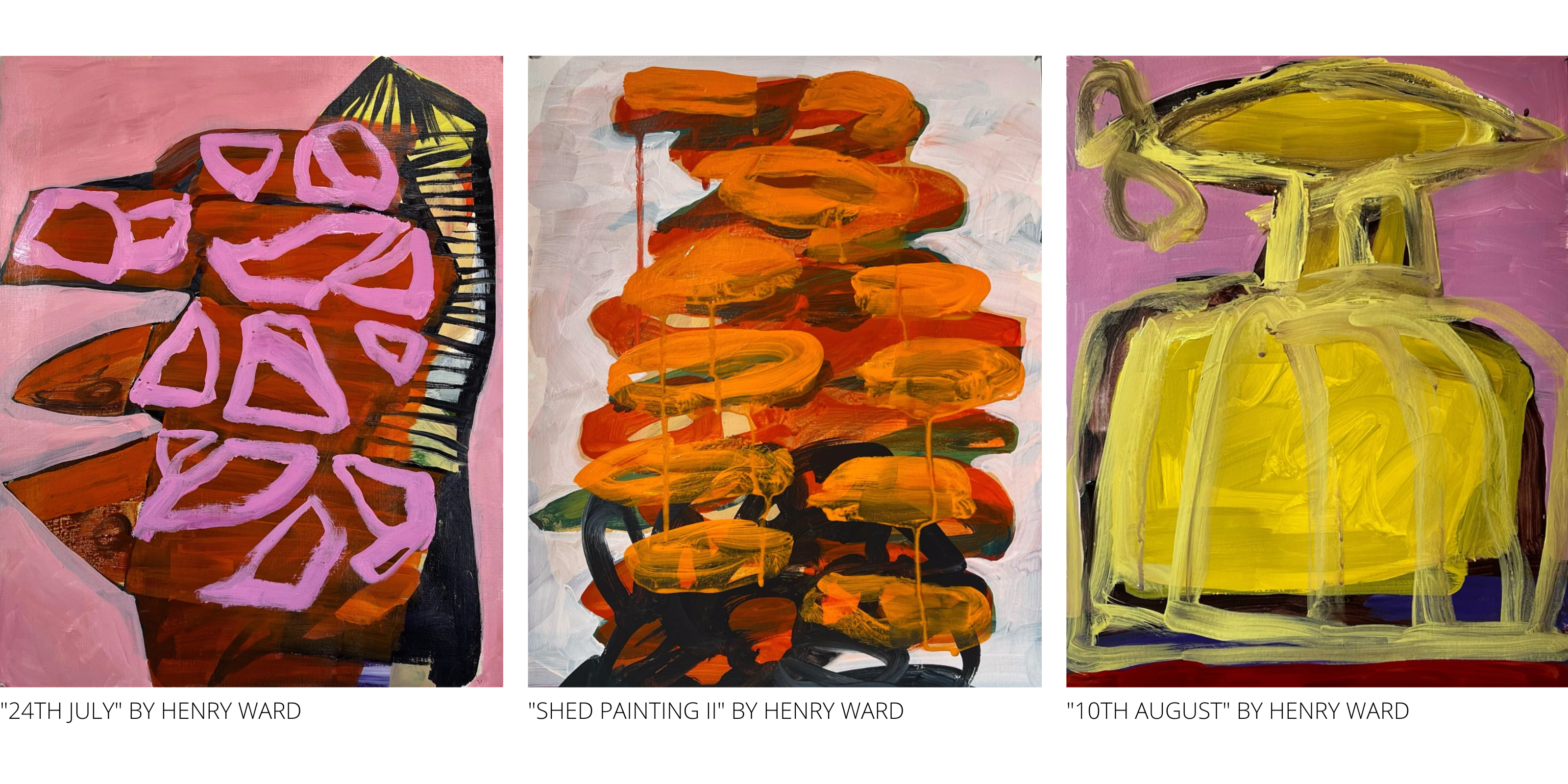 Capturing the Light after Van Gogh

Did you hear me walking by the fields? I was going to school

In her pink she swan under the bridge