Aleph Contemporary Gallery is glad to present "Field Notes," an exhibition that explores the resonances across the work of artists Anna van Oosterom, Jacopo Dal Bello, and Andrew Hewish. "Field notes" are observations recorded ‘in the field’. These works are soundings of our times, they plunder sources using the language of collage to produce a collage of languages - written and visual. They produce for the viewer a world that is open and intriguing - from conversations overheard on the subway, text sliced from grand musings, glyphs and numbers dropped out of the everyday, marks from the masters and bits of canvas sewn together.

"Field Notes" provides a vital encounter for the viewer; observations from our world that through collaged irruptions of language allow a space of lyrical generative play and possibility. While some works in this exhibition are from direct observations, recordings, or sensations in situ, what binds the works in this exhibition is the play of language, the use of collage, and the shared field of that play in the rectangle.

These works do not defy meaning as much as expanding the space of meaning in the way that art can. The lyrical function here sketches a deeper correspondence with our experience of the world than might a timeline on a social media feed. The logic of image, but not of illustration, restores something of the better part of ourselves beyond what technology, a selfie or the predictive text of our lives demands. In these works, language - visual and text - is manipulated as a raw material in the way paint pigment might be mulled and blended in the painter’s studio. The archival material sampled creates a drag between the now and the past but holding these and the disparate elements of the collage process held in suspension form part of the charge of the work for the viewer. 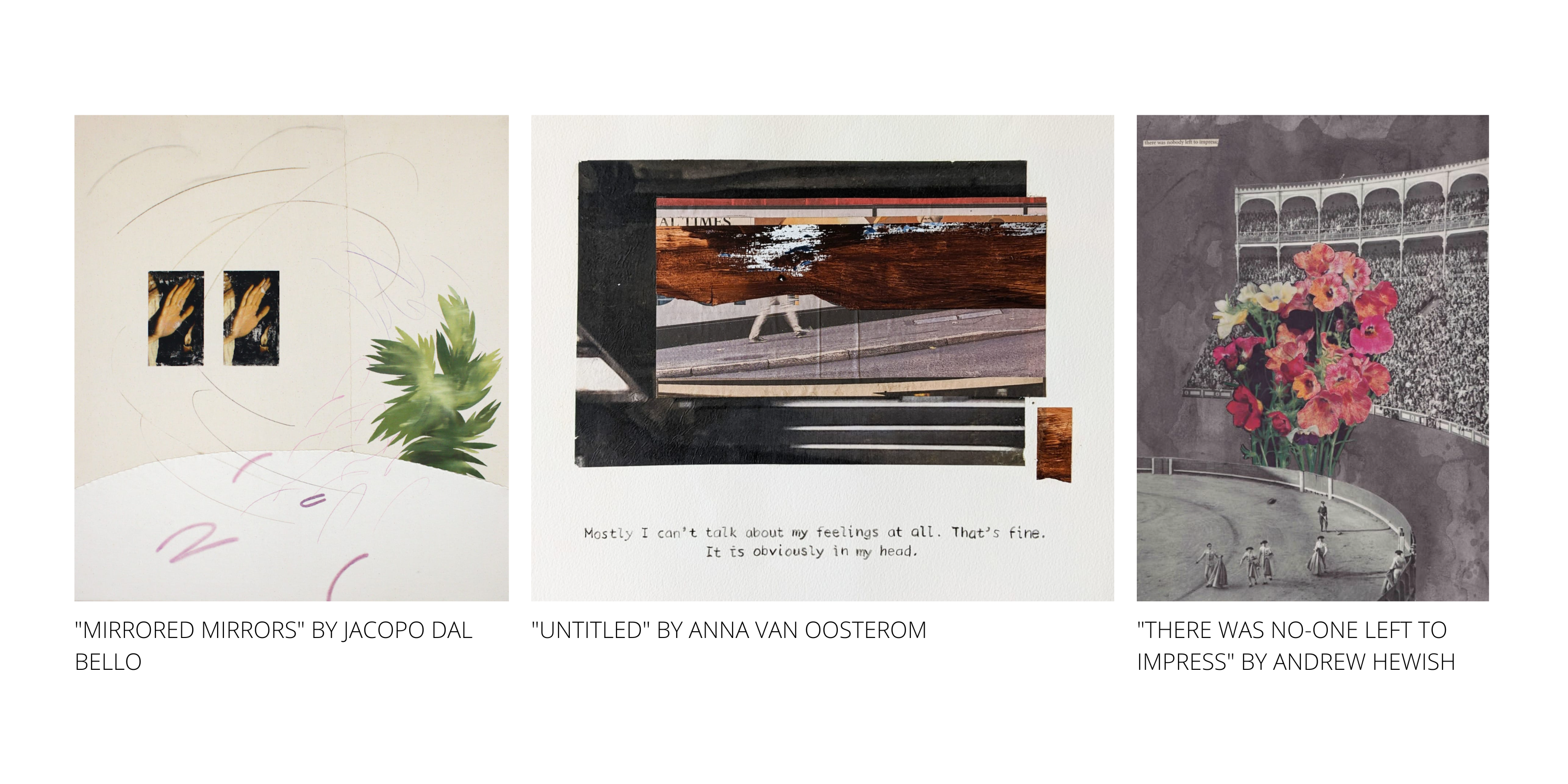 Anna Van Oosterom sets a stage for the viewer, a film treatment using transfer from photographic images collated one by one on the page. These worlds are built slowly and carefully in response to a particular text. Rather than a build-up of glued cut-outs on the page, van Oosterom spends careful time, in the spirit of Rauschenberg, lovingly transferring the ink, or rubbing back the paper on which the borrowed image sits, such that the image sits as a ghostly and ephemeral presence on the page. These are not illustrations but rather follow an internal, felt logic. These are not here to be logically decoded, but rather the dissonance between text and image floats freely. Yet they are potent words, gathered as they are from listening in to conversations on the New York subway. They are the words of unknown travelers, recorded verbatim and given new life here. The effect is one of watching a curious film in an unknown language, where the subtitles deepen the shadows rather than illuminate them. These are the private dramas of strangers made strange. 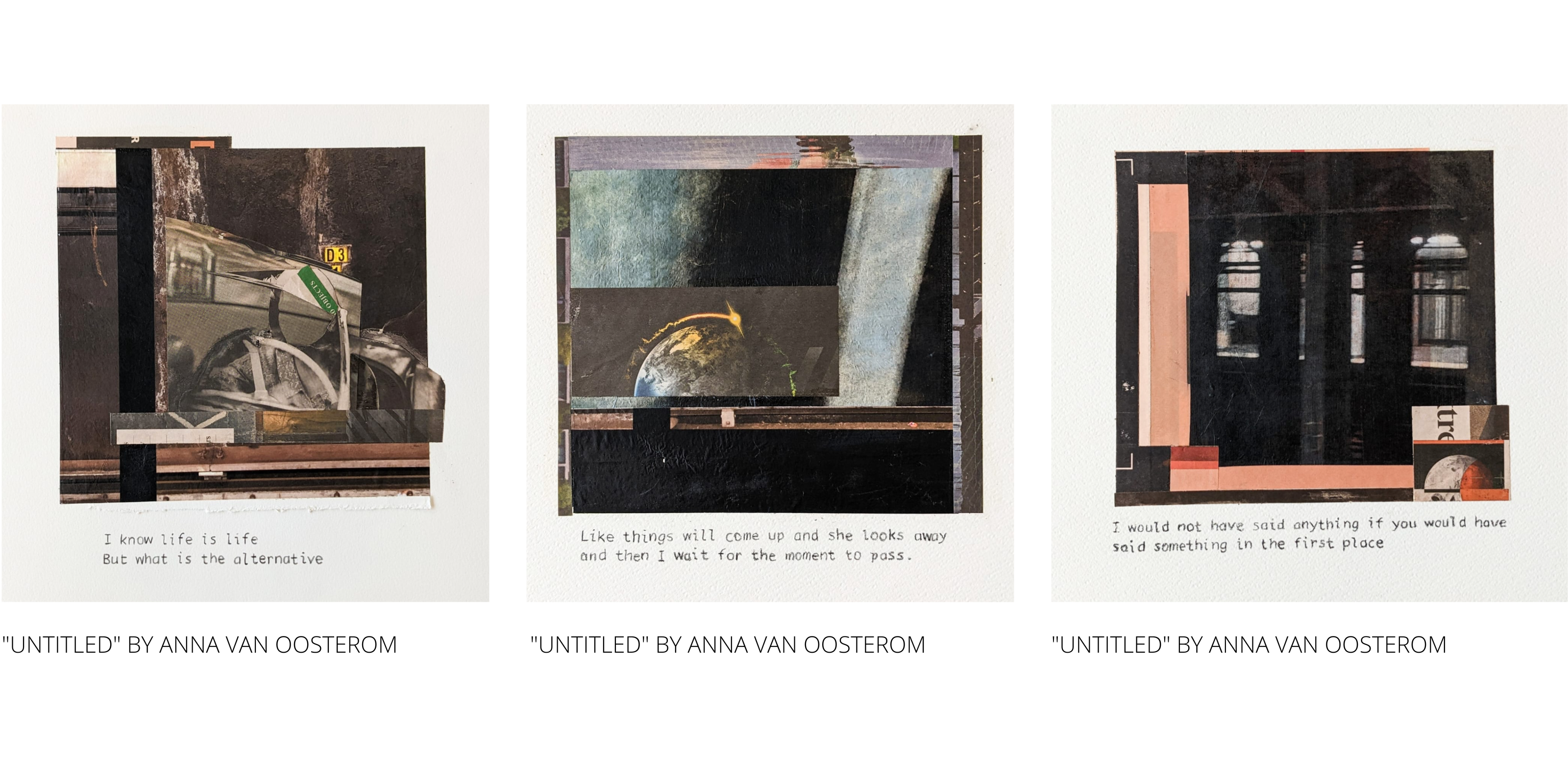 Jacopo Dal Bello, who currently lives and works in Berlin, was a student in the studio of Hewish, called ‘The Multivalent Line’, at what was then the Sir John Cass School in London. It was there he began to develop plundering the variety of tropes that has become his mature style. The work is literally sewn together, where different segments are attached to form the ground on which the paint, pencil, transfer, and glued inclusions sit. This is painting on the uncertain but pleasurable ground. He has literalized the process of ‘suturing’ - whereby elements provoke meaning or narrative by virtue of their proximity to each other. The instability of coherence/non-coherence of collage is exploited here by Dal Bello, made more so in the dynamics of his drawn or pictorial incidents versus the blank space of the compositions. Tangential nods to language theory, art history, and forms of graphic notation are the building blocks of Dal Bello’s work - a detail from a commercial trademark, intense pencil marks, or a borrowed picture. The works achieve a distinct synthesis in their balance between the free language of drawing and the world of the picture. 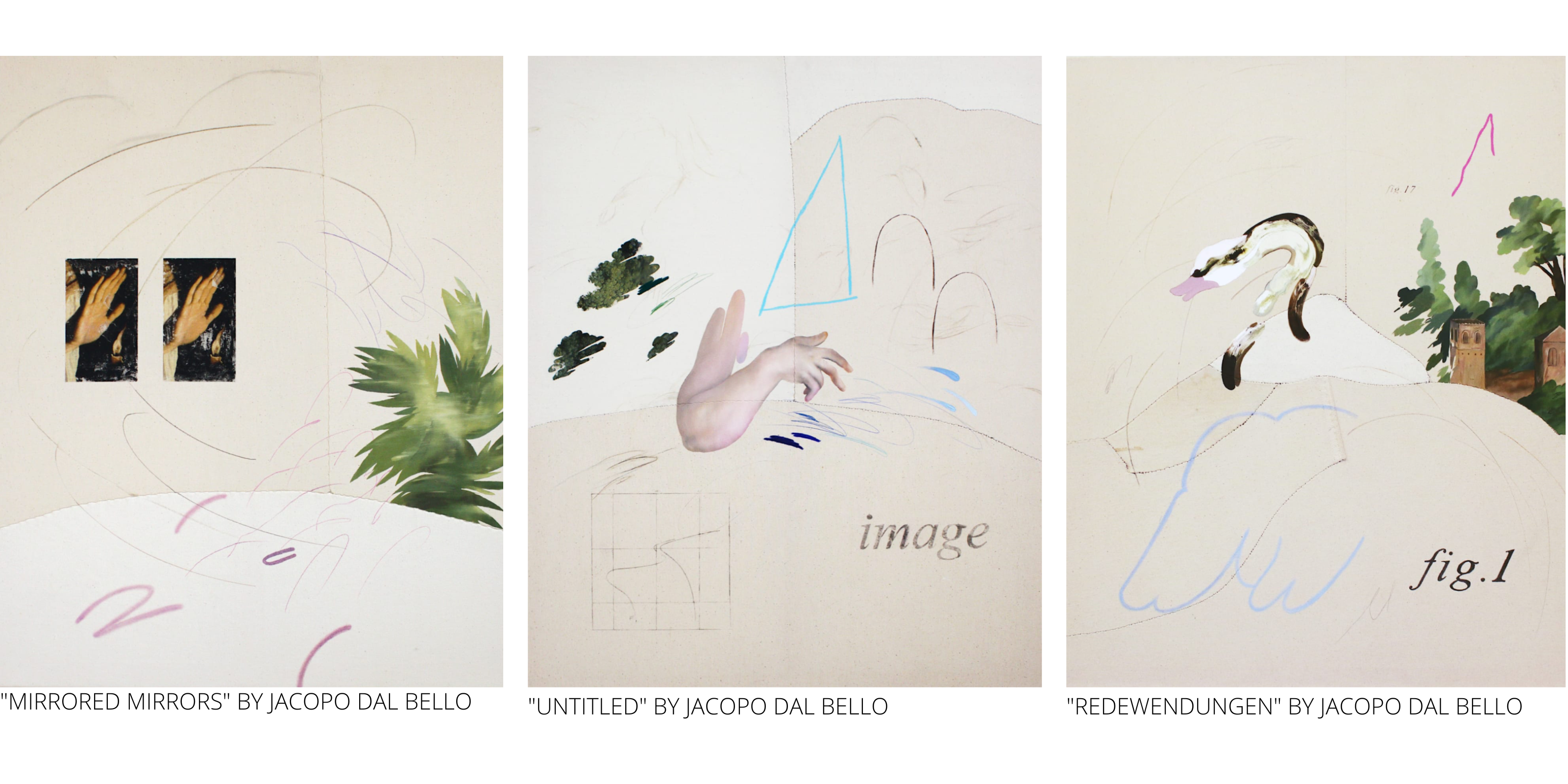 Andrew Hewish’s series ‘One Liners’ makes explicit in the title interest in line in the drawing context and implies a humorous mode - as with van Oosterom’s work the line of text is excerpted from its original context to float more freely and mysteriously alongside that of the image. If they form documentation of the world redolent of those of a codex, encyclopedia, or archive entry, it is for a form of knowledge that remains shrouded. The specific cut in the line enhances an absurdist view, and visual confusion is set up between the ink and graphite backdrop and the photogram inclusions. Hewish works in series, as part of a conceptual painting practice that attends to the site, or the particularities or demands of the period in which the works are produced. A distinct visual language is established in each series. 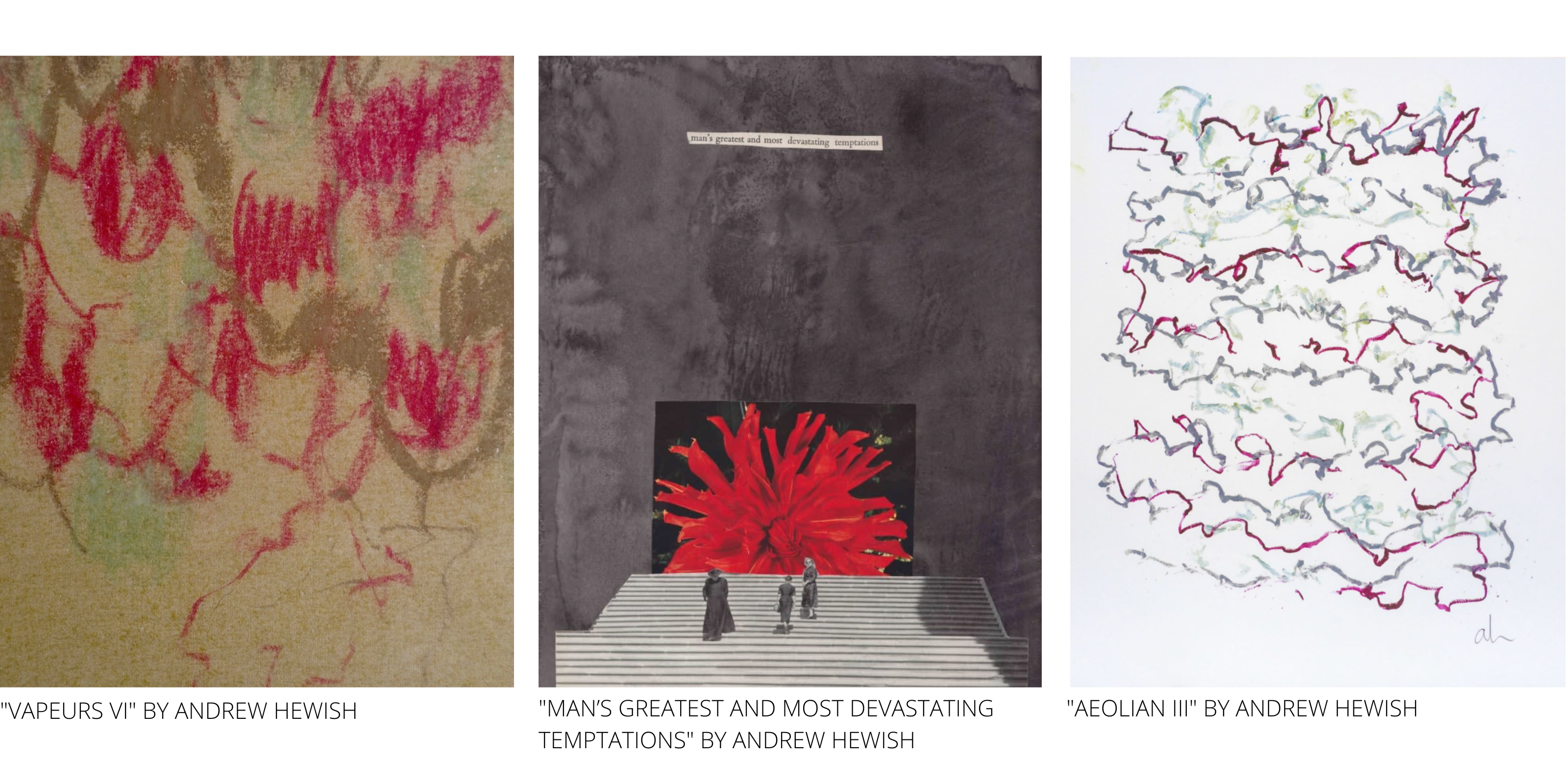 The work by the three artists here provides a vital encounter for the viewer - soundings from our world that through collaged irruptions of language allow a space of lyrical generative play and possibility.

Building and destroying castles in the air

The unfamiliar between two places I know

There was no-one left to impress

The vagaries of fortune and the demons of Ill luck

An uncomfortable tension in the modern

The subject is, however, subtle and delicate, susceptible

Disease. The beauties of decay and dissolution

The Kind of Painting We have Been

Man’s greatest and most devastating temptations

Marks of the spiritual ravages caused by idleness

A sense of adventure and power and perhaps of curiosity

Intensifies the sense of security in a hostile world

These are the lucky interludes one enjoys

The ultimate grandeur of the whole

Cultivating every sort of perversion and every discord

Not an affair of forms but the relation of forms

Portion out one's experiences for sooner or later one arrives

Nothing could have been more moving