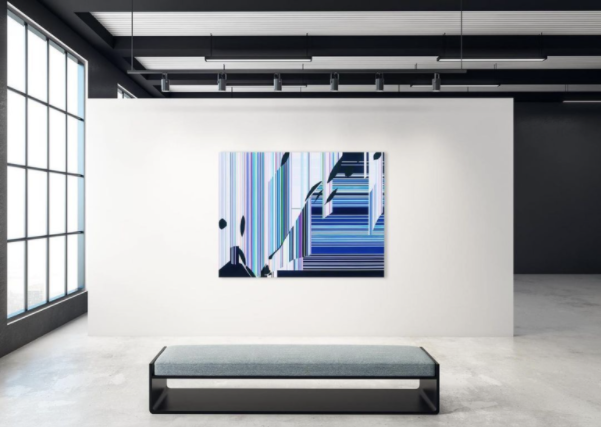 We are proud to celebrate the diversity of our artists and their practices. Examples of strong juxtapositions within our contemporary art space include the contrast of the delicate sculptural landscapes of Geoff Uglow and the coding language canvases by Josh Rowell; the introspective surrealism of Piers Alsop and the observational abstractionism of Fernanda Galvão; the imaginative collages by Rachel Libeskind; vivid and textural sculptures by Svetlana Bogatcheva and pastel and delicate sculptures by Alex Searle; Hugo Lami’s surrealistic reflection of the digitalisation of our world, Gary Komarin’s vibrant exploration of colour in multiple of his iconic series and Simona Sharafudinov's use of diverse mediums to convey existential tensions . Each one of our artists speaks a unique language and we aim to engage the viewers with  extraordinary examples of contemporary artistic practice.

We hope that Artscapy x TSIVRIKOS SHAKE Selects will provide a unique opportunity to re-introduce some exceptional works while allowing our global family and collectors to view works they might not have had the opportunity to see if they were unable to travel to London to visit our shows in person.

Based in rural Cornwall, Uglow looks to nature for inspiration. Several times Uglow has diarised the passing year with painted colour notes expressing the passage of the seasons by pinning the essence of a particular day. He describes many of his paintings as "a handwritten letter, a moment, which can suspend disbelief, a fragment of vanished beauty." His work is features in multiple key museums like the Royal Scottish Academy, Kelvingrove Museum and the Royal Glasgow Institute. 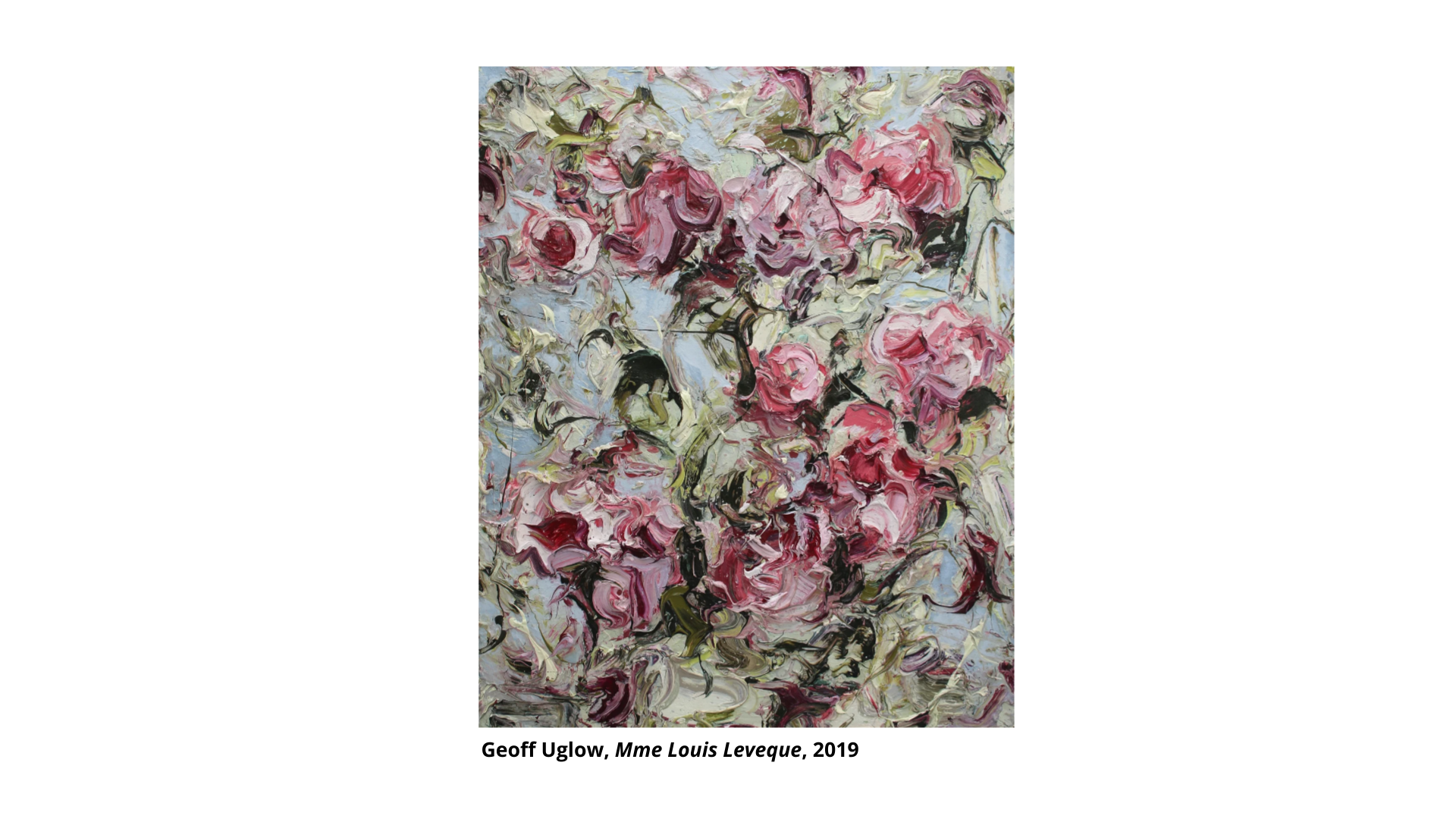 Josh Rowell generates his artistic vision by focusing on technological advances that shape our contemporary lives, communicating our increasingly mediated human interactions within the confines of visual art. The artist balances analogue techniques with the instantaneous nature of the digital age. This juxtaposition produces a language that explores and reshapes information, and celebrates the hand-made in a time that is increasingly being enveloped by the virtual.Josh Rowell has work in private collections in UK, USA, Canada, China, Germany, France, Spain, Italy, Switzerland, Monte Carlo, Australia, Ireland, Russia, Bermuda, Hungary, Mexico and Peru. 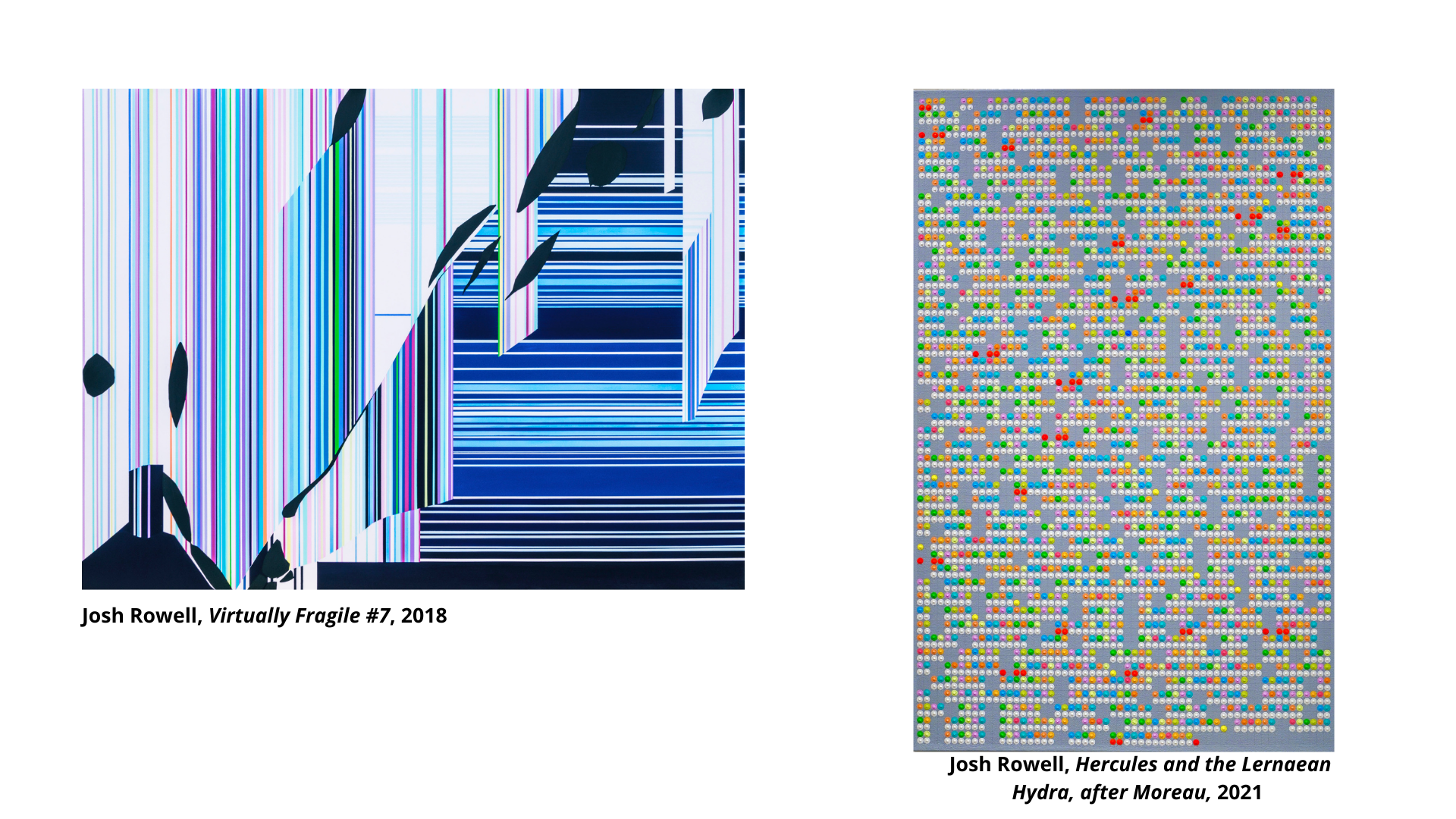 Piers' approach to painting often exhibits the co-existence of different styles and techniques on the same canvas. He enjoys the spectrum of realism that pervades through to the abstract, producing a montage aesthetic that does away with traditional perspective. At times it calls to mind prop facades from a stage production.He says, “I’d like my paintings to read a bit like medieval illustrations for parishioners attending their local gallery on a Sunday”. Piers constantly probes at the concept of truth, questioning both religion and art, both of which create frameworks for doubt as well as faith . Never short of humour, the paintings manage these more philosophical dimensions with a light touch, as if to recognise the vanity of such pursuits. 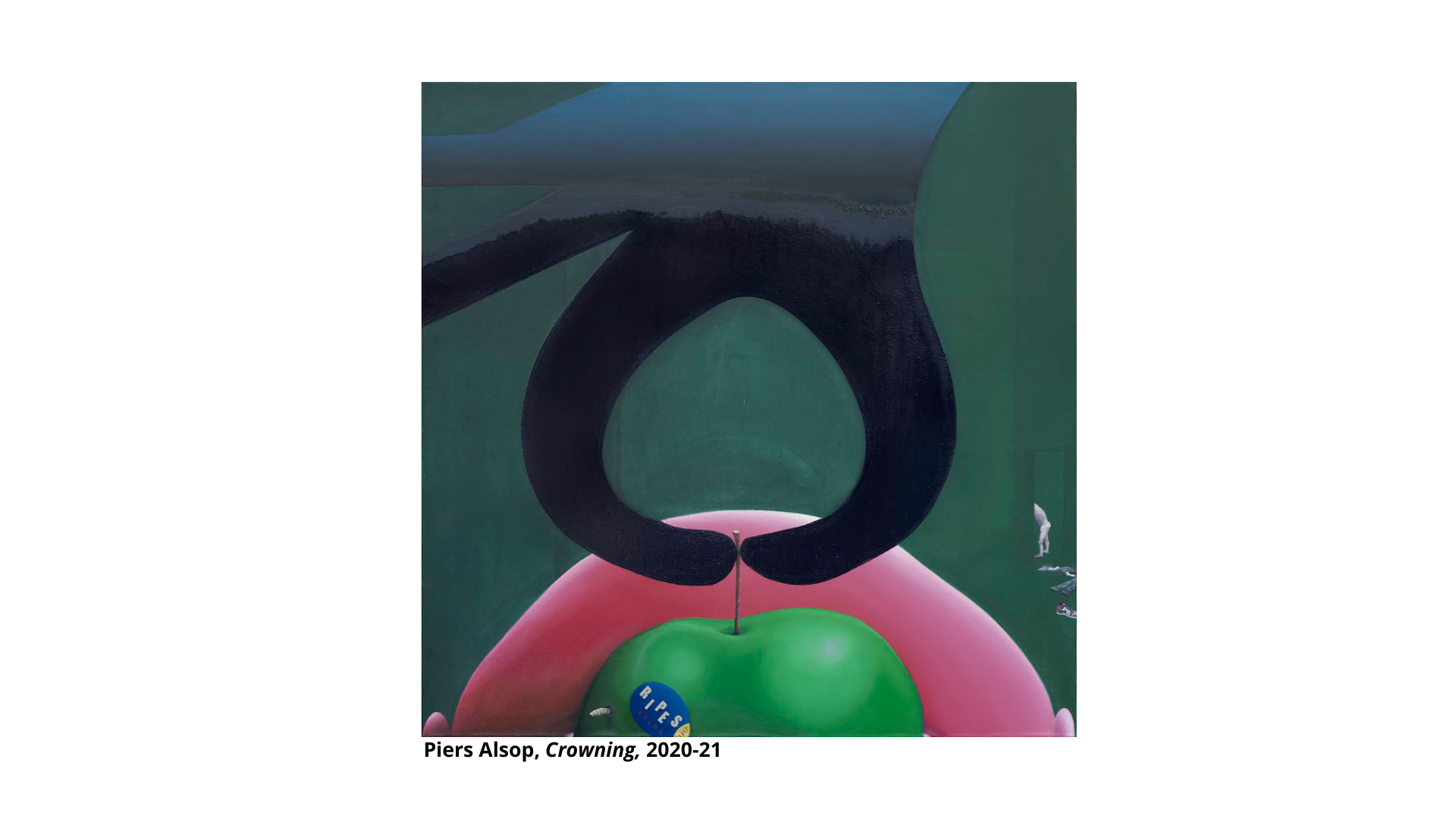 Fernanda Galvão (born in São Paulo, BRA, 1994) B.A. in Visual Arts from FAAP (BRA) (2016), in the past years, she has participated in several collective exhibitions, such as: the “44o SARP” (BRA), where she received an acquisition award that also resulted in her first solo show “Papila Sobremesa Tutti Frutti” at MARP (BRA); "47th Salão de Arte Contemporânea Luiz Sacilotto" (BRA), where she also received an acquisition award; "And in that year the black night nails the door", at Oficina Cultural Oswald de Andrade (BRA); "28th Mostra da Juventude" at SESC Ribeirão Preto, the 15th and 16th editions of the "Program Exhibitions" of MARP, Ribeirão Preto (BRA) and the "47th Annual Arts of FAAP (BRA).Fiction - both literary and cinematographic - is one of her starting points for her objects, installations and paintings. Regardless of the language, what interests her is the constitution of a particular atmosphere that suggests another space, with less sense, rules and clarity. 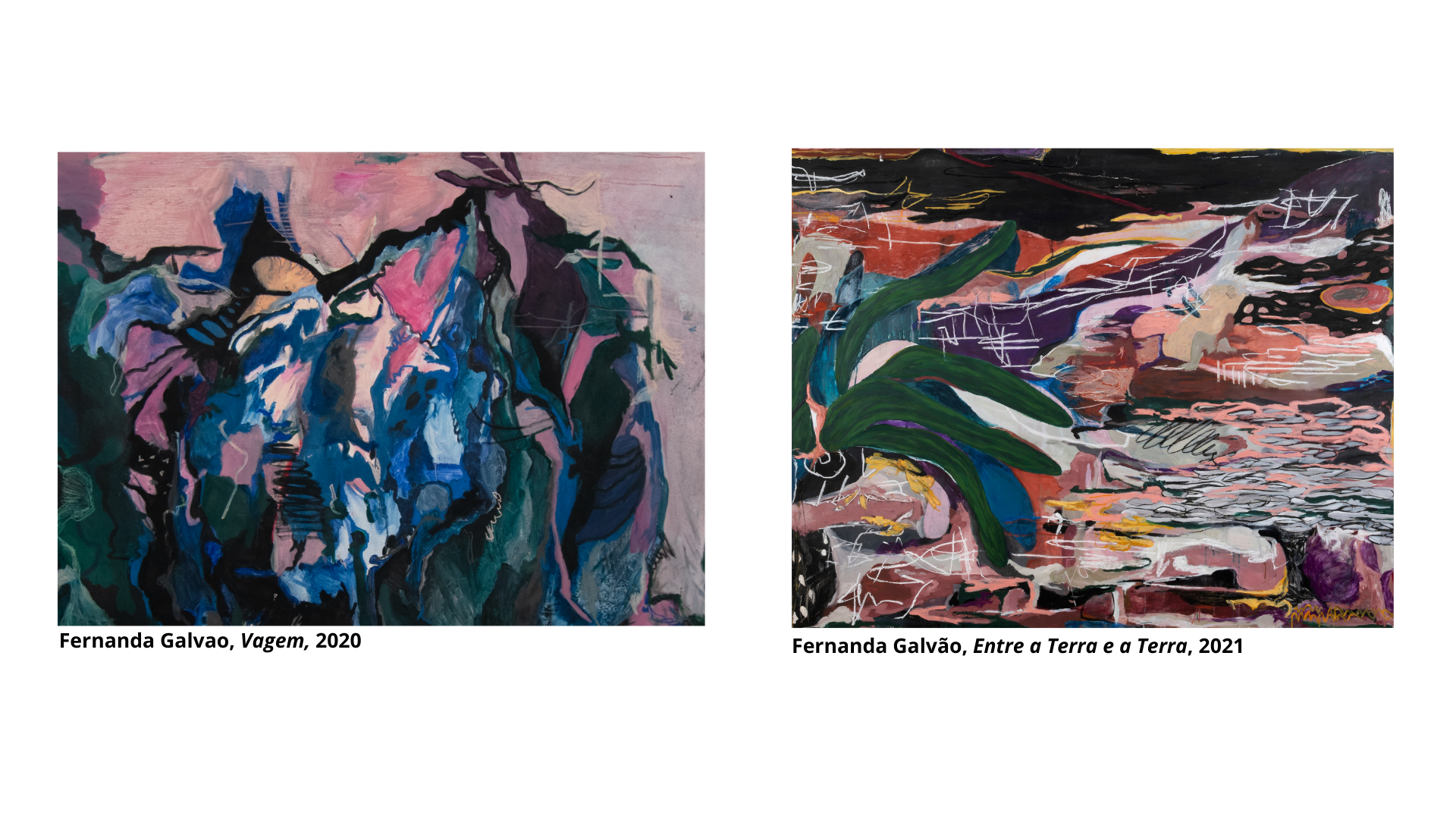 Rachel D. Libeskind, born in 1989 in Milan, Italy, was raised in Berlin, Germany before moving to the USA in 2003. She graduated with honours in Visual Studies from Harvard University in 2011. Libeskind has had solo shows in NYC, London, Rome and Milan and has participated in group shows in Italy, London, Paris and New York.Rachel Libeskind has quickly became known for an interdisciplinary approach to her practice which incorporates everything from canvas and collage to performance and installation. 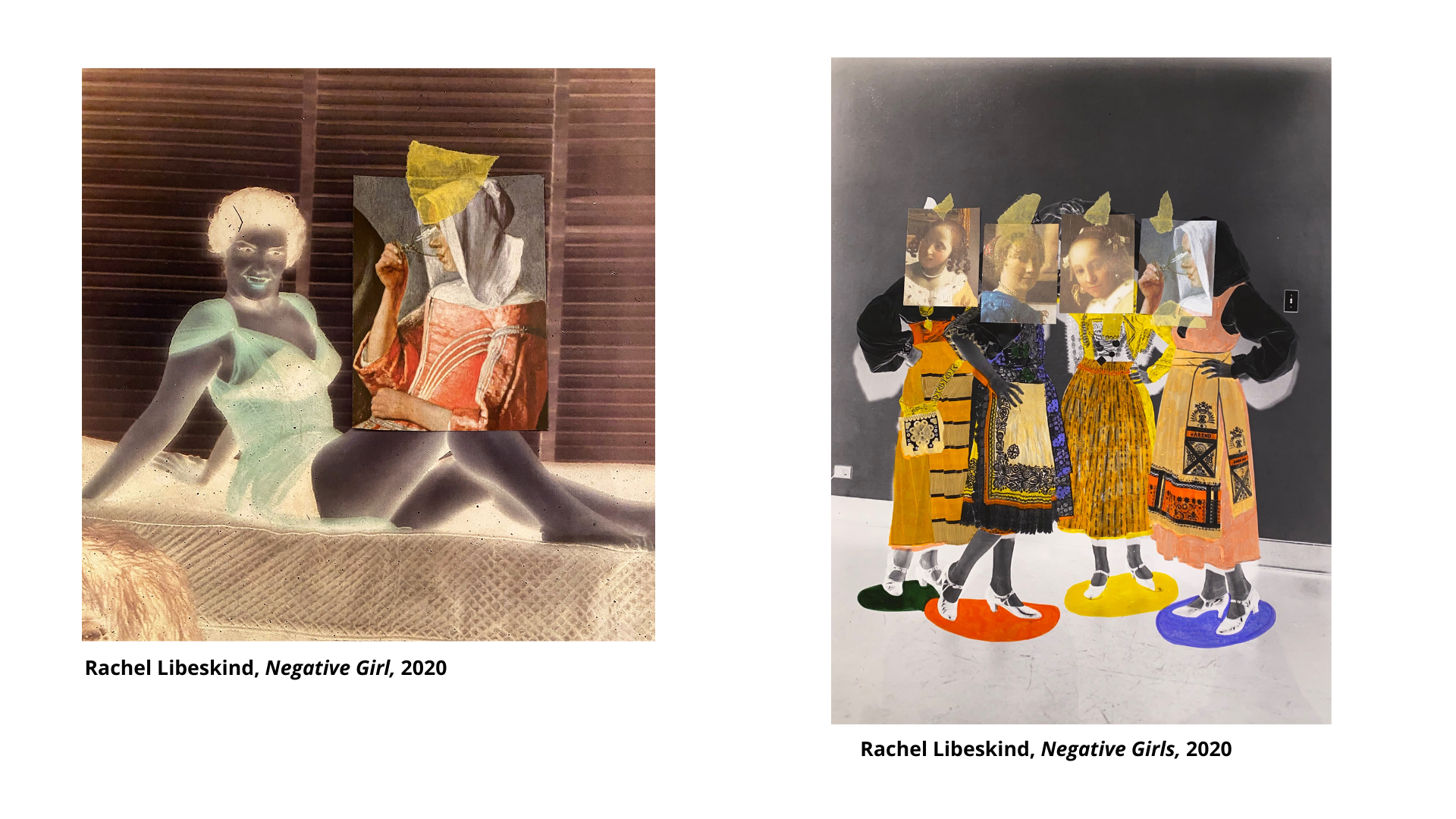 Svetlana Bogatcheva (1986) is a contemporary artist based in Vaasa, Finland. Her works have been shown at the Royal Academy of Arts Summer Exhibition in London (2015), exhibited in the U.K. and Finland, and reside in collections in Scandinavia, UK, Brazil, Kuwait, Canada and the USA. She employs natural, post-industrial and post-consumer materials like textile, rubber, plastic, stone, bitumen, earth and ash. Her conceptually based practise merges the worlds of sculpture and painting, working in a dynamic manner that is defined by her impeccable skills in forming materials into works that invite deep contemplation and presence. 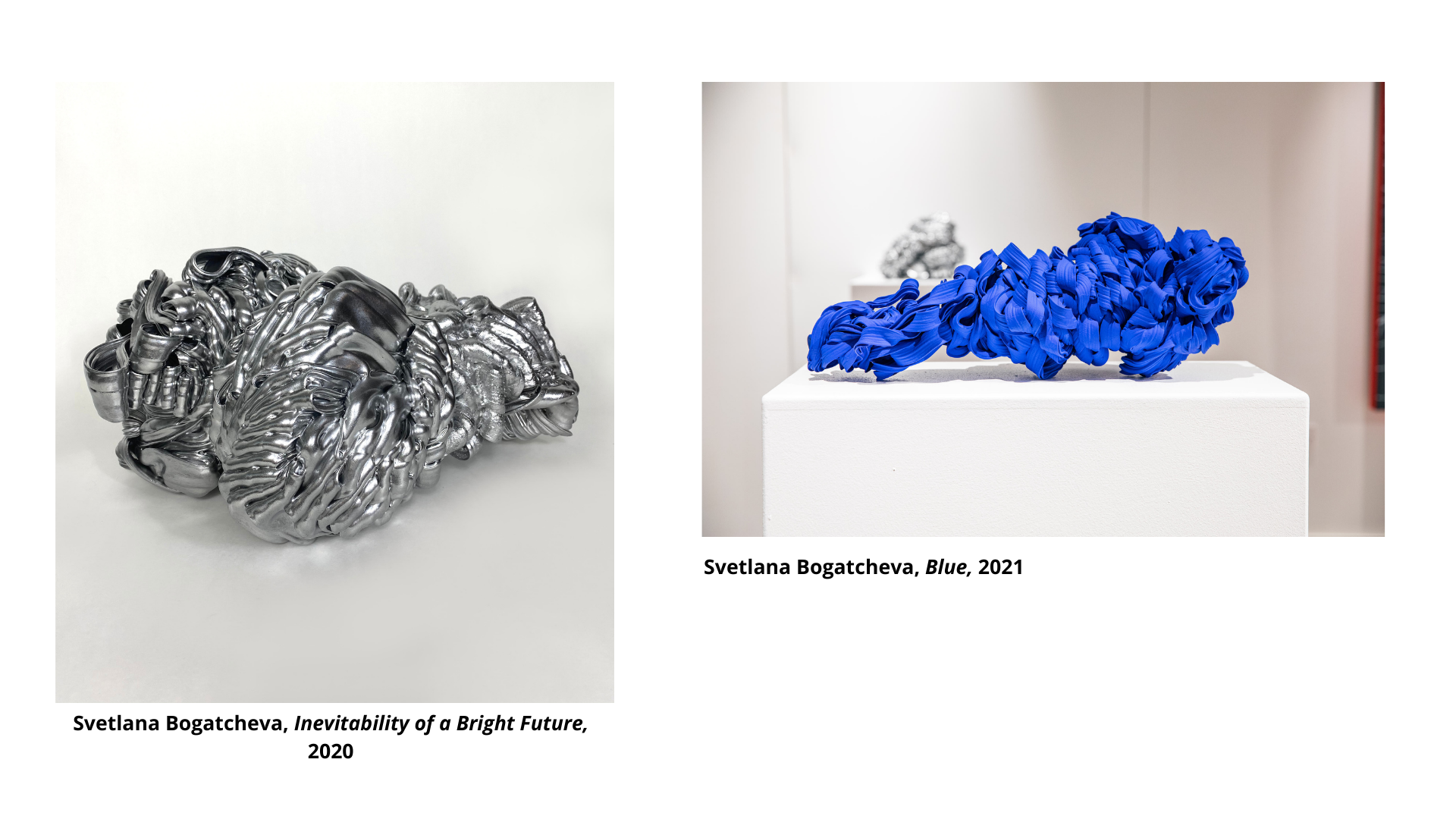 Alexandra Searle is a sculptor based in London. After studying Fine Art at Newcastle University, graduating in 2015, she went on to complete an MFA in Fine Art Sculpture from the Slade School of Fine Art in 2019. Drawing on references to the mental and the medical from her own experiences with anxiety and hypochondria, and the disquiets of our time, her sculptures play upon the tensions, fragilities and failures involved when trying to keep ourselves in a delicate equilibrium, both in body and mind. Familiar at a visceral level, her sculptures are concerned with too-muchness – when substances and materials reflect our fears or desires, and in the process, become unmanageable, uncontainable or gluttonous, escaping from their restraints in bulges of protest. 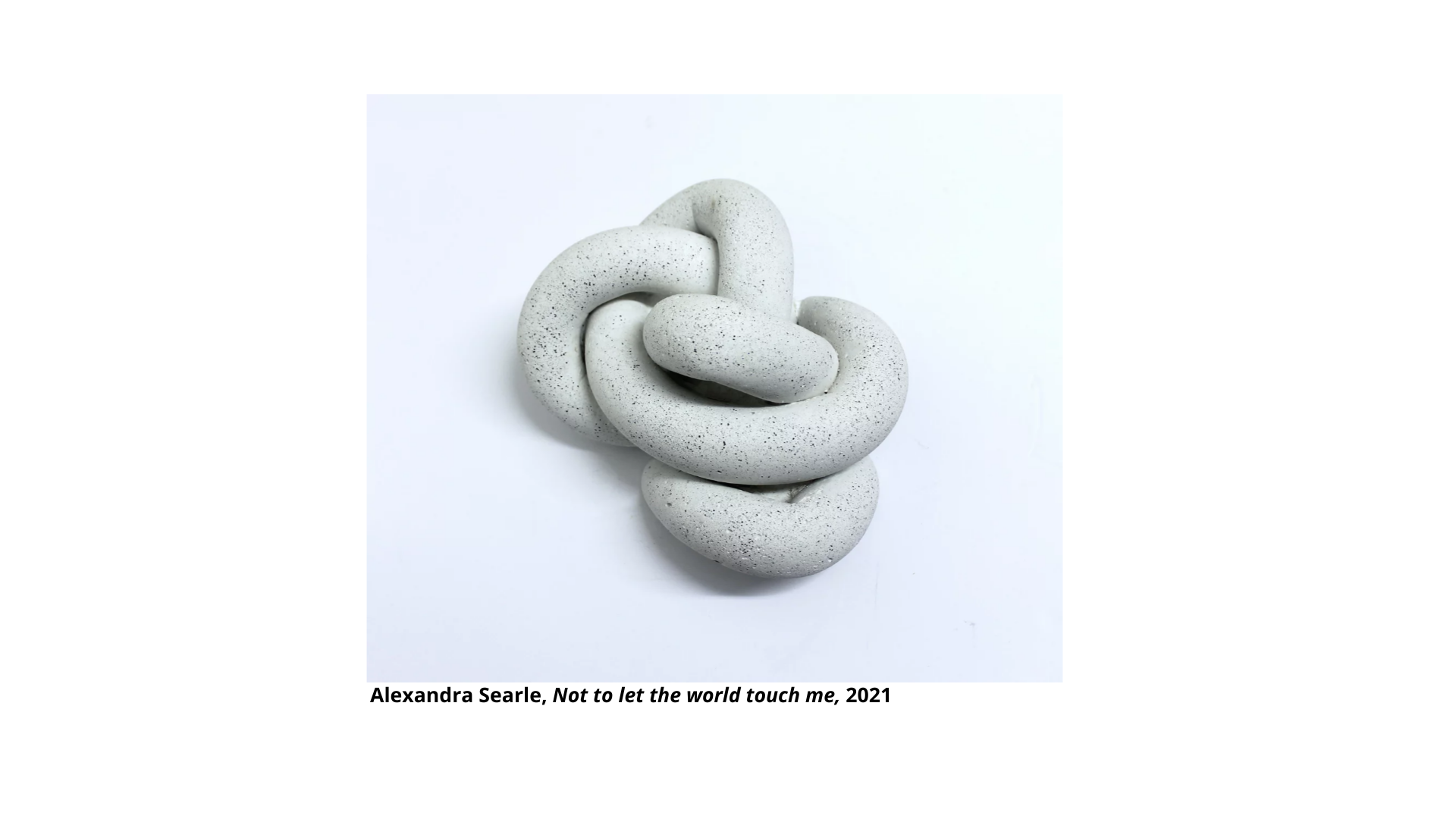 Hugo Lami’s work peers into the digital and virtual absurdity of contemporary culture, evoking our social dependency on technological devices and social media. His paintings portray editable environments of 3D construction software, with the purpose of re-embodying virtual tools. The sculptures and installations, on the other hand, investigate the hardware of our technological evolution and by fusing concepts and objects, while displacing them in time, the works create innovative narratives of possible Utopian and Dystopian futures that could quite easily become a reality. Lami says: ‘I love technology, but I also hate it. Every new device gives me hope that maybe that’s the one that is going to change my life. It never is'.We are proud to say that Hugo Lami was the irrefutable winner of the 2021 Neon Gallery Art Award. 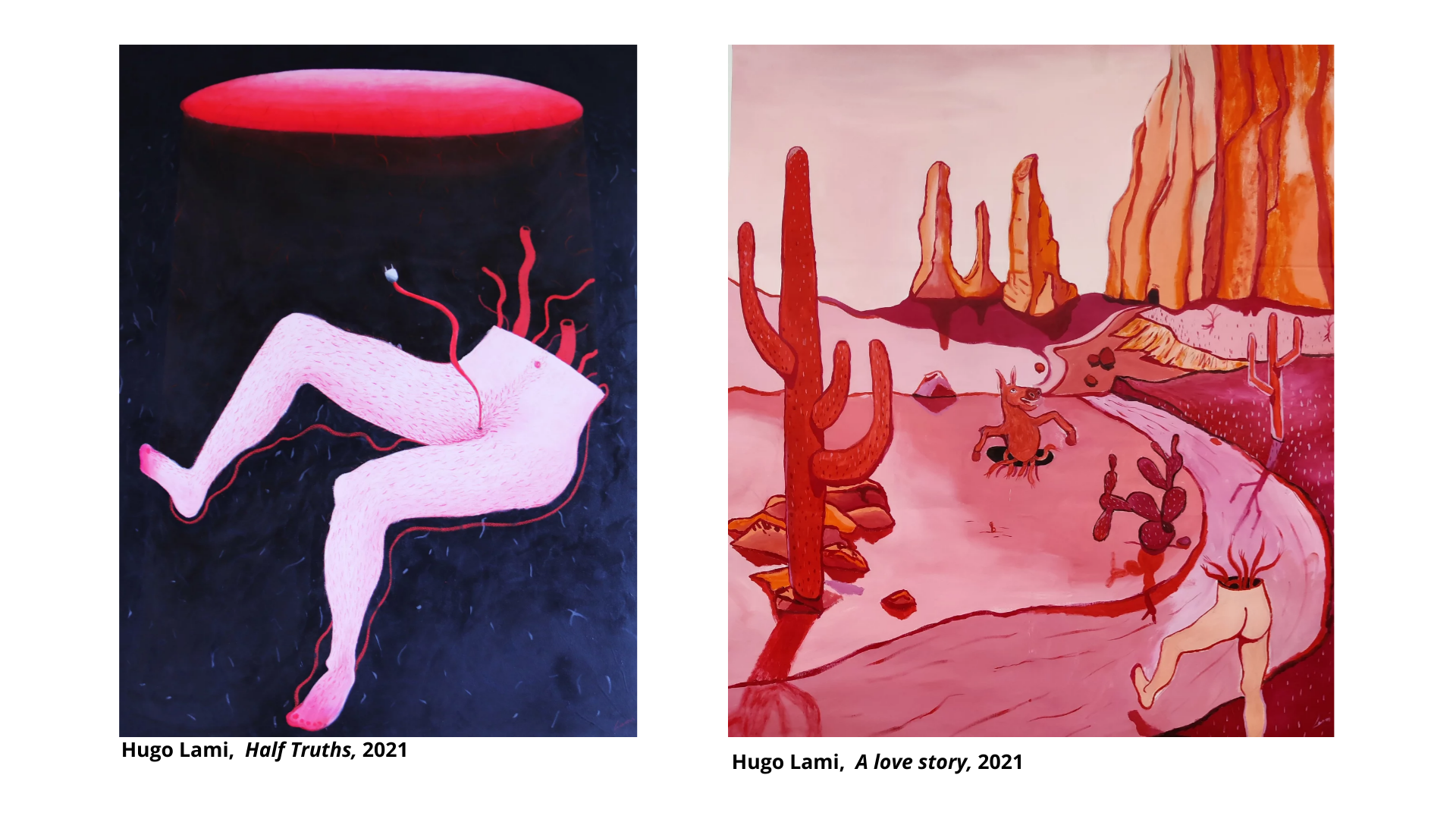 For painter Gary Komarin, abstraction has never been a formal dead end. Rather, it has allowed him to challenge the limitations of the style–to make painting ‘include more’ precisely because a recognizable image excludes too much. Komarin has been called a “painter’s painter.” His status in this regard is based on the authenticity of his work, its deep connection to the tradition of modern painting as well as its sustained individuality as an utterly personal voice.eing an artist of the 70s New York Era, Komarin has shown with the likes of Jasper Johns, Basquiat, Motherwell, De Kooning and Francis Bacon and many more. 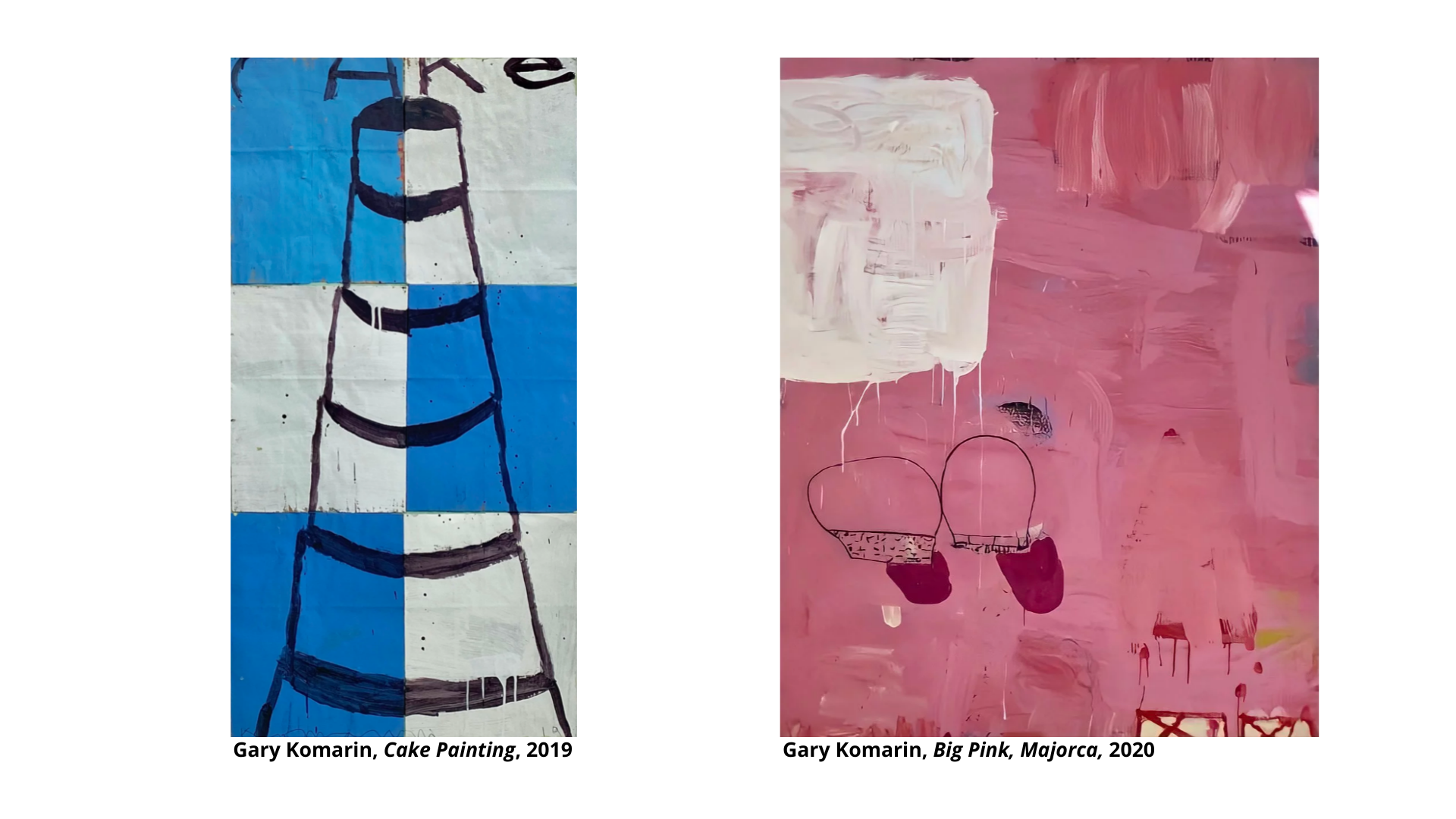 Simona Sharafudinov was born in Lithuania, relocated to the UK at an early age she takes photography and personal experience as points of departure, to trace displaced identity and the sentience of being through performance and image- making. She lives and works in London. She received her MA in Contemporary Photography from Central Saint Martins in 2017 and was the recipient of the 2017 Tiffany & Co. x Outset Studiomakers Award. 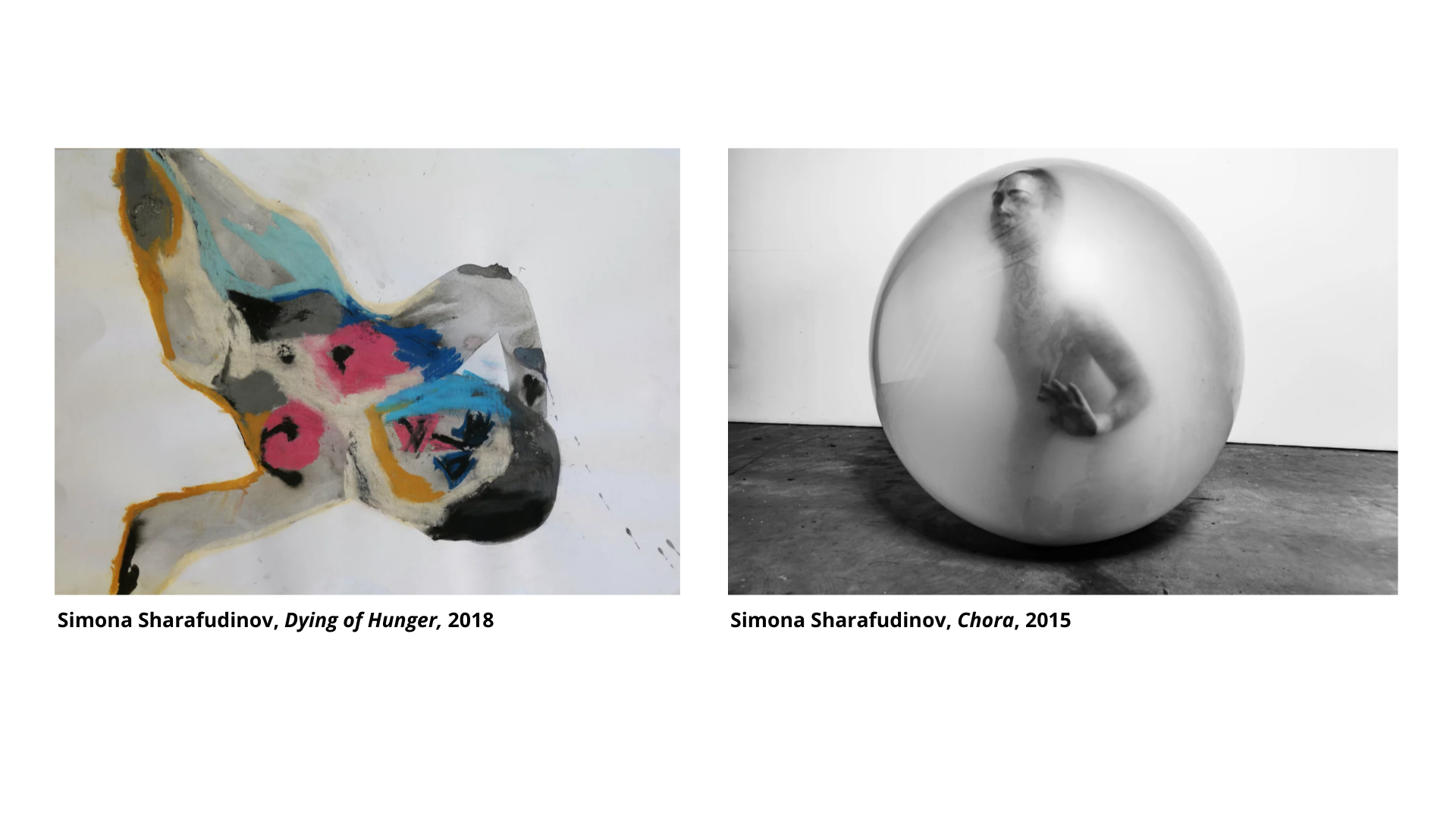