“Imagine a city where graffiti wasn’t illegal, a city where everybody could draw wherever they liked. Where every street was awash with a million colours and little phrases. Where standing at a bus stop was never boring. A city that felt like a party where everyone was invited… Imagine a city like that and stop leaning against the wall - it’s wet”

Apparently born in Bristol in 1975, Banksy's location as well as real name is not publicly known. Little more can be added to the plethora of information currently available on the artist known as Banksy. Google the name and it would take some time to disseminate all the data surrounding him and his work, be they street pieces or gallery canvasses and screenprints. Artistic genius, political activist, painter and decorator, mythic legend or notorious graffiti artist? The work of Banksy is unmistakable, except maybe when it's sitting, uninvited, in the Tate or New York's Metropolitan Museum.

Banksy is responsible for decorating the streets, walls, bridges and zoos of towns and cities throughout the world. Witty and subversive, his stencils show elephants with weapons of mass destruction, policeman with smiley faces, rats with drills and umbrellas. If you look hard enough, you'll find your own. His statements, incitements, ironies and epigrams are by turns intelligent and cheeky comments on everything from the monarchy and capitalism to the war in Iraq and farm animals.

His identity remains unknown, but his work is prolific. His auction records speak volumes for the popularity of his art which is included in some of the most important private collections in the World.

Artificial Gallery is bringing to you some of his most iconic works and motives, that are highly sought-after and a great addition to every collection. 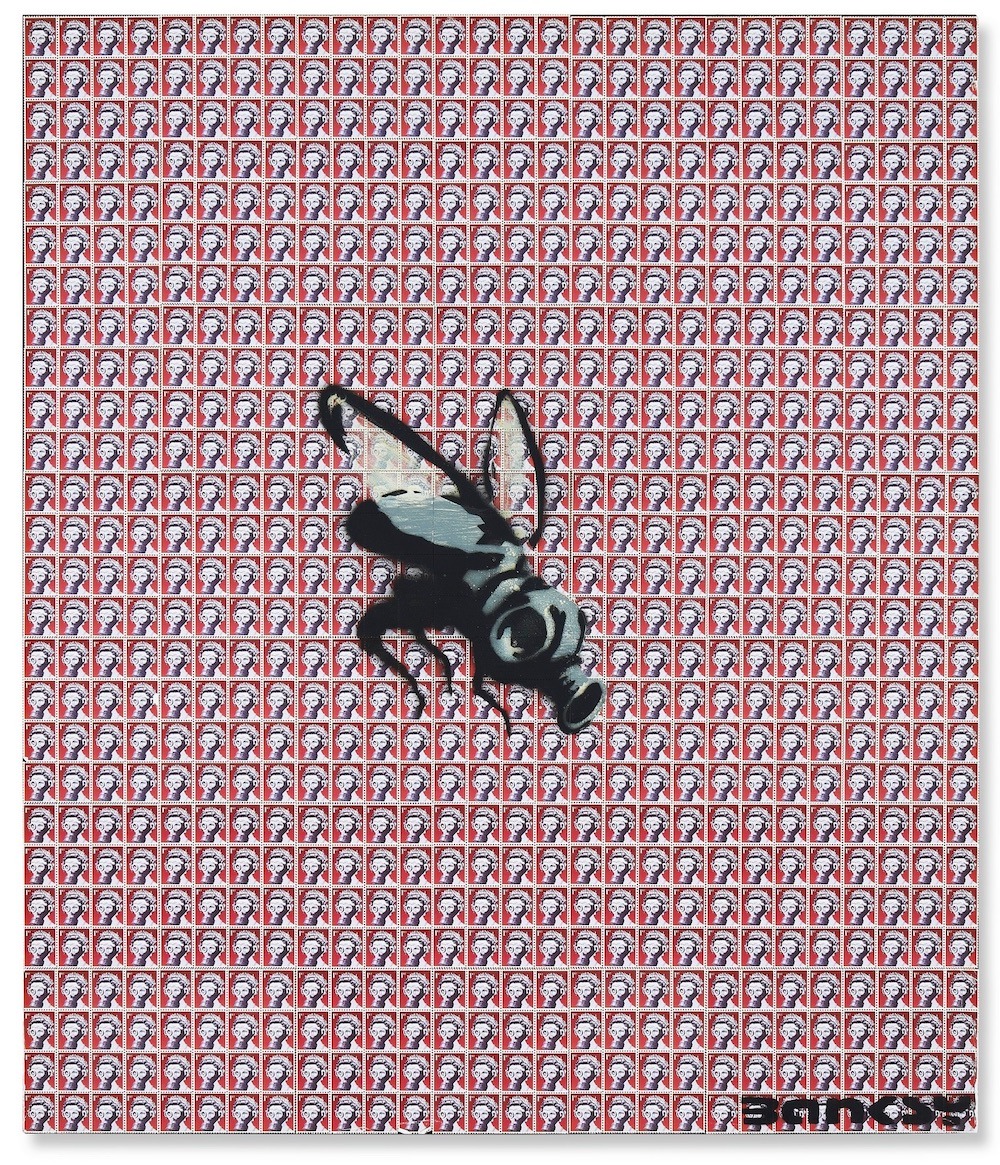 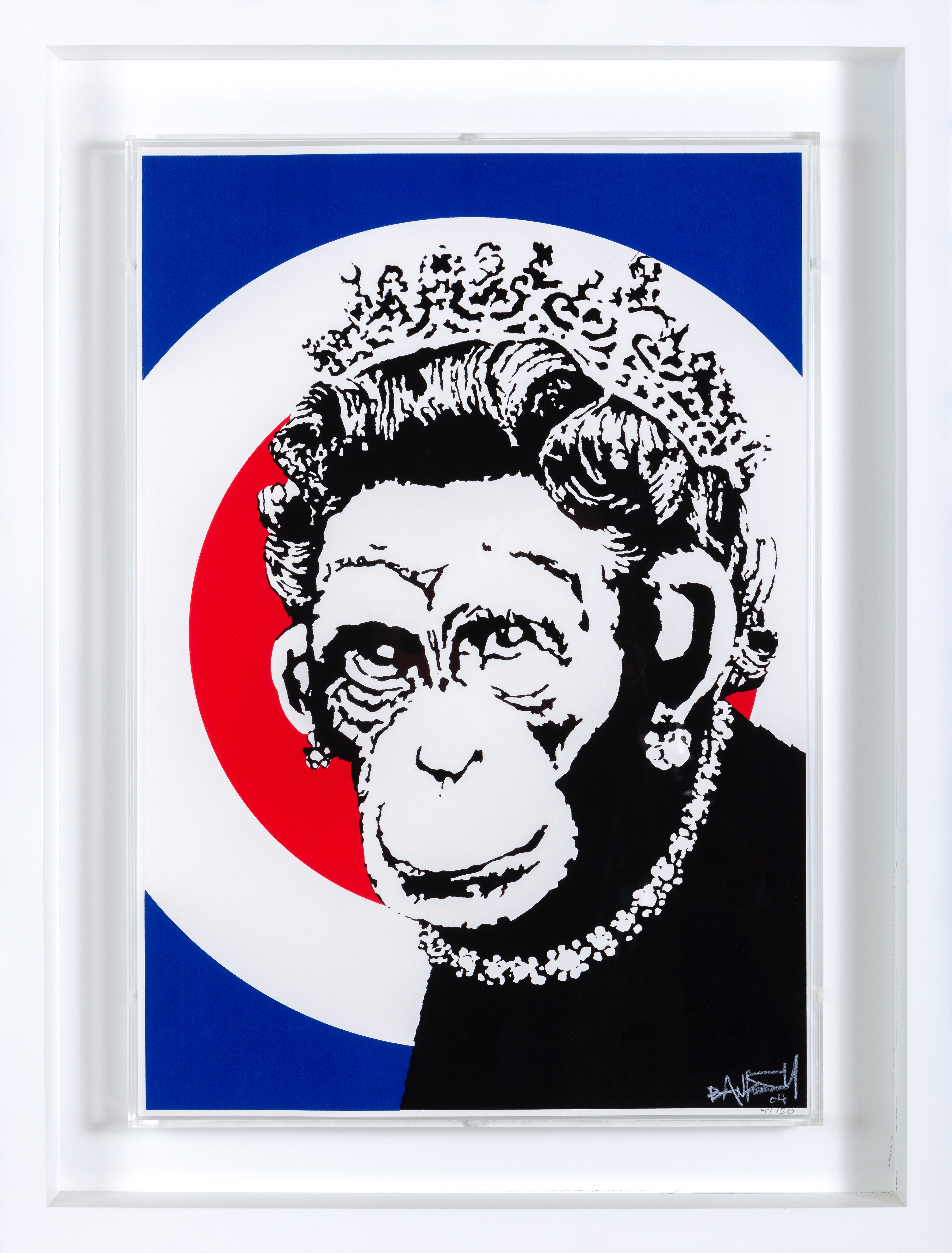 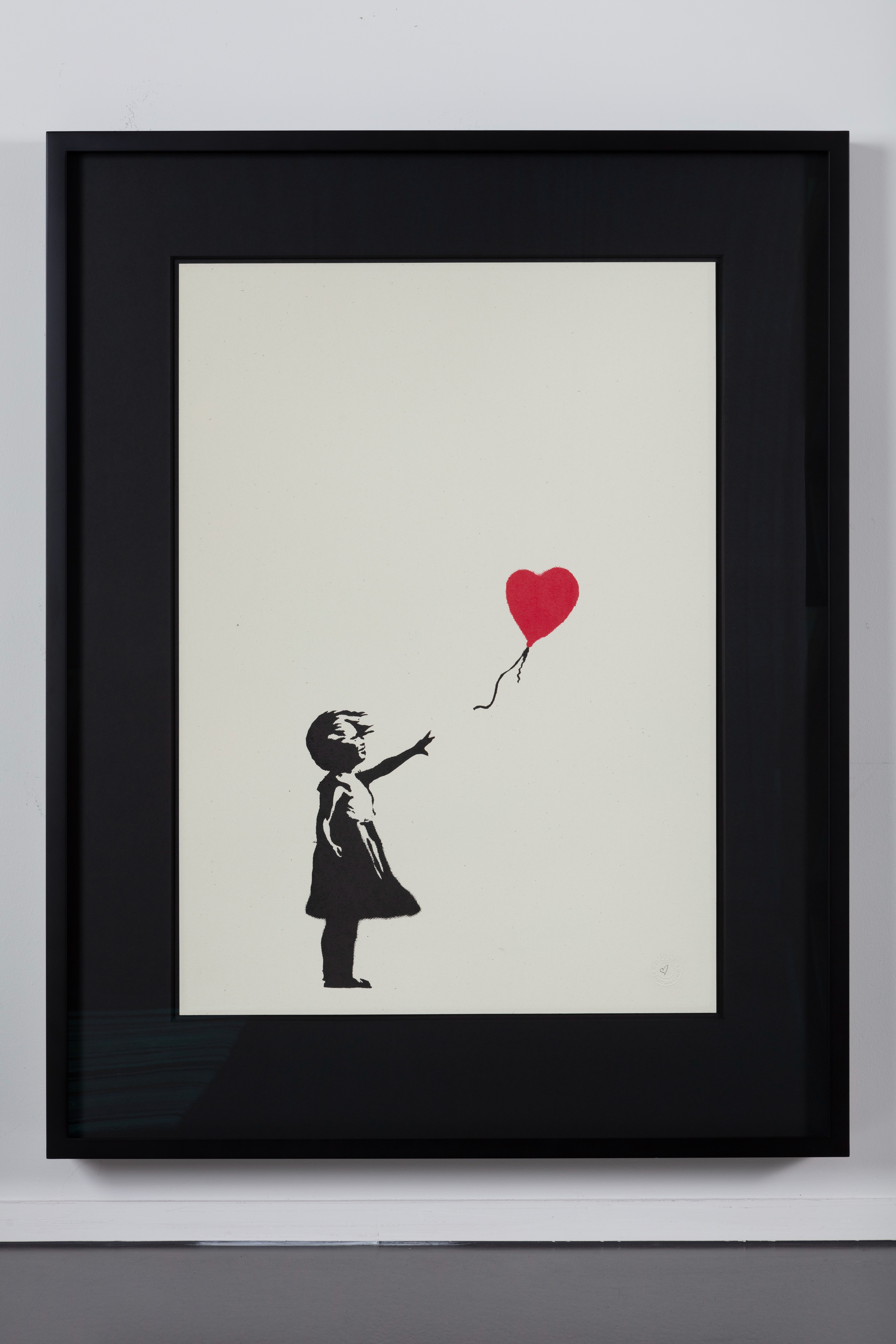 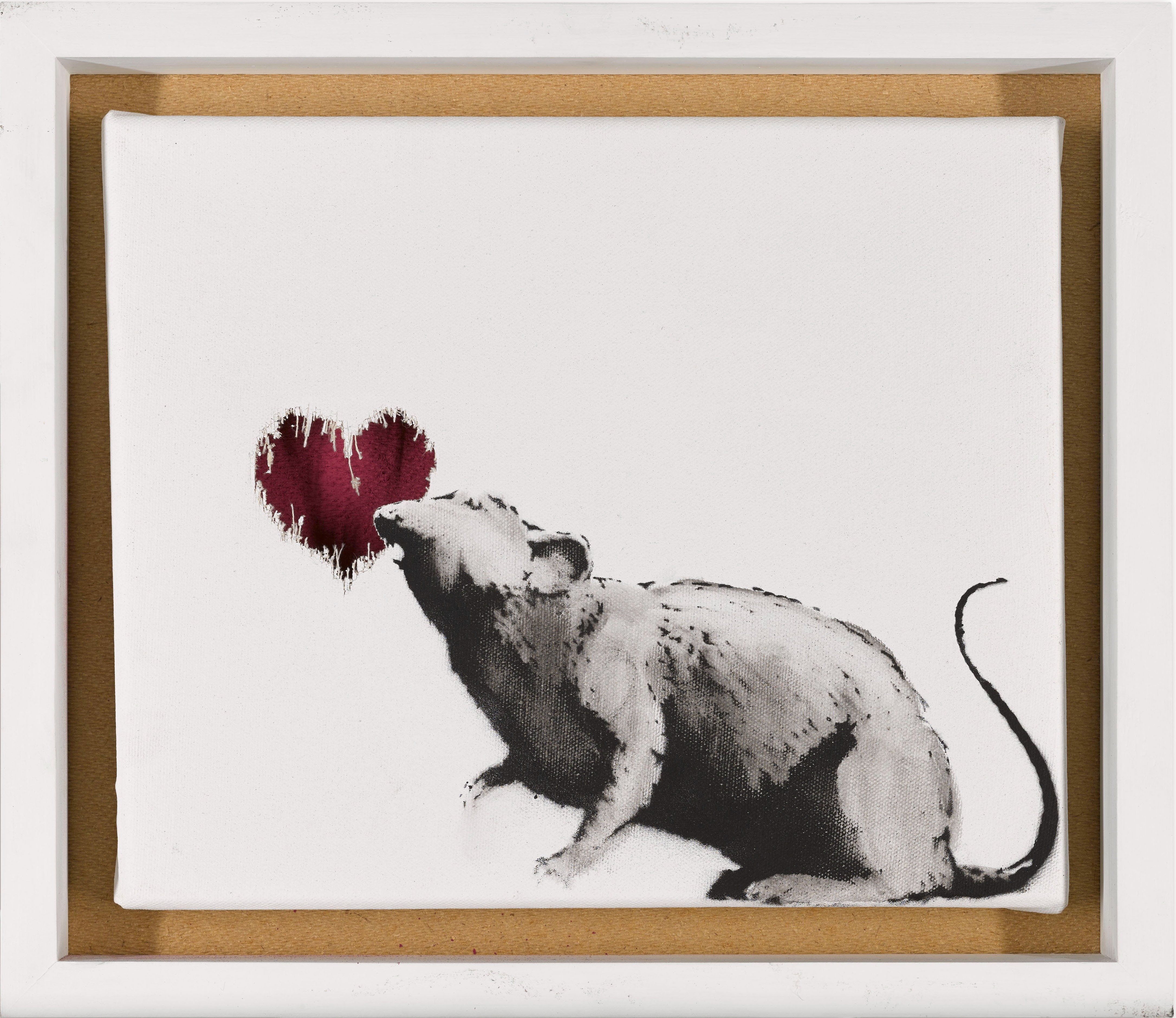 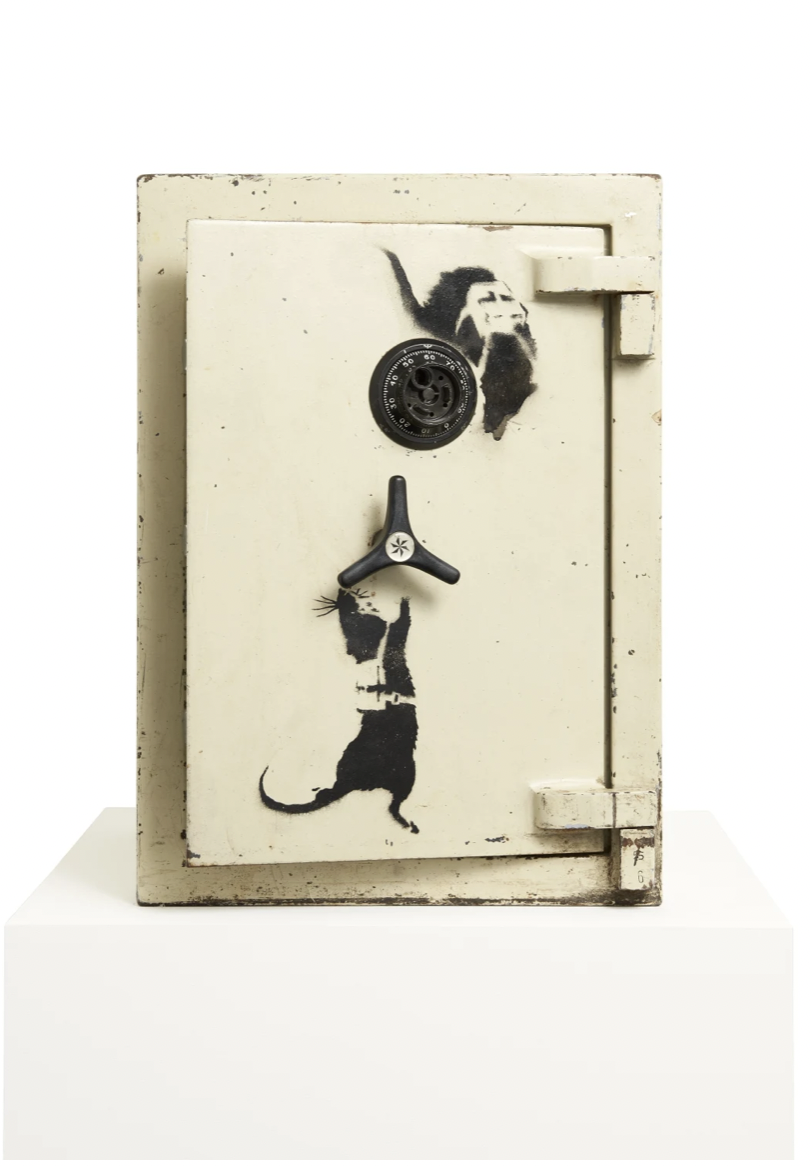 "They exist without permission.
They are hated, hunted, and persecuted.
They live in quiet desperation amongst the filth.
And yet they are capable of bringing entire civilizations to their knees.”

Rats are one of Banksy's significant motives and continuous source of inspiration. They are used allegorically both as anagram of the word 'ART', and as a symbol of the vices of the human race and those who suffer treated as 'lesser than' in the darkness. For Banksy, the rat is paying homage to the graffiti artists and ,therefore, himself, who tend to appear at night, hidden in the darkness and are hunted down by the authorities, treated almost like pests.  By giving the figure of the rat a voice, the artist is making a strong comment on the oppression and exclusion that is generated by the endless competition and consumerism fuelled by capitalism. 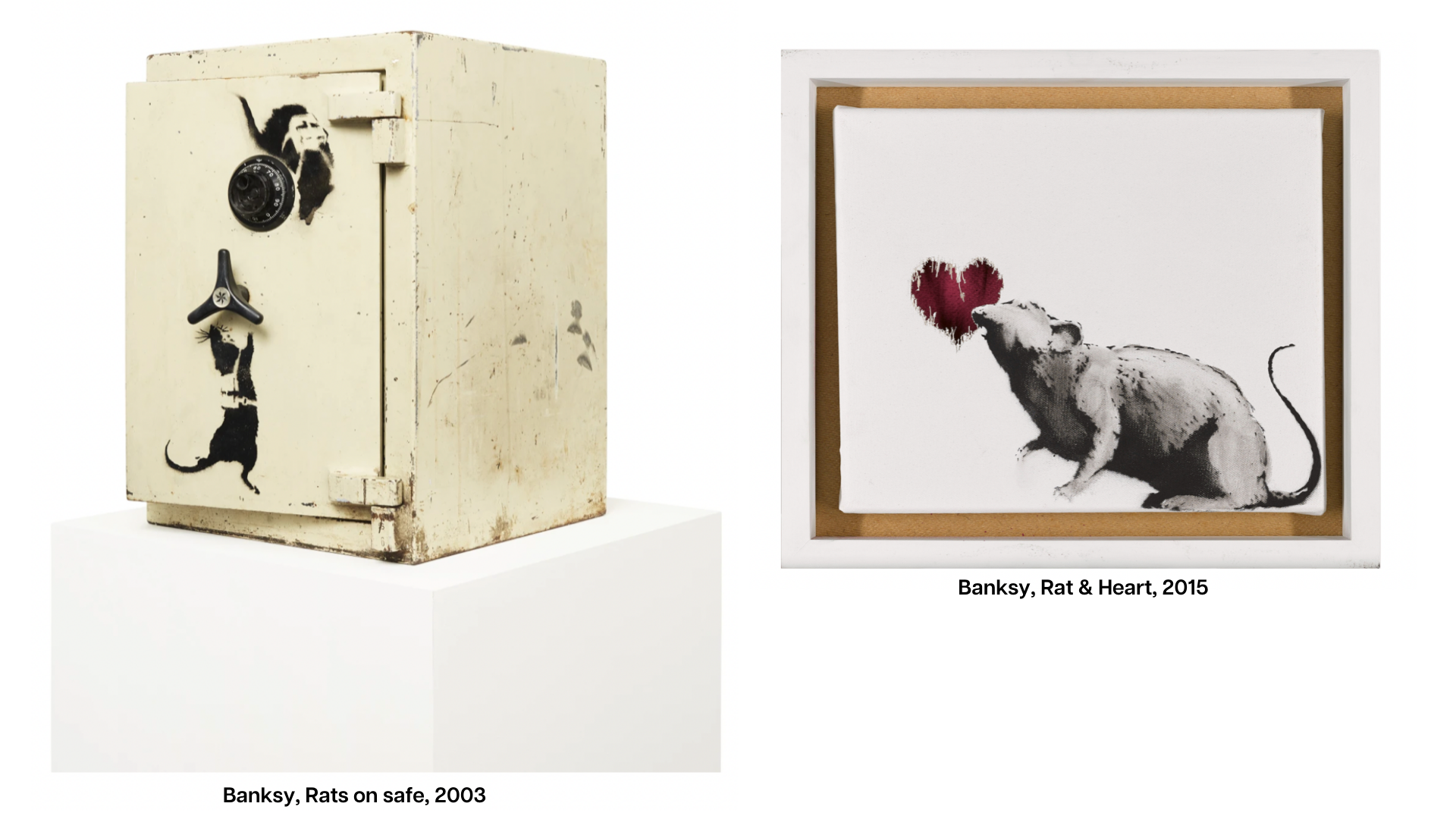 ‘Celebrate the fact the highest position in British society is not a reward for talent or hard work, but simply handed out with the accident of birth. God Save The Queen.’

Continuing his tradition of using animals as allegories, Banksy utilised the primitivism of the ape, when referring to the Queen. Banksy's message is very direct: the country is run by apes. Apart from the rat, the ape is a frequent theme in Banksy's oeuvre: From Laugh Now, to Keep It Real, or Monkey Detonator, monkeys are also a way for Banksy to express his own frustrations with human-kind. For Banksy, the ape is the tool of his critical social commentary and a satire of the human nature. It is no accident, that the most expensive artwork by Banksy sold at auction is no other that Devoted Parliament: a giant British parliament run by monkeys. 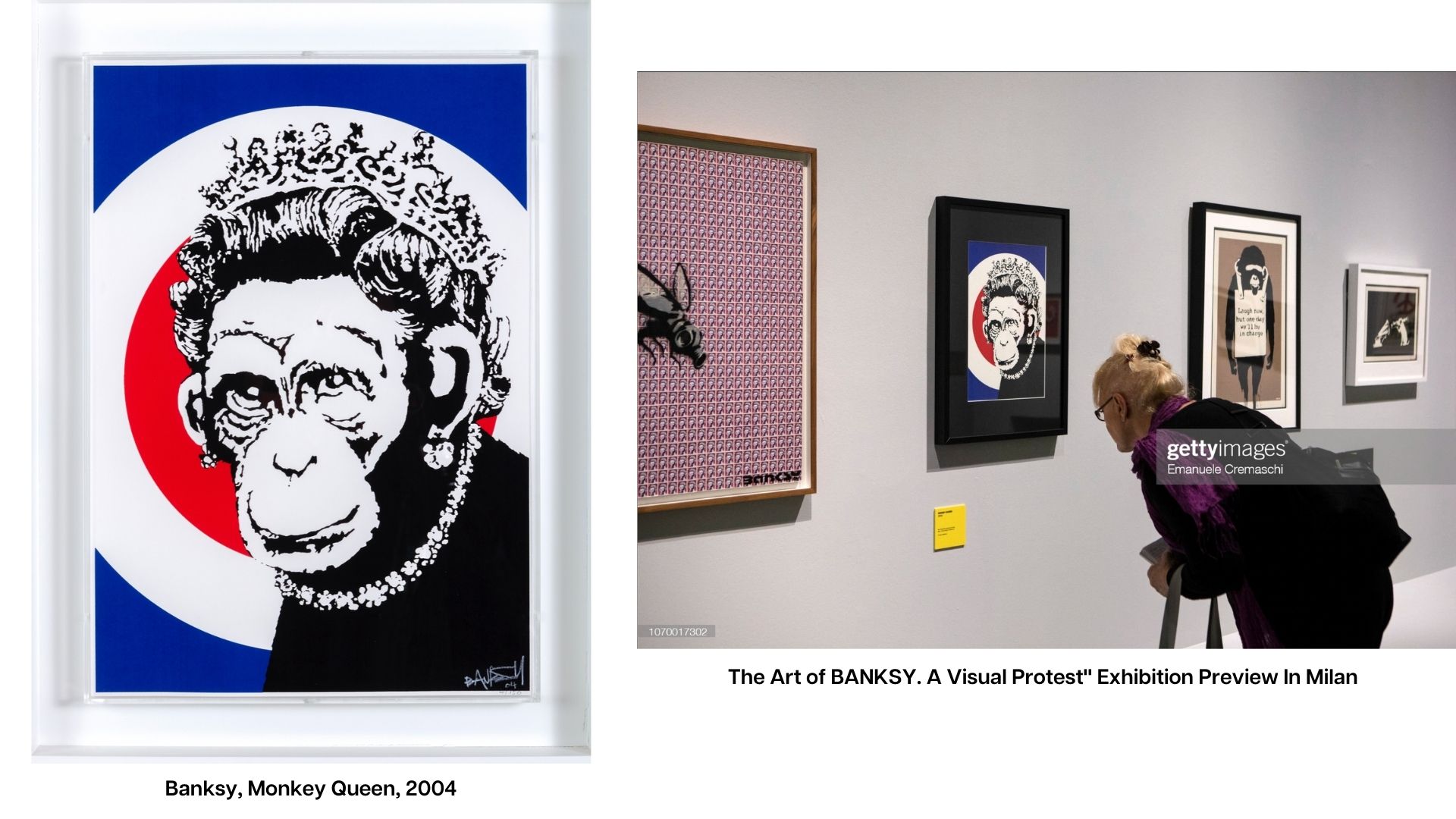 This image of the queen used for his provocative and controversial Monkey Queen artwork is now becoming the background for another recurring protagonist in Banksy's oeuvre: the mosquito.The frustration with humankind is once more evident in Banksy's work. The Mosquito for Banksy is both a villain and a victim: it is a play on the perception of the blood-sucking insect which exists in the human mind, and a criticism of authority, violence and militarism. Just as the mosquito, countless desperate soldiers fighting in war, are caught and suffocating between duty and morality. 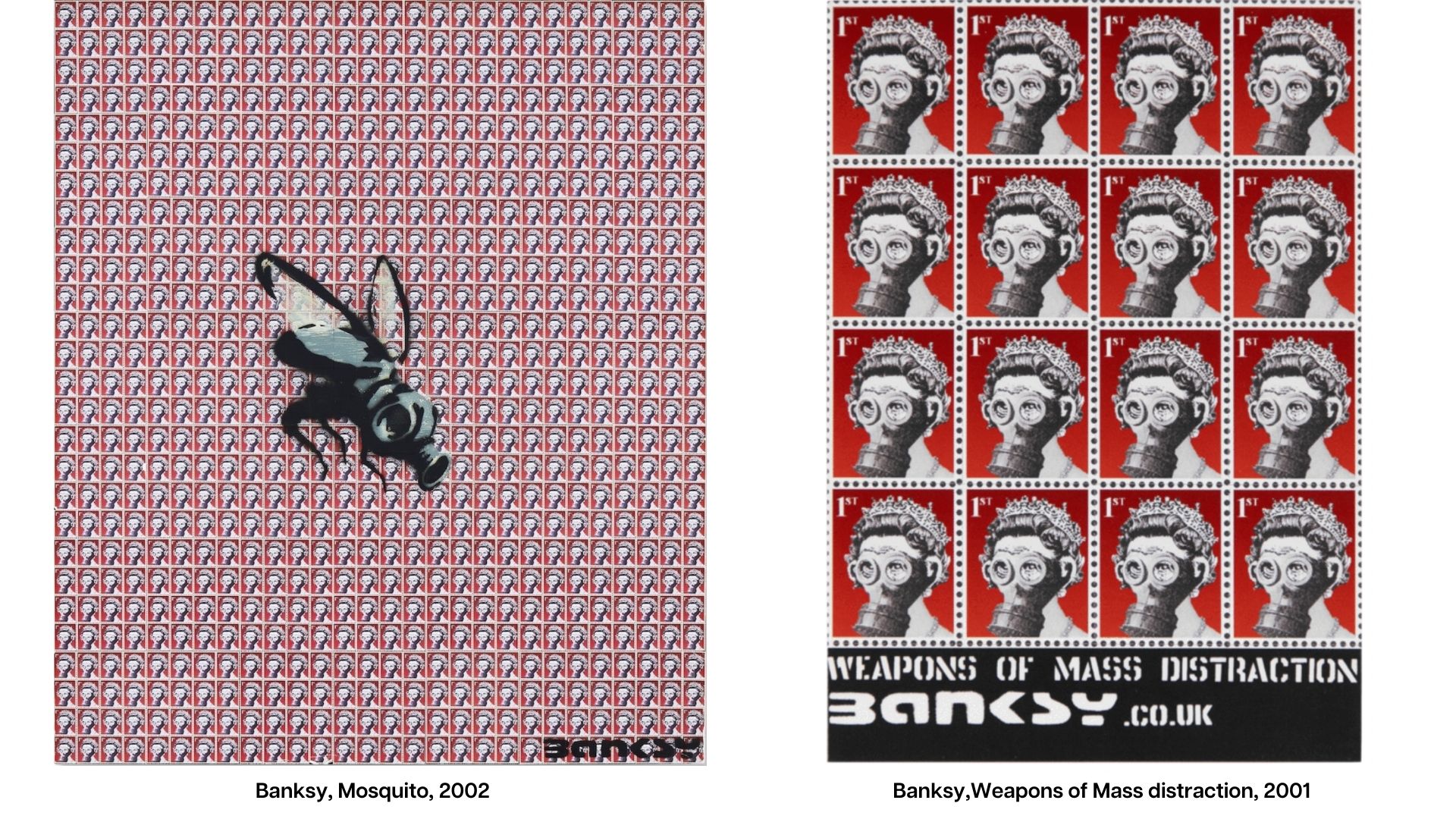 Girl With Balloon is one of the most sought-after Banksy images for collectors, old and new. Once more, Banksy believes that the power is in the eye of the beholder. What do you see? A red heart-shaped balloon that has been universally recognised as a symbol for dreams, aspirations, hope, and a girl who either struggles or is about to catch the balloon, symbolising the childlike purity. Whether you see the girl losing or grabbing the balloon, the artwork can be viewed as loss of innocence, or arrival of joy.

This work originally appeared in London’s Southbank accompanied by a quotation that read, 'there is always hope' and was meant to be covered up by the local council, however the work became the subject of the most talked about public art stunt in history in 2018. A Girl with Balloon shredded itself while in auction and just as the hammer came down on a final £1.4 million bid at Sotheby's Evening sale. Prank or Protest? Who knows, but one thing is certain: The Girl with Balloon is 'going,going,gone..' down in history as the first ever artwork created in an auction room. 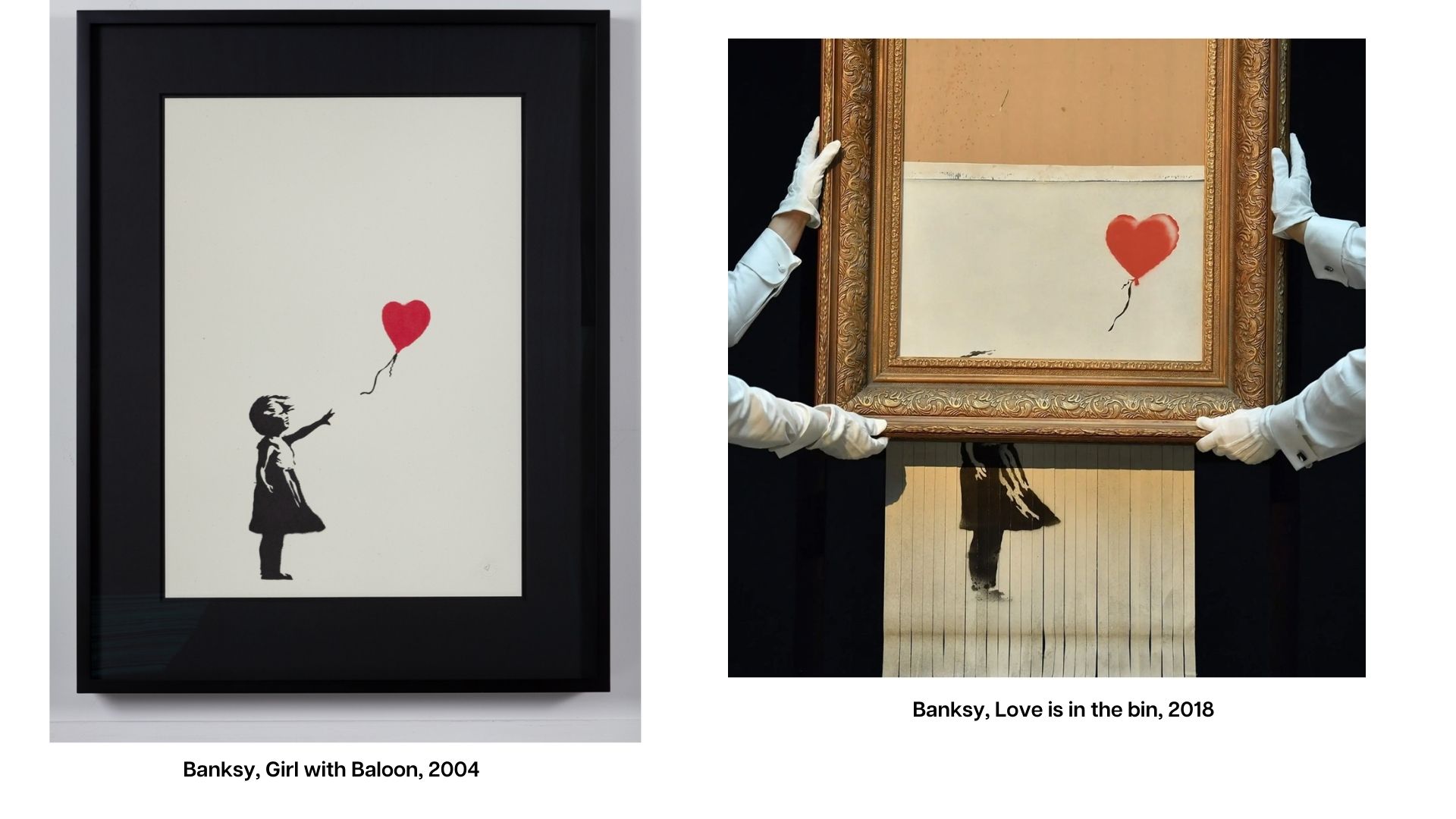 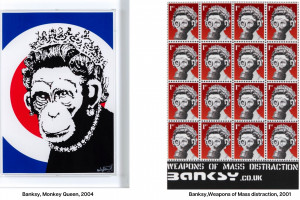 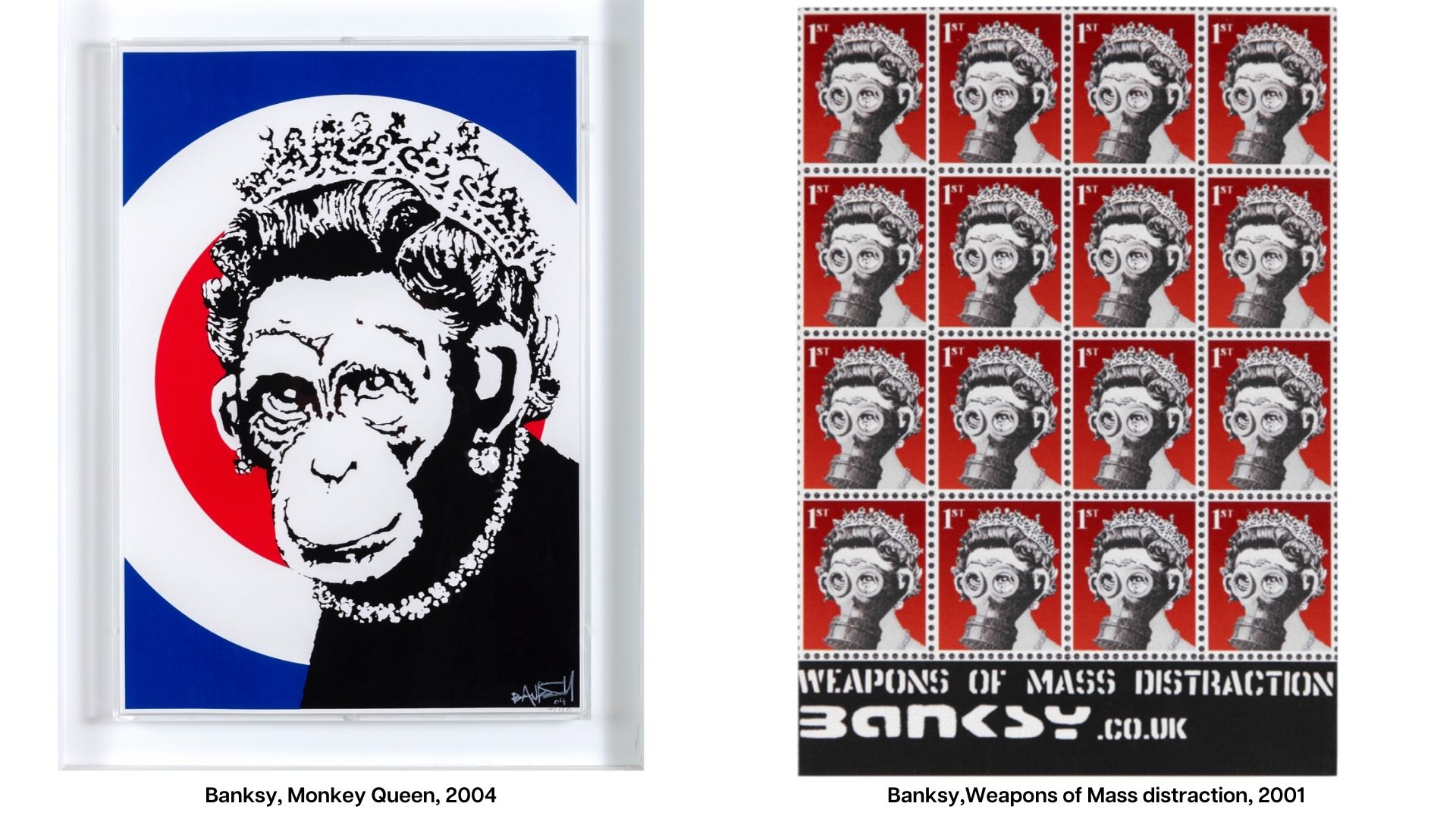