This exhibition brings together three women artists, Susannah Fiennes, Eugenie Vronskaya and Lucie Winterson, who have never exhibited together before.

Each artist is connected to Nature not only through their abstracted depictions of settings and backgrounds, but practically too, as a place of refuge from the distractions of city life. All three divide their lives between London and the country, the latter being where they can more effectively channel thoughts and feelings into their paintings: Susannah in Wales and Oxford; Eugenie in Scotland and Lucie in Devon. Rural environments permit peace and solitude, which enable the artists to summon the rigour, total commitment and dreaming time needed to produce works of intensity and mystery, qualities common to the output of all three.  As the artist Gwen John once said: ‘One can only get to Heaven alone.’

Naturally, there are differences too. Eugenie and Susannah often include unidentifiable diaphanous figures in their compositions whereas Lucie’s paintings are devoid of any obvious sign of human life. Her work is concerned with ecology and reconfiguring our links to the vegetal, the world itself and the life force of trees and plants.  Eugenie and Susannah may personally share some environmental concerns, but not as a dominant feature of their artwork.

All three artists align in having a deep understanding of the non-verbal language inherent in their work. For each one, individually, creating a painting is a journey made up of memories and experiences, during which the past and present are distilled onto the canvas or board in an attempt to capture something ineffable.

Lucie Winterson’s series of paintings derive from a month spent in the rain forest, under its canopy, immersed in shades of blue and green.  Comprising overlapping leaves and branches of native trees, the canopy is one of several vertical layers of the forest drawing the eye upwards.  Yet this dense foliage of multifaceted shapes and shades allows shafts of light and colour to penetrate to the floor where one catches glimpses of darting, shimmering blue, green, ruby and purple humming birds, blue morpho butterflies or dazzling variegated flowers.  The iridescent scales of butterfly wings, the sleek feathers of tiny birds and the smooth, soft matt or glossy petals refract strips of sunlight creating sudden almost blinding moments of opalescence, as represented in Phusis (2022) and Mind of Plant (2022). 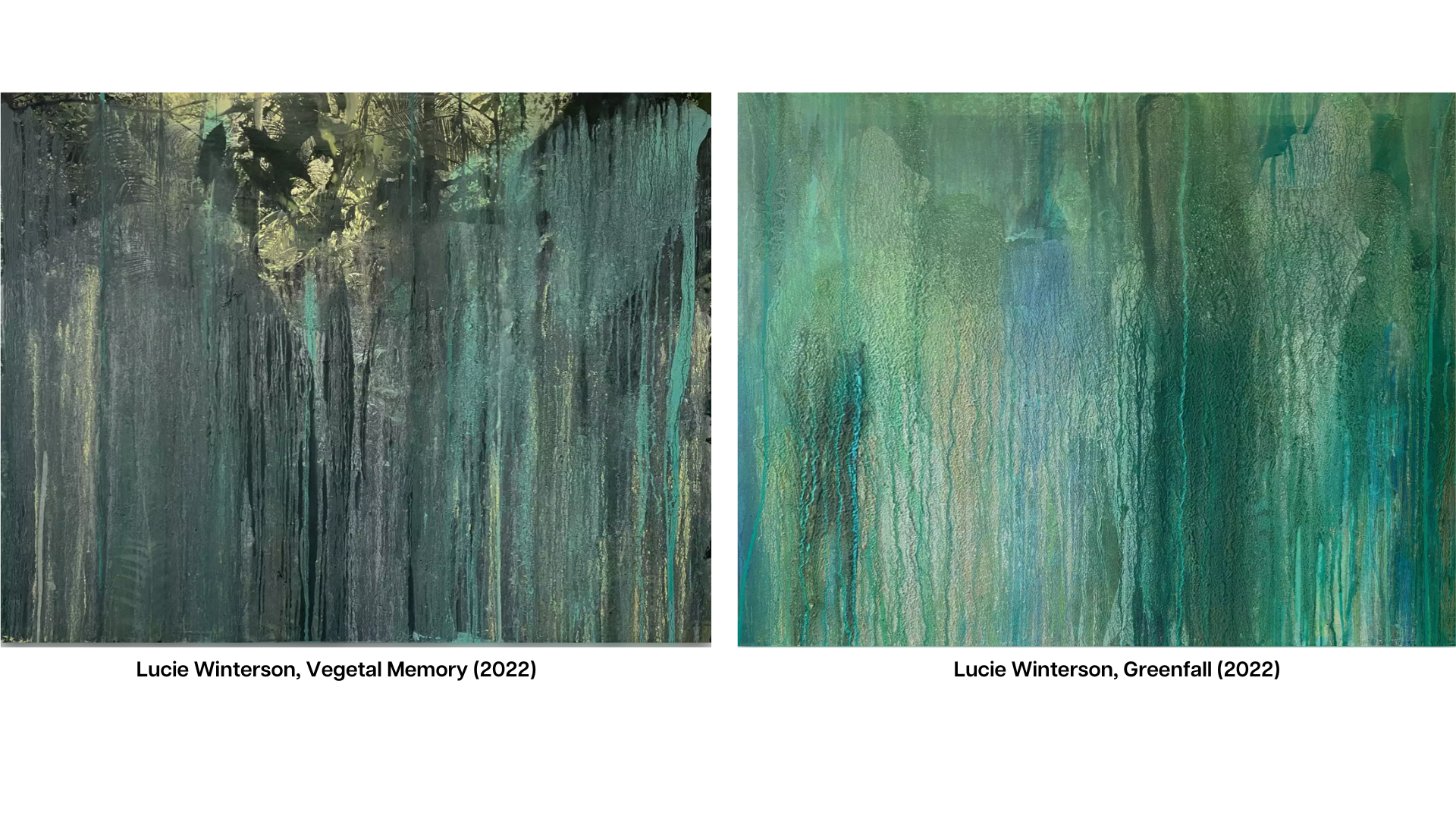 The vast mass of forest vegetation with its sudden revelatory illuminated moments corresponds to human memory whereby an enormous storehouse of material features unexpected lapses and retrievals, as we recall or forget seemingly at random.  Lucie’s paintings connect layers of being with layers of memory, and attempt to find some communality between the artist and vegetal, organic matter.  Immersion in one of the world’s most bountiful natural spaces, mostly devoid of human life but abundant with other life - animal, mineral and vegetable – commences the process.  Using photography as the artwork’s foundational layer, Lucie records aspects of her journey: the rain, the damp leaves and tree trunks, sunlight sluicing through the canopy, the close-up and the long-range views.  Upon the base, she adds other materials, sand and clay and paint.  In Vegetal Memory (2022) there is a sense of opacity, verticality, flowing and falling.  In person, the textural, three-dimensional qualities are very evident, and give the viewer the impression of being deeply inside looking outwards. 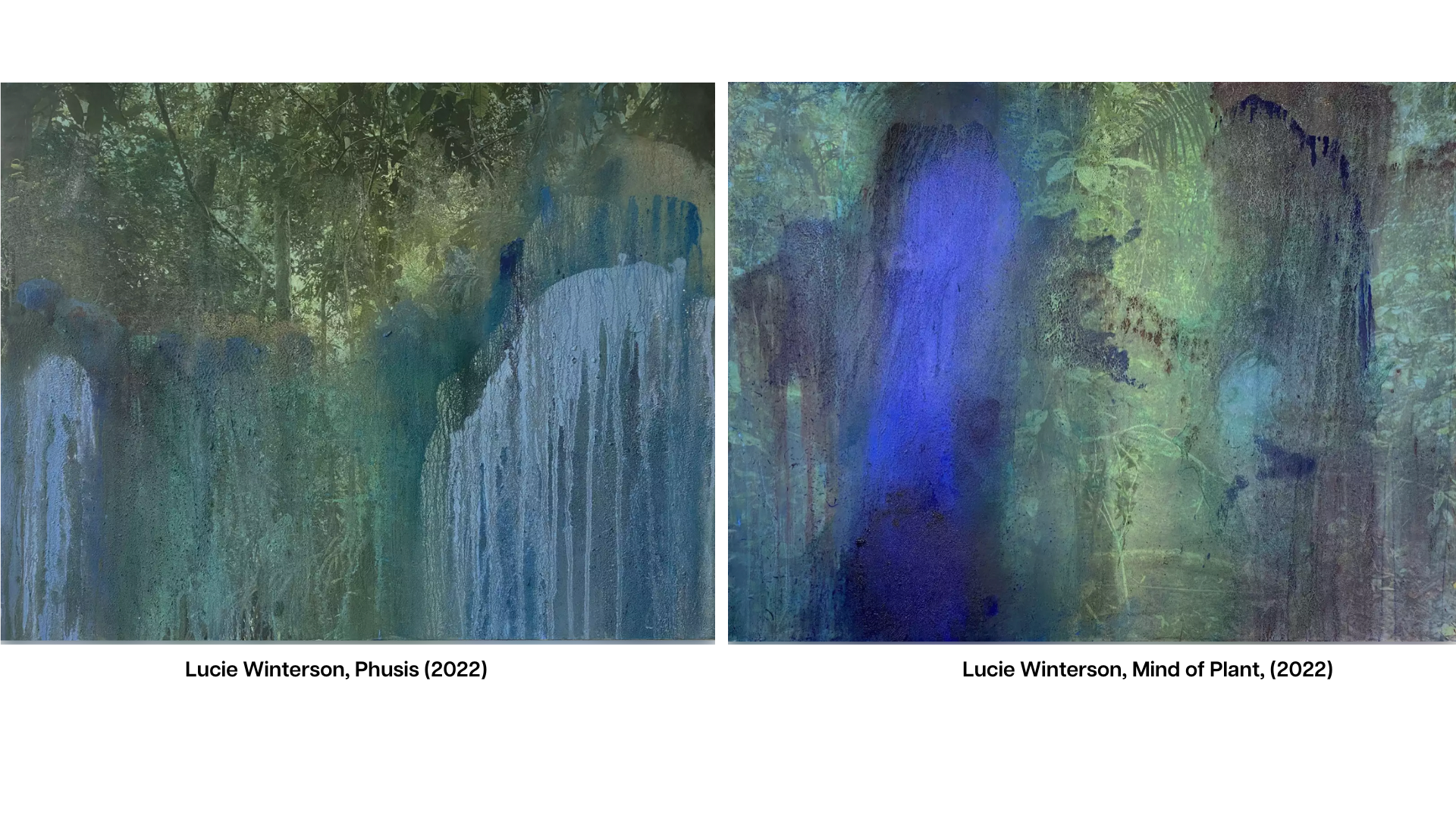 Water in the form of rain, vapour and lakes features in Eugenie Vronskaya’s work, for example, in Apparition, Immersion and Mist, but not literally depicted weather as part of a landscape scene: ‘I am not attracted to paint landscape as such.  When I look at it, I love it, and enjoy being there, yet it does not bring this other in me …’  In searching for her own, ‘other’ now very recognisable, visual language Eugenie creates ambiguous, otherworldly locations in which figures or objects occasionally appear, a trait shared with fellow artist Susannah Fiennes.  Perhaps a horse, or a house amid some bright green leaves; sometimes a pale, attenuated human form set against wispy trees or a distant hillside, all seemingly dreamlike, slightly hidden and barely there.  During the peak of the global pandemic in 2020 – 2021, Eugenie stayed at home in the Highlands of Scotland,becoming more absorbed in the surrounding ever-transforming countryside. The seasons slipped by, communication was limited, time elongated and drifted and thoughts did the same.  It was this period that gave rise to the paintings she is showing in this exhibition. The fragile, translucent figures in their mutable settings suggest the passage of time, a sense of isolation, looking out and painting alone.  These subjects - combinations of imagination and reality - rendered in pigments that form a crystal-based surface of semi-transparency and light, appear to float above the surface. Eugenie uses materials and pigments often associated with icon painting, and her strict, classical art training did indeed include icon painting techniques, which she has retained up to a point, but evolved to serve her pared-down, semi abstract, more experimental style of working. While looking at this set of paintings the viewer is taken to a place of disappearance, akin to where an artist goes during the act of painting, described by Eugenie as ‘time out of time’. Philip Guston speaks of a similar state, referring to ‘studio ghosts’, whose voices are ringing in the artist’s head: ‘When you’re in the studio painting, there are a lot of people in there with you -  your teachers, friends, painters from history, critics… and one by one, they walk out. And if you’re really painting, YOU walk out.’

Susannah Fiennes’ relationship with Nature is more tangential than that of her co-exhibitors.  Only two of the paintings on display have a building in the background but, even then, as in Tree against a Blue Sky, equal prominence is given to the natural elements, theblue sky and blue water, while the tree in the foreground dominates the composition, and dwarfs the building. The highly-stylised tree, with its balloon-like shape forms a protective umbrella over the diminutive person beneath it, who appears rapt in contemplation or sorrow.  Similarly, the intriguing and powerful edifice in Figures with Morning Light, monumental and looming over two spectral, scurrying people progressing along the water’s edge, speaks of a rural setting, a notion reinforced by the use of restrained, muted and delicate colours.

While nature is never far away, of far greater interest to the artist is the geometry of structures and gestures.  Several of Susannah’s works show unidentified individuals leaning forwards with arms outstretched, seeming to implore, cry out, perform a task or gaze upwards in wonderment.  The narrative of their actions remains elusive but the shapes they form, particularly triangular ones, is one of the artist’s longstanding preoccupations. As she said: ‘In the simplest of gestures there is an underlying geometry through which feeling emerges.’ In Evening Light 2001 – 2022, we witness a quiet moment of someone lighting a fire, an everyday, mundane task yet, bathed in the pink-orange-yellow light, the image takes on a religious quality, almost a depiction of someone worshipping at a crib, gesturally nurturing, encouraging and comforting.

In common with Lucie and Eugenie, Susannah works in layers, but inconspicuously and visually unapparent.  Her paintings often conceal other workings on the canvas beneath the image visible to the eye, or they contain major modifications of the original, retained but indiscernible to all but infrared analysis.  Each artist shares the process of detoxing aspects of what has gone before and crystalising it into a present form, and what unifies them completely can be summed up in Susannah’s statement: ‘It’s important to love the paint and let the unconscious speak’. 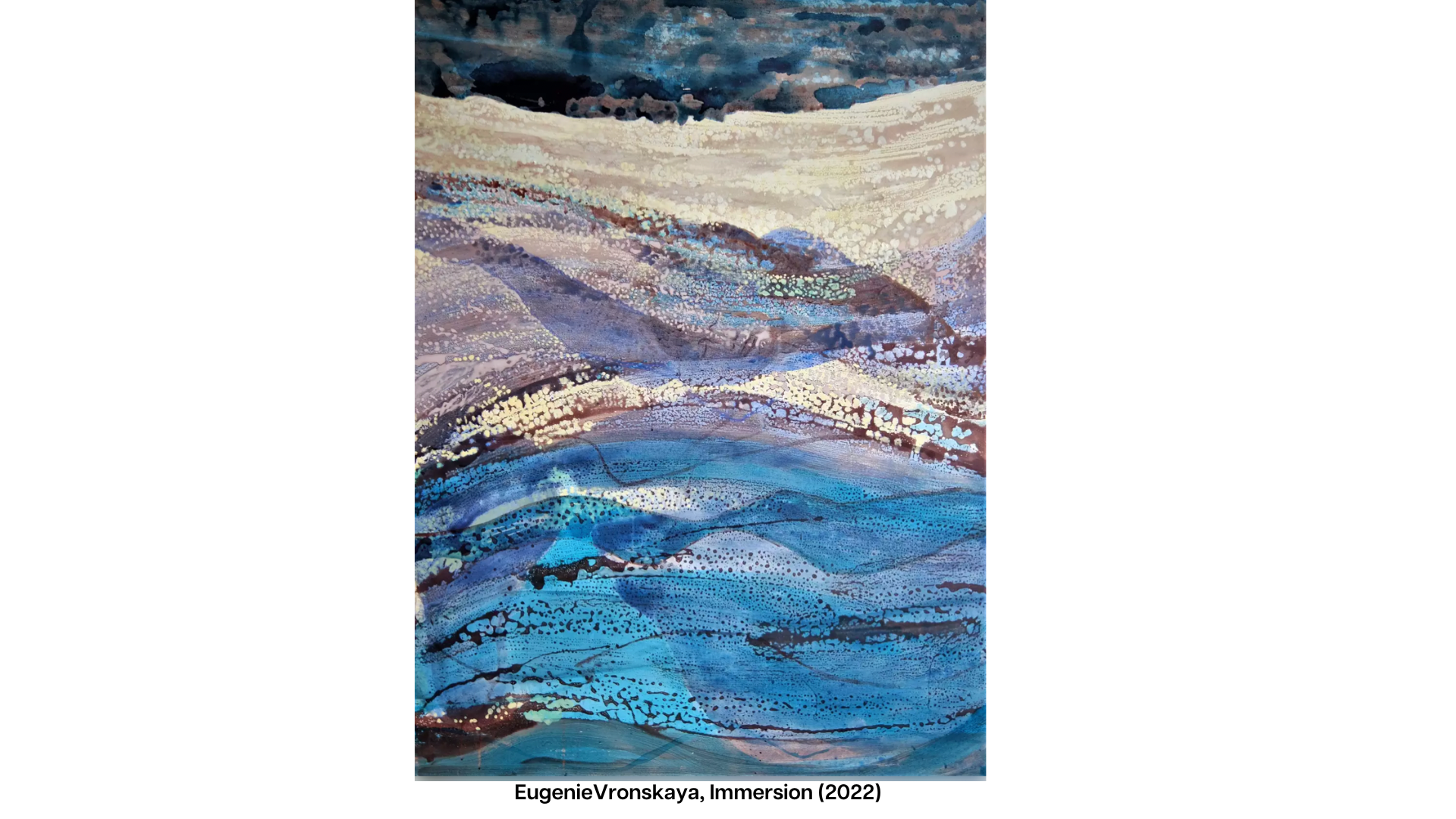 After the Fall, Rainfall

The Way of the Air

The Memory of a Dream

Shadowiness of the Still House