Login Sign up
It Always Rains in the Lakes
Summary

‘It Always Rains in The Lakes’ is a series of ‘non-portraits’ of Roberts’ mother, who died recently. They have her red hair, says her daughter, but don’t otherwise resemble her. But Roberts’ mother also stands in for the conditions faced by many women of her era. As Roberts puts it: ‘my mum was an amazing person in so many ways – and very talented in painting and music. But a woman of her generation and class – raised in farming community in the Lake District, married young to a farmer – didn’t have opportunities such as going to Art College. She never had the chance to develop her talents, and that was a huge sadness for women of her class in that generation’.

From What to How and Back Again

What is painting good at? In between the limiting cases of extreme photorealism and rigorously controlled abstraction, it excels in generating a back and forth between our awareness of paint and our awareness of subject: there’s something satisfying about how we see simultaneously both what it shows, and how it is made; about how the eye prioritises first one and then the other. That satisfaction is enhanced if we feel that the ‘how’ supports the ‘what’. In Monet, for example, the way the paint is applied suggests the fact that what we actually see when we look at a landscape is light reflected into our eyes. When we experience a van Gogh, we feel the seething passion of his engagement with the world in the energy and rhythm of his brushwork. A 1920’s Léger applies a cubist language to mechanise people as the industrialisation of society picks up pace. 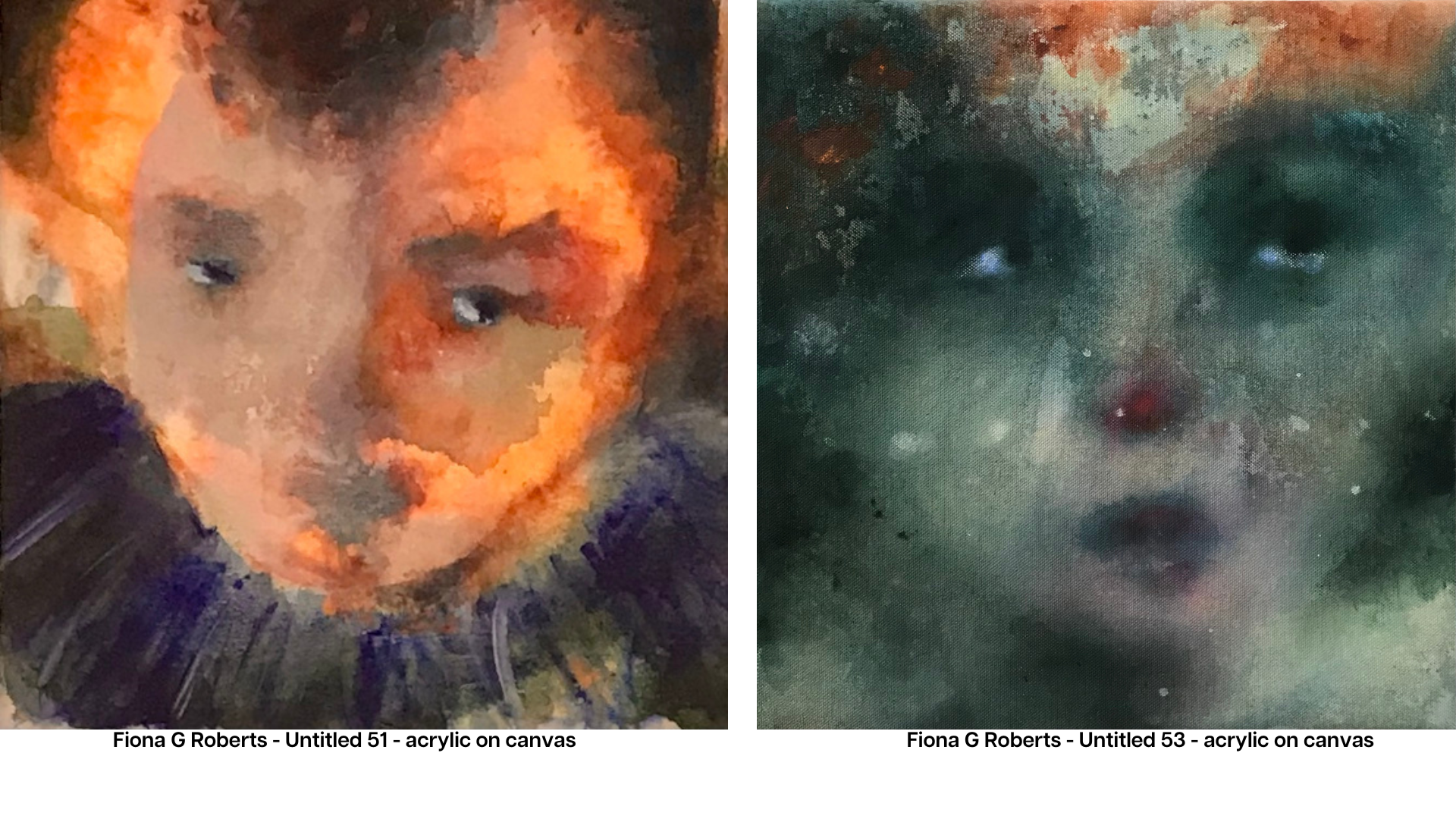 Fiona G Roberts’ paintings aren’t much like Monet, van Gogh or Léger, though they are historically informed and aware. You’re more likely to think of Parmigianino, Edvard Munch or Marlene Dumas. But that to and fro is very much her territory: not only do we enjoy the way her work dances between paint and what it depicts, but the manner of that depiction reinforces what she is dealing with.

Her subject is straightforward: the human head - most often one, usually cropped close to maximise the sense of intimacy. That said, heads are complicated, both inside and outside, and there is a grand and inexhaustible tradition of painting them.  Roberts’ contribution to the tradition becomes a little more complicated when we ask whether they are portraits. On the one hand, they do always start from particular people, whether encountered in life or in found photographs or in other art. They are not – in the manner of, say, Lynette Yiadom-Boakye – imaginary people.  On the other hand, they don’t attempt to look like the person in question, nor to capture the particular inner self beneath appearances. Nor do Roberts’ characters engage with the viewer: where a conventional portrait will often return our look, Roberts’ characters seem to be lost in their own thoughts. There may not be a snappy term for it, but she paints non-portraits of real people. 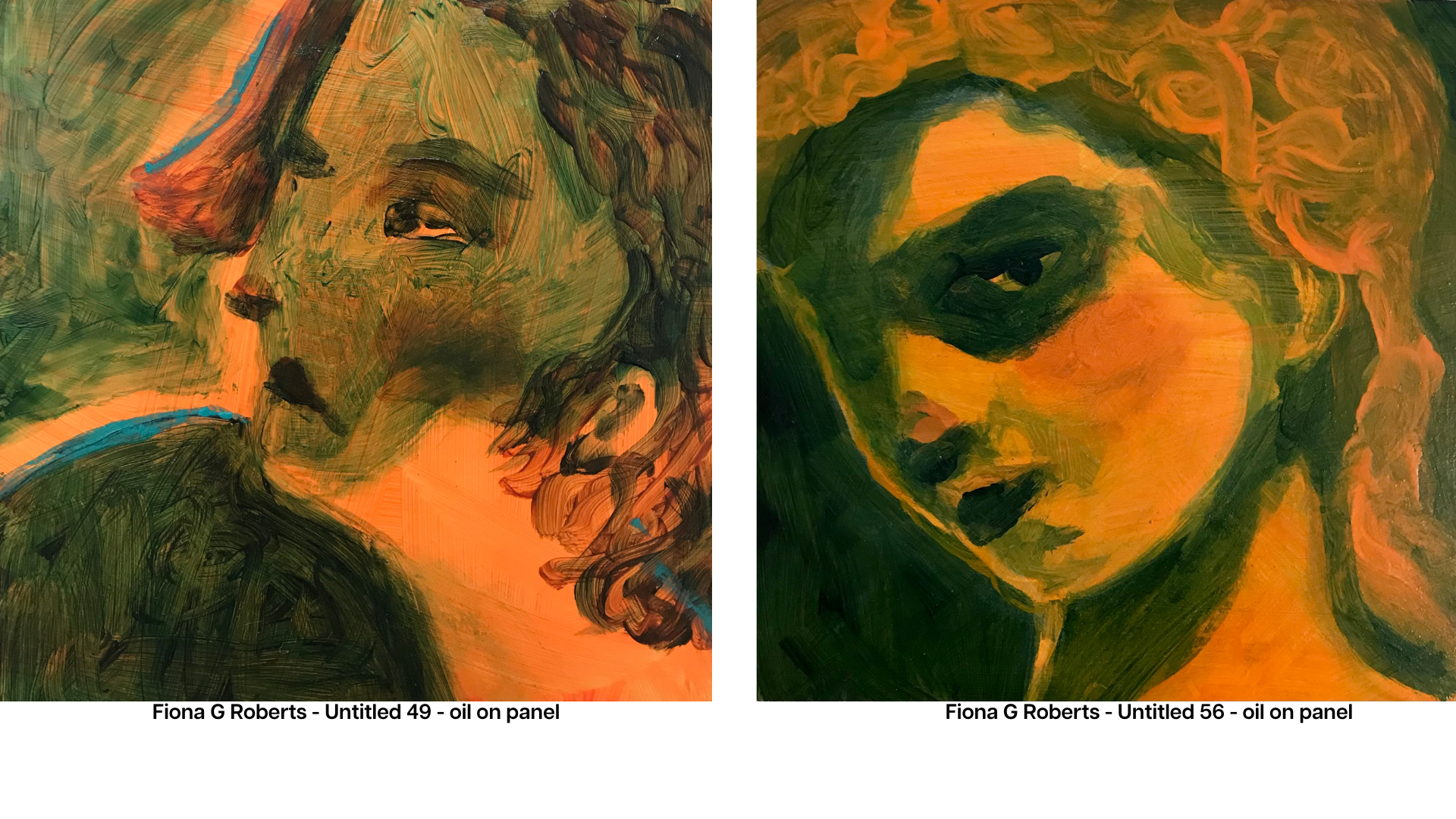 Roberts’ aims in these non-portraits is to evoke the feelings associated with individual and collective experience - it isn’t too surprising to learn that her first degree was in Sociology at the LSE. Consider two paintings from 2019. At the individual level Lucent might be seen as exploring the vulnerability and anxiety of a teenager coming into the world, the uncertainty of form reflecting the uncertainty of mind, a sense that neither the person nor the image is yet fully formed. Collectively,  Love Hurts (147 Women) combines skilful use of the bleeding qualities of ink with a wider implication of blood-letting as it shows – not as portraits, but as representations of their range of age and ethnicity – the sobering number of women killed by men in the UK in one year (most of them knew their killer, hence the title). Those individual and the collective experiences are not separate, of course, but belong on a continuum - ‘the personal is the political’.  And the two come together to poignant effect in Roberts’ latest body of work.

It always rains in the lakes is a series of ‘non-portraits’ of Roberts’ mother, who died recently. They have her red hair, says her daughter, but don’t otherwise resemble her. But Roberts’ mother also stands in for the conditions faced by many women of her era. As Roberts puts it: ‘my mum was an amazing person in so many ways – and very talented in painting and music. But a woman of her generation and class – raised in a farming community in the Lake District, married young to a farmer – didn’t have opportunities such as going to Art College. She never had the chance to develop her talents, and that was a huge sadness for women of her class in that generation’. 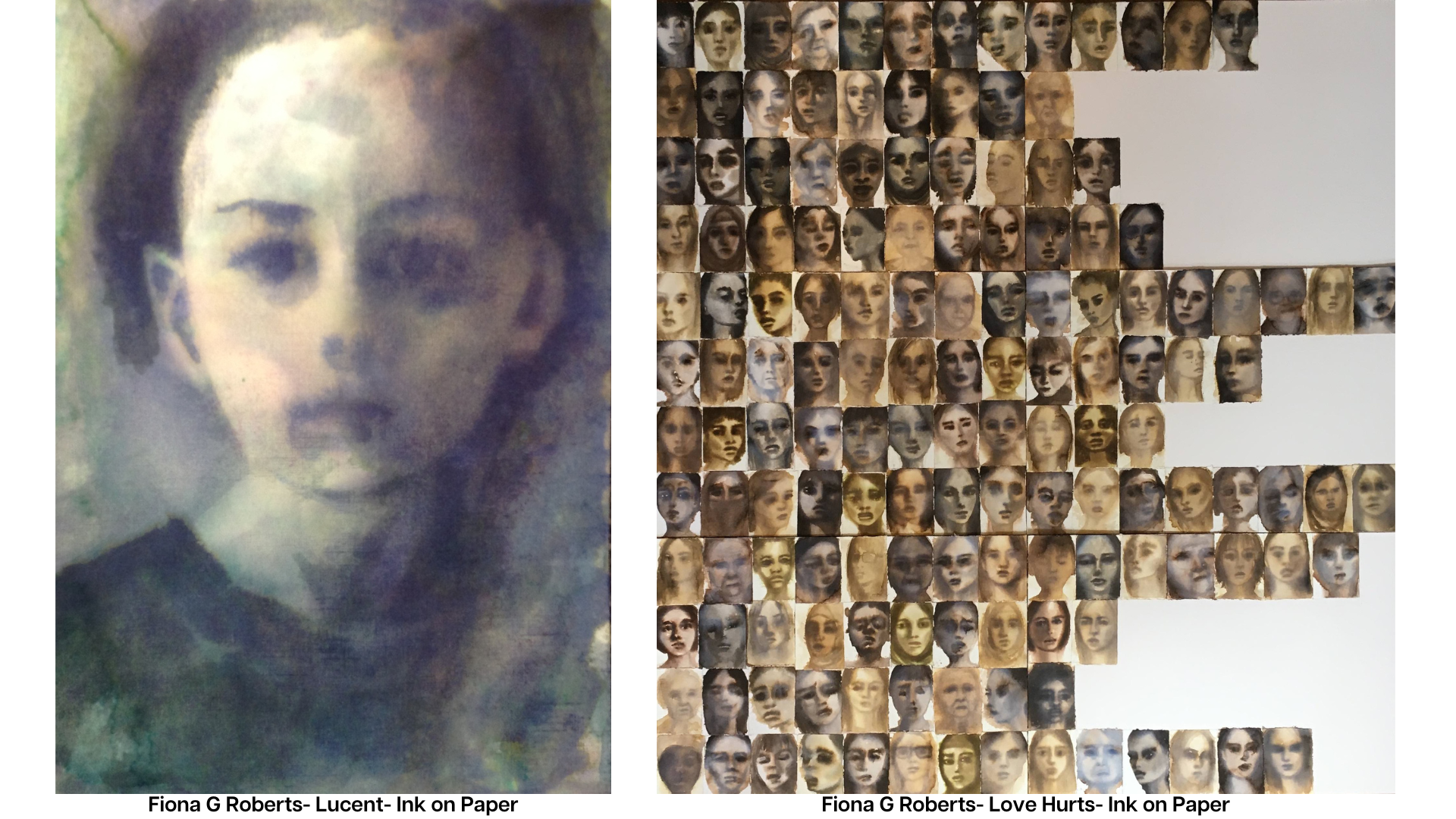 So there is certainly a melancholy – as well as a feminist protest - in the feeling behind this series, and that does come through. The aqueous application of paint or ink suggests the rain of the series title, or tears. But rain is also regenerative, and we can see these faces as celebrations of a life, not simply as memorialising a death or expressing regret for a life that might have been lived differently. That wateriness, then is put to ambiguous ends typical of Roberts: the ‘how’ supports the ‘what’. And there are other ways to read their painterly and somewhat spectral effects. These paintings might relate to memory, and the impossibility of recollecting in full – affectingly so if we know that Roberts’ mother suffered from dementia. They might be about how we can never be completely sure we know the interior world of another person. Moreover, some of these paintings are also patterned with surface irruptions: one might see them as stars, the celestial being very much in accordance with the themes of death, the beyond, the unknown... 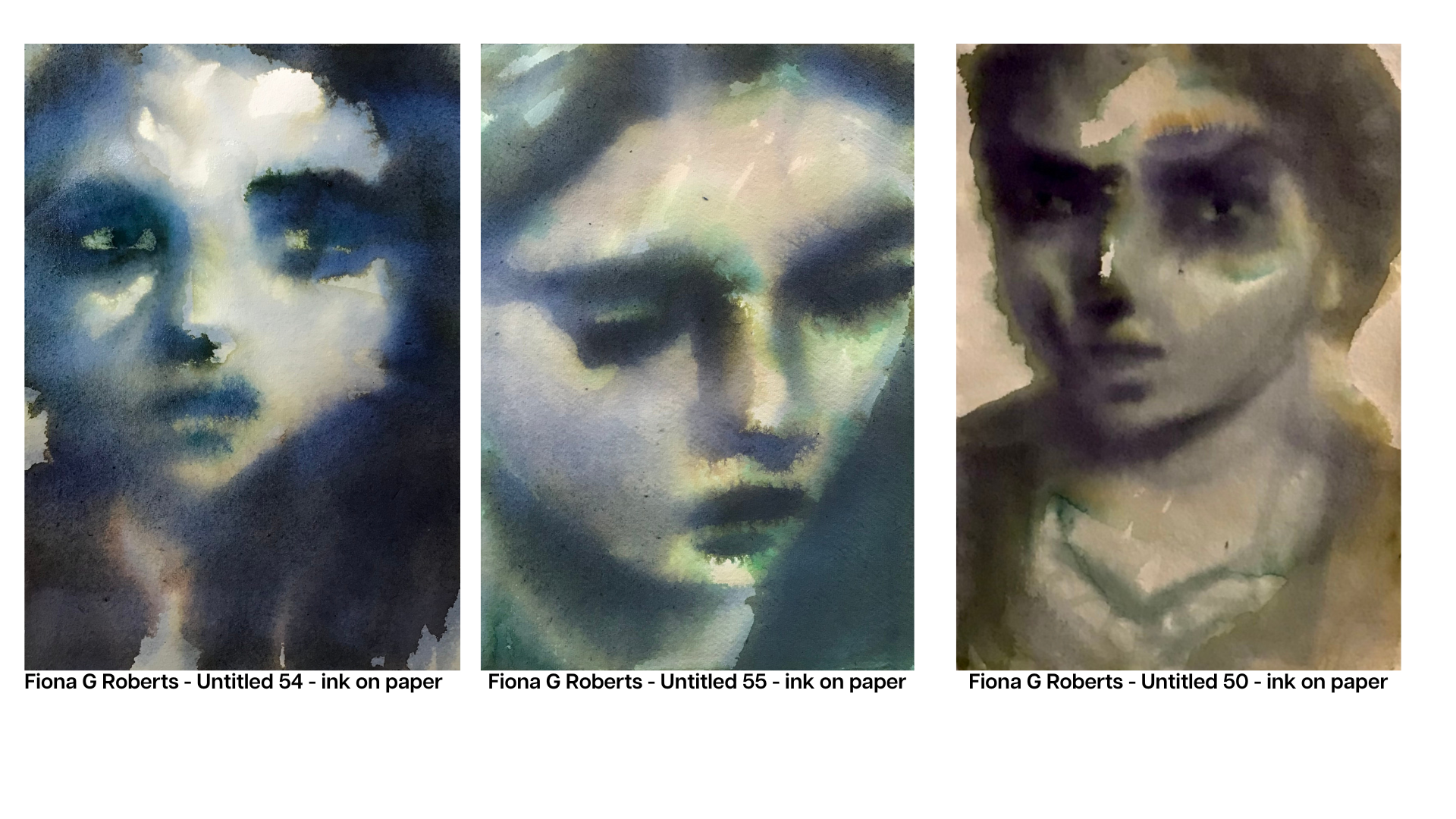 If that sounds rather definite, not so. Roberts’ ambiguous style extends to her meanings. There’s plenty of space for viewers to read the emotional tenor differently: what matters to Roberts is that emotional readings are available. We can see that in the other paintings in the show, which take her approach in slightly different directions. Untitled 51 and 57 have a theatrical aspect. Is that a Shakespearian ruff in the former? Does the latter feature a clown? Perhaps those characters are performing their sadness rather than feeling it. Untitled 59 is a smoker in sunglasses: it could be Roberts’ mother, but acting cool in the style of Warhol.  Helenus looks more thoughtful than melancholy, and the title indicates a mythical dimension: he was a prince described by Homer as the greatest augur of the Trojan War.  And Untitled 38 has two figures, or one figure twice, their interaction open to interpretation. 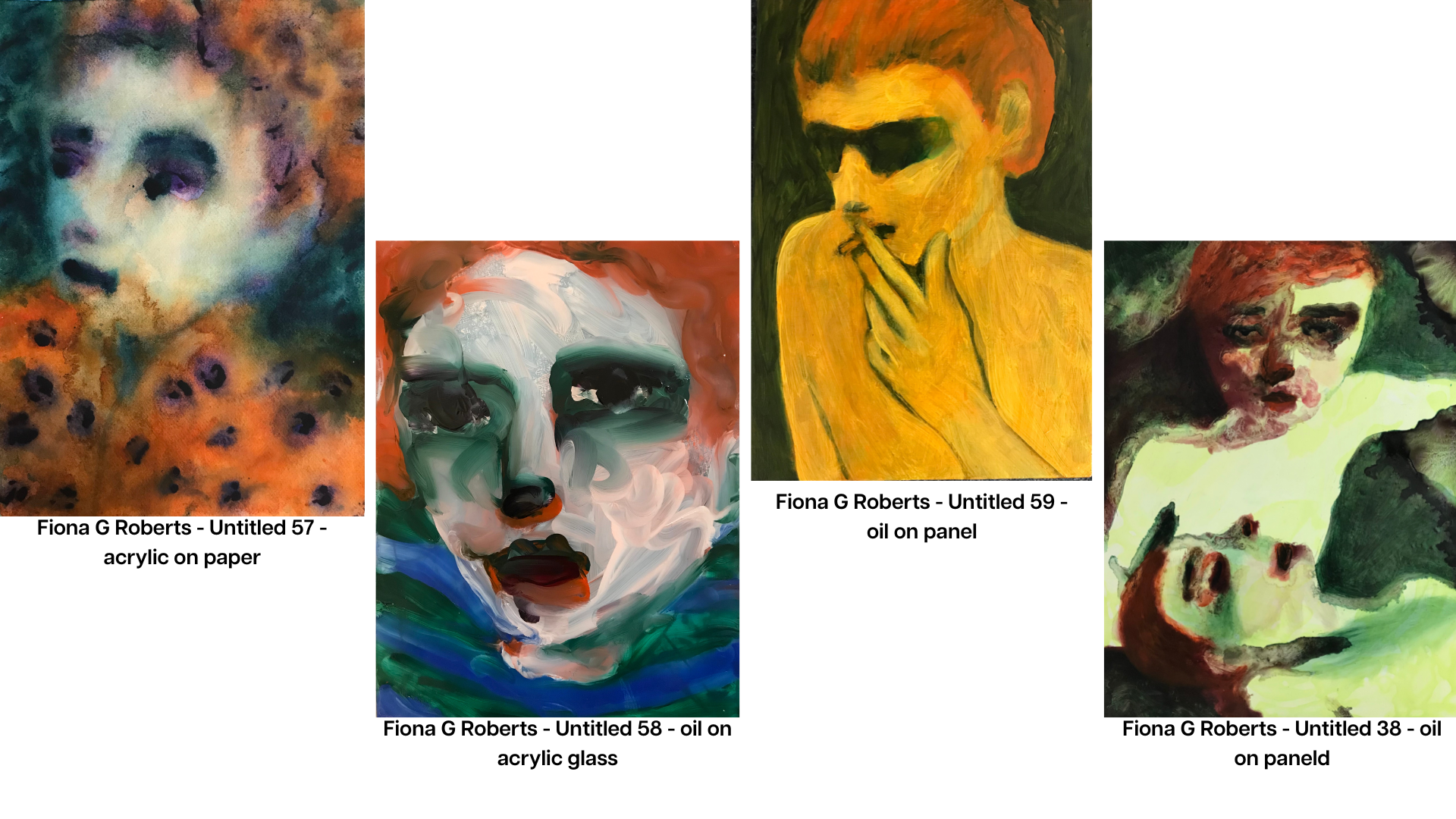 Roberts’ courting of ambiguity is no accident, then, but the way she goes about it does make sophisticated use of what you might call ‘planned accidents’. When working with ink or watercolour, she explains, ‘I spray the ground with water before I start, then spray more as I go – it’s a game of assessing how wet or dry to make it. The exact effects achieved are unrepeatable, which is both exciting and frustrating, but I’ve learned to trust the process.’ Acrylic on canvas operates comparably – spraying with water, putting paint down, wiping it off, letting it dry, making it wet again, deciding which accidents to keep. She sprays oil paint with zest – a non-toxic turps equivalent.  When working on Perspex, wiping fully replaces spraying, and the back can be painted to influence the front. Add the various different ground colours used in this show - yellow, orange, green, bistre, the paper’s white – as well as the choice of palette, and the available effects build up nicely. The formal and emotional range emerging from Roberts’ painting pretty much the same thing turns out to be surprisingly broad. 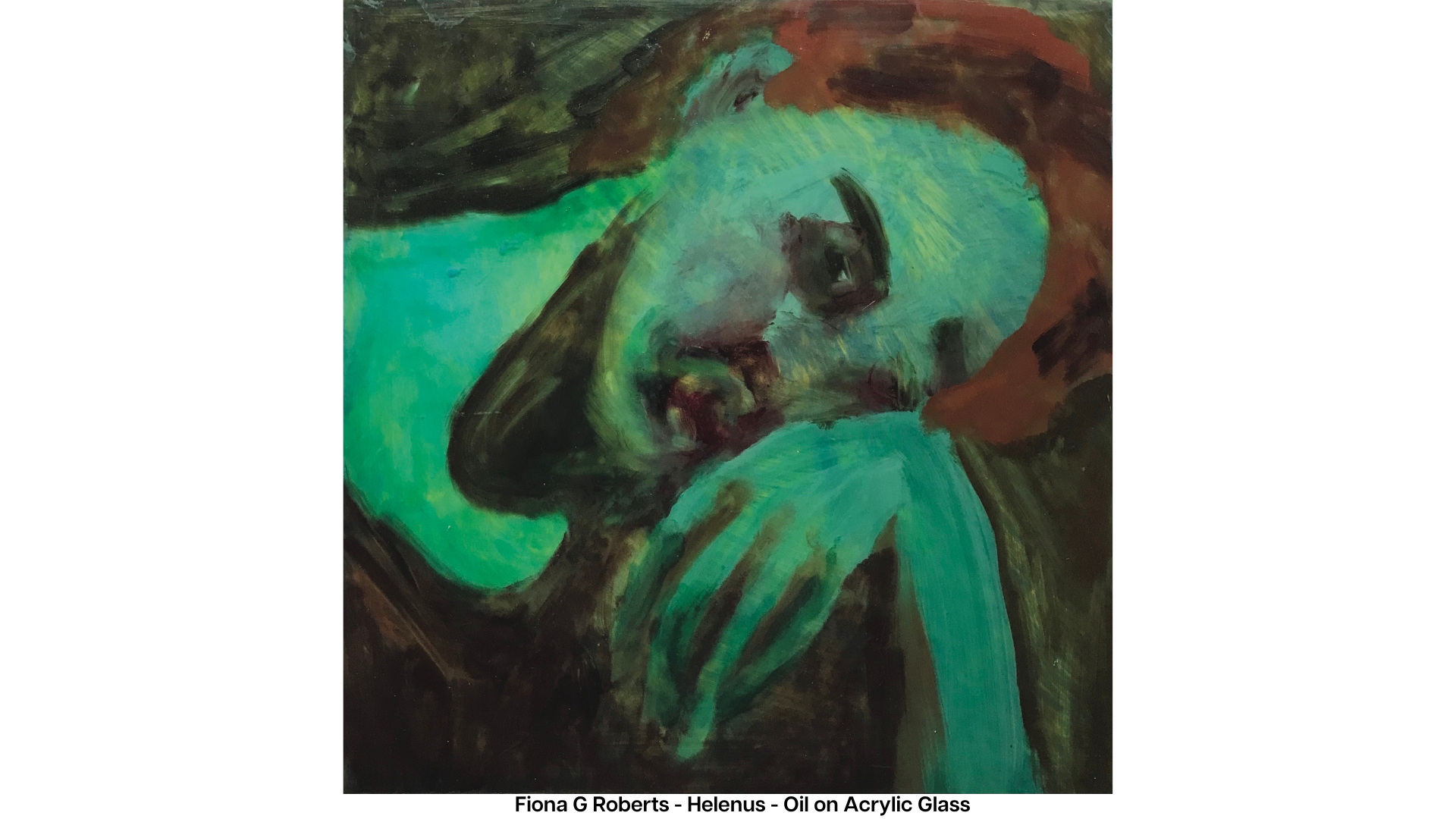